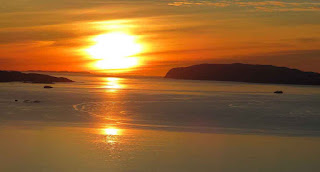 ALL PHOTOS CLICK FULL SCREEN
After the walk out from the bothy near Oban on the Sunday morning we didn't fancy a long day as it was nearing noon by the time we arrived at the hill of choice. Beinn Lora, 1010 feet high. As this is the highest hill on the Benderloch Peninsula, overlooking a large area of sea lochs, scattered islands, beaches, woods and meadows I was really keen to bag this one as well. A new summit for both of us and a cracking walk taking only a couple of hours as it would be dark by 3:30 pm. Sometimes, I just tag along on some of the less scenic hills that are down on a list somewhere with Alex the Bagger, half wishing, occasionally, I was somewhere more spectacular... but not today. 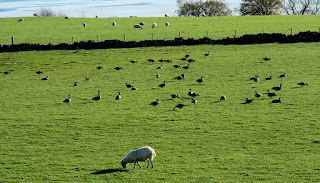 Today all the elements combined perfectly. Cloudless blue skies and sunshine. Heaps of happy wildlife. Canada Geese seen here. And a perfect Sunday summit to enjoy it all on. For it's size Beinn Lora has magnificent views. 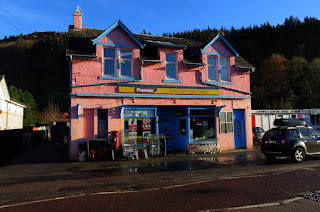 A signposted car park right beside this colourful shop leading up the hill on a good track or an alternative one to the coastline and small local airfield. 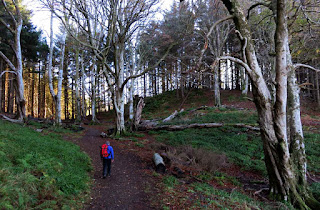 We picked the hill track and after a pleasant well graded ascent through woods we arrived out at the summit. Just below the summit is a boggy flat area but this was not too bad with boots on, crossed by jumping a few tussocks or by well placed duckboards already laid down.Not a problem. 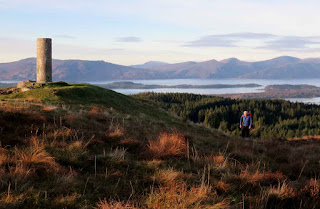 The Summit of Beinn Lora looking North West over Lismore Island and towards Fuar Bheinn, 2511 feet, and Ardgour. 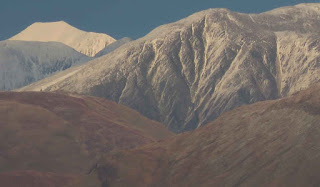 A zoom northwards in the direction of the Ballachulish Munros. 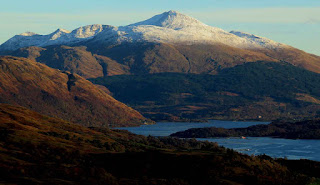 And back south towards Argyll and Beinn Cruachan direction. Winter arrives on the high peaks. 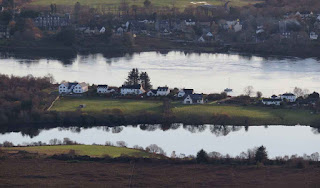 Half Water- Half Land. The Benderloch Region From Beinn Lora. 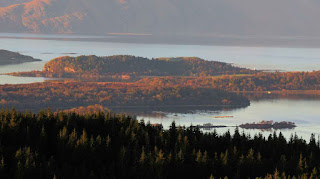 Looking out over Loch Linnhe, a large sea loch studded with islands and boasting Britain's highest mountain, Ben Nevis,1344m, 4'409 feet at its head. 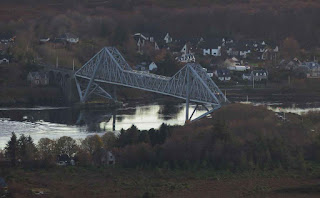 The road bridge at Connel crossing the fast flowing Falls of Lora where Loch Etive drains and fills again each tide through a narrow gap over a shelf of rock creating powerful rapids popular with experienced river kayakers and thrill seeking scuba divers. This used to be a railway bridge on a discontinued line recycled as the main coastal road to Glencoe and Fort William from Oban and Argyll. 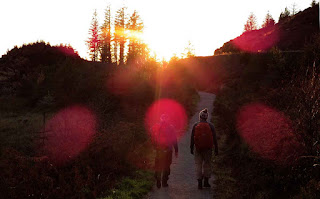 I took this one deliberately at a slight angle to the sun hoping to create a good lens flare "flair" effect. "Like grooovy mannnn." 1960s style photography. Pass the LSD then stare into the sun! Still attempting to paint with photographs in 2015. My rose period. Appropriately, Alex sports a tinted halo here as he was the driving force behind this great weekend, pulling us all together. We met this interesting young guy up the hill who was keen to harvest the fruits of the sea in a business opportunity way. Fresh seaweeds and other edible produce, sourced locally, and seemed very knowledgeable on the subject, having done the groundwork. Quality foods and drinks seem to be on the up and up with a sizable amount of folk willing to shell out for unusual designer food or posh coffee without a quibble. Contrast that with the entertainment industry which has crashed through the floor price-wise with books, films, CDs and DVDs obviously taking a lot longer to produce, often with huge overheads and employing hundreds of people then sold for buttons as the end product.  So...maybe I can afford a big American star as a bodyguard and kindle book promoter in a few years time when they get a break from filming UK TV ads. I also notice that most modern "shopping" malls these days seem to have as many coffee shops, food outlets and snack bars as actual shops in them so maybe this young hill walker has the right idea. 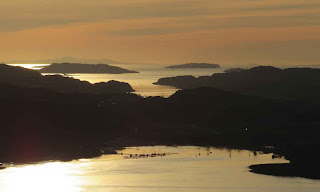 We took our time climbing to the summit as sunset was not that far away and we had a suspicion it might be a good one. As a seasoned sunset taster it had a honey coloured flavour to the afternoon before it even arrived. A combination of air quality, haze, lack of any wind, temperature difference between sea and land and time of year. A view back towards the islands around Oban. 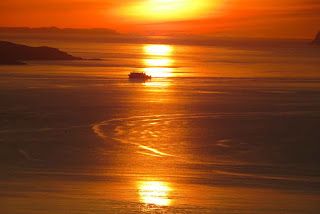 A zoom of the Mull ferry in a molten gold sea, hardly a ripple or a wave, except from passing boats. 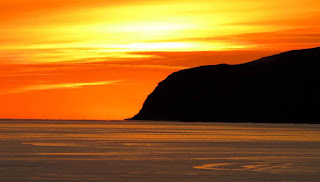 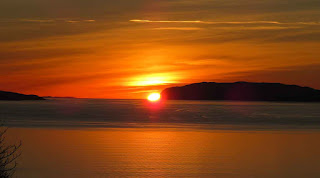 Sun Death on Benderloch. This new camera is a bugger for sun flare... when I don't want it showing up. "Naranja." Could easily be taken for Spain. A memorable end to a great weekend trip. The ocean swallows the orange sun.

Might as well promote my own cup of coffee now. Six years and hundreds of manpower hours to make. Containing a sprinkling of remote Scottish islands; a handful of lesser known sea stacks; obscure but spectacular mountains climbed in all seasons; some unusual poems; a few short stories just for flavouring; scenic Central Belt coastal outings and hills close to Glasgow and Edinburgh... plus 550 original colour photographs. The most lavishly illustrated kindle book on Scotland that's ever been to date... by anyone. A perfect Christmas gift for only £2. 50pence.... or $3.78 dollars.

The Best of Blue Sky Scotland. Adventures off the Beaten Track.... by me.. an ex writer and future coffee shop worker. First four spectacular outings free to view inside this link.

You've got more of those damned yellow/gold/orange sunsets that we never get here! :-( Can you please send us some? We could do with cheering up!

Not sure I know where Benderloch is and pretty sure I've never been there. I'll have to look it up...

Spectacular sunset shots on the sea!

Hi Carol,
Damn and blast! Those pesky orange sunsets keep getting in the way of grey skies up here!
I'm sure you have passed through Benderloch in the car but most folk are not aware of it when they drive past it to more interesting areas stuffed with cloudy Munros :o) A lesser hills, clear skies location, for old folks who like the sun in their retirement.

Gosh, you're really churning out the books! Added to my collection.

Hi Neil,
I really appreciate that. Thank you. I calculate that writing another 50 will just about see me earning a "living wage" :o) Although I've enjoyed producing them it's a lot of nights sitting in front of a computer when I could earn the same amount working for one single day as a year's worth of book sales.Professional authors have my complete respect when even a book as amazing as "In the heart of the Sea." Nathaniel Philbrick, one of the best adventure sea stories ever written is not better known world wide. One of the best books I've read and I'm mentioning it here as a future classic of the highest order.Hope the new film does justice to this incredible book about "The Essex."
My Christmas present to anyone who likes mind blowing but completely true adventure.Unlike my own books this is a genuine classic.