I put the mountain bike in the back and set off as planned to catch the Corran ferry over to Ardgour with a few hills in mind.That was the plan anyway.! By the time I`d negotiated a huge traffic jam at the M80 road works I was getting a bit peeved.After turning onto the A84 Farmer Giles decide to drive from Doune all the way to Tesco in Callender for his Yorkie bar or whatever it is farmers eat of a day.Eight miles behind a fat EEC grant recipient with straw sticking out his hair doing about 15mph without the courtesy to pull over ocassionally had me fuming.Eventually Giles pulled over for his Farmers Weekly and chocolate fix and I managed to get through Callander and up to Loch Lubnaig.Now it was the turn of three French camper vans travelling in convoy to hold everyone up.Made my mind up never to buy French wine again.It shall be rioja all the way from now on

They eventually  pulled over at a layby to photograph each other being eaten alive by midges and normal traffic flow resumed.I was running very late now and the prospect of a long drive back in the dark had me turning my mind to other hills.The last straw was when big plops of rain landed on my windscreen at Lix Toll.Bugger it I thought..I turned right towards Killin instead.

I no longer do rain on the hills and they were hidden in clag around here despite the BBC promising me a suntan.I`ll go up the high Lochan na Lairige road over the shoulder of Ben Lawers I said to myself.I`ll have my breakfast there and if it doesn`t clear up I`ll go for a low level walk in Glen Lyon instead.and seek solace in the best wee scone shop  in Scotland at Bridge of Balgie

There were a couple of guys getting geared up for the hill at the northern end of the loch so I pulled over to ask if they had a recent mountain forecast.It turned out they were a couple of Dutch Munro baggers.Seemingly the Dutch also have great faith in the BBC because one of them had left his waterproof jacket behind on the promise of a sun lashed day on the hills

We chatted away for a while and as we did the weather did indeed lift.Beinn nan Oighreag`s summit cleared on the opposite side of the road and that was good enough to revive my spirits.Rather than taking the quick way up I drove down to the bottom of the glen and went up the north ridge.Managed to get the car into a small parking place on the single track road and crossed the river to the ruins of some old shielings.Looking back over the shielings to the car... 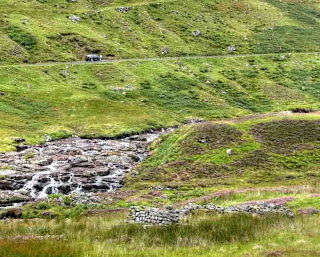 By God it was muggy.To make matters worse the still air meant I was getting plagued by flies...the stupid variety that take no notice of  swattage.Still,this meant that to escape them I made great time up the ridge and on reaching Creag Dhubh a slight breeze sprung up and gave relief.

It was a weird day cloud wise.Over to the east everything was normal but the clouds formations to the west were looking like someone had laid a fuzzy blanket over the sky.


The northern side of the Lawers group to the east... 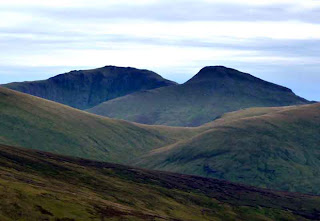 Weird clouds to the west.. 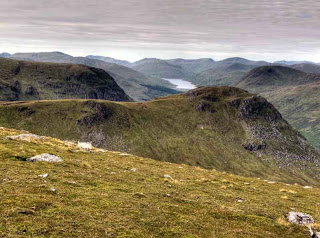 It was tshirt weather on the summit and I took full advantage of this Scottish rarity.I was there for around two hours and even managed a snooze before heading back down the way I came.

21 miles away Buachaille Etive Mor at the entrance to Glencoe was looking good as the skies reverted to a more normal look..


The flies had gone on my return so I sat in the middle of the river and dangled my feet for half an hour trying to get a photo of a dipper that was hanging around. 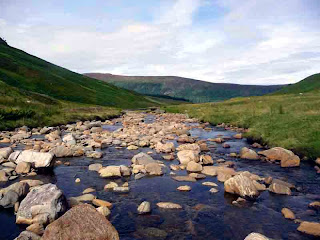