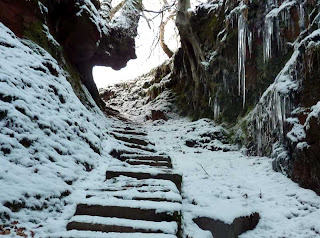 Merry Christmas folks. Great to be back online at last.
Many thanks to Alex for all his excellent extra work on our blog and his help and technical knowledge in saving my back photo collections which seemed doomed when my poor old computer snuffed it without warning.

Mind you, maybe the thought of all those future articles ahead of him spurred him to greater efforts but good guy that he is he`s made sure  I`m back to give him a helping hand again scribble wise. Yer man had the usual family commitments over the festive period so here`s a wee solo effort that turned into  a bit of an adventure. I`m not flush enough to munch a big bite of petrol without a good reason (£50 a fill up, its a joke!!!!) so I stayed local reducing my carbon footprint to a mere patter of tiny paws.

Where to go though. A look at the OS  map of Glasgow sheet 64 produced the answer. Just to the north of Glasgow  on the A809  under the shadow of Dumgoyne lay Finnich Glen.
A narrow twisting gorge hidden in a little  patch of woodland.
Until the access hole in the wall was blocked off this used to be fairly popular with walkers and groups exploring its twisty depths and a few times Alex, myself and others in our club thought of traversing it from end to end with wetsuits and maybe a rope. It's mainly flat with a few small waterfalls but extremely photogenic. Other further away trips normally had priority however and it has stayed on the back burner.

It now sits largely forgotten sunk deep  in an otherwise unassuming patch of land. Surely after two weeks of minus 12 below night time temperatures though the access stream that runs through its depths blocking entry would be frozen stiffy  :0) Maybe it would allow a bold explorer into its slippy slot and accept a happy tramp with crampons.
Anyway it was worth a look. There are two entry points. the blocked off hole beside the road or the lay by just up at the b road junction and across a Field to a low point in the banks. The rear entry.
I made for this! 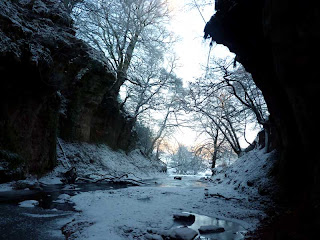 When I arrived it was to find the river indeed stiff. This is the view looking back out from inside.
I crunched off across the ice to claim my prize. Unfortunately though it was not as frozen as I`d hoped and after several crunchy shots at glory tiptoeing across a frozen wonderland and some frantic thrashing by a fat old man still stuffed with turkey over several fallen trees I had to admit defeat. In fact de feet and trousers and socks were rather soggy by this point as I`d crashed through  a few times. Boy was that water cold!
No matter .I  went back, climbed the banks and crunched off towards the middle steps area halfway along which would take me down to the Devil's Pulpit. From here a tricky broken staircase of snow and ice leads down a gully onto the floor of the gorge. 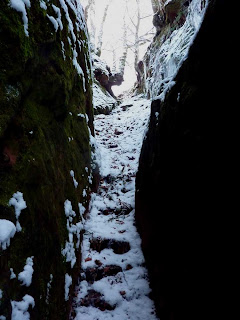 It has an oddly shaped tree guarding the entrance which is only really seen well from below where it resembles a crouching animal from the pages of some ancient bestiary. Best seen in the very top photo.
There is a certain presence down here but I`ve never felt it dark or threatening in any way, just a quiet watch full  stillness,like nature's eyeball on you. Due to the overhangs here this was the first place outdoors I`d visited in two weeks without any snow. Full of colour and hanging curtains of sharp icicles. 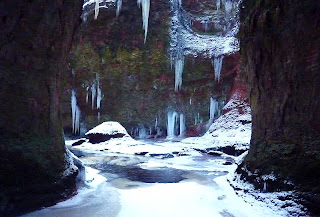 As you can see it was beautiful down here, red walls and deep pools of black water running under the ice.
Like the entry staircase however it required a cautious approach. The stone mushroom ahead is the Devil`s Pulpit  and this is where I headed next.
I set forth, jaggy paws scratching across the groaning ice which just held my weight.
When I reached said mushroom however this was the end of the line. Way too much deep water, steep sides and not enough good ice lay ahead. I did get this photo though. 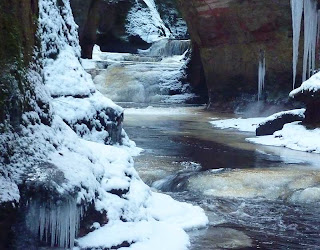 As my wet feet were freezing now I was happy with what I`d attempted. I`d already padded across several stretches of ice above unknown depths just to reach here. I was not going to push my luck. If you came unstuck down here it would be spring before they dug a wee bury pit for the bones. 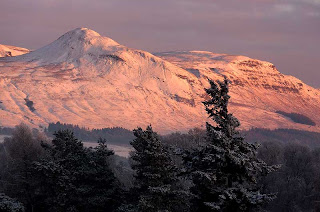 When I came out again the setting sun was just painting the surrounding hills with a reddish glow. Very fitting for the end of a trip into the underworld. 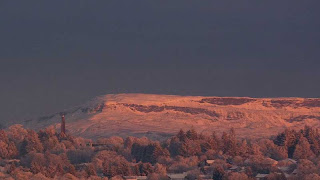 On the way home with a dry pair of socks I stopped off in Drumchapel to see the Christmas lights. They always try to put on a good show here for the community and its nice to end with a bit of sparkle. 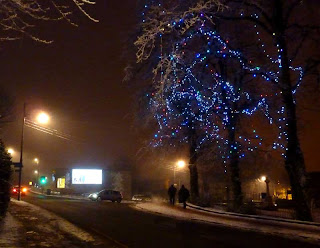 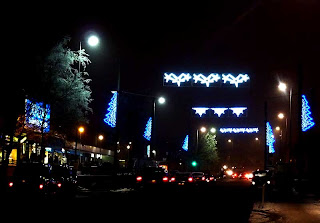 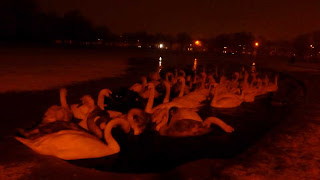 Even fed some swans. Aw! 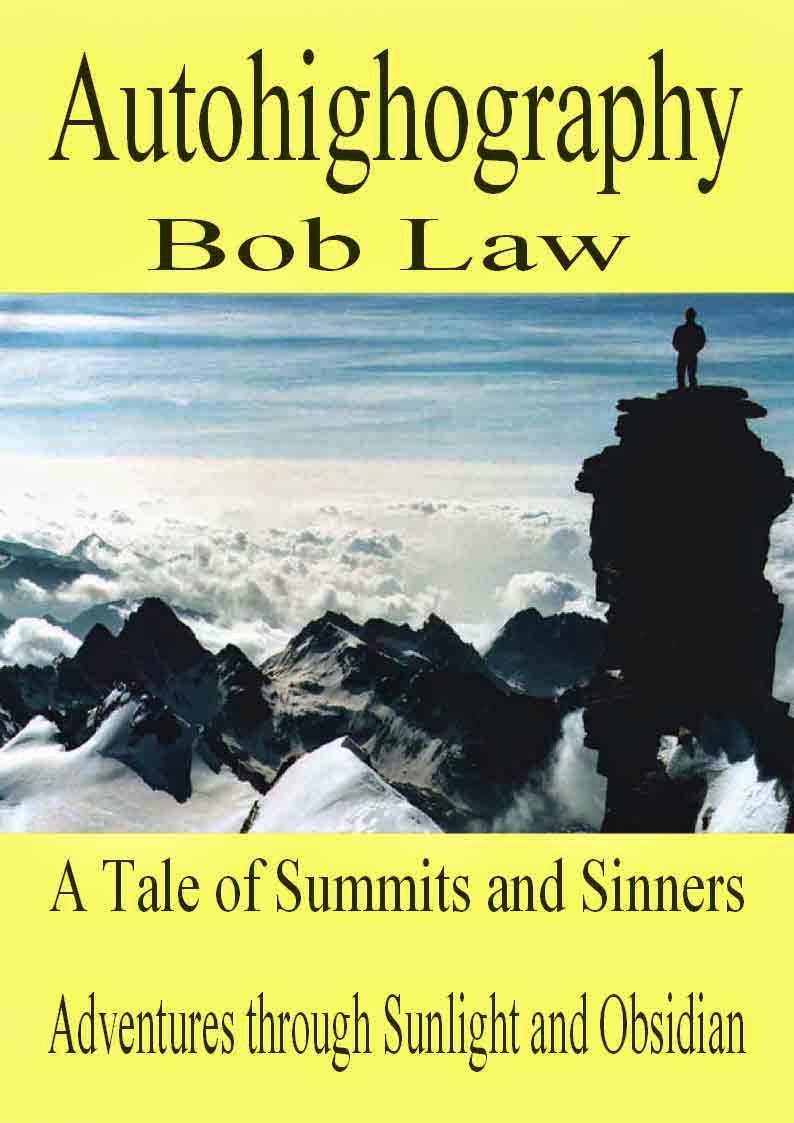 Update. those who liked this story might also like Autohighography by Bob Law. It's my new novel. A humorous tale of a Glasgow hillwalking club and their exploits, love affairs (or lack of them) adventures and mishaps as they explore the high seas, island hop, go caving, and backpack across mountain ranges all over Scotland and the wilder parts of Europe. Fully illustrated with 56 colour photographs which adorn each chapter the first couple of chapters are free to view here by clicking on this link.
http://www.amazon.co.uk/Autohighography-A-Tale-Summits-Sinners-ebook/dp/B00JNAIGAO/ref=sr_1_1?s=digital-text&ie=UTF8&qid=1397745985&sr=1-1&keywords=autohighography.+bob+law 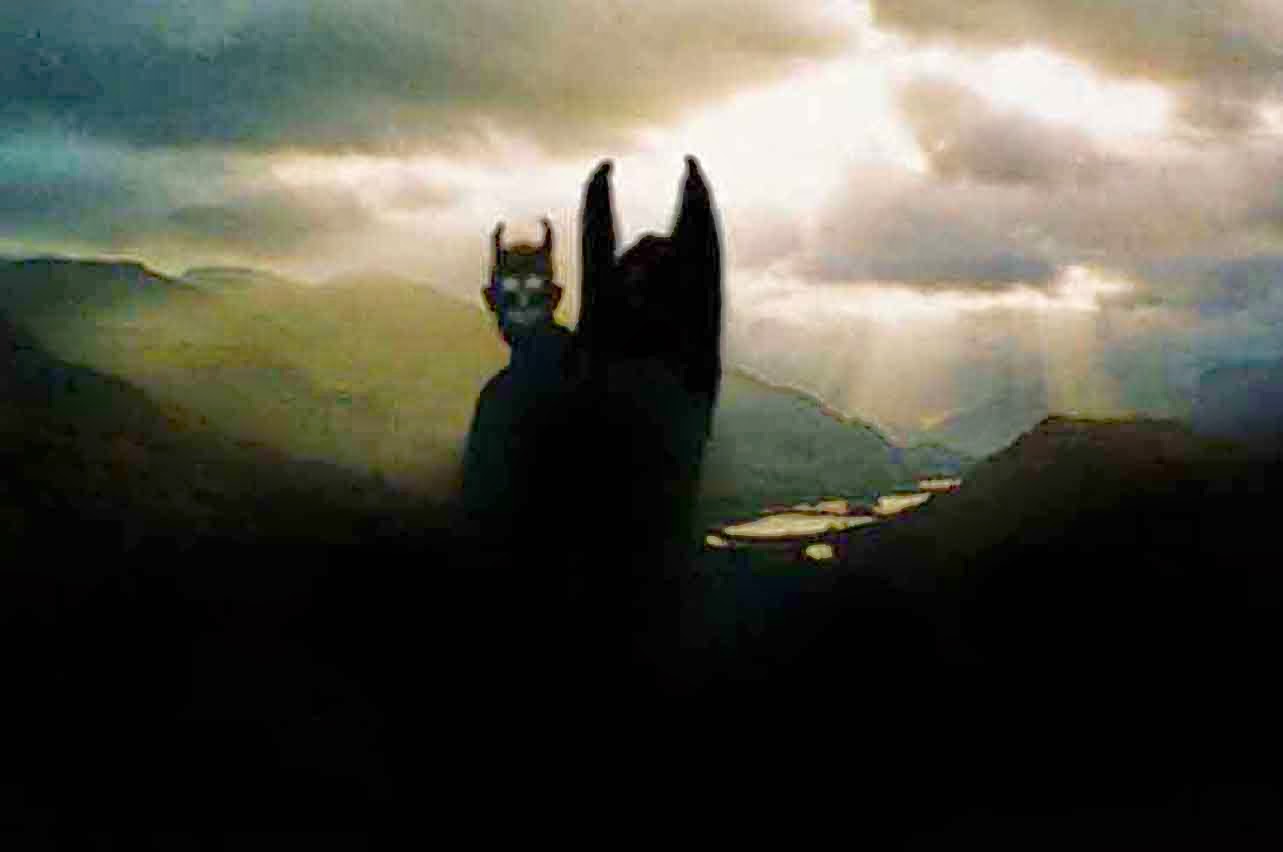 Dark surprises await within.
Posted by blueskyscotland at 15:15

Some swans? Looks like every single swan in the country.

That's a marvellous looking cranny you were exploring there, Bob. I love that wonderful silence, stillness and very particular feeling you get in such places - as you describe. Glad you exercised due caution though.

Cheers Pete.Although its not a very deep gorge(100+feet) its just the right lenght and low grade for a fantastic enjoyable summer or winter(needs more ice though) half day traverse.Looks like your having a good time bagging the more out of the way parts of Europe. Bob.
Ps Merry christmas.

You're a brave man, Bob. - Facing the weather and Auld Nick! As always, great photos. Just wanted to say that since I discovering your Blog a few weeks ago has made it easier to get through these short freezing days. Keep up the good work in the New Year.

Hi Russell.I prefer spring,summer and autumn myself but at least the snow gives something new to photograph.I,ve now got a backlog of ten articles worth of pics! Still to write them up though.Might have to hire a typist with all ten fingers or stop going out.
bob.

I'm having a bit of technological trouble myself here and using borrowed laptop to catch up !!! Nice to see Drunchapel looking so festive my parents live close by in Knightswood, small world, isn't it?

What a fantastic walk Bob. The Devils section looked spectacular. Whatever made you think it was a good idea to go stomping across river ice - too much Christmas sherry (lol). Wish I could have seen the expression on your face with that ice creaking.

Merry Xmas to you both.Typical Alex- he said "hope your not going to post any more of those naff christmas light shots".Little does he know what,s coming up.A Christmas extravaganza.He doesn,t have to look though.Wasnt too bothered about the ice breaking I,ve been in before and no doubt will be in again.Seize the day...or the nearest branch!
Bob.

Good pics of Devil's Pulpit Bob. I've been down there many times esp. as a teenager when I used to cycle out there with my mates, but never in such iced up conditions...cool!

To bigvally.
How do you fancy a club outing in the spring with wetsuits for a full traverse? It,ll be a good laugh.That,s if I survive the winter keeping up with you lot!
bob.