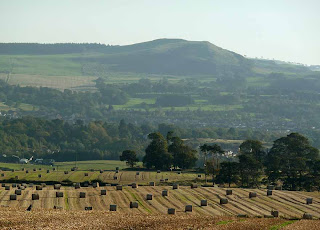 Grangemouth day part two.Read post below first for it to make sense....or not.
I know.The title has put you off already.The mere mention of Bathgate or Broxburn or certain areas in Scotland tend to put people off who know the location...or think they do.Why is that?You can go to so called remote areas up north and be standing in someone else,s waste droppings outside a bothy like I was a few months go.....But that's all right because its wilderness.Its a type of subliminal unintentional snobbery I suspect.You can have a fantastic day,s adventure here of a weekend  after a week,s hard graft in Hall,s pork pie factory in Uphall.And you will need some quality R and R after that.And stand on no ones ouput as you admire the view.This area is civilized This area has flush toilets.
This is a double post.On the same day a mere mile over the first high ridge from Grangemouth you enter a different land.Out of sight out of mind.Cliches are cliches for a reason....most of them ring true.Tellingly,you cant see Grangemouth from here.Its like the difference in the Wizard of Oz between the black and white drab brutality of Kansas farm life and the technicolour beauty of Dorothy,s new end of the rainbow,tornado utopia where her house lands. 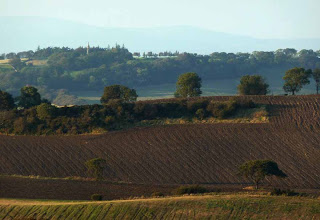 Most people would think of this as beautiful landscape but I did notice that most of the animals and birds  spotted were placed here by man.They did not choose it for themselves.It is ordered.They are fenced in.This is a factory,just as much as Grangemouth.The difference is people find this landscape attractive.But we still use the end product in all sorts of ways.It is all a matter of perception.How we look at things. 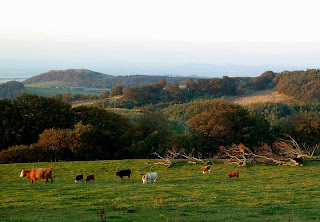 It is an incredible place to wander or cycle through however.Up over the ridges towards Linlithgow I cycled leaving my little furry pals behind me, paws aloft trying to climb the wall.It was late afternoon.I,d timed it well as I love that look of low sun on grass where nature turns almost furry and alive.You can almost see Mother nature take a last  few inhales of warm breath then turn over before the long cold night of darkness ahead. 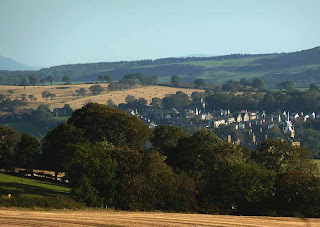 This is Linlithgow.The views around here are exceptional if you like ridge after ridge fading into the distance as I do. 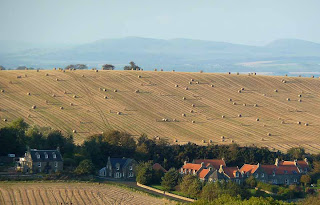 .From here it was up past Riccarton then round to Long Mains.Seen side on like this Binny Craig looked much higher than its real height in the distance. 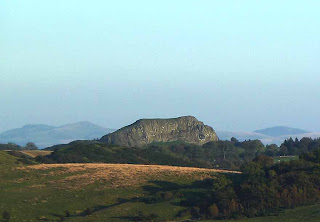 I love lush landscapes like these.You can sink into them like  pillows of happiness. And it was warm.Something of a novelty during this particular summer of 2011.
From here it was easier cycling past mid Tartraven and Cathlaw to Cairnpapple Hill,the highest point around.Another fantastic Bike/ hill climb is to Park At Beecraigs.The circuit of Wester Ochiltree,past Tarhill, up Binny Craig then round to the Winchburgh bings...Up them...then Cairnpapple hill. Then Up Cockleroy to finish.Its an outstanding bike and hill day.An unknown classic yet treasured by the few that,s completed it..
Hats off to them.(Mr Valley,Its a new area for you to bomb round on a bike.Plenty of hill climbs for a  young tiger like you.Lock your bike inside a field below each hill though)
http://www.historic-scotland.gov.uk/index/places/propertyresults/propertyabout.htm?PropID=PL_050&PropName=Cairnpapple%20Hill 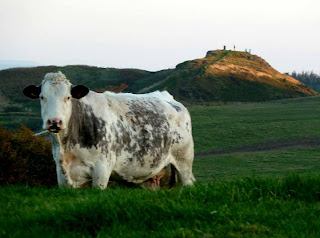 As a more distinguished flabby tiger I panted up the steep narrow road to the small car park under Cairnpapple then wandered up through a field to this Ancient Hilltop burial Ground.There was a bull in this field.Its a  fairly popular tourist walk up here  so I presumed it was a well behaved bull as I would have to pass it. 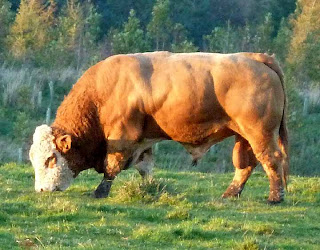 It was.Didn,t even look up.Mind you it had a whole field of cows to get round.It was probably tired out of an evening. 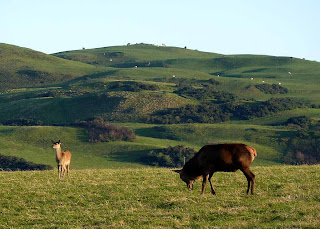 Its such a beautiful landscape here I could happily live in Bathgate,Broxburn,Grangemouth or Bo,ness as long as this was my playground.We don,t value certain areas enough.If this was England it would be an area of outstanding natural beauty and have thousands descending on it.Thank god then we don't and this is only going out to a few like minded people.
Its at its very best in harvest time.Glad I caught it this year as harvest was a short affair due to all the autumn rain. 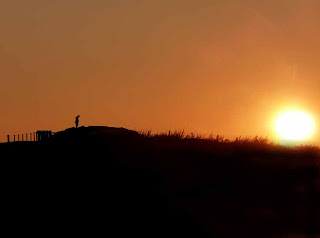 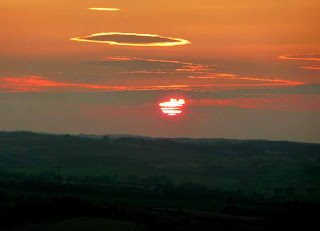 Back to the car at Bo,ness.A knackered but happy peddle hound.Steak Pie supper Takeaway for dinner. Too exhausted to cook or even get out a plate.No wonder that poor bull didn't move much!
Posted by blueskyscotland at 18:01

Love the sunsets Bob.You did well to find a bit of good weather then.
WE better not say too much about areas of national beauty.That lot in Westminster and Holyrood are just as likely to turn the whole country into one great big national park.
Might not be a bad idea though,we don't make much anymore.
I'm surprised that Irn Bru and Tunnocks Caramel Wafers haven't been contracted abroad yet.