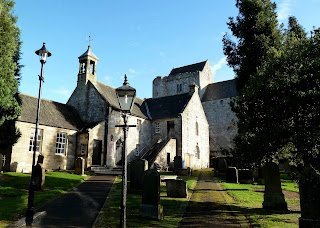 Sometimes you visit a place then something else  interesting comes out of it.My cycle around the Bathgate hills got me thinking about Torphichan Preceptory nearby.I,d been here several times many years ago using Torphichen as a base for cycling trips in the area.When you are young its all go go go without spending much time delving deeper into the history of an area.Well, it certainly was in my case anyway but as you grow older you want to know more about  the district you are in.When I got back this time I looked at the map (Falkirk and West Lothian Sheet 65) and spotted for the first time an improbable route through the Torphichen hills.I didn,t have a clue if it was possible or if I would find it dull or uninspiring or closed to walkers but sometimes just going there and attempting it without any knowledge beforehand brings the best results.In the end it was a great new walk through  rolling,varied scenery.Constantly interesting with a few surprises in store.I had a wonderful day,more so as it was unexpected. 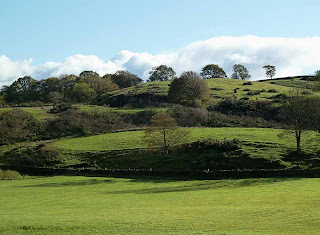 Torphichen Preceptory itself is unique in Scotland.The entire village it sits in is hidden away on its wooded ridge, half forgotten but treasured by those who live there.I knew it was founded by the Knights of St John of Jerusalem in 1140 but other than what I,d read in a quick passing look at the church yard information boards about them that was it.I was younger  then and it was still all go go go.Now, I thought why would they pick here..tucked away in this obscure low hill range in the central belt? It turned out to be one of the most interesting and informative trips yet from a research point of view once I got back and a cracking walk into the bargain on an unknown(to me anyway) right of way public path between Torpichen and Linlithgow over the hills.It was from here and only one other place in the UK( London) the Knights  regrouped and operated from an organisation originally founded to protect pilgrims going to the holy lands.Although  set up as warrior monks similar to the feared Knights Templar and the Knights Teutonic(a German Order) they were also involved from the outset in caring for the poor, sick and injured.These three groups were the SAS of their day,highly equipped ,well trained and motivated by religious certainty.They would charge on their heavy horses into the gathered ranks of the enemy army like a thunderclap from god himself.Self doubt and fear didn,t appear much on these guys menu.(Remember the Black Knight in Monty Python who gets his limbs hacked off one by one yet  still refuses to stop fighting and surrender when he,s  down to just a torso and a head.) However they also helped set up the first Cheques,Banks, and Multinational companies.The Knights of St John fared better than the Templars who made the usual mistake of growing too powerful and attracting the attention of a worried King.The Knights of St John survived however, gained former Templar lands as here and after many changes and adaptations to the political landscape of the times they are now  better known today as the St John,s Ambulance.You couldnt make it up!
Full fascinating account of all three groups here.Look under DECLINE paragraph for Knights Hospitaller(Knights of St John)Amazing stuff.Torphichen Preceptory is also here under SEE ALSO. in Knights Hospitaller page..http://en.wikipedia.org/wiki/History_of_the_Knights_Templar 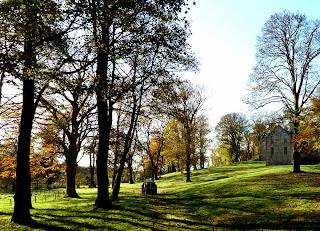 The Path I followed after leaving the village took me north to Craigland on a minor road then followed a rough track East  through splendid autumnal woods past  the still standing remains of an ancient tower(marked on map).A wooden sign beyond pointed uphill north under the bulk of Cockleroy and you could easily climb this hill  from here if you haven't done it then come out at the car park but as I,d been up it too many times I followed the track down to a field  instead where it petered out.The right of way path was between Torphichen and Linlithgow but I wanted a circular route so veered east towards a small round dam.This was inspected(Family of swans and a bunch of Jays) then passed  to reach the road.I then snaked up through Beecraigs forest trails(if you don,t know these best to stick to the yellow tarmac road) then came out higher up near the road at wardlaw. 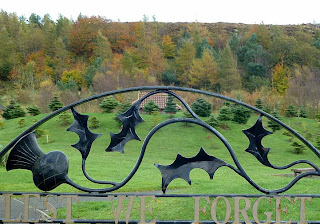 The Korean War Memorial is here with its lay by parking bays.I,ve passed this many times and to be honest it didn't look worthwhile stopping.How wrong can you be.A lovely landscaped little garden and shrine to the people and nations that served in the Korean War(1950-1953) and a path up the side of Witchcraig hill which turned out to be a fantastic viewpoint over a wide area. 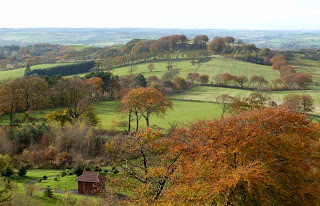 The shrine is below.This also gives you an idea of the scenery involved on this walk.Not that high but stunningly beautiful rolling hills.And so quiet with most outdoor  folk busy on the greater ranges instead.I could actually see the northern edge of the highlands from here plastered with fresh snow but I didn,t fancy swapping places, no doubt a penetrating bitter wind up there on those heights.Here I could still feel as if I was in summer mode  in the more sheltered glades ,warm and safe from the cold wind in bright sunshine.Winter will come soon enough...I,m in no hurry to rush into it just yet. 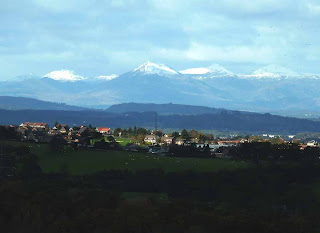 Also up here is a very strange object.I knew it immediately as a cross of Lorraine same as the one that sits above Greenock but I didn't have a clue what it was for til I returned and looked it up.Its a refuge stone. 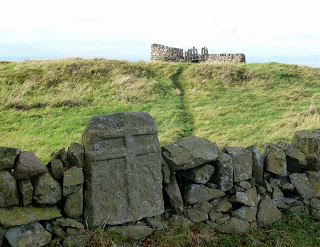 There is a ring of them sitting in the landscape an old Scots mile out From Torphichen.In the days of The Knights of St John anyone in trouble reaching the safety of this ring would be safe from retribution for any ill deeds they might have done.Mind you no doubt the good knights would ask for something in return.There,s always a catch somewhere :)  From here a grassy trail leads along a mini rock escarpment  in the direction of Cairnpapple Hill which you could also do as part of this walk.I however descended to pick up the road again as I was going back via gormyre and that minor tarmac ribbon.As it was overhung  most of the way with shimmering dappled beech leaves it was a joy to walk.I got mobbed by some rooks on Witchcraig Hill Escarpment.Unusual in that they treated me more like a fox or raptor than a human who might have a gun and came fairly close,repeatedly circling above me before deciding I was OK after all.I didnt mind this at all.It was great for photographs. 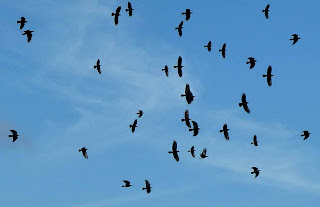 A very interesting walk with bags of wildlife.Even seen a stoat and a Kingfisher.Too fast to get pictures though.Tricky wee buggers to capture as a chance face to face meeting like this.You need to set it up then lie still for hours...waiting.....thats not  for me.
Back at the car I still had enough time before it got dark to drive to Linlithgow and park there to walk round its loch.I,d seen it sparkling in the distance of course from the hills so I just had to pay it another visit.Its such a great  area for views and photography. 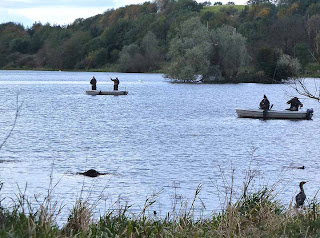 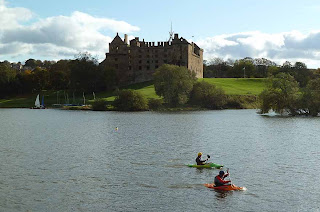 and buckets of history as well.Mary Queen of Scots birthplace.Linlithgow Palace. 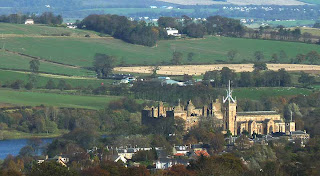 Fascinating. An area I know nothing about and have never visited despite it being not too far away. Another one to be added to my list of walks to do one day (soon!)...

Been to various bits and pieces you mention like the Korean War Memorial, but I've never wandered around Torphichen itself. The territory you were on was just over "the border" work wise, so I never got to know these roads like those a couple of miles to the west.

Well researched. Now you can have a wee look at the Knights Templar in the Denny area (lol).

Hi Ken.
The last month has been better for weather than the entire summer.I,ve been over your way a lot on my bike recently,hardly used it at all during the summer months!

Great post Bob,I always think that those who died in the Korean War don't get the same recognition as the larger or more recent conflicts so it's good to know there's this memorial.
When I was exiled down south there was a spring known as Templar's Bath at Bottesford. Nothing else remains,but history shows a preceptory there.I remember reading a book set in Palestine (can't recall the name or the author)of the exploits of the Templars,and these guys were superhuman.

Hi Bob, thanks for that. If the weather's good we may venture that way on the w/e of 26th/27th Nov to coincide with the Historic Scotland free entry event and include a visit to the palace...

You can include me in that Jim.I didn,t know that much about the Korean war before visiting here and was very surprised by the number of countries involved in the fighting.They are supposed to be building a new memorial shrine soon so hopefully it will be as nice as the old one which is small and basic but all the more touching because of that.
bob.

Spoke to you on the Dalmeny estate beginning of november. Went over to Fife and did a circular walk from Aberdour to Pettycur along the coastal walk and then back over the Binn. Great walk with superb views on a lovely sunny day!! Spotted 2 Red Admirals at the top of the Binn - butterflies in November is a barometer of the recent good weather.

Hi Hunter.
It was Nice to run into you over on the East Coast.The Binn is a great wee viewpoint for its size.
Best Wishes.
Bob.

Cheers Bob, nice to speak to you! Torphichen looks interesting so might go there soon for a walk......been to Beecraigs many times and enjoy it there so may combine that with walk to Torphicen area. Weather over on east coast still nice and mild with good sunny spells so long may it continue! PS-where is the place overlooking the sea on first page of website? Dont recognise it. Enjoying the website and the blog.
All the best

Hi Hunter.
Its the singing sands beach on Eigg.June or July 2010 post.