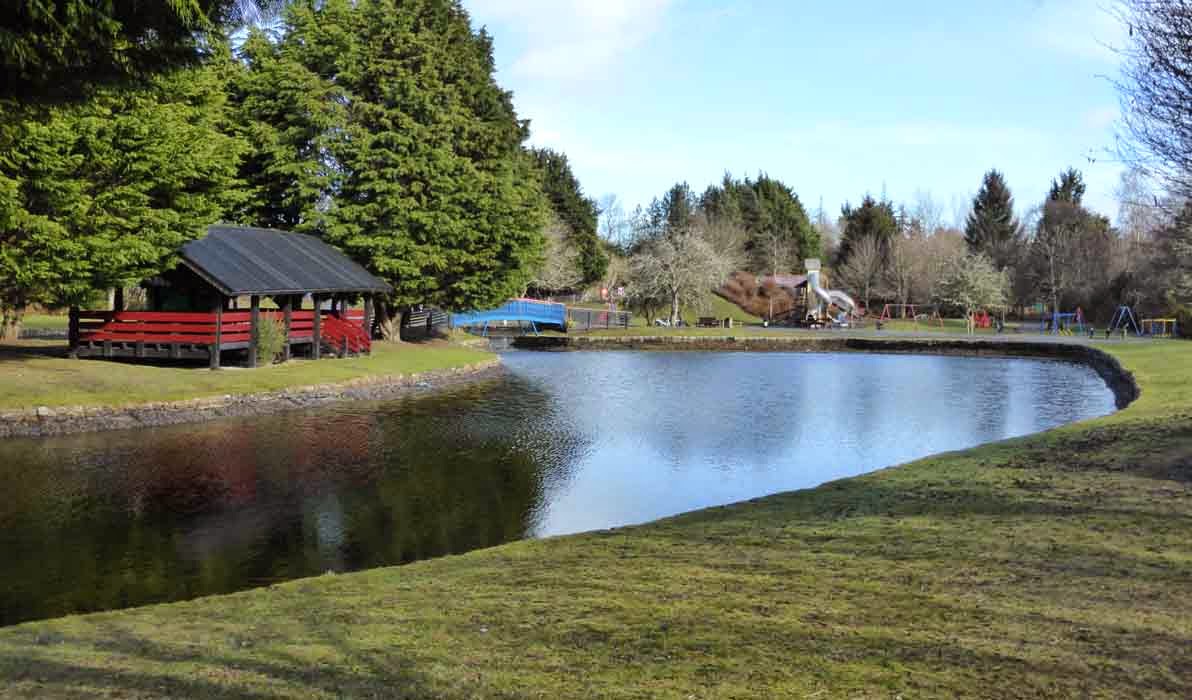 ALL PHOTOS CLICK FULL SCREEN
After an overnight stay on the Black Isle with our convivial hosts B and M, Alex and John were up early to bag another isolated Corbett. As the weather was even worse than the day before with rain, frequent snow showers, dark clouds and high winds over the mountains I elected to do a sunny coastal walk with the elusive M around Cromarty instead.(see first Northern Gothic post.)
Around lunch time my hosts kindly dropped me off in Inverness as they were going there anyway and I fancied a comprehensive city tour of the Highland Capital. I love city explorations (especially when it's grim on the mountain tops.) Above is Whin Park, a lovely area packed with interesting features like an extensive children's adventure playground, various colourful public shelters, ponds and a miniature railway running in summer. This area is situated near the city centre and lies very close to the River Ness so it's prone to flooding. The Caledonian Canal sits on one side of the park with the river on the other so winter flooding seems to be a regular occurrence now. Hope the miniature railway survives.
http://www.miniaturerailwayworld.co.uk/NessIslands.html  Pretty unique little railway this far north and a firm favourite with families. 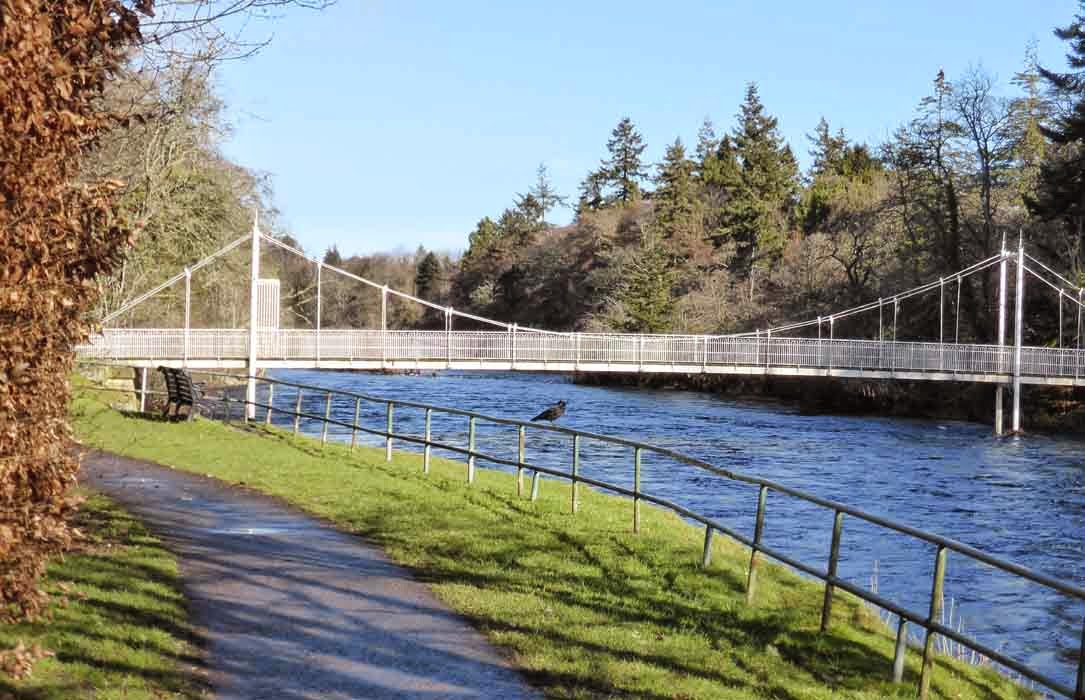 I stayed briefly in this area around the Black Isle and Strathpeffer during the late 1970s- early 1980s and remembered Inverness and the walk round the islands well. The River Ness, the Ness islands and Whin park are the jewels in the crown of this northern city. Several ornate iron bridges span the fast flowing River Ness, connecting up the wooded islands in mid stream and a further bridge leads to the opposite bank.
A well made walking trail runs though them with good views and they are just as pretty as I remembered them. 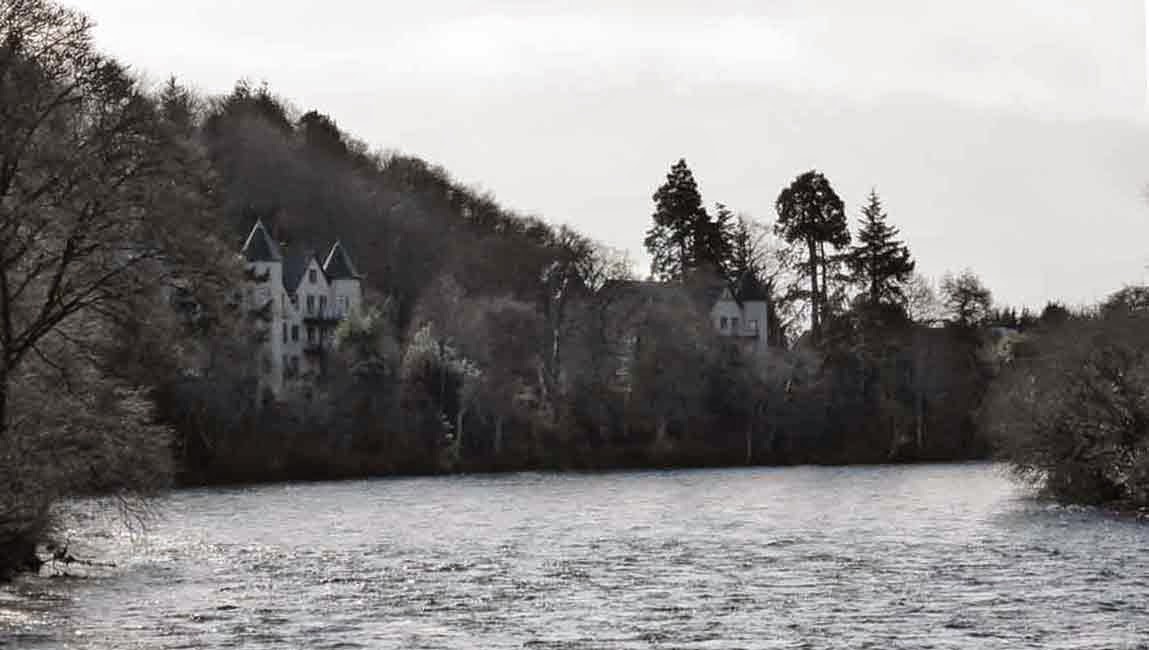 View upstream from the islands. 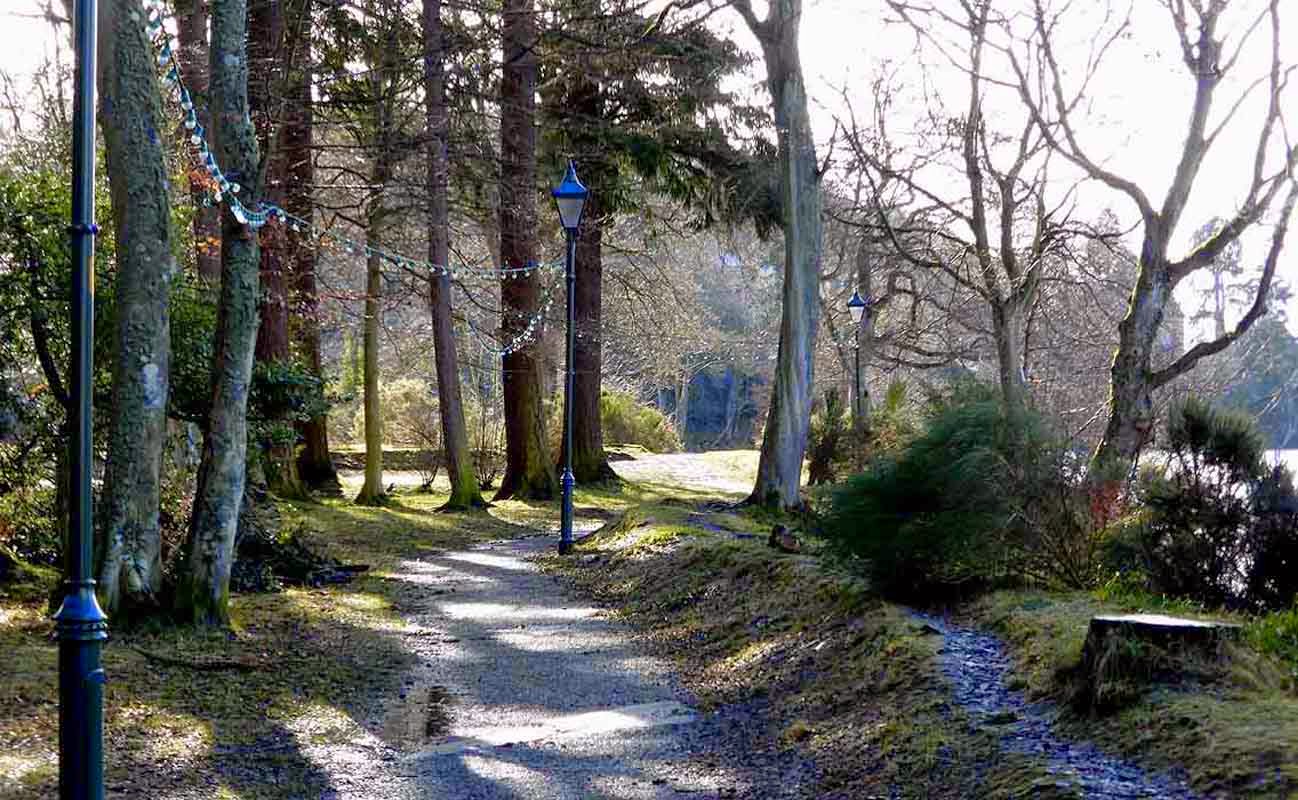 Path on the Ness islands. The bulbs would indicate that they are lit at night during special events although the recent floods may have knackered them. 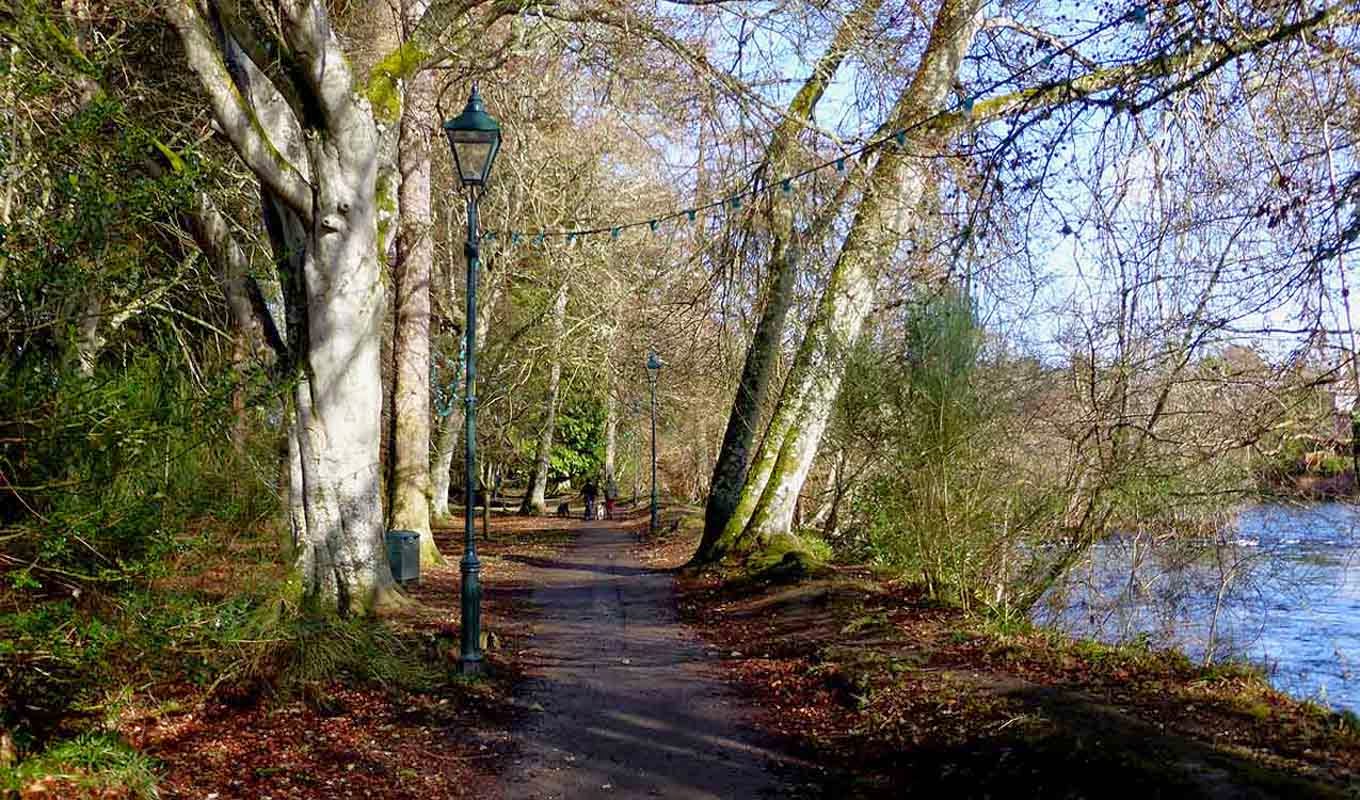 From here I continued up- river to where the River Ness and the Caledonian Canal almost join at a large weir across the river. At this point a heavy rain storm approached from the north and as there was little shelter on the open banks of the canal I scurried back towards the warm embrace of the city. 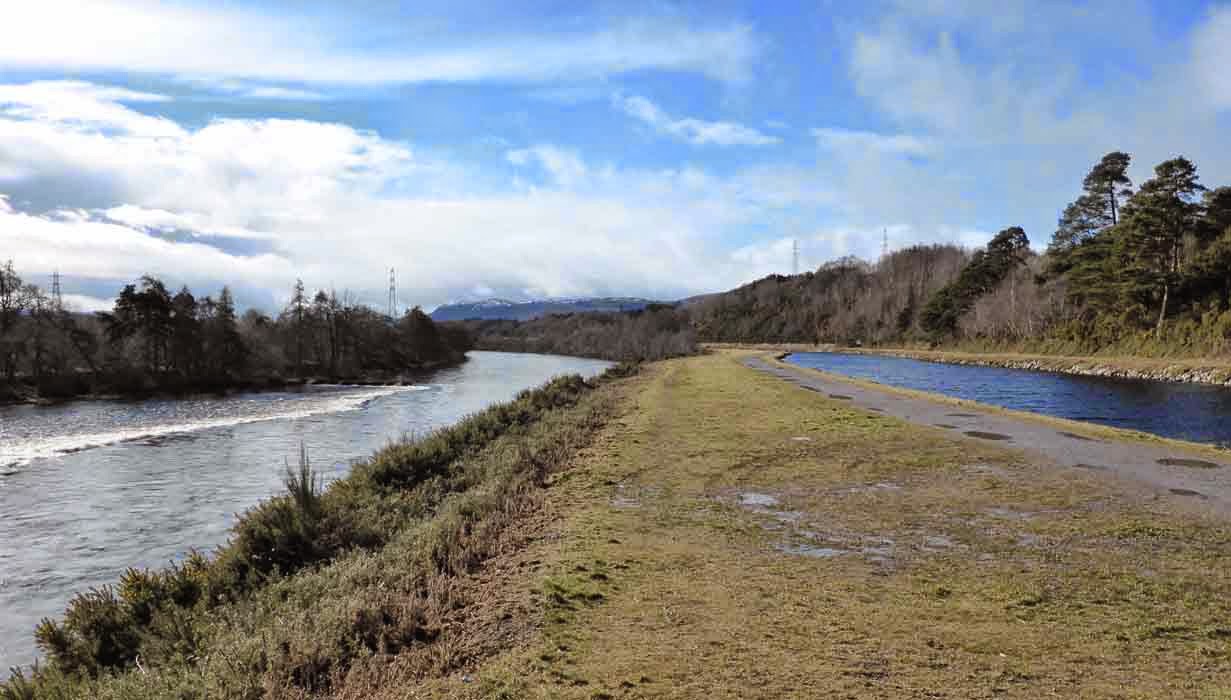 http://www.explore-inverness.com/what-to-do/outdoors/ness-island-walk/  Good Inverness Map and Ness islands walk here.
Bellfield Park was my next port of call just as the first drops started then I crossed another bridge to visit St Andrew's Cathedral, The most northerly cathedral in the British Isles. 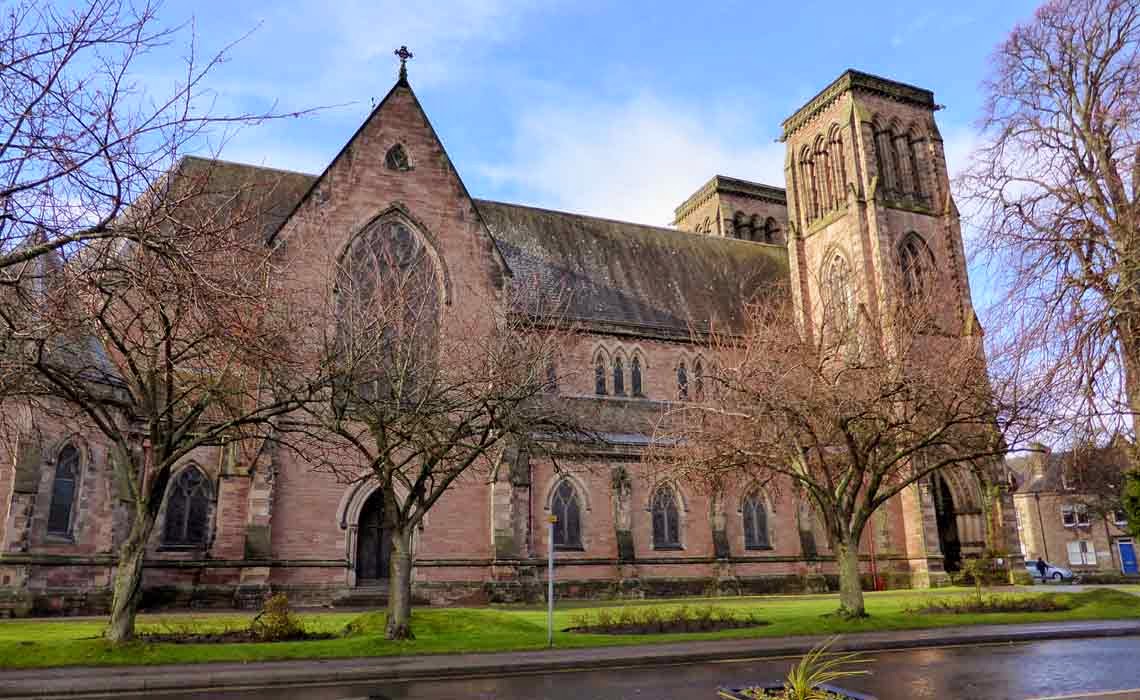 A large, squat, almost square building but beautiful inside. I neatly avoided a heavy shower by ducking within its massive wooden doors. 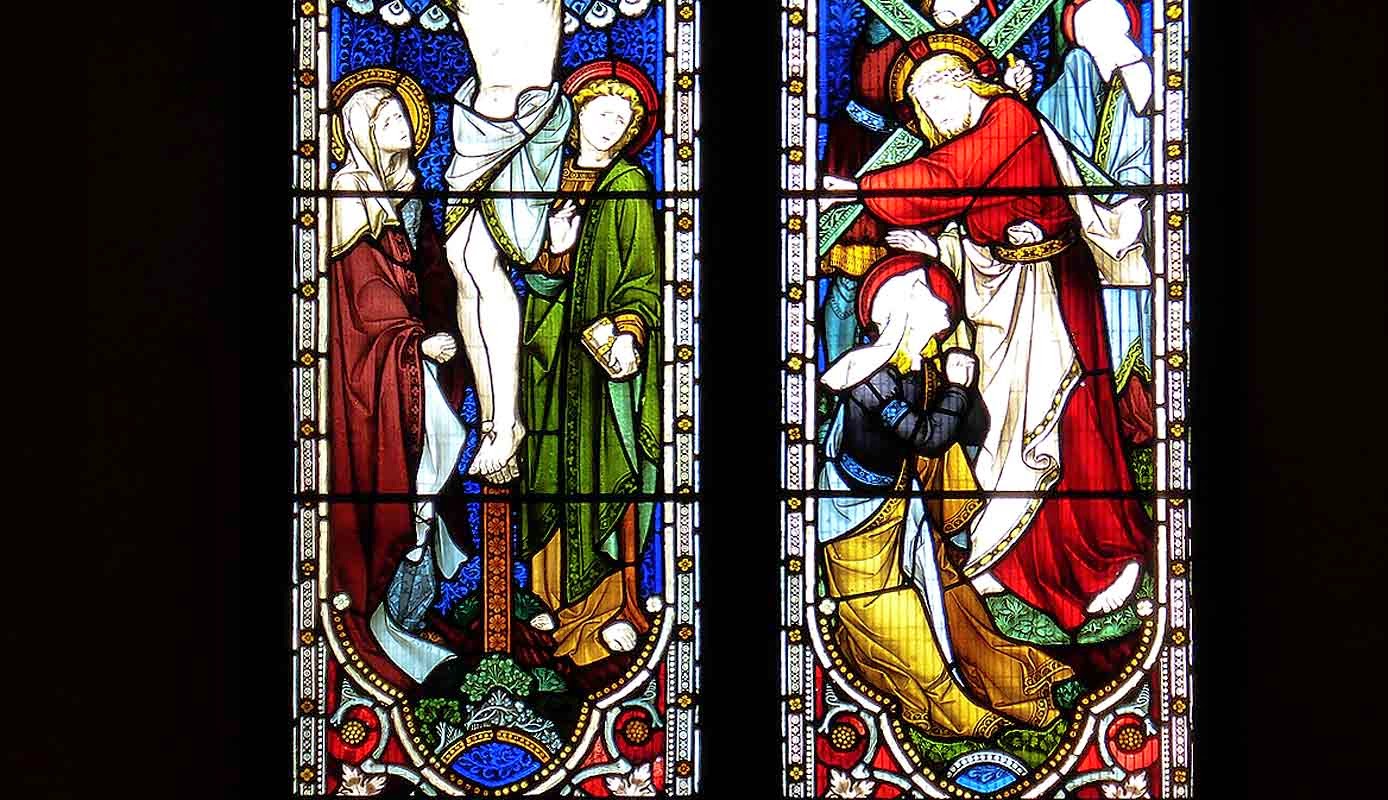 Jesus on a famous walking tour of his own. 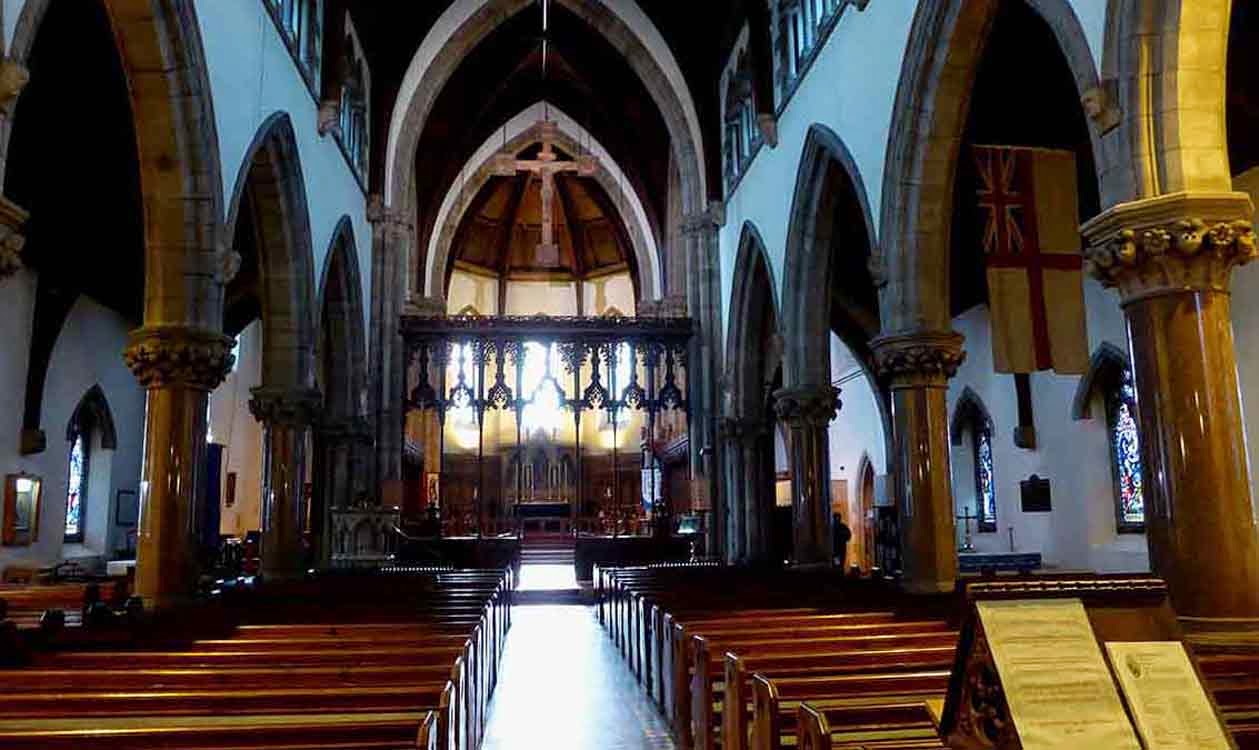 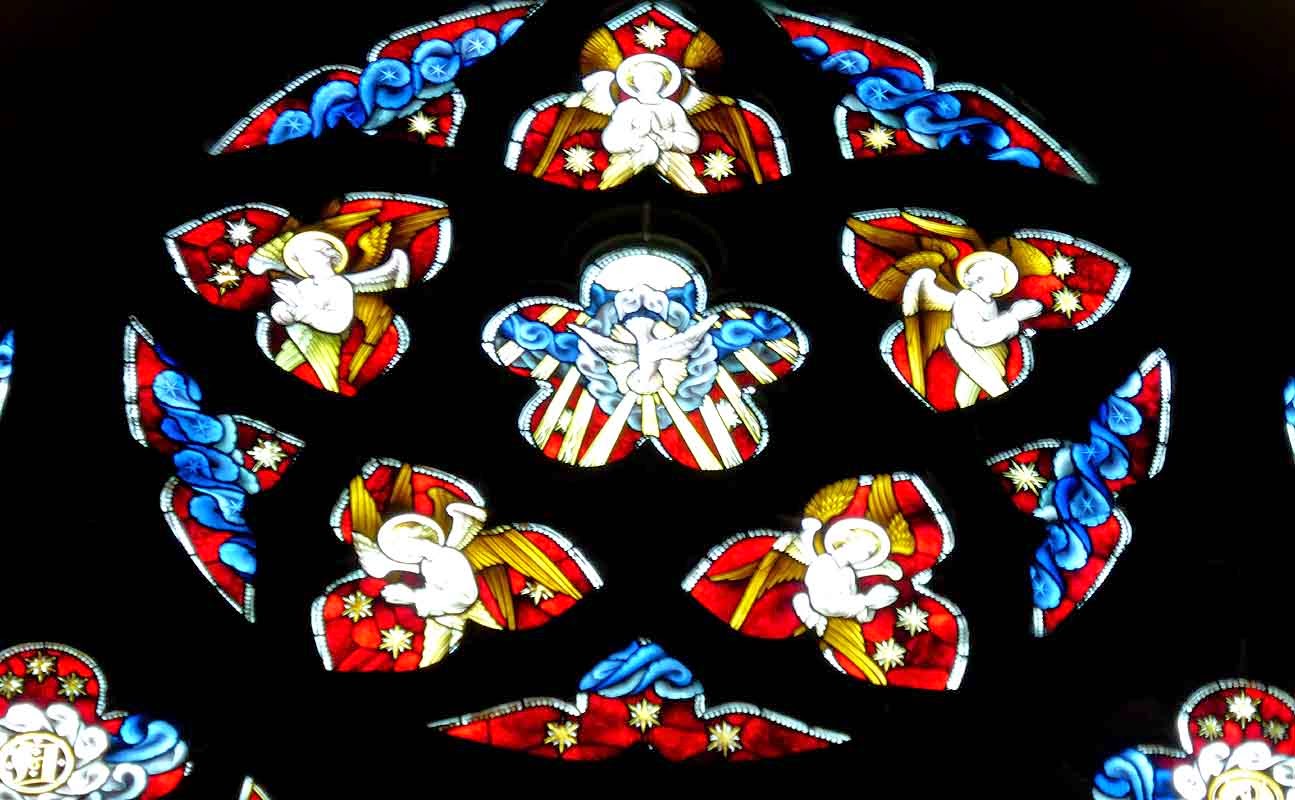 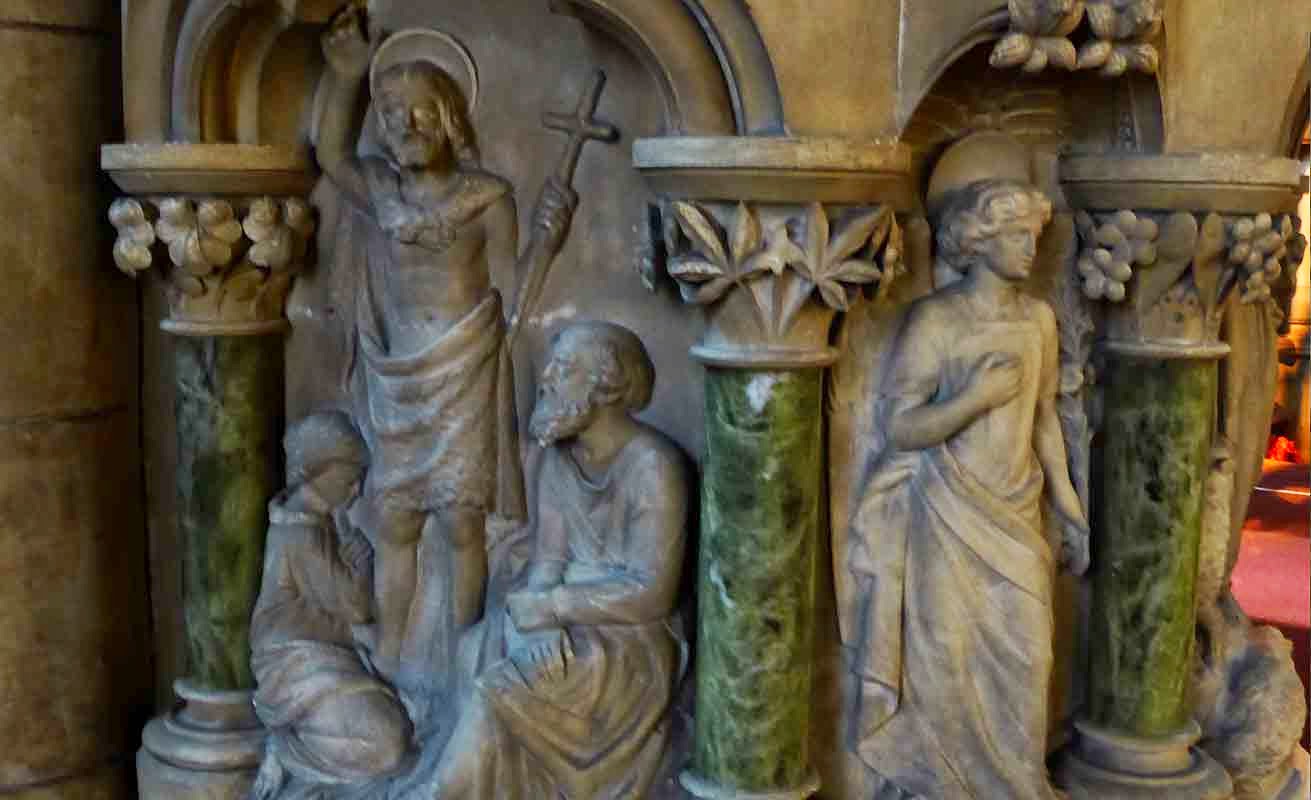 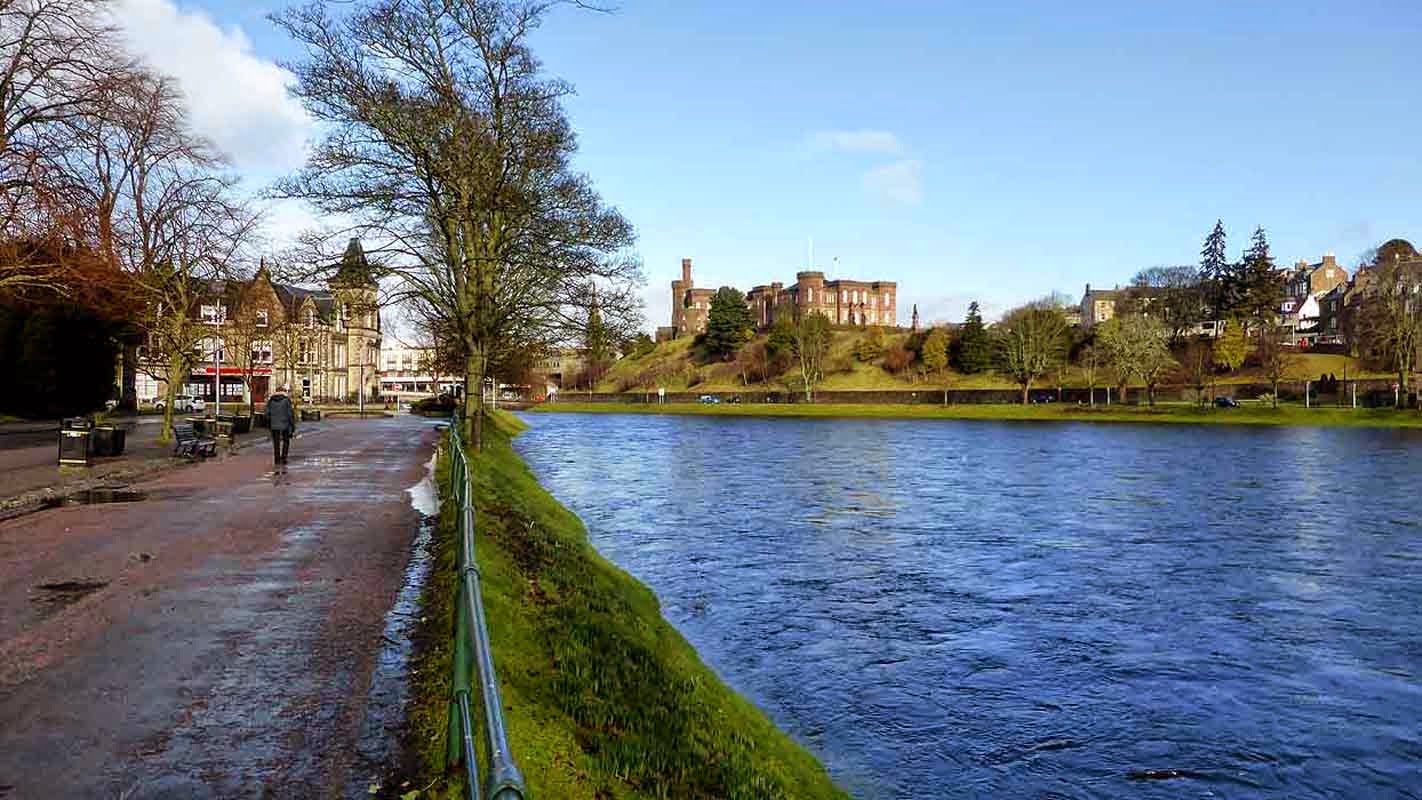 The heavy shower didn't last long and I was soon in blue skies and sunshine again while the northern mountains stayed black and dismal. A fine day for low level walking. 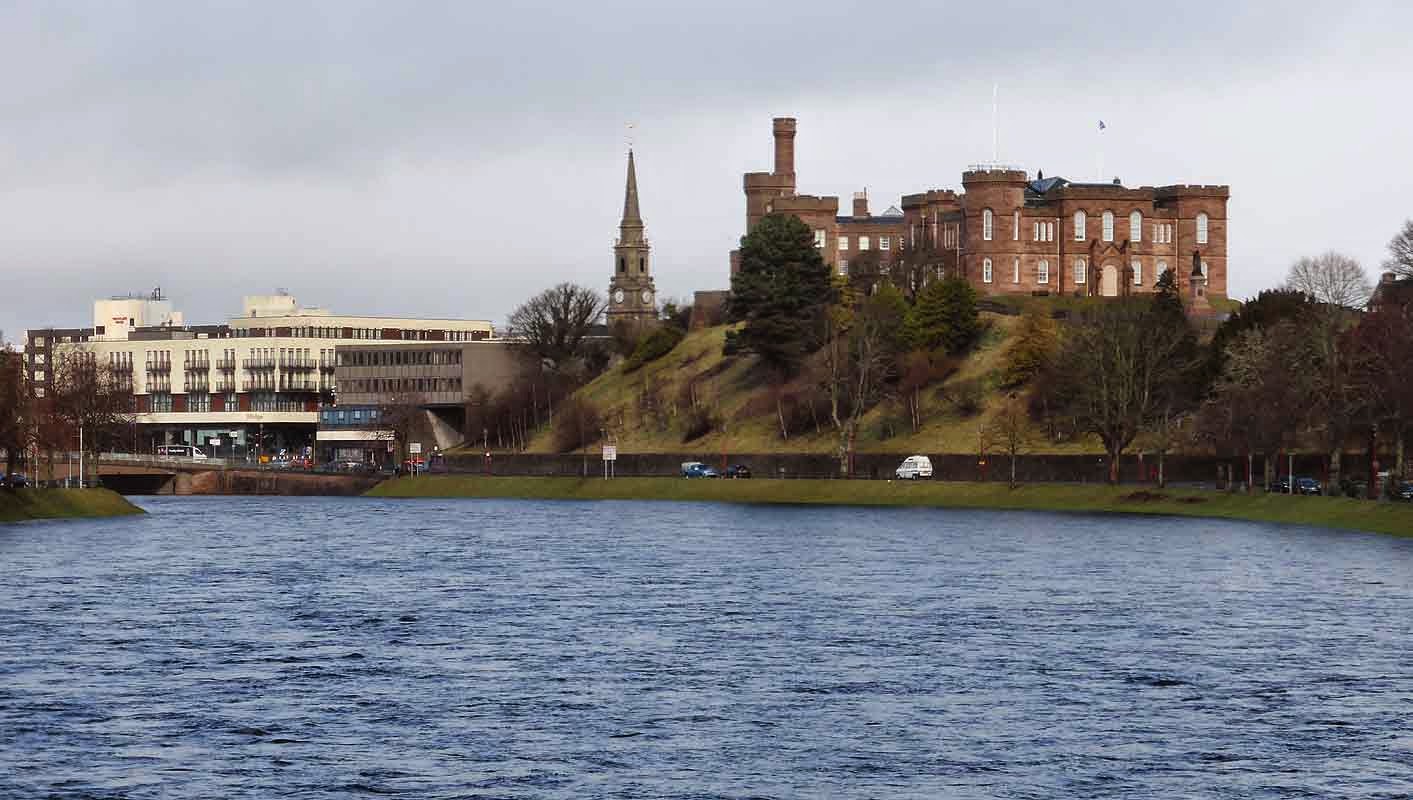 Inverness Castle was my next port of call. This is a working castle as it is the highland capital court and not open to the public unless you are appearing before the bench or you are a visitor, a witness in a trial or on the jury.
http://www.castleuk.net/castle_lists_scotland/26/invernesscastle.htm
I was mainly up here for the views over the city as Inverness does not have many urban hills within the built up districts. 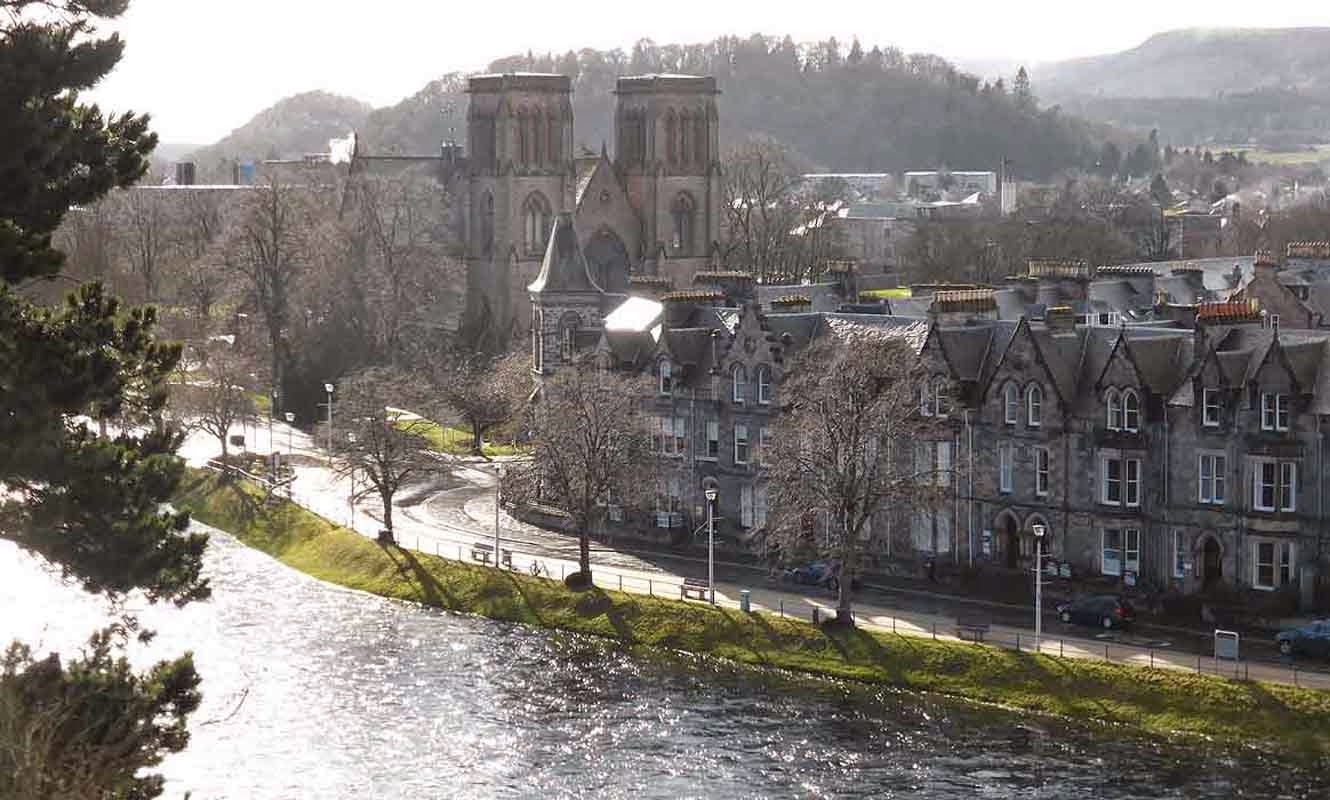 One of the River Ness and the cathedral from the castle walkway. 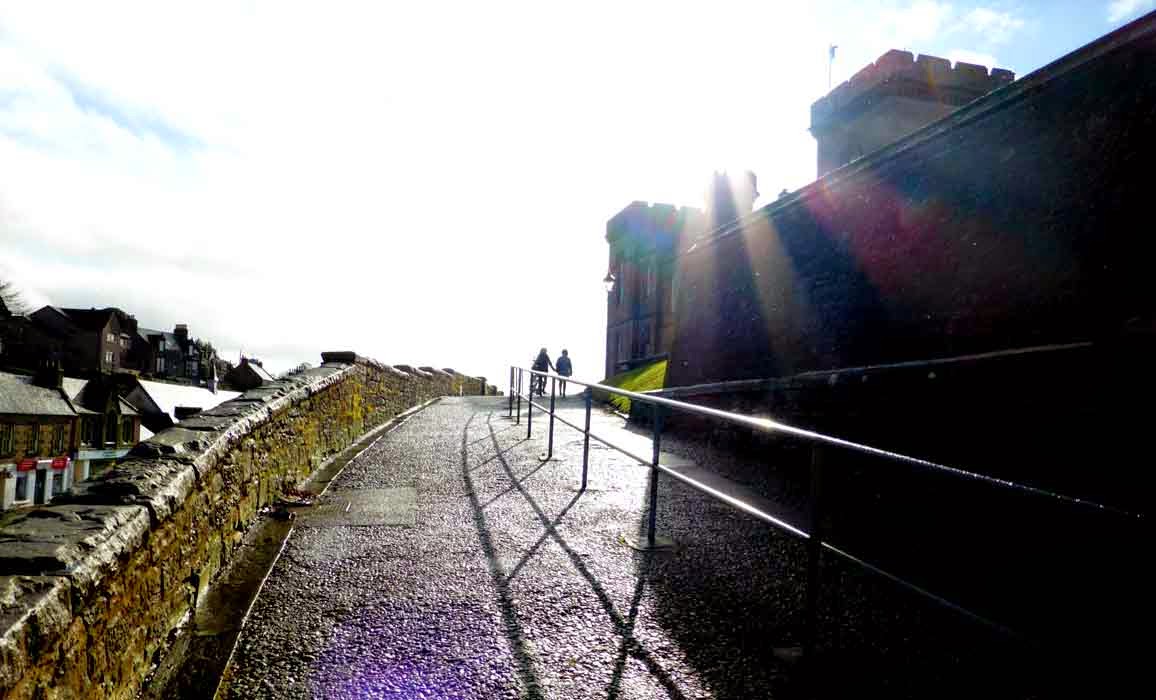 Climbing up to the castle. 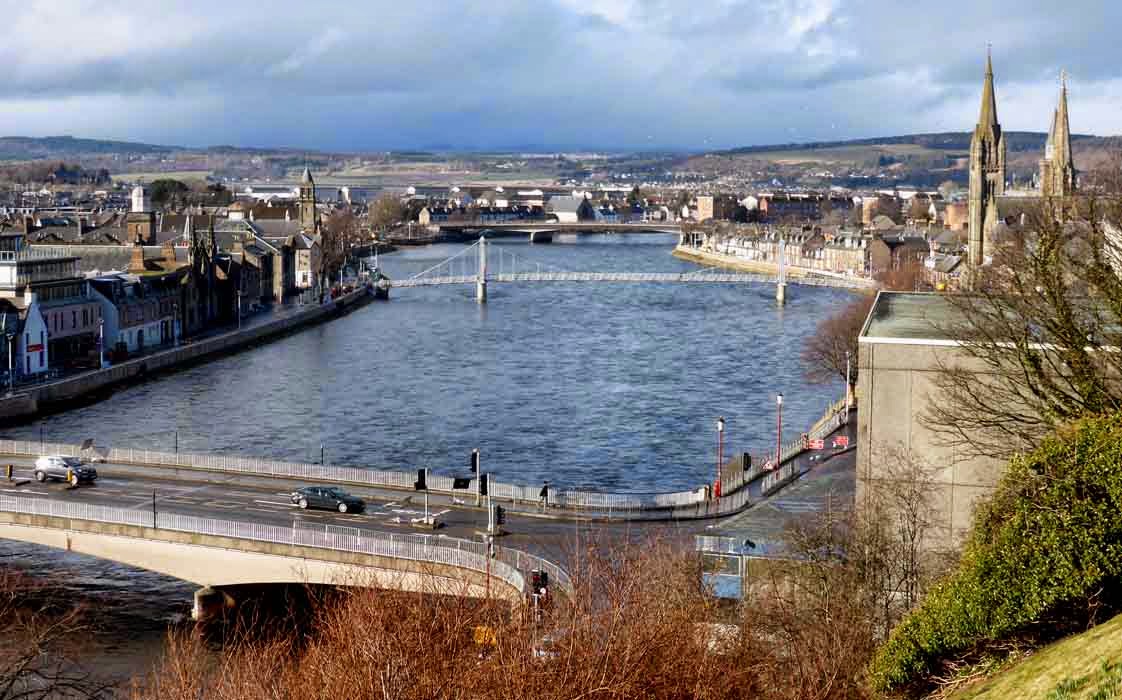 Inverness from the castle. 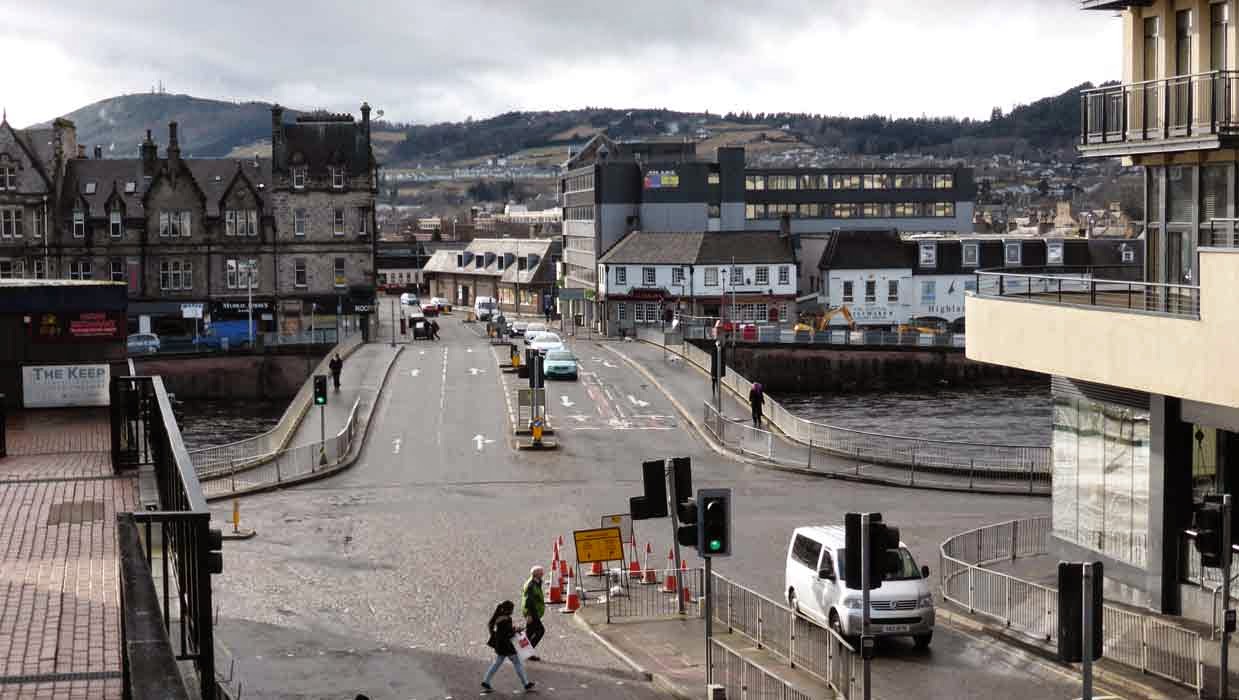 The main street and bridge over the river. 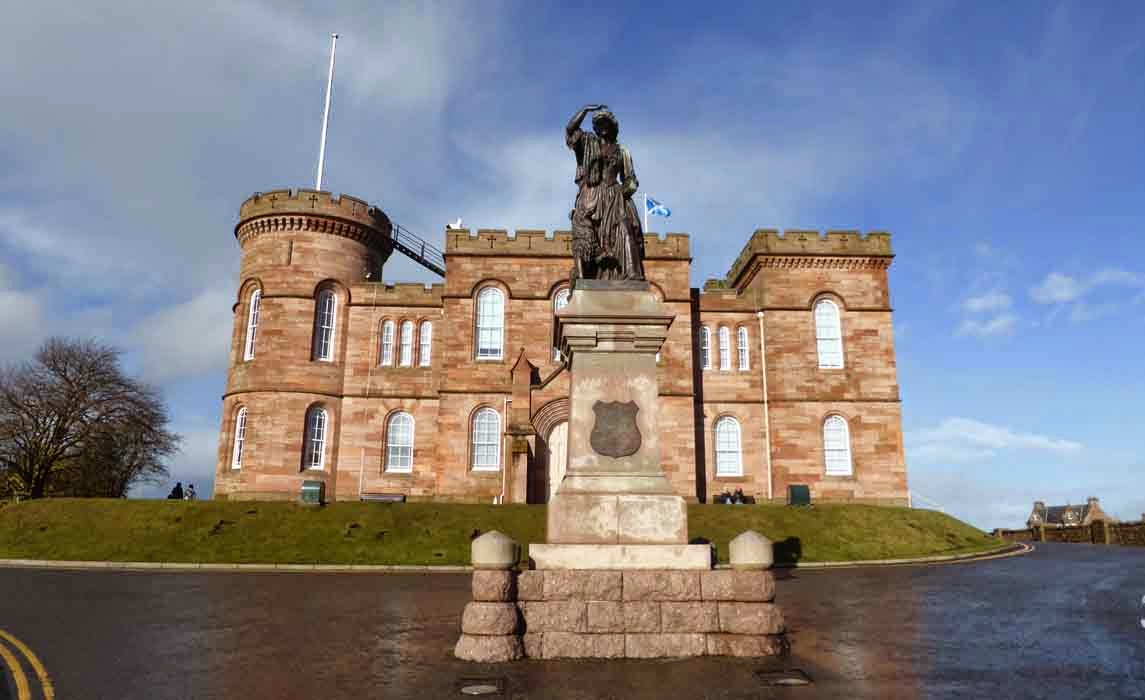 Flora Mac Donald's sculpure outside Inverness castle. Waiting in vain for the return of Bonnie Prince Charlie.
I had a wander round the town shopping district then headed for the Eastgate centre. If I,d remembered Inverness Botanic Gardens were open on a Sunday I'd have visited them as well for the glasshouses and fish filled indoor delights but I completely forgot about this attraction. Plenty of  things to see and do in Inverness though. Unfortunately, the Museum was shut on a Sunday and also the Victorian Arcade. See photo below. 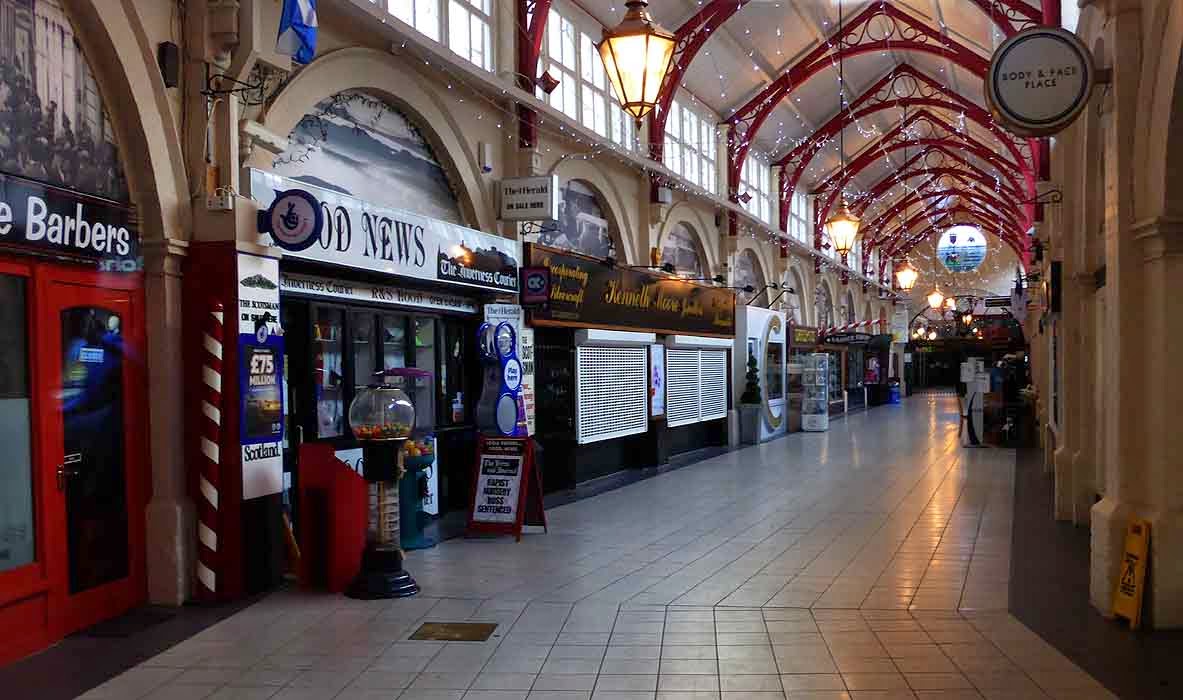 The Caledonian is now a pub. This A listed ornate building used to be the Bank Of Scotland. 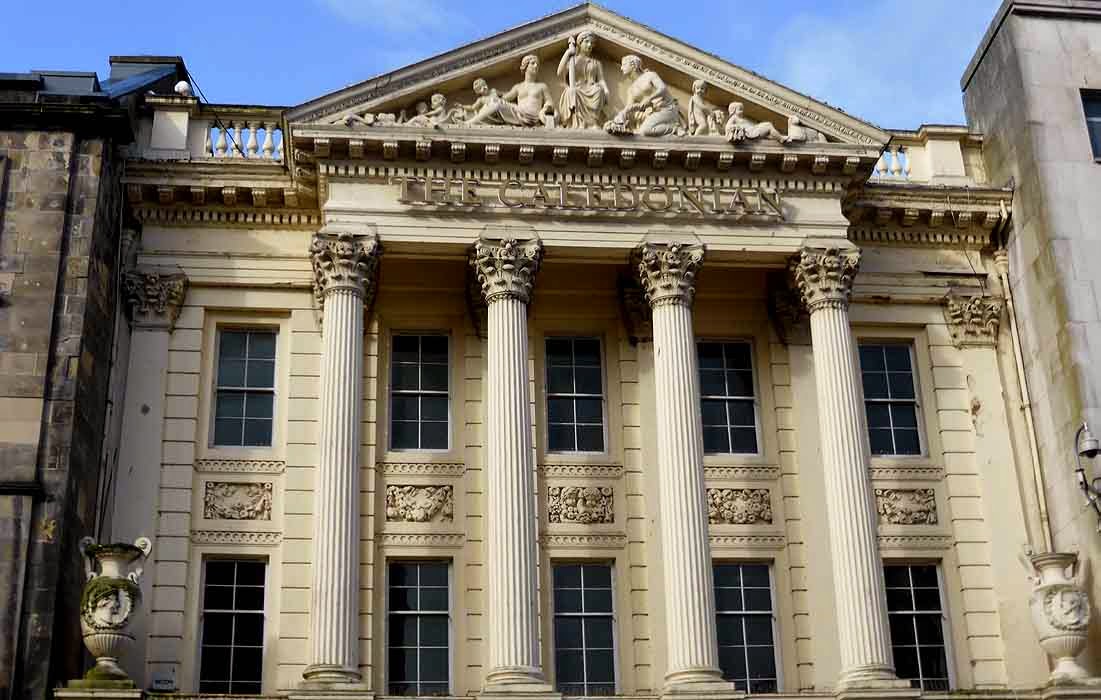 After a tour round the shopping streets I headed for the new covered in Eastgate Centre as another heavy shower was imminent. 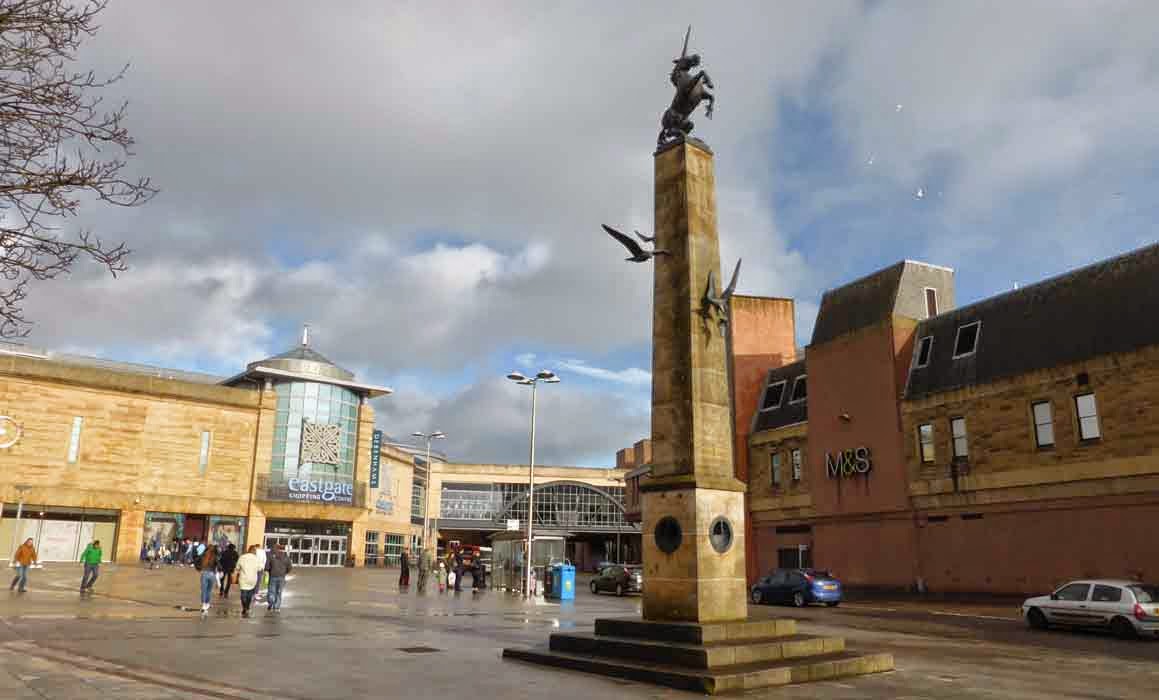 Warm and dry again listening to the rain hammering outside on the roof. 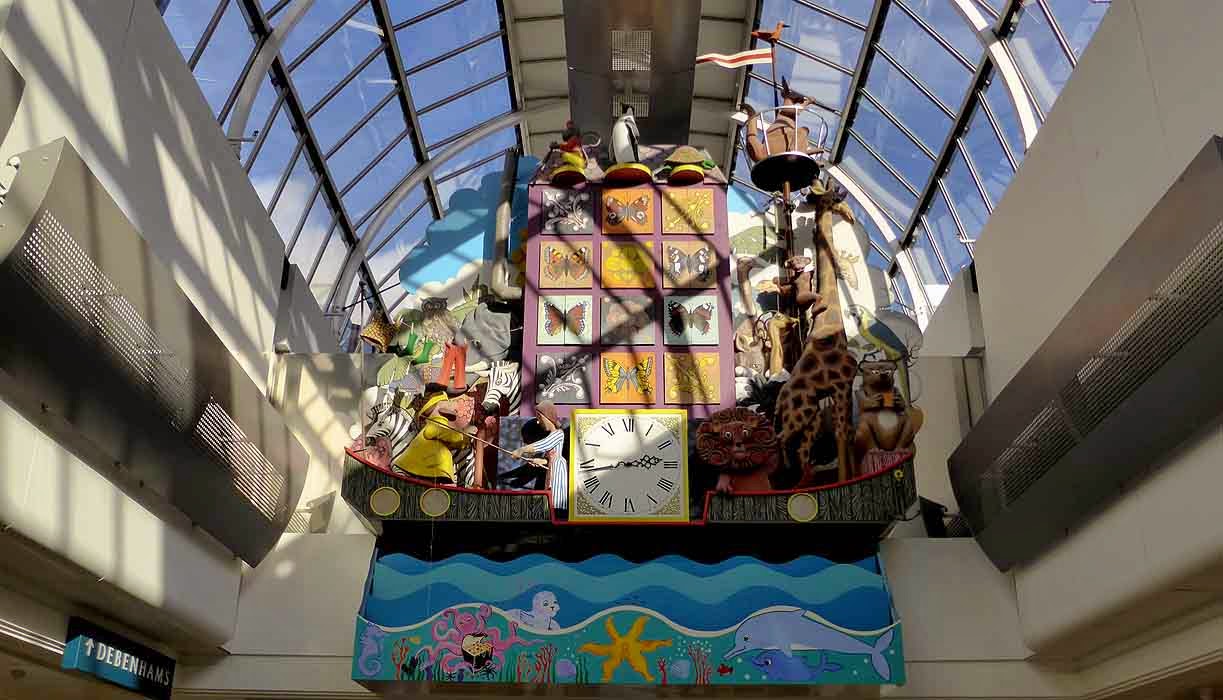 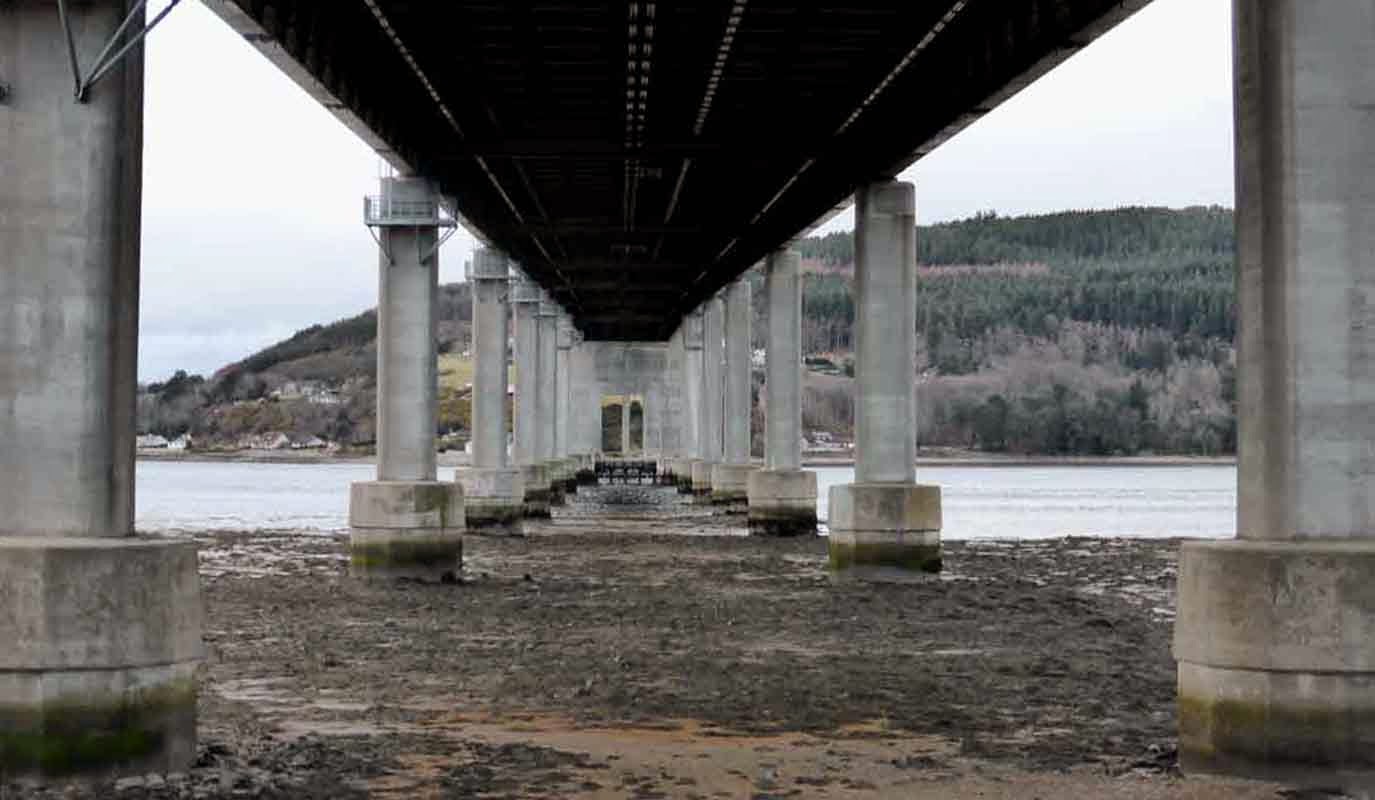 As I'd arranged to meet Alex and John at Tiso's on the outskirts near the Kessock Bridge I had a wander down in that direction to see the old ferry slipway at South Kessock and ended up exploring under the bridge for a while before returning for a sticky bun and a coke in the indoor cafe. Another heavy rain shower avoided. 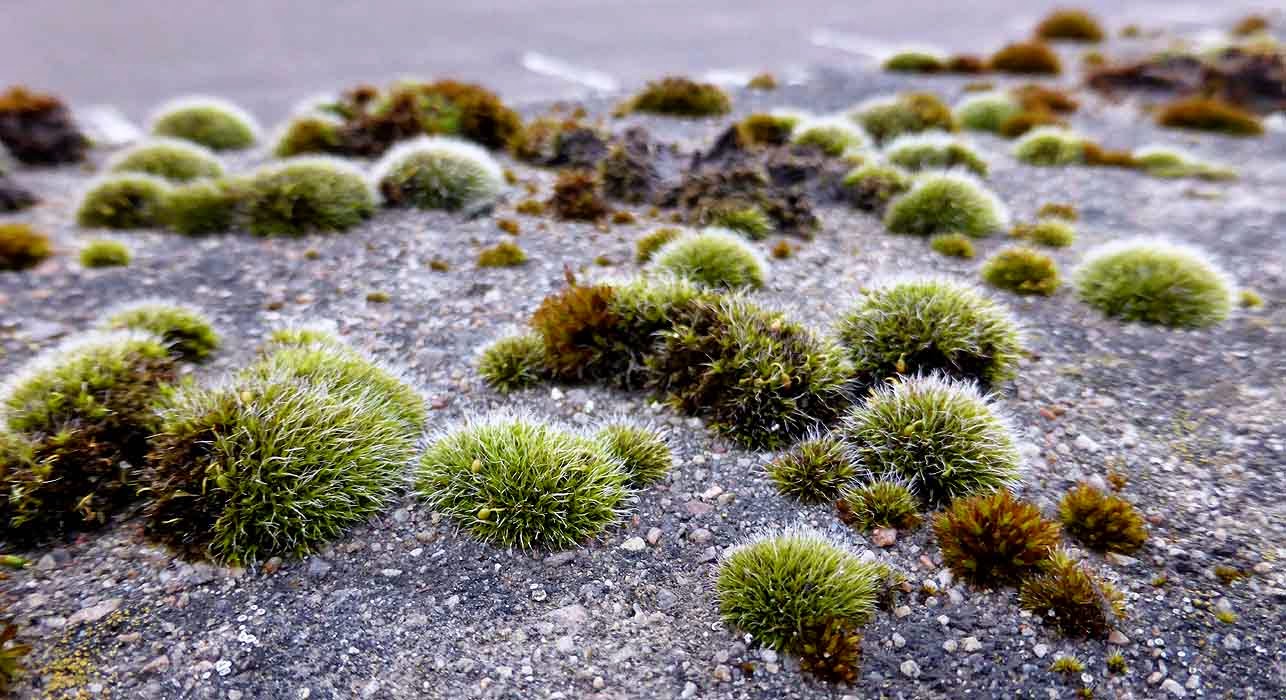 At five o'clock Tiso's shut their doors to the public and I spent a long chilly hour sitting on this wall outside waiting for my lift to arrive. Now I know how prostitutes feel waiting for a client as I watched cosy car after cosy car zoom past my frozen wall, hoping for a pick up. Any pick up.... as the freezing chill started to seep right into tired limbs. What if they failed to turn up? Where would I spend the night? Must be a cold, lonely profession. Me being me however, I soon became fascinated by the amount of moss growing beside me on the bare slab. An entire micro world of small scattered islands on a concrete sea. Must be the lack of light and damp air up here. It was a mini forest in its own right.

When my companions eventually arrived they had tales of gale force icy winds on the heights, frequent rain and savage sleet showers all day, wading knee deep melting snow in the gullies, raging burns in the glens, and murk laden invisible summits.
" One of the worst days I've had on a hill yet." muttered a shattered Alex. " Frozen and soaked beyond belief. Find me a warm hole to crawl into then let me die." He croaked. "Just shovel in the dirt."
"It was hard." a younger John admitted.
"That's the spirit. Only a few more to go now." I gave him a friendly pat on the back.
By now it was getting dark so we had much needed chip suppers for sustenance then braced our bodies for the long walk in to the fabled secret of all secrets... "the" original secret  bothy X...   We were not finished yet. Head torches and large packs would have to be shouldered and miles of tough ground covered before we could sleep tonight in this fabled luxury abode............. " just let me die in the car." Alex moaned. "The idea of a walk in the dark up an unfamiliar glen in winter has gone right off me now I,m here.......... I'd rather die in this motor than have a heart attack on the side of a hill somewhere during a blizzard......
......... To be continued.

Love your cathedral and moss photos :-)

Sounded a terrible day on the hill - how many Corbetts has Alex to go now?

Hi Carol,
He's down to the last dozen or so now. I distracted him by doing loads of lower hills around the central belt.
All the ones he has left are remote and separated but he'll get there.
The Ness islands are beautiful but it depends what excites you. Only a short walk around them.