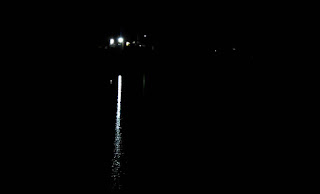 ALL PHOTOS CLICK FULL SCREEN
After visiting Oban we travelled to the end of a minor highland road in the dark to start the walk into the bothy. Years ago we were all keen bothy baggers, collecting them like badges, when it was still a magic art to find them and the outcome was never certain visiting a new building... as to its exact location and if it would even be there intact or just a hovel or worse...not there at all. Now the MBA ones are all on a list and the main uncertainty is if it will be too busy to stay in for a weekend if situated in a popular location. I'm slightly conflicted over bothies these days as I enjoyed them while they were still empty and my preference now is to just visit the remaining secret ones I haven't been to yet as they still give me the biggest thrill. However, as a blogger I cant post these and even the well known MBA ones, in my own personal opinion, lost some of that magic, with the internet outing their locations. For this reason I prefer not to name them on the blog, even the MBA ones. This might seem selfish but once anything gets too popular and "trendy" or "fashionable" it tends to put me right off it. I also feel some responsibility not to add unnecessarily to the current media wave of interest in bothies with several recent programmes marketing them more like remote "shabby chic- slumming it, cool hang out free hotels" rather than what they were originally intended to be. In my own way I'm just trying to get some of that early mystery and magic back again. It's a different age now though and maybe I'm just stuck in the past on this issue 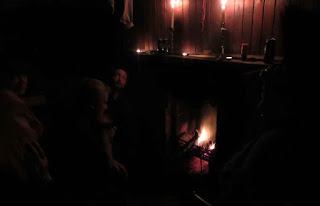 After a few miles walk along a track with only our head torches to stab the vast ocean of darkness in front of us we arrived at a bothy all of us had visited in the past. Gavin, Scott and Julian soon joined us. The other room had a convivial group of Aberdeen University students in it so if anyone else had turned up we would have squeezed them in somehow but they may have had to sleep standing up. We had deliberately picked a multi room bothy in case it was busy and the A. U. students were friendly, sociable and went to bed before we did. Us old geezers were the party crowd! 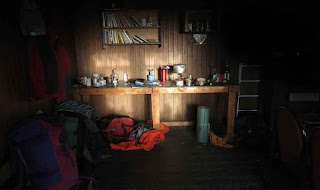 Luckily, it was a dry windless night for the walk in and morning sunlight at breakfast proved we had been right to trust the weather forecast. A glorious sunny weekend in a month noted for its seemingly endless rainfall, grey skies and gales. 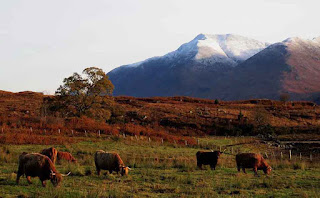 A beautiful scene. Highland Cattle under Ben Starav, 1078 metres high with a dusting of fresh snow. 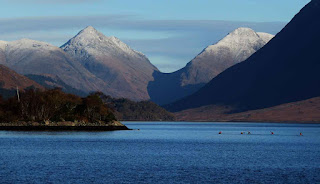 Kayakers on Loch Etive heading towards Glen Etive and Glencoe. 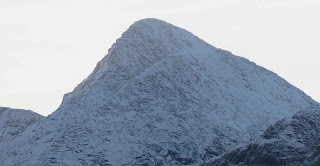 Ben Cruachan, 1126 metres, one of the giants of the region from a sea level start and the Clan Campbell's war cry in day's of old. It might not refer to the mountain though as low lying fertile areas were more important then and held the wealth and power of any clan in livestock and harvest produced. 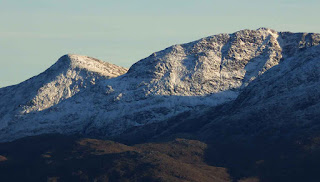 Ben Cruachan from a different angle. A large complex mountain of several different peaks and ridges. Climbing them for fun is a fairly recent concept and William Wallace, Old Highlanders and valley dwellers usually avoided them unless they were forced into it with no other option available. 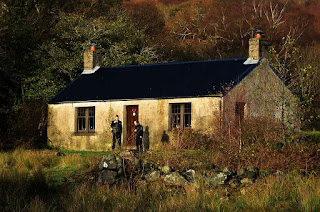 The bothy in morning sunlight. 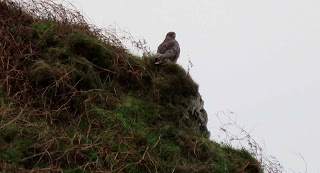 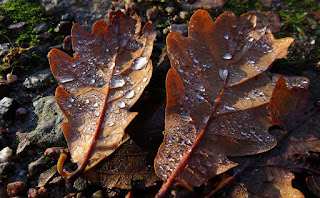 On the walk in the track had been covered in sparkling gemstones whenever it passed under a woodland canopy. It was our head torches hitting fallen autumn leaves with half frozen rain or dew drops covering them like gemstones. Really pretty in the pitch black night and it gave us a lift, flagging under the weight of full rucksacks, plus coal and logs. 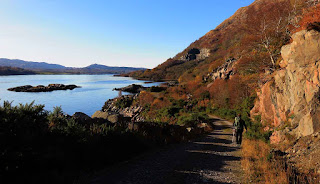 The walk out and a perfect day. Scotland, in conditions like these, can be one of the loveliest landscapes in the world or one of the most desolate and bleak places on earth... often a day apart.We rarely get a long run of good days strung together and a cloudless blue utopia like this one can often be followed by a massive rain storm raging in off the Atlantic 12 hours later that can last for a week or more. Planning good days ahead with the latest scientific weather knowledge... or simply being near a friendly witch or warlock then casting spells together...certainly helps. 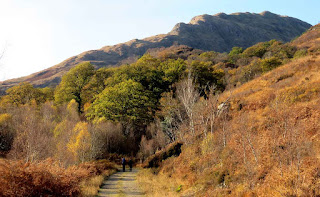 Walking out back to the cars. 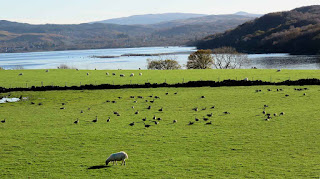 Fields of winter geese and grazing sheep. The geese have arrived from the far north... Greenland, Scandinavia or Russia, depending on species to spend the winter months in our milder climate as they can't survive under metres of low lying snow. 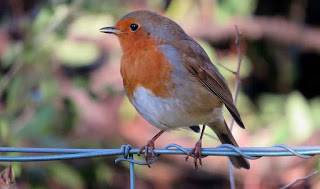 A winter Robin. Another much loved migrant that made it onto Christmas cards as a popular symbol of the UK. If it could speak in human language five times out of ten it would be with a foreign accent, just like half the birds in Britain every winter. Lucky for them they are silent and we spend millions feeding them in our gardens.
Just a thought :o)

Some more views of Scotland in fine weather. Like most things in life, remote controlled drones have a variety of different connotations, meanings and uses, depending on where you live. If you are one of the lucky countries they capture peaceful images like this and have a camera as the payload. A truly stunning short film that deserves a wide audience and a lot of work and effort to create these shots. He has others on You Tube.  Best watched full screen. (On the downside, if unmanned drones get too popular or are used irresponsibly by non professionals it's just one more more thing to worry about for our already stressed out wildlife. Truly no hiding places left now.

Having seen tonight's news, thoughts go out to all those affected by severe flooding in Scotland, Carlisle and The Lake District. An almost yearly occurrence in Britain these days over a wide area every winter.

There used to be a crazy and extremely rude artist who spent the summers in that bothy and tried to chase everyone away. Sadly he died one year when he went into the loch and got caught in the wreckage of a submerged car that had been abandoned by locals :(

I agree about the internet killing the bothy 'knowledge'. It is no longer hard-won, but then the internet has done that for so many areas.

Hi R.C,
one of my favourites for the straightforward walk in after dark and the beautiful scenery in daylight coming out. It was still in good nick and well maintained.

Your mountains look so beautiful with a dusting of snow!

The scenes are too beautiful for words.

Hi Linda,
Yeah, they are not bad for pimples. Nothing compared to the Rockies though.

Hi Lux G,
Thank you. I do my best. Glad you like them.

OMG! How awful about that poor guy getting tangled up in that car wreckage and drowning! :-( I'd have quite liked to have met him really - must have been a real character (Robert Craig's comment).

I fully agree with you about the over-publicisation of bothies and their locations - I'm not at all sure they should be featured on the telly and I think they do give the impression you mention on those kind of programmes. Haven't been to that one but it looks nice. Is it cyclable?

I always forget something... I have robins all year in my garden so I don't think they're foreign. I see them more often in winter though.

Hi Carol,
British Robins appear in gardens more often and come closer to humans. European robins
fly over for the winter from countries further north or with heavy snowfalls to survive but tend to prefer woodlands and non urban places as our robins defend their own territories vigorously against any intruders. European Robins tend to be less colourful and not as tame around people.