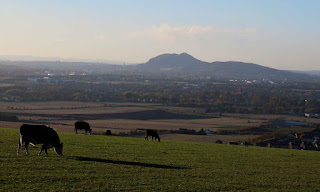 ALL PHOTOS CLICK FULL SCREEN.
On a lovely sunny morning in October 2015, a golden autumn which seems like a dream now after three months of almost continuous storms, flooding and rain, a group of us set off early to explore the east coast around Edinburgh and Lothian. This is a distant view of Arthur's Seat, the ancient volcano in the heart of Edinburgh seen from Falside Hill above Wallyford. 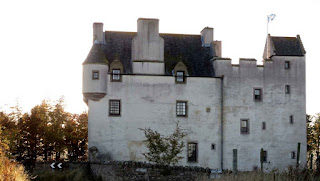 We were here to see this fortified house marked on the OS map as a castle. A private abode so no entry. The fertile lands around Edinburgh and Lothian are very rich in history, mainly because the land is excellent for farming and the Scottish east coast in general has been settled and used to create great wealth over centuries. The West Coast may have the spectacular mountains, jagged terrain and twisting sea lochs but the east has always been the dry and warm bread basket of the country and many grand houses and ancient estates dot the landscape. I enjoy both areas and never turn down any opportunity to head east. Usually the sun is here as well which is another big bonus.

A view of Edinburgh from the east looking over at Musselburgh, Joppa, and Portobello Beach. 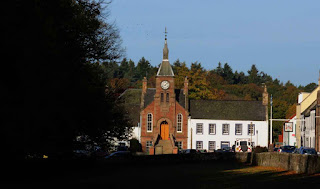 Our first destination of the morning was Gifford and as we had left Glasgow very early we arrived just in time for the shops to open and get a quick breakfast on the move. Gifford is a pretty little village but the reason we were here was to visit Yester Castle and the infamous but little known Goblin Ha', a sizable cavern under the foundations. It was reputed that the castle was occupied by a wizard and necromancer as detailed in this link.
https://en.wikipedia.org/wiki/Yester_Castle 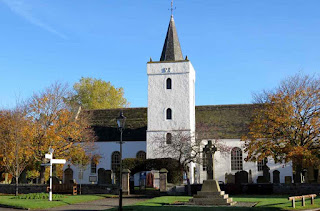 A nice church at Gifford. 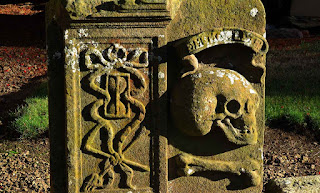 The ruins of the castle are not far away, hidden deep in a wooded gorge and beneath them sits the Goblin Ha', reputed to have been clawed and chewed out by an army of hobgoblins, raised by the castle's owner to do his bidding. What's not to like? 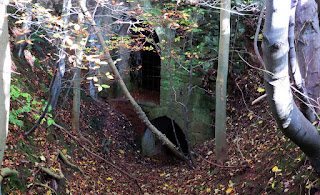 The entrance to the cavern, now closed off with iron bars.... in case the creatures escape presumably? Fortunately Graeme knew another way in... 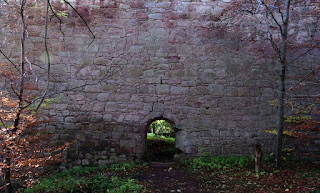 A head chopping entrance into the castle. A common feature in this type of fortification to force intruders to crawl through, thus setting them up for the defenders using sharp sword or axe. 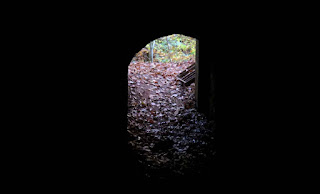 The entrance leading under the castle.Another low stoop into darkness. 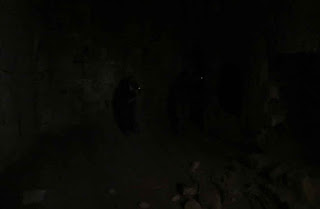 Inside the main chamber. Some natural light from two iron barred windows which was just as well as all we had was the glow from two phones to get around. Graeme informed me there was also a flight of narrow stairs leading from this hall down into an underground bolt hole and well. At one time it may have been an escape route leading out into the gorge but was now blocked off and a dead end. No well either as that was long gone, without any maintenance. I'd stupidly left my torch behind at the car by accident and the stairway down was pitch black, uneven underfoot and rather creepy.
" I can't see a scooby. Hold on a minute. Don't be hasty here. " I squeaked as Graeme insisted on pushing me towards the entrance to the tunnel to let me enjoy the darkness fully.
"Get down there ya big Jessie." He encouraged, forcing me on.
Eventually I made it to the bottom with the aid of his mobile phone giving off a spooky half light. We held hands together in the Stygian gloom as we crept further along... then I discovered it wasn't his hand.... 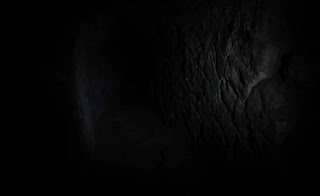 A creepy place indeed and we didn't linger long. 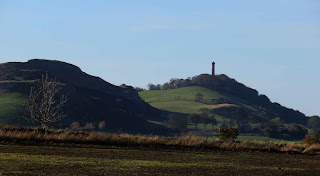 Back up top in the sunshine once again we made our way across in the car to the nearby Garleton Hills to climb the Hopetoun Monument. I'd never visited Yester Castle before but Graeme and Bob R had not been up the monument, which is left open sometimes. We were in luck and the spiral staircase was soon ascended for terrific views over Lothian. Alex was also with us. 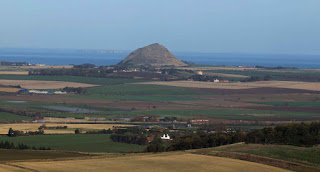 The volcanic plug of North Berwick Law, with its whale bone arch on the summit. 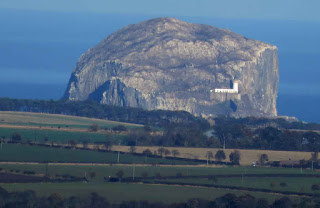 A zoom of the Bass Rock, nesting season over for the gannets,but each spring it becomes the largest northern gannet colony in the world and a favourite of mine with an early rowing boat trip around its sheer sides described in my first book. Link here for that. £1:14pence for 500 pages with interesting trips all over Scotland and Europe.
http://www.amazon.co.uk/Autohighography-Summits-Sinners-Bob-Law-ebook/dp/B00JNAIGAO/ref=sr_1_1?s=digital-text&ie=UTF8&qid=1454327053&sr=1-1&keywords=autohighography.+bob+law. 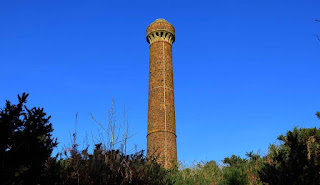 A view of the monument. What a cracking day out east. You can climb right to the top and a torch is handy here as well though not essential equipment. 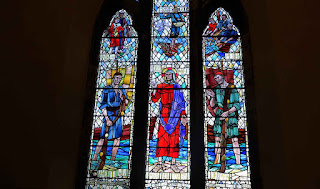 We then visited the tiny village of Athelstaneford where the Flag of Scotland was first seen during a reputed battle between rival armies. A common sight with aircraft jet trails crossing overhead now but this was in 832AD. Known as St Andrew's Cross as this saint was crucified on an X shaped cross not the usual Latin ones we are familiar with today. 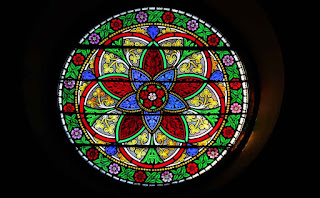 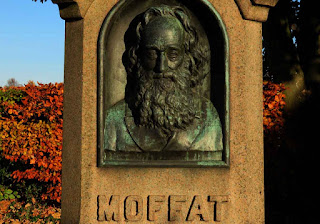 The village of Ormiston came next on our enjoyable and varied day trip out east. It's surprising how you always find nuggets of history everywhere, even in isolated corners.Sleepy little villages like this one may surprise you with a gem or two. This is a tribute to Robert Moffat who was born here. Father in law to David Livingstone and a pioneering missionary in Africa in his own right he was instrumental in helping Livingstone thrive in Africa and must have considered the younger man a suitable match for his daughter's hand. 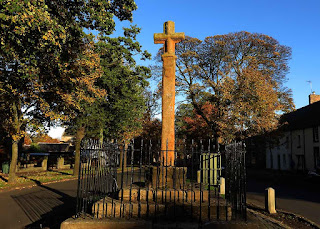 In the same village is this old cross on the main street. A 15th century survivor, historian's have found the remains of" Jougs" and  "Branks" as it was a place of punishment. The first is an iron collar for chaining wrong doers onto so that all the community could witness their shame and the second was the infamous "witches or gossip's bridal." A lower iron cage meant to fully encase a female's head, with a metal plate (sometimes containing a spike) inserted into the mouth so that they could neither speak or throw curses at onlookers. Happily woman's lib has improved since then... which is very good news for Nicola Sturgeon,Ruth Davidson et al... in nearby Edinburgh.
And on that happy note we will end our tour of Lothian and return to civilized Glasgow.

An excellent video of a descent into Goblin Ha' made with a great deal of imagination and style. Worth a watch in full screen mode with the lights out. Spooky stuff and well conceived. Although a night time tour of the cavern it's actually much brighter and better illuminated than our daytime visit with two feeble glow worms as a guide. Nice to see the stonework details and the roof of the cavern properly.

I'd love to come and tour all the castles you have in your country. Such interesting history! The other night I watched a tv special (I think it was Rick Steeves) about touring Edinburgh - made me want to come visit. :)

Hi Linda,
Edinburgh and the east coast is probably a good base as Edinburgh is a very photographic city, being built over ancient volcanic plugs with plenty of wet weather alternatives just in case. It gets more sunshine and half the rainfall and you can just as easily visit the Scottish Highlands and Glasgow from there. April, May and June are usually the driest months here although nothing is guaranteed nowadays with our increasingly unpredictable weather in recent years.
If you ever do come over and I'm still above ground I can give you some suggestions regarding the best scenery and most interesting tourist destinations you may like, which may not always be the obvious hot spots in official guidebooks.

That's a pretty interesting tour - surprising amount to see in the Central Belt isn't there?

What a great post Bob - just full of variety; thanks for posting. There's some places you've featured that (to my shame) I've never even heard of - we're ruly blessed to live in a world within a small country.....

Hi Carol,
Yes, it's very rich in history and the lesser hills have a great deal of personality once you get to know them as individuals. Combine that with lower petrol costs for days out and wall to wall sunshine usually and it's a winning formula that is very addictive. I've always felt happiest in sunshine from an early age and would rather go up a pimple under blue skies that a major peak in dull weather these days. It's a habit that's hard to resist and my particular obsession.

Evening Ian,
For someone like yourself, interested in history and archaeology, Lothian and Fife make great weekend locations as you can easily combine sightseeing with a beautifully shaped Marilyn or two then a sandy beach walk, all in one day.
Another history and pimple post, this time over in rural Fife coming soon.