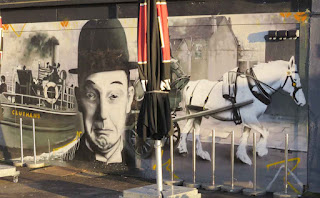 ALL PHOTOS CLICK FULL SCREEN.
Had a couple of short trips to see friends in Glasgow and Greenock recently  and as I am rarely without my camera these days here's a gallery of  snaps. Stan Laurel and one of the Cluthas, (small passenger ferries that used to run across the River Clyde from bank to bank taking workers across to the numerous factories and ship yards that lined the Clyde in those busy days.) They were phased out when the Glasgow Underground was built running under the fast growing city, making them increasingly redundant, though a number of them held on until the Clyde Tunnel was built and cars took over instead of foot passengers. Heavy horses and ordinary nags were a common sight on Glasgow's streets as well until around the 1940s/50s and my grandfather was a carter in the city which might explain my father's love of horses as he probably grew up around them as a boy himself. Stan Laurel's father managed the nearby Metropole Theatre and Stan himself appeared at the Britannia as a young entertainer, still the World's oldest surviving Music Hall. Yet even today many Glaswegian's are unaware it exists in Argyle Street. I only found out about it myself when the Doors Open Days started.
http://www.britanniapanopticon.org/ 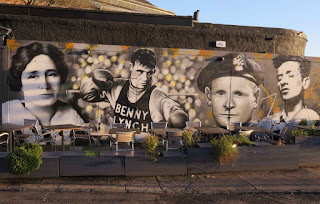 The other front panel mural decorating the reopened Clutha Bar. From left to right. Mary Barbour, champion of the rent strikes in Govan after the Second World War when money was tight and folk were squeezed too hard and rebelled. Benny Lynch, World Champion Boxer during the 1930s. Johnny Ramensky, master safe breaker and escape artist who walked out of many a Scottish jail and was known as "Gentle Johnny" as when caught he always went quietly, only to skip out of prison some time later and go on the run again with a smile. He was so good he was recruited for his talents then placed behind enemy lines to break open the safes of the German High Command. Woody Guthrie- who reputedly played in this popular folk pub during the war. A triangle of three well known pubs dot this corner of Stockwell Street and Bridgegate. The Victoria Bar, The Clutha and the Scotia Bar. All are known for informal live music being played over decades.
http://scotiabar.net/music.html 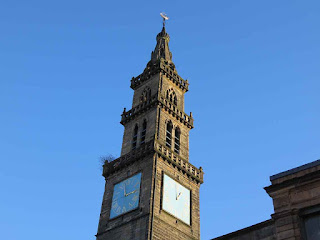 The nearby spire above the old Fish Market. This is one of the oldest corners of Glasgow with many fine period buildings still remaining. The steeple was erected around the 1660s. 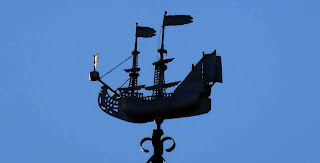 The ship on top of this spire. 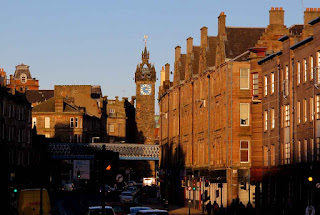 The Salt Market. Now just a city centre street catching the winter sun but once the pavements in this vicinity would have been covered in used salt to preserve the stacked boxes of fresh fish presumably. It was also known for the wool and cloth trade. The Tolbooth steeple is slightly older at 1620s and was part of a larger building that included a prison and early city council offices. A great link to the
Glasgow of old as the Saltmarket used to be a notorious warren of close entries and drinking dens in the 1800s.     http://www.oldglasgowpubs.co.uk/saltmarket.html        Well worth a read. Colourful description and period photos of this maze of lanes and alleyways running off a comparatively short street. 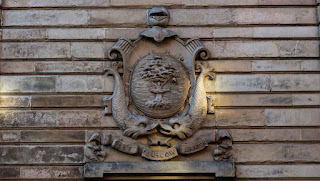 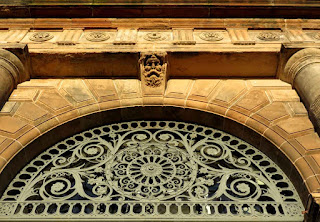 An old entrance gate to the market. Metalwork detail. 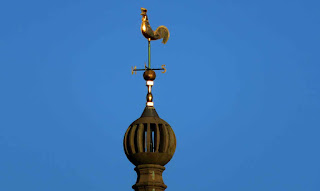 A spire on a nearby steeple catching the setting sun. 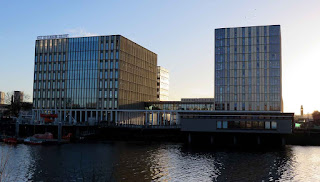 The new City of Glasgow College in the nearby Gorbals district.A nautical college has always been here of course, this is just the latest look to bring it up to date. Instead of individual buildings and college/universities as separate independent working units they have recently been grouped together into bigger collectives. A recent money saving trend in many organizations, including Scotland's police force... with mixed results. 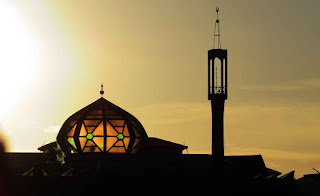 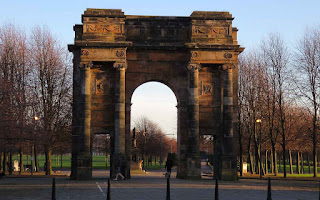 Mclennan Arch. A massive structure and one of the entrance points into Glasgow Green. Scotland's oldest park and grazing common for livestock, dating back to medieval times. Unruly folk used to be hanged here along with washing lines and salmon fishing nets. Large events and fairground rides drew the crowds in along with families keen to have a picnic after viewing a public execution. The reality TV of its day.
Amazingly this arch used to stand one floor up in a much larger building erected in the late 1700s called the Glasgow Assembly Rooms. It was not even an entrance gateway into that building which was demolished in the late 1800s and was never designed to be walked through in its original setting. That shows you the scale and grandeur of old Glasgow in the past. This arch was just a window frame. 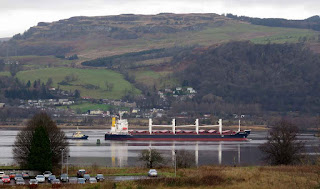 Some ships still travel the River Clyde however. This is the Princesse Oui, a bulk carrier and a large ship at 180 metres length. According to Ship Finder it has also been to Belfast and Bangor recently, presumably to pick up bulk broken rubble from demolished tower blocks or scrap metal. Glasgow's main exports these days along with university students. Not for the first time I found myself thinking that the money in the UK  used to be distributed more evenly in terms of exports with the big industrial cities like Liverpool, Manchester, Birmingham, and the rest able to compete with London better and punch with equal power. Now only one British mega city seems to dominate international business, trade and commerce while the rest play around with the scraps that are left. In a recession however it is the entire country that is always expected to take one for the team, whether they have experienced any good times or not. A situation not unlike the myth of the "Swinging Sixties" when the UK only swung for a select handful in a few areas while the rest got on with the usual daily grind as ever. But maybe I'm wrong? 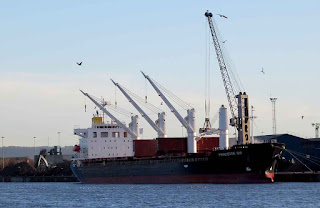 This is the same ship at Glasgow's King George V dock and it seems to be metal of some sort going in or out of the hold. It was taken with a zoom from South Street and it was only when I downloaded it I spotted this occurring. A new ship only built in 2015 sailing under a Panama flag. It took three tugs to escort it safety up the river to here. Two ahead leading the way and one behind. 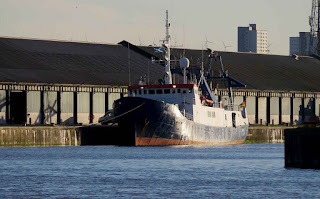 A colourful and beautiful if somewhat scary video of some of the world's best climbers visiting China and the Li Valley to climb the massive towers and vertical walls of Karst limestone there. This is mind blowing stuff in full screen HD. Not for the faint hearted but well worth watching.

Thanks for the great tour of Glasgow and all the history!

Cheers Linda,
Learned a few things myself wandering round the old Fish Market and looking at the carvings on buildings. Never knew there were so many pubs in the old Saltmarket or how many tight narrow lanes ran off it in the 1800s.

I can't imagine wanting to go and watch an execution - I'd be sick for sure and it would haunt me forever!

Hi Carol.
Yes, but people then were used to a harder,more violent life. The 14th Century would seem equally barbaric to someone living in the 1800s. Even where I grew up in the 1970s and 1980s gang fights with knifes and swords were a common occurrence and just accepted. Don't think there is as much of that now in Glasgow and the housing estates certainly seem quieter as youngsters play video games inside more and there is more exciting things to get involved in although it still goes on. I'm sure a lot of people coming back from the First and Second World War were badly traumatized as well and some of them took it out on there own children behind closed doors. A reliable side effect of any wars through the centuries.

No, I think you are quite right. Post-industrialisation killed off everywhere outside the southeast, and the subsequent refactoring of the economy has resulted in the UK, through deliberate policy, focusing all its energies on the one remaining economic jewel, international finance based in London. Edinburgh also does alright through finance and Aberdeen (ups and downs) with oil but the rest of the UK between here and the Midlands has had to get scraps.

Hi Craig,
There is so much spin and lies nowadays from both the media and the government about how everything is on the up all the time as they implement each new round of cuts(trimming off the fat) to public services that it's hard to tell sometimes. I suppose if you own half a county and everyone you hang out with is rich and doing well,many using legal loopholes to avoid tax,it probably does seems that way.

Some great observational detail and fascinating information here again Bob. Scrap metal does seem to be a growth export from the UK - I was working on a ship berthed in Liverpool and watched huge mountains of the stuff being loaded to bulkers for shipment. The irony is that it will probably go to China to be converted back into steel and then re-imported to undermine the indigenous steel industry, or what little remains of it.

Public executions as the reality TV of their time is a great concept - perhaps it should be written into the contracts of all those signing up for the crop of soul-crushing "talent" shows - it would certainly add a dimension?!

Cheers Ian,
Yes, most of the boats that come up the River Clyde these days are after scrap metal. If we didn't buy loads of new junk people don't really need (see "Man" video a couple of posts ago)we wouldn't have anything to export.
I try not to watch any reality TV shows as they crush my soul as well. There are great new single artists and bands out there but they have a tough time getting noticed as bright needles in a large haystack of bland mediocrity, but that's what sells in the 2000s.