The Cobbler and The Arrochar Alps. 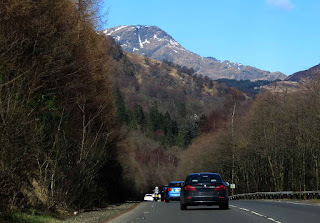 ALL PHOTOS CLICK FULL SCREEN.
It was a fine day last Sunday so myself, Alan, and his faithful hound motored up Loch Lomondside, seen above, to do one of the Arrochar Alps. The original intention was to climb Ben Vane, 915 metres, or Ben Vorlich, 943 metres, two steep hills in this area but as soon as we spotted Ben Arthur, 884 metres or 2946 feet, commonly known as the Cobbler, we decided to go up that peak instead. Although not a Munro (over 3000 feet) it is the most spectacular mountain of the district with its profile horseshoe of rugged cliffs and it was looking at its finest when we arrived. 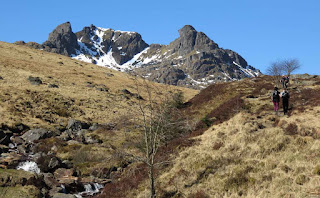 Another reason for picking this hill was that we had a young dog with us and we were not sure how it would react with pregnant ewes and young lambs running around and this hill being very popular did not have any sheep on it that we could see. 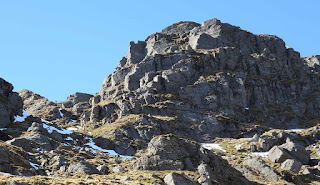 It didn't take us long on a decent path to reach the upper levels of this mountain and start to enjoy the rock architecture that the mountain is justly famous for, with soaring buttresses overhead. Many good rock climbs at all levels start up these cliffs including the classic low grade trio of Ardgarten Arete. Severe, Recess Route. V. Diff, and Punster's Crack, Severe. Alex and myself have climbed all three independently, with different climbing partners over the years. One of the great joys of living in Glasgow is that it's so easy to reach scenic areas on your doorstep and this is only an hours drive away. 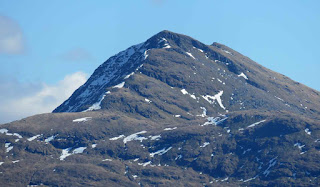 Ben Lomond, 974 metres, Scotland's most southerly Munro, seen from The Cobbler. One drawback of the internet is that you have to get here early on a good day if you want to find a parking place, despite a very large car park. We were lucky to get in, filling one of the last slots available. Hundreds of people were climbing up this hill and the surrounding peaks but everyone was friendly and in a good mood. 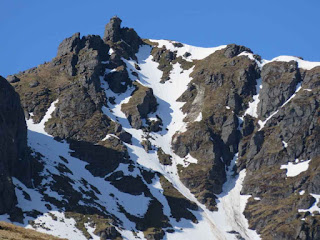 The summit cliffs had just enough snow on them to make it interesting and we were soon up on the ridge with a view across to the other nearby peaks. 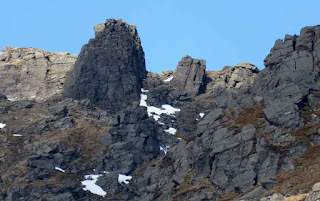 The summit cliffs under Beinn Narnain, 926 metres, another of my favourite peaks in this area with a hill-walker traversing under the rock towers. The best approach to this hill is from Succoth up the Allt Sugach burn to really see the finest features on this hill in its full glory. 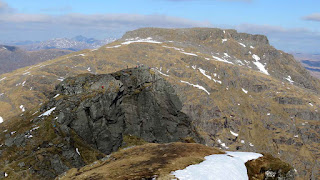 A photo of the flat topped but highly enjoyable summit of Beinn Narnain and the main rock climbing peak on the Cobbler. 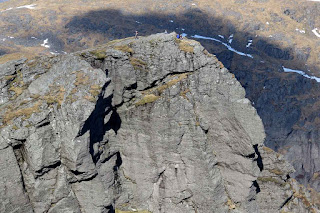 A close up view. The person on his own in black is standing directly above Punster's Crack, Severe. This is a weaving grandstand of a rock route as the last delicate pitch heads straight up a steep rock wall in full view of the masses watching nearby as you pick your way carefully up a seemingly blank face using bottle and will power alone. Or so it looks to the casual observer. Rock climbing on the Cobbler can be disconcerting as holds are either in sharp finger cracks, little wrinkles, raised quartz pebbles or on downward sloping edges. Comforting enough in dry conditions but after a shower of rain or when still damp the grade feels much harder as the rock surface has little natural friction then and the Cobbler was never my favourite place for attempting the harder grades. Being high up a sudden shower or even snowfall was always a possibility halfway up a climb early in the season. 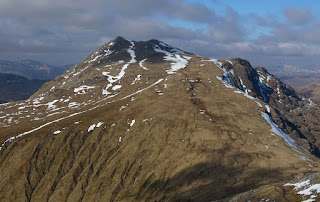 Ben Ime, at 1011 metres, the highest summit in the Arrochar Alps, a compact region of around a dozen tightly packed peaks. All are exciting venues for day trips, even the ones that are not munros as this area is renowned for its steep glens and rocky nature, home in the past to Clan MacFarlane. An area lovingly covered in Chapter Eight. The High Life, in my first book Autohighography. For people in the Scottish Central Belt, myself included, this was our first real experience of easy to reach higher mountains. Although a small clan they had a fearsome reputation for inter clan warfare and cattle rustling for which they were heavily punished and almost destroyed. Maybe the reason for this was that the steep sided Arrochar Alps district didn't lend itself to cattle grazing, especially in the winter months and even today the hardy highland cattle are few and far between in this area as is green pasture.
https://en.wikipedia.org/wiki/Clan_MacFarlane 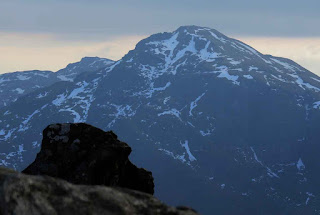 A look across at the 'lesser peaks' which always makes a mockery of judging mountains by height alone as The Brack,787 metres, Beinn Donnich, 847 metres and Beinn an Lochain, 901 metres, are below the magic 914 metre limit but superb mountains none the less. 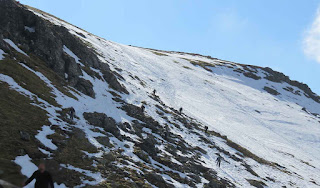 On the north side of the Cobbler a few people were wishing they had carried an ice axe up as this slope had firm snow lying out of sight of the road and it was still icy and dangerous if you slipped without a pole or axe to stop yourself. Luckily, several sets of bucket steps had been cut to follow to the top. 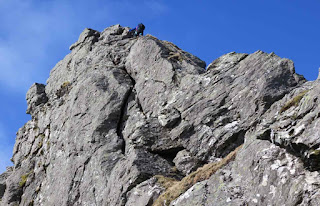 Even a few hardy rock climbers were out doing Ardgarten Arete then the central Cobbler peak, roped up as a pair to climb the longer unfamiliar side of the summit block. 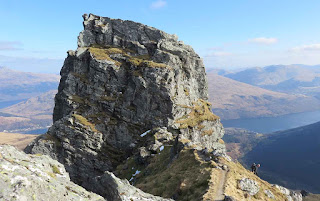 One of Alan heading down past the rock tower, the third of the Cobbler's half circle of peaks and the hardest to reach as a scrambler without a rope. Not recommended unless you have an excellent head for heights and experience at steep exposed down climbing since the descent is the really tricky part here. Being lower and harder this peak has fewer visitors. 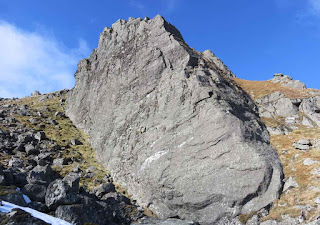 A view from the bottom looking up at the route of Ardgarten Arete. 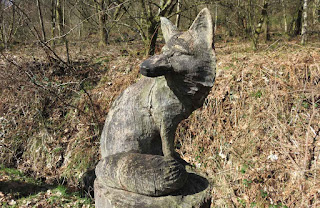 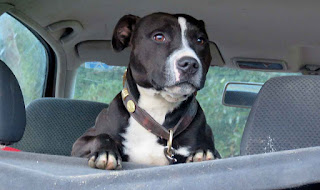 A happy dog glad to be going home after a full day... as were we. 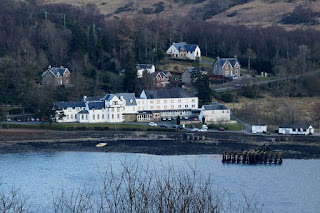 Arrochar from the descent path. 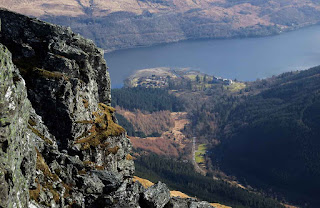 Looking down into Glen Croe and the road leading up to the 'rest and be thankful.' 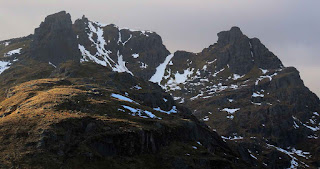 
I found this excellent video a while ago and it's a good visual account of climbing Punster's Crack. Takes me back to my own rock climbing days finding an improbable line up this intimidating cliff with many surprises on the way. Disconcertingly, from the bottom of this route the crux top pitch looks overhanging. It's not of course, just very steep. Like the musical tracks as well. This guy must be able to climb harder grades if he's relaxed enough to take his hands off the holds and balance near the top.

That Ardgarten Arete looks quite nice but I take it the problem is descending from it somewhere? or do you just abseil back down it? The other side of that peak looks a bit nasty!

I think I held my breath looking at your photos and I think I did the same watching the video. I better go now and breathe! HA!
This is so beautiful! Towards the end of the video, I noticed the climber doing what we call a "butt slide", which is what they do down the steepest part of Panola Mountain (not THAT steep, I walk down myself but tall people like my husband, come down crab style, I guess you would call it.!)
And I enjoyed the music too!

Excellent photos! I'd love to climb any of those mountains.

These are really breathtaking views. I'm sure they look even more stunning when you're right there at the top.

Hi Carol,
You can do that if you have climbed up the other side but some folk scramble up it from the short end then find they have an awkward, exposed and vegetated down climb. I've been up the other two Cobbler peaks many times but this tower only twice over the years as I don't like it for some reason, except to look at. Ardgarten Arete felt slightly disappointing too compared to Recess Route and Punster's.

Cheers Linda,
Yes, you would like our mountains on a nice day. Greater range climbers- The Alps, The Rockies, always get impressed by the steepness of our wee pimples as they feel much higher once you start to climb them from sea level.

Hi Lux G,
Thank you, Hope you are having adventures yourself.

I'm afraid that my nerves have never allowed me to do rock climbing. I did manage to thread the needle on one occasion so I can include the Cobbler in my list of hills climbed. On subsequent visits I have just admired the view from the plateau!

Hi Neil,
Never realized until I read it recently that the Cobbler is the hardest Corbett in Scotland to tick off due to its block summit scramble. That's what comes of not buying the Corbett guide book. I can think of many Corbett ascents I've done with Alex that felt much harder, albeit without a scramble to end with.

To be honest, I'd want a rope both sides of that peak - don't fancy scrambling either side - I'll never be brave off a rope I don't think!

Great photos. Very long time since I did The Cobbler (back in 1985!) on a grey dreary day. I remember the scramble through the hole and along the ledge to reach the central peak being rather interesting. Doubt I'be able to do it now

Hi Surfnslide,
Met Tom Weir (author, rock-climber and TV outdoor personality) years ago on the Cobbler and he went through the hole onto the summit without hesitation. I think it was to celebrate his 80th birthday as he had a few pals with him. Some achievement for that age and I can't see me repeating it even a few years from now as I remember it being exposed in reverse.