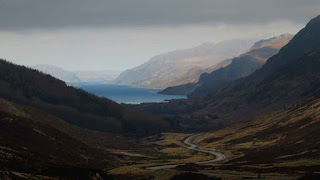 ALL PHOTOS CLICK FULL SCREEN
A last view of Loch Maree looking like an old Bible painting of the promised land. Certainly a beautiful loch and one of my three top favourites.
For the last three days in the far north however it had been very misty with poor John slogging up Corbetts on his own and me attempting to stay clear of the murk enveloping this area and take decent landscape photos. 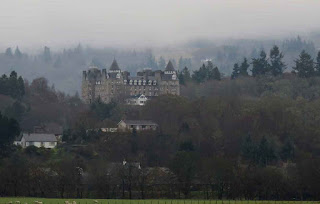 Pitlochry in the mist and a notable upmarket hotel sitting on its prominent elevated ridge. Only 200 feet high or so but everything above this height was invisible so we both decided it was time to move to a new area, although we liked our borrowed cabin accommodation. 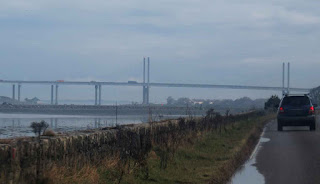 The Kessock Bridge just emerging from the mist linking the City of Inverness to the Black Isle. I have fond memories of the Black Isle as I've been on summer holidays here in the past in the days when a  busy ferry used to run across the Moray/Beauly Firth before the bridge was built and the Black Isle felt much more like an island. (It's not, just a long 20 mile fertile peninsula jutting out into dolphin inhabited waters of the Moray Firth.) As this large pod stays local to this area and can be easily viewed at the tip of the peninsula at Chanonry Point they are a popular tourist attraction. Killer whales and various types of cold water shark, some growing well over 20 foot long, swim around the Scottish coast but are rarely seen or heard about. Swimming in Scotland, even in summer with a wet suit on, is a minority sport as your body temperature soon drops in the freezing North Sea and surrounding waters.
Excellent short compilation HD film here that must have taken a lot of hours and camera/video work. Great facts on this unusual large pod living so far north in very cold water. 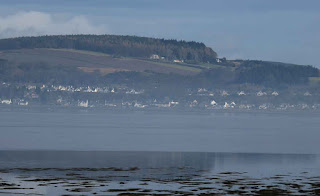 Even into the afternoon it was still hazy here and it took a long time to fully clear then it was back to early morning fog the next day. Probably the temperature difference between warmer land and cold sea causing it. 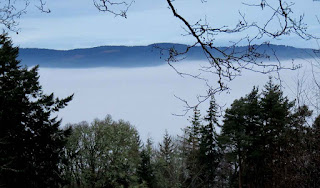 A morning view over the Inverness area. Normally this region is renowned for it's fresh clean air and sunshine but it's just the luck of the draw with any trip planned in advance as Scottish weather is notoriously fickle. The main thing for us though, being outside all day, is that it didn't rain. 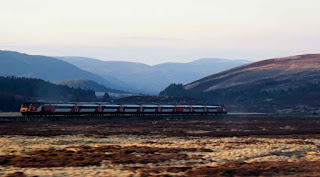 We decided however that a change of scenery was in order and in the Central Highlands between Inverness and Pitlochry, well away from the fog inducing coastline, we found the sunshine again. Train running through the Central Highlands. i.e.- this is in the middle part of Highland Scotland. 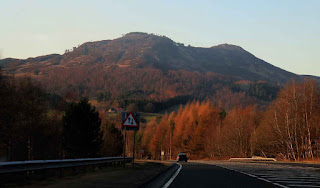 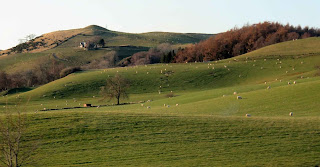 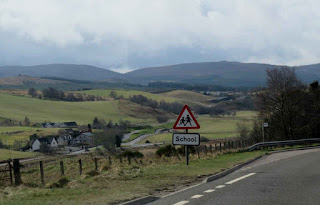 And another different aspect of the Central Highlands. 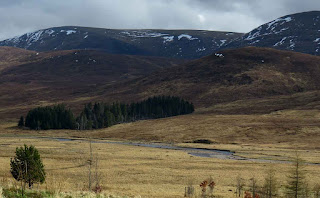 Unlike the highly dramatic and steep sided mountains of west coast Torridon featured two posts ago on this blog the Central Highlands have a very different look. More moorland in nature but equally wild and empty with many of the summits rising between 3,000 to 4000 feet but they don't appear higher than Torridon because the hills there start straight from sea level and rise vertically whereas here they tend to be hidden back and gently rolling upwards from an already higher inland plateau. With nothing much to look at however in often featureless uplands and usually longer walks in to reach the hills these hills often feel harder without the adrenaline rush of fear in exposed places. In winter or grim weather however these hills can easily kill the unwary as habitation and shelter can be spaced far apart. 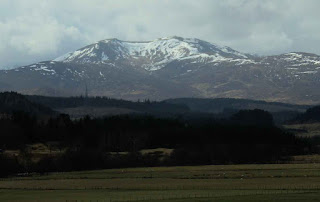 They also tend to hang on to snowfalls longer than the coastal regions. I remember one Easter wading over the hills here through waist deep snowdrifts on a three day bothy tour situated in different glens/valleys that was pretty tough going underfoot but certainly lingered long in the memory afterwards as a real backpacking adventure. 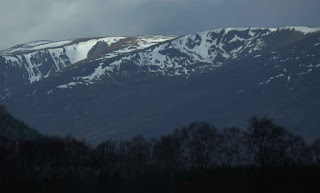 John's hill of choice was another Corbett in this area and happened to be close to a bothy we both knew well. This is one of the very few bothies you can actually drive in to, within half a mile or so of, so we were really cheating here to avoid the usual long walk in normally associated with peaks within this district. 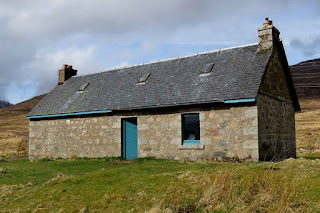 Pleased to report it was still in cracking nick. As usual I won't name it here. Rio Tinto Alcan seem to be the owners of the estate it sits within, an international aluminum producing mining company with long standing interests around Lochaber and Fort William. 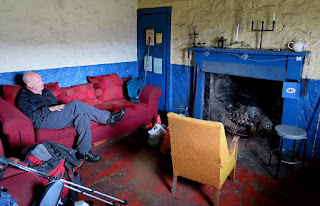 A rest inside the bothy before John headed off to go up his Corbett of choice. As it looked a long boring slog over uninspiring slopes it was not my choice however so I stayed behind and became a hut bunny. 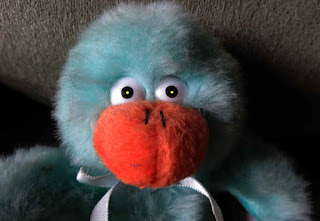 A rare selfie of my inner soul. Sums me up perfectly I think. This is where not bagging the Corbetts comes in very handy. If I don't fancy the hill much or the weather is grim I never feel obliged to go up and instead can pick something more interesting to suit my own tastes. On this occasion it was collecting water from the stream, gathering firewood from fallen timber in a nearby wood then reading a paper in a deck chair outside the bothy, enjoying the spring sunshine. 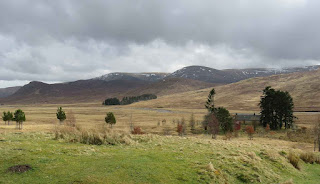 And what a view it was. Dramatic scenery in weather like this but also an area that can appear really bleak, open and desolate within a short space of time in grim conditions. 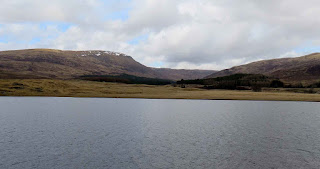 Very open and exposed during the frequent rain storms that lash Scotland off the wild North Atlantic Ocean. 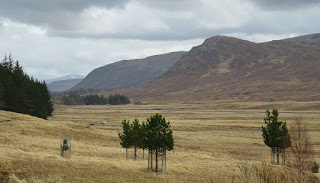 Looking down the glen from the bothy door. 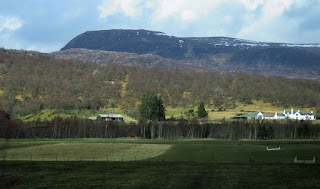 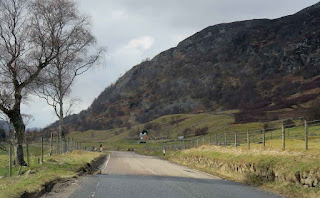 Near Jock's Spot, a popular climbing hut we've booked in the past. 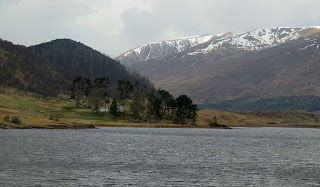 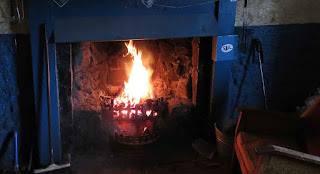 And a good fire at night thanks to my gathered wood supply. 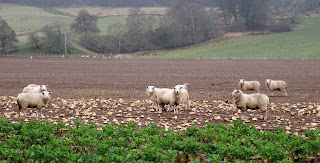 Sheep munching turnips or 'neeps' before lambing, provided by the farmer to give them extra vitamins and goodness for producing healthy little lambs. A common sight in early spring in the countryside just like daffodils and tulips are in the parks. A great trip, good company, and just a shame Alex didn't make it along as well.

I really enjoyed the dolphin video, and your photos are beautiful! I feel as though I am there myself! Thank you so much for sharing.

Thanks for another tour through your lovely countryside. I know how you feel about rain-less days - here in Portland a good weather day is one where it doesn't rain!

A great photo tour of the Highlands there Bob - the first image is one of my favourite views in the country....in some ways a pity it tends to flash quicklly past now that the "Golden Road" has replaced the singletrack.....

A bothy with a sofa - very luxurious!

Hi Linda,
some of the dolphin videos online are great and it was good to find a short one full of interesting photos and facts.

Cheers Linda W,
Sounds similar weather to here and you probably get coastal fog/mist as well rolling inland at times like we get up the east coast with warm land and colder ocean. Aberdeen is famous for it as well as the northern lights.(as in an old music hall song)

Cheers Ian,
First motored down that road towards Loch Maree with my parents under blue skies with the loch sparkling sapphire and the shores ablaze with green and gold (pine trees and flowering yellow gorse). I was around 19 or 20 then staying in the Black Isle for the summer and it made a huge impression on me as real wilderness, more powerful than anything else before. First sight of Liathach and Slioch completely stunned me as well.

Hi Andy,
Unfortunately, I picked to sleep on that sofa rather than the stone floor and I could watch the fire burning happily as I dropped off. Only in the morning did I read the bothy book about a guy complaining of dog hairs over everything when he visited a few weeks before. Don't know whether it was that or just bad luck but I had numerous bite marks when I returned from that trip. Mind you, I always get bitten in the Highlands by everything going anyway. Animals, birds and insects always seem to love me up there.

I can never understand how sheep can eat raw neeps with only one set of teeth!

By the way, as you're an old bothier, did you ever know of the bothy at Shinagag/Shenagag mentioned in 'Mountain Days and Bothy Nights'? I suppose it's just a ruin now?

It's difficult finding an area to go to for walking when the weather changes so much, as it seems to have done for most of this year. I'm reluctant to drive all the way to the north-west when the forecast is only suggesting one good day's weather. The downside of not travelling is that you can miss some cracking days out! That's April almost done and we haven't had a good settled spell yet.

Hi Neil,
for me the real upside of not bagging in mountainous districts very often is that it's generally much sunnier now week by week and I cant remember the last time I got soaked on an outing- probably over six years ago. With petrol being the price it is myself and most of my friends cant afford to go up north very often so it has to be worthwhile as you say with a chance of excellent weather.