Glasgow. Metropolis and Hills Beyond. Snowfall. Colleges and Universities Gallery. Part One. 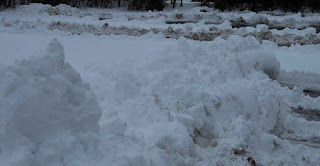 ALL PHOTOS CLICK FULL SCREEN
A gallery from March 2018 taken just after heavy snow falls in the city with many main roads closed, most traffic at a standstill, and people opting to leave their cars stuck at home to walk to the shops as many side roads and retail parks had up to four foot of snow, lying in drifts, covering them. 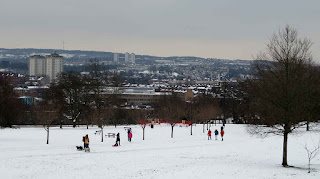 Opting to leave my car at home myself, in case I got stuck or had a slide/ traffic accident on ice/snow covered roads as soon as the public transport came back on and I had a free day I took a bus over to the south side of Glasgow to visit Queen's Park. This is a view from the flagpole summit towards Castlemilk. Most of Glasgow and many of the city parks are built over drumlins, small hills a few hundred foot high resembling an upturned egg box carton containing 50 or so eggs with a city built over it. 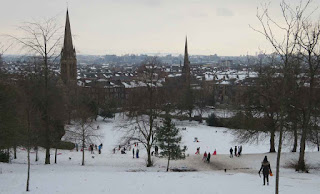 As a result many of Glasgow's Parks have outstanding views... and great sledging hills ...which was one reason for coming here with a friend. It wouldn't look very cool for adults without children to enjoy sledging on their own so I had a cunning plan B which involved two rolled up DIY flexible sledges which would easily fit into a rucksack and stay hidden but could be  pulled out and used when required.
I have not lost my inner child altogether and managed to find quieter, steeper slopes where no one could see us in action.
Surprisingly long descents followed from summit flagpole to the bottom and great speed was achieved at times on what was basically two strips of tough plastic and old shower curtains with no brakes. Must have been close to a couple of hundred foot of descent or more and a long walk back up again so only a couple of runs before we packed in. Good fun though. 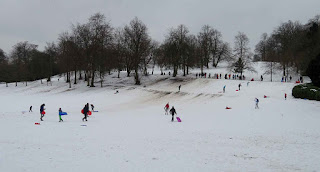 This is the popular area of the park with families having fun- needless to say it wasn't down here we carried out our furtive runs as swerving and stopping once started proved problematic. It was also far too flat here for adults used to proper mountain sports in the past. I'm not going to put my greater ranges bottom on anything slippy unless I'm travelling at a suitably decent velocity to impress onlookers.  I have some pride! 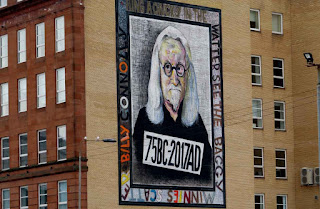 The other main reason for the trip was to capture some great photos of the city and the different feeling that snow brings to any place and transforms it. Billy Connolly mural here. Three of these large gable end wall murals of B.C. adorn the city centre. This is the last of the trio to be on the blog. 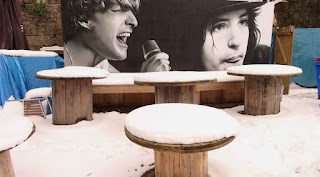 It's funny that people will travel halfway round the world to sleep in ice hotels for the novelty value alone but no takers here for a fresh air pint outside, served on a snow covered table and chairs. 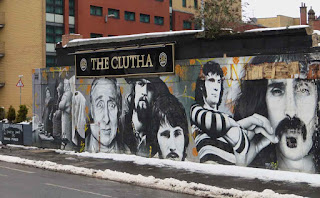 The nature of murals is that they are temporary projects which usually have a shelf life and this spectacular example is showing signs it will not last forever at low level. Shame, as it is a cracking example of good popular art in the city. 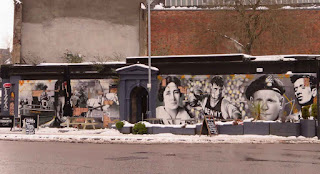 The front of the pub after winter snows. Tables arranged outside during below freezing temperatures seemed a tad optimistic to me but smokers are well used to being punished outdoors I suppose since the indoor smoking ban was introduced. 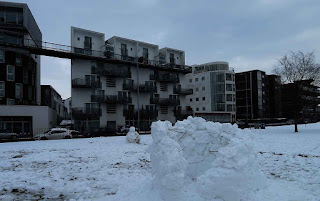 Glasgow Green with a DIY version of an ice hotel. As the Clutha bar is a five minute walk away it has full facilities.  i.e. food and drink nearby. Soon have the roof on this igloo then it's open for tourists. 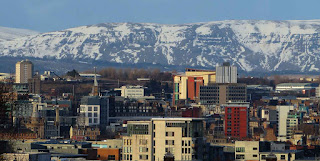 The main reason for the trip however was to take interesting photos of the 'city in a bowl', surrounded by a wall of snow covered cliffs. Being March and freezing weather the air quality, visibility and snowy backdrop all combined to make great unique images of the metropolis I call home.. That and an excellent photographer in the right place at the right time. Yes, that'll be me folks :o) 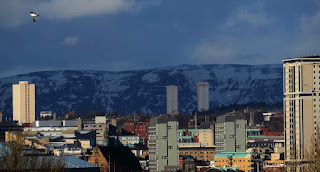 It's not just random snaps I take either...oh no.... I do wait patiently for all the right elements to come together. Not enough gulls in this one and flying in the wrong direction. i.e. out of the photo. 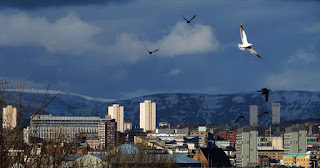 A short time later, a slightly different angle, a touch of 'magical thinking,' i.e. some tasty bread thrown down... and all the stars align. Cliffs still in shade... lead gull in sunlight... buildings in focus and pin sharp capture. A happy moment for me. I may be crap at it compared to a paid professional who has to master a wide range of techniques and different equipment but I take it seriously enough as I hobby. And being a hobby, without any time pressures, deadlines to meet, parameters to fit inside, or rules to follow other than my own I still get to enjoy it. 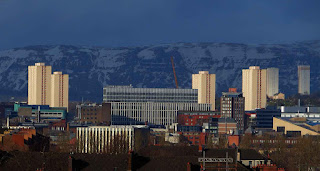 Slightly different lighting effects here and the bold straight lines of the City of Glasgow College. Although Glasgow has three separate universities it also boasts a number of mega colleges, old independent institutions in different parts of the city/ other outlying districts and towns, that have grouped together as several separate buildings in different locations under one umbrella college group name. You can see two of them here, one up on the hill, and one down at the River Clyde. Under a mile apart in this case-both newly constructed buildings. Judging by the sheer numbers of purpose built student accommodation to go with it constructed in recent years within this particular metropolis Glasgow must be one of the top teaching cities in the UK. For this level of investment over the last decade it must also be very profitable I'd imagine. Swapping an industrial past for technology and knowledge based industries. Or maybe it's just because old buildings don't get very reliable Wifi signals with thicker walls and ceilings and the city has to compete with many other continuously advancing structures elsewhere around the world so is forced to modernize from the outdated buildings to attract new students? For me its the changes to the skyline that impress me most. Every couple of years a different look- a new building springing up. Mostly replaced hospitals, schools, colleges, universities and upmarket estates/ upscale apartments making use of newly vacated classic old properties. As in Donaldson's School through in Edinburgh a few posts ago or the gleaming glass towers of Quartermile in the same city cleverly morphing into the guts of a still standing old hospital like something from a Dr Who script.. 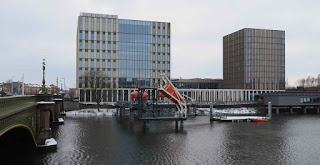 City of Glasgow College by the river. This is where the nautical department resides, training individuals that could end up working in shipping all over the world, hence the emergency life-craft boat launcher to practice escape drills on.

One of the western side of the Campsie Fells and the rounded lump of Dumgoyne. 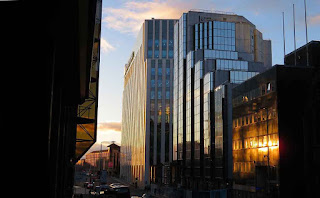 The modern 'Dragon's Breath.' Sunlight hitting the windows of the Scottish Power building that supplies our energy needs so quite appropriate really. Along with the City of Glasgow College two of the biggest large scale additions to the skyline view.

Well seen in this distance photo of the city centre. 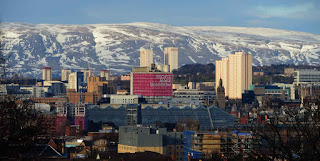 And one of St Enoch's glass roofed shopping centre, George Square, and the Campsies behind from Queen's Park. 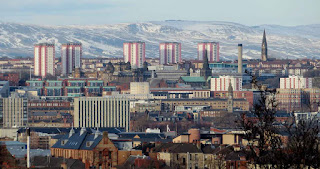 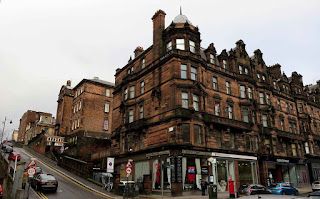 One of the rolling streets of Glasgow's city centre district with red sandstone tenements climbing over a drumlin. 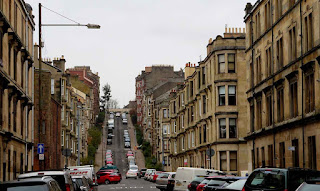 And another street in Partick a few miles away. We also have flat level streets in the city but a fair number look like this. Think San Francisco - Glasgow style. 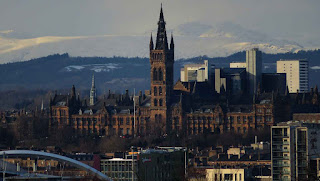 The University of Glasgow with the western edge of the Scottish Highlands behind. No surprise they have well established walking and climbing clubs here with mountains on the doorstep. 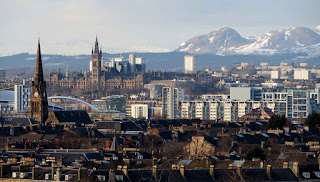 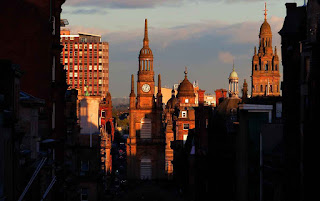 Sunset hits the towers and spires around George Square. 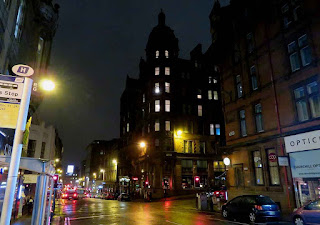 A cracking day and night out. Thank you mystery companion :) 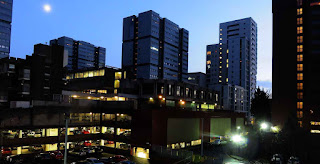 The late Alex Harvey was a Glasgow legend famed for his love of showmanship. musical theatre, encyclopedic knowledge of old songs and comic books. He combined all these elements together in the early 1970s to create a rock band that evolved like no other. As seen here.

Fabulous views of the beloved city!

Not cool to sledge?? Read my article on sledging on Blencathra - everyone thought it was way cool I was sledging down the back of the mountain from the summit - including the young. You can sledge on your own without having to have children with you - I've been doing it for years now!

When you say 'Billy Connolly murals', what do you mean? He's in them or he painted them?

How fabulously you have captured the Campsie Fells, but how strange to see snow again. It feels as if the snow was many moons ago, but in fact it is just a matter of weeks.

Who doesn't love a snowy day in the city? I'd be sliding down those hills right beside you, :)

Hi Carol,
I remember reading it very well. I'm a middle aged single guy. I'd get arrested if I started mingling with children and families.
Three commissioned paintings of Billy by well known artists Jack Vettriano, John Byrne, and Rachel Maclean were scaled up into giant gable end murals by street artists who have experience of filling three and four level high tenement walls. They were painted for his 75th birthday as a tribute from his home city. He also has smaller works in Glasgow and Paisley (Clutha Bar and Brown's Lane- beside former band mate Gerry Rafferty)and a wall sculpture in Anderston, where he grew up.

Hi Rosemary,
It was nice to get snow on them at just the right level- too much and you don't see cliffs and gully lines properly or washed out summer haze diffusing them. As we have had a prolonged dry spell up here and the ground is baked hard it was a mental substitute for rain. Three weeks without any falling is practically unheard of in Scotland. Any young frogs in the Highlands will be crispy as the bogs have dried up.

Hi Linda,
It was fun and a handy substitute for proper skiing travelling on a city bus.

Great pictures and memories of the harsh winter and the yo-yo of cold/hot weather that followed it. After my city trips of the past 12 months (and your blog!) I have a much greater appreciation of urban landscapes and find them as if not more interesting than mountain landscape images

Hi Andy,
I enjoyed your London tour with your family. I've always loved exploring all kinds of places but from my own experience most people stick to one thing so I've had to do it alone mostly. It's not always easy to find like minded companions over the years so having a family that enjoy things like that together is a big bonus while it lasts.
Best wishes.