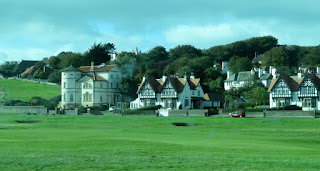 ALL PHOTOS CLICK FULL SCREEN.
A phone call a few weeks ago from my friends John and Gail who asked if I would like a trip with them out to Gullane and Aberlady Bay. This was sheer coincidence as I was thinking of going there myself to fill in another part of the John Muir Way between Edinburgh and Dunbar. I agreed at once therefore and we set off on a weekend jaunt to Gullane, seen above.
Unlike many of the post industrial towns and villages that are found along this coastline Gullane is very well heeled and has been for a long time. No suggestion of heavy industry or ugly factory units here. It's a 'golden bubble' sort of place, full of wealthy individuals settling here for the lovely scenery, peace and quiet but close enough to Edinburgh (half an hour's drive by car)  to still work in the city and earn good money to maintain this expensive lifestyle. Kilmacolm, on the west coast near Glasgow, could be its twin sister. I've always found these places fascinating, even as a child, a real life Disneyland with princesses, kings and queens holding court but having worked in maintenance for many years I know what it takes to upkeep properties and gardens of this size so it's not for me at all. A boat anchor. I've always been happy enough enjoying myself on a tight budget with little outlay or upkeep required and have never had the necessary personality, drive, ambition, brains, contacts or education to be a captain of industry and high achiever.  But I do like to dip into these places in passing. Well, you would, wouldn't you? Who doesn't like a fairy tale? 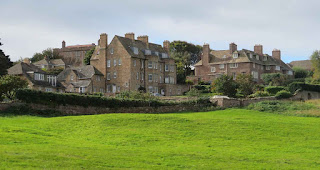 Gullane from the back end, facing the sea. A large car park here was our meeting place, as Gail had arranged to find her fellow geocachers here. It was a large assorted crowd of  various adults, children and dogs so a popular hobby. Everyone needs a purpose in life as without it humans tend to drift. You do need focus and hope whether that be the eventual prize of a large mansion in the country, advancing steadily in your chosen career, or simply taking better and better photographs in my case :) etc etc. 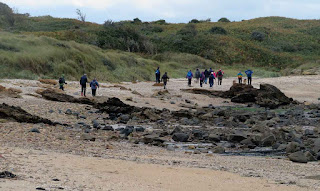 I was expecting a leisurely stroll but it turned into a speed march along the beach for several km- hard to keep up when 'Scotland's Greatest Living Central Belt Action Photographer' (Snap, Shackle and Pop magazine 2018 awards*) had so many different subjects to chase after and capture at the same time. A challenge worthy of my ilk. 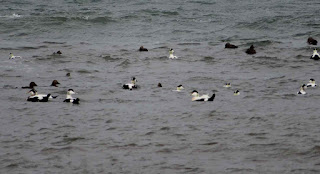 A raft of male and female eider ducks here, sheltering from strong winds and choppy conditions. 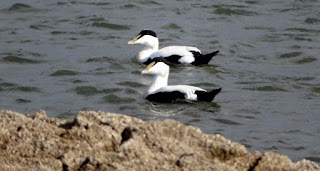 Two males in close up. 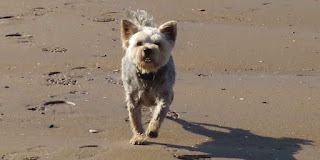 A friendly wee dog coming over to say hello. 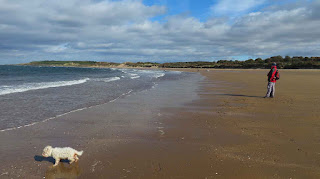 John on the beach at Gullane. 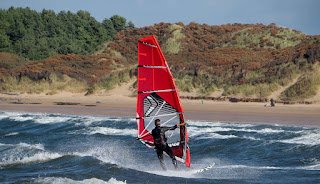 What he was looking at. A windsurfer. It takes a really good photographer to get close in behind a windsurfer in action heading for the beach... ie photo taken from further out into the open sea. No islands near here. A mystery accomplice perhaps?. 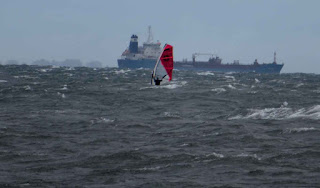 Further out towards the shipping lanes. Rough sea conditions. 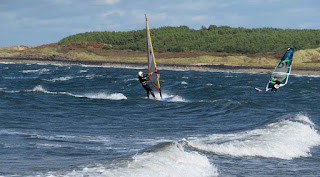 But good for jumping waves. 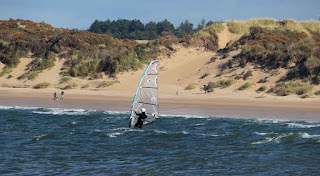 The sand dunes at Gullane beach. Traditionally, this is one area with sand stretching many miles inland--- Gullane is famed for its golf courses so keen golfer and Edinburgh born comedian Ronnie Corbett called this place his second home for many years away from work in London with world class courses on his doorstep and dozens more under an hour's drive away. 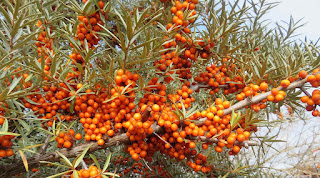 Sea buckthorn was planted to try and stabilize the shifting dunes here but it's now everywhere along this stretch of coastline so they are trying to control it. Pretty berries though. Colourful. 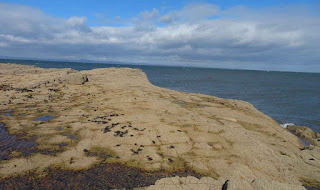 At the Hummell Rocks area I found this flat pavement jutting out to sea where a rocky band separates Gullane Bay from Aberlady Bay. It made a nice contrast to sandy beaches striding across here but you would not like to trip and fall anywhere. The white coating on the rocks is this stuff- tiny white barnacles that are razor sharp on unprotected flesh. 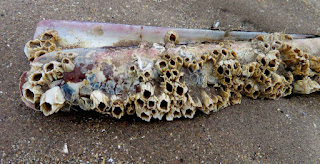 Painful even to lean on jumping off this raised platform back onto the beach. A razor clam shell coated with the same type of barnacles. 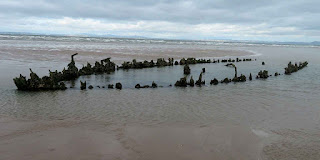 Aberlady Bay is vast and empty at low tide, a wildlife estuary stretching for miles across flat sands and popular with geese and birdwatchers but the reason the geocachers were here was to visit these oddities. A shipwreck and the remains of two mini subs. 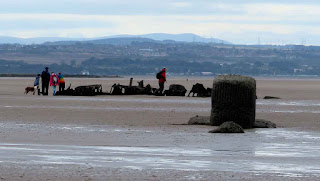 These midget submarines were used to train up the teams to sink the German battleship Tirpitz and dumped here afterwards. They were usually towed towards the intended target behind a conventional sized submarine then let loose for the secretive stuff, creeping towards their objective, hopefully by surprise. 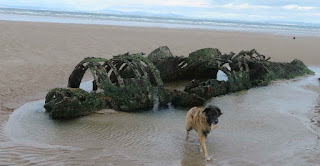 The main reason for the speed march is that they are only accessible at low tide. 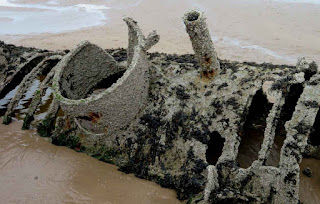 A good view of the hatch and periscope? here.
Over ten years ago I explored this coastline by bike, cycling all the beaches at low tide and having great fun. Rather than hours of walking I found you could really fly along the hard packed sands at speed on a smooth tyre hybrid bike. Obviously, I steered clear of any bird life ahead in the distance and hardly made a mark on the ground. I discovered through trial and error that mountain bikes dig into the sand too much and are very slow, almost faster walking. I could get up real speed on a touring bike with smooth tyres here though given good sand conditions- almost like Bonneville salt plains car racing with a strong wind behind you tearing along close to the waves- yet I never spotted anyone else cycling across sand flats or beaches for years. The only one doing it, as usual, was me. The maverick unfashionable nutter.  I have the posts on BSS to prove it from the early days. And raved about how good it was then!!!
So it was with something of a groan that I've noticed a new trend developing recently. Fat Bikes- mountain bikes with very thick tyres around five inches wide, presumably developed as all the popular mountain bike trails recently I've seen are completely trashed into muddy ruts and swamps, even in summer. Big tyres are the new off road trend seemingly and I noticed them again here. Compared to my hybrid touring bike however the speed they were doing across the sand flats was about a fifth of my own so I can't see them lasting, long term. Mind you I never thought anyone would be daft enough to pay for water in bottles,  or choose to watch entire films and videos on a small hand held screen either so what do I know.
Guess I'm an accidental trendsetter in many different ways. AND I'M NOT HAPPY ABOUT IT!!! Contrary? Moi? 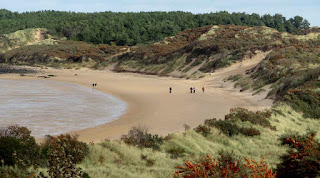 Anyway, it was nice to have some company after numerous solo trips and everyone seemed to enjoy the day out. Four young folk here on fat bikes going across Gullane Bay sands. Ggrrrr. I did it first- and much faster- and cheaper.... I'm a legend I am. :o)

This link is worth watching. The Longest Road in the World which took three years to complete driving north the entire time. Eight minutes long but as enjoyable as any of the Top Gear challenges. You have to really admire this young person's optimism , his determination to see it through, his cheerful disposition and his style. A natural presenter and a skillful filmmaker. If you only watch one You Tube video posted on here make it this one. Epic, funny, inspirational, and extraordinary.

Sea buckthorn is apparently the next 'big thing' so you Scots could be in the money! ;-) Wouldn't fancy windsurfing at sea - very scary - I'd stick to lakes and reservoirs I think (not that I've ever tried it - wouldn't mind a go).

I hope you used to wash your bike off well after using it on sand - very corrosive indeed. We used to take my trial motorbike, Millie, on the beach and sand dunes but had to clean the air filter and give her a good wash down afterwards - all that salt!

Sad they used to scuttle ships and submarines deliberately :-(

Lovely. Another place i’m Not very familiar with.

Wonderful photos of your beach walk, especially the action shots of the windsurfers.

I don't understand just how you captured that photo of the surfer - are you going to reveal the secret?
It looks a lovely piece of pristine coastline to explore, but shame about the fat bikes, they are everywhere these days.

Hi Carol,
I'd be amazed if the local entrepreneurs aren't using it already in some way. I used to work in Bearsden/Milngavie districts and a fair percentage of the large houses there were running one or two different small businesses from home and that was before the internet made it easier to do.
Bike....I did.

Cheers Anabel,
apart from lovely beach walks not as much to do there as its mainly an upmarket commuter town/village. Streets of large houses and a few local shops.

Hi Linda,
Yes, it's always a bonus if you get interesting sports happening around you as a photographer. Really good spectator sport as these sail boards can really shift along. Racing from the beach to a mile off shore in under five minutes given good conditions. Kite surfing looks great as well- even more extreme.

Hi Rosemary,
Hummell Rocks is the answer. From the tip of the rock platform you look straight back onto the beach and surfers at an angle so it looks like you are on the waves together.

I didn't know about the two X craft wrecks at Gullane Bob, a nice bit of history. The submariners who operated them trained in various sea lochs including Loch Striven - I can only imagine what they must have been like to operate.....

I could do with an official photographer for when I'm out kayaking on the surf. I do capture my own go pro shots though. Here is one of better efforts