ALL PHOTOS CLICK FULL SCREEN
A very different post this time as I was asked by a friend to wait in a certain house for a couple of important parcels being delivered while they were otherwise engaged and away. I took a book with me that I thought I would like about spy activity in the present digital/Facebook era but it was pretty dry and highbrow stuff and after 50 pages or so I gave up. Worthy but dull.

As I was sitting out in the garden with a fine view of the flight path for planes flying into Glasgow Airport my attention soon shifted to that and it became a game to see how many I could spot and capture. I did not have long to wait as they glided past every couple of minutes during busy periods in the early afternoon. Two different Emirates Airlines planes here. They also have the world's largest commercial planes in their fleet, the mighty Airbus A380 flying twice daily between Glasgow and Dubai. 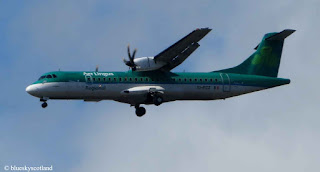 A favourite with me. Aer Lingus plane flying to Dublin and Cork. As I've not been on most of these planes it was interesting to find out where they were going afterwards. Traveling the world by armchair and camera. If you can capture the plane number you can find out where they are going so entertaining detective work online. 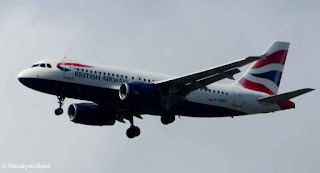 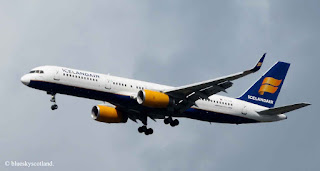 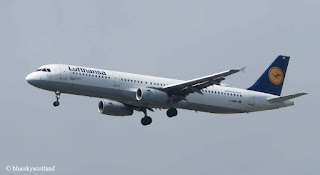 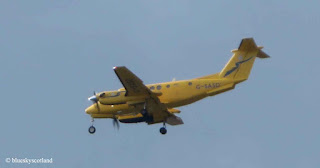 Scottish domestic internal flights to Stornoway, Inverness, Aberdeen, Campbeltown and London on this Beech B200c Super King plane. Same type used by the Scottish Air Ambulance I believe? Both same code/ plane number which is slightly confusing- at least to me. Commercial flight or air ambulance? 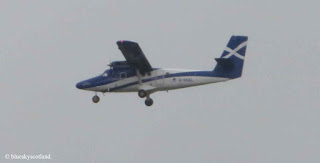 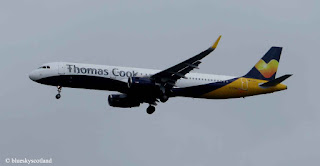 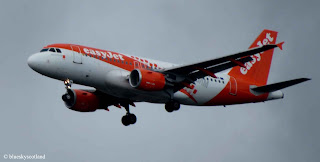 Loads of different aircraft as well. 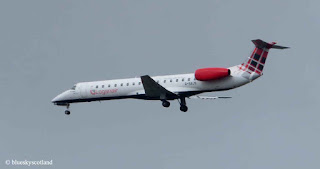 A range of planes with distinctive tartan tail fin markings. 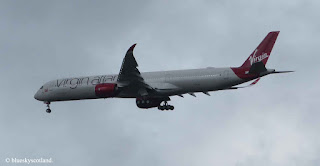 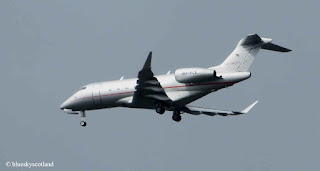 Looks like a flybe type aircraft but unmarked- Maybe flying the same type of business clients as Vista Jet. 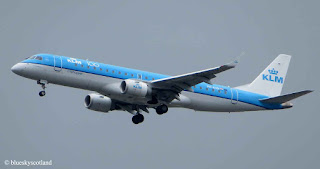 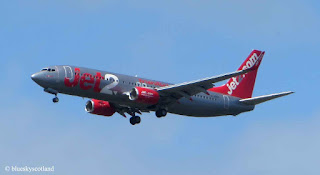 Jet2.Com. Cheap flights all over, Italy, The Med, etc. 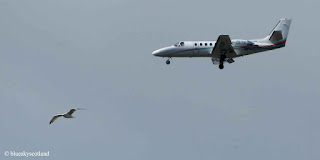 Another private light aircraft. Maybe UK based private jet charter. High status celebrities, business clients, etc. A good haul for a few hours and it passed the time until both parcels arrived. Job done I left. 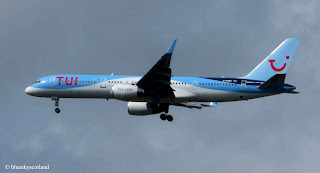 Later that night I watched Goodbye Christopher Robin, a recent film based on writer A. A. Milne's difficult relationship with his young son. Considering this is the man who wrote Winnie The Pooh, an eternal children's classic it's a sad, complex tale of parents who might as well have lived on Pluto for all the warmth and interest.or compassion they bestowed on their young son. At least in this film version anyway. Fairly typical of upper middle class parents of that time period they lived mainly detached, separate lives from their offspring, despite the apparent love and empathy evident in the books. Young Christopher was brought up by a nanny- (a star turn by Kelly Macdonald, one of Scotland's finest acting talents.) then packed off to boarding school until he reached adulthood. Due to the fame of the books he had a problematic, unhappy time there and all the real warmth and love within the film appears in his instinctive natural connection with his down to earth nanny, not his aloof, stiff upper lip father or remote disconnected mother- a far better and more attentive influence throughout his life than the emotionless, stilted, self centered, and largely absent parents, according to the film. It reminded me of Enid Blyton, another prolific children's author, who apparently had little interest or time for her own children- or maybe that was just the way it was in middle class households back then when parents led mostly separate lives from their children, if they could afford servants to look after them.
Although my own parents were not touchy feely types or very demonstrative I always knew I was loved, wanted, and cared for and despite growing up in a fairly rough deprived area I've often found warm hearted adults and children in abundance there, and throughout other districts in other cities worldwide and a great sense of fun, empathy and community: especially in the past when people had less possessions within each household to look after and had to depend far more on the kindness and understanding of similarly placed neighbours living around them. 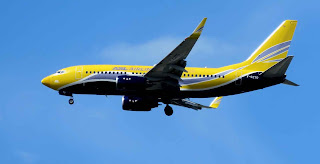 French Airline. Glasgow to Paris and Canada apparently. Like the colours. Zingy!

The kind of repressed, stilted emotion, evident throughout the film is a completely alien concept to me, much rarer in working class districts I believe. Generally, they do not hide their hearts or emotions away behind a polished glass case. If they don't like you they'll soon tell you straight up to your face-without necessarily being rude about it- just matter of fact, letting you know where they stand... if they do like you then they let you know that as well. It's far more honest, speedy, and direct. Maybe having more money, personal independence, and as a result, less reliance on the charity of others, is the changing factor in society and communities.

Maybe the Twin Otter was going to Barra. I’d like to think so. I find that kind of family relationship baffling too. I read a lot of Enid Blyton when I was young, including the two series set in girls’ schools. I loved them, but underneath was terrified i’d be sent off to boarding school! Of course, it was out of the question even if my parents could have afforded it.

You caught these planes really well, but I personally couldn't cope with having all of that air traffic flying over my home continuously.

I'd have been fine being born to a middle class family back then - my mother was always disappointed that, while my brother would come for a cuddle, if she tried to even touch me, I'd shrink away (I still do that - I only let people I'm dating cuddle me).

Great post though - sorry to see Loganair seem to have lost the Hebrides contract. Virgin have likewise lost the West Coast mainline (railway) contract after all these years which I find fairly sad.

Love the seagull competing with the turbo-prop - and the new Loganair livery and extension to their previous destinations.

Richard is a plane-spotter and I love sitting watching them taking off and landing all day - never really bothered where they're going but used to love the different makes and identifying them when there was a bit more variety. 707s and Viscounts were my favourites :-)

Hi Anabel,
Yup, according to online info it goes to Campbeltown, Tiree and Barra. Would not fancy it myself but Boarding School must still work in the modern age though as it's a tried and trusted method to make sure a tiny elite still retains complete control over the masses. It did have a shaky blip in the last few decades after the 1960s but it's now as powerful a system as ever for ruthlessly maintaining the apex position.

Hi Rosemary,
Anne's house sits on a hill looking across and up at the planes but they are not as close as the photos suggest so you do not really notice them coming and going after a while unless you deliberately look out for them as very little noise is produced. It's nice on a clear night to watch them silently gliding in all lit up, wondering where they have arrived from. Now, with a bit of detective work, I know.

Hi Carol,
I was much the same with any parental show of affection as a child but as I said I knew I was loved and cared for as presumably you were. In the film version young C.R. didn't seem to have any same age friends as the cottage was remote, his parents were mostly absent or unavailable writing, pursuing their own interests, and his only companion was his nanny and soft toys. He was then packed off to boarding school where he was bullied relentlessly because of his book fame as 'the kid that played with stuffed animals'. Enlisting and fighting in WW2 leaving boarding school was suggested as a better period compared to his isolated childhood. At least that's how it was portrayed in the film. As I say, a good well acted film but also a sad one, especially considering how uplifting the pooh books are for children and adults alike. Instant worldwide fame is hard to deal with at age I'd imagine. He may have been happier with me and my mates in relative poverty, exploring old flooded quarries, old mansion houses, and following streams as we had dozens of real life 100 acre (aker) woods to play in.
(fade out to a beatles lyric- guess which one? :0)

By the way- I'm a real man I am- you wouldn't get me within a mile of a stuffed toy :o)