Helensburgh. A Date With Storm Ciara. 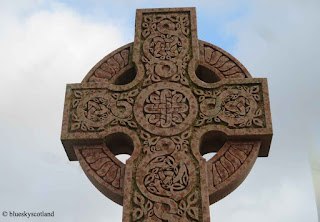 ALL PHOTOS CLICK FULL SCREEN
While I wouldn't normally be excited to visit a 7th century middle aged Irish abbess this particular Ciara was an Atlantic storm, predicted to hit landfall over Ireland and the UK, bringing strong winds and gusts approaching 90 miles an hour with flooding likely due to high spring tides. (Spring is in early February now?!!! Who knew!!!) A Celtic cross in Helensburgh, above. 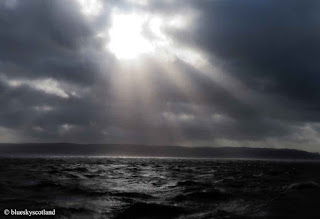 As this popular seaside town wasn't too far away, a half hours drive in the car from my house in Glasgow, I decided it was worth checking out. I hadn't been to the coastal resorts during a big storm for a few years now so I fancied a return visit. Ciara- pronounced Keira, as in the English version, is still a popular girl's name in Ireland along with a host of other Irish names for men and women in Gaelige (Irish Gaelic) usually hard to spell and even harder to pronounce as they often have little in common in speech version with the letters written down on a page. So you got off very lightly with Cee- ah-rah.  For instance- Irish singer Enya's real full name is Eithne Padraigin Ni Bhraonain and I'm not going to make any attempt to pronounce that phonetically. It's got to come from a Gaelic speaker to sound authentic and natural anyway. 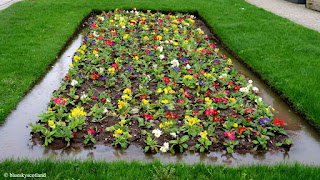 I'm pleased to report Helensburgh got off fairly lightly as well although some of the seafront gardens took a drenching. Being normally a sheltered location within a sea loch, a finger of the Clyde estuary, it's not as exposed as the Ayrshire coastal towns and nothing compared to the west coast of Ireland, open to the full power of the Atlantic storms across a wide ocean- large impressive swells hitting the cliffs there even in calm weather. Flooded spring primulas here but it's rainwater inland so they should survive the moat treatment. 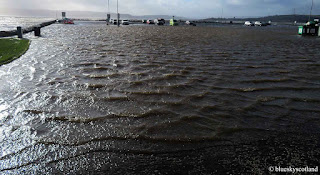 When I arrived at the car park in Helensburgh it was to find parking places already limited, quite a few cars stranded but luckily on a slightly raised platform of dry ground with a foot of water in between to reach the road. Most folk caught out just left their cars where they were rather than risk a deep water traverse but a few brave souls, with suitable all terrain vehicles got out. (The waters did subside when the tide turned.) 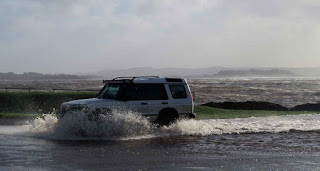 A vehicle with a high undercarriage makes an escape. 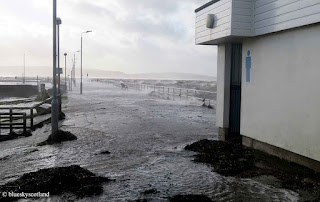 Not wanting my car to get soaked in salt spray, which is very corrosive, I parked well away from the water on a dry area. Even getting to the toilets was problematic though, the entry door washed with waves and seaweed, but luckily an upward fight of three steps inside stopped any flooding further into the interior. I came fully dressed in boots, waterproofs, and hat so this was easy for me. A coastal storm veteran of many decades experience. 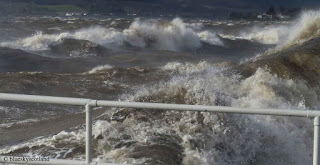 Having crawled up dozens of summits in high winds in my hill-walking days I've also got no problem standing knee deep in the sea or getting wet with spray as long as its safe and a good photo opportunity. As you can see from this photo though you have to be very wary of thrown pebbles and seaweed  in the waves as they can get flung with some force a considerable distance inland. 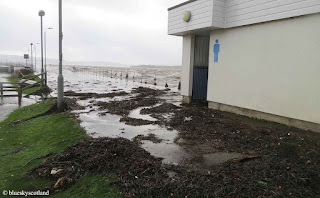 Check out the size of the stones lying on the grass attached to the seaweed in the above photo. Apart from any damage on land many tiny sea creatures must die or loose habitat during these storms. 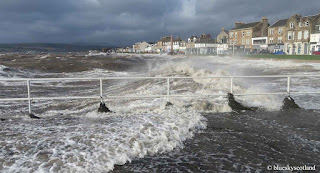 Having checked the tide times earlier I arrived just as the best action was starting, at maximum high tide, around a five metre rise in total with winds increasing. Helensburgh seafront here. 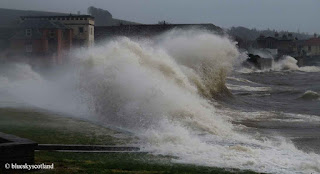 At its worst/finest a magnificent display of power where land meets sea, driven against the coastline by 60 to 80 mile an hour gusts on this occasion. Spray dancing 30 feet in the air and landing 100 feet inland. When it reaches 90 to 100 miles an hour and gets hard to keep still in one place or stand up I have been known to tie myself to railings or lamp posts to take steady photographs. I take my hobby seriously... and enjoy the challenge. 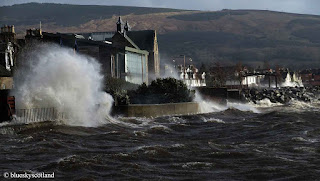 Luckily, I didn't see too many signs of major storm damage here although England, being heavily populated, with houses near rivers and flood plains, experienced the usual winter floods that are more frequent there now. Australia and other hot desert countries burn up in summer while our lands in winter get stronger floods, wilder storms, and longer rainfall. Pity we couldn't pipe it across to each other- swapping some sunshine and heat for fresh water.  Incidentally, there are still many folk around the world who do not believe in climate change but they are probably people who are not Scottish hill-walkers. Being out on the winter Munro's every other week for years we knew something wasn't right with the weather way back in the early 1990s-....30 years ago now...., as the snow on the mountains, started to change then. Unlike the arctic regions winter in Scotland occurs or does not occur within a few degrees... doesn't require 20 below to be winter here. Two degrees can effect it dramatically on the mountains so a natural early warning alarm call. Before the 1990s we had ten years of reliable hard snow and ice cover where we walked with crampons on from December to April. You needed them most weekends. After that period the snows either melted fast or disappeared altogether, same as today, usually a wading job after heavy falls, yet it's only now people are beginning to take it seriously. It's certainly not a new thing but there's now a sudden panic and realization as if it's just been discovered yesterday that we are in trouble. Same with plastic in the oceans- been noticing that on the beaches since the 1970s so there's a mild feeling of  hypocrisy/ where the **** were you? What have you been looking at? Not towards the scientists as they've always been predicting it, or today's children, but towards the general mass of population and governments. They should have been seriously tackling it 30 years ago but whatever happens now it's going to be unpopular as huge change to lifestyles and a brake on rampant consumerism  has to take place. The problem is... practically everything we do at the moment.... is unsustainable :o)
It doesn't take much to be happy...and sustainable.... and you can have a reasonably good standard of life with a lot less... I already do that to a large degree..through natural inclination and poverty.... always a good curb on spending habits....a carbon pinkie print on the planet..... but our entire economy and wealth at the moment depends on everyone buying stuff they do not really need. And if we all stop buying stuff  we don't need.... voluntarily.... other countries will just get ahead in our place. A frantic race to nowhere for all concerned. 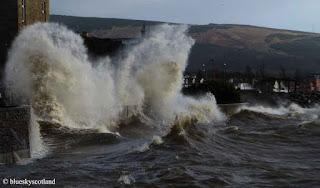 Big seas on the Scottish coast. Troubled times ahead. 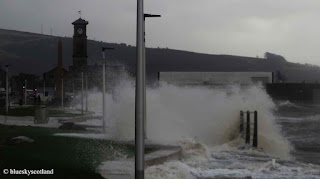 At maximum high tide the main Helensburgh coastal road became flooded slightly with cars having to drive through the spray. 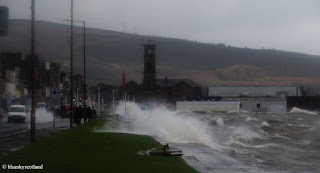 It also got very dark and overcast but luckily it didn't rain. Always a bonus in a storm. 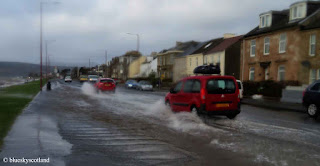 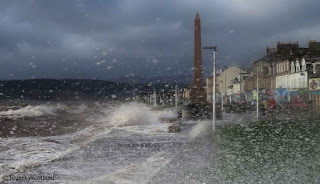 A slight miscalculation on my part saw me taking a photo from inside a wave spray instead of beside one. Which is why I wear full waterproofs. Gave me a good wash anyway. 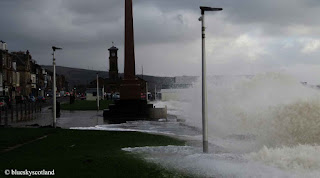 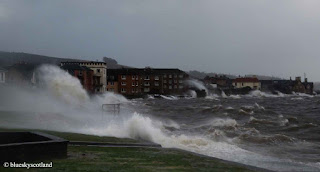 A distance view. At low tide in summer a good walk can be had here along the coast on the sands. 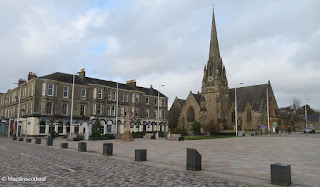 Main pedestrian square in Helensburgh. A nice coastal town to visit in better weather with plenty of local independent shops, arts and crafts, seafront walks, and places of interest. Worth a visit. 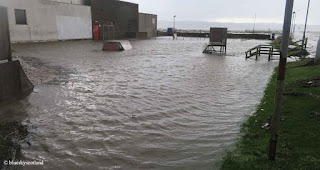 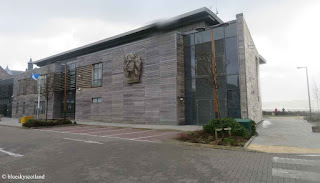 Other than that I could not see much damage to infrastructure so hopefully it was only a cleanup operation with a fresh tourist season approaching in the coming months. Helensburgh and Lomond Civic Centre here, above. 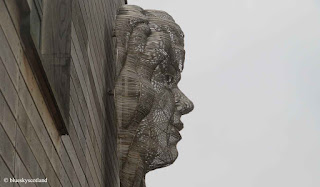 Unusual raised face sticking out from the civic centre building. Enjoyed my date with Ciara.

I am rapidly gaining the impression that you really do enjoy pitting yourself against the elements whether it be on a dark wintery Scottish mountain or dicing with high tides along the Scottish coast.
I do like that lady's profile on the Helensburgh and Lomond Civic Centre building - If ever I see her in the future, I shall think of her as Ciara.

Wow, that looks wild! I’ve a feeling that the woman is meant to be the Spirit of Clutha - I think I read that somewhere, but don’t quote me on it …

They said the winds here would only be 60mph but I swear they were much, much higher overnight on the Sunday - kept me awake all night! I hate high winds - so destructive! And they're coming back tomorrow :-(

Hi Rosemary,
yes, I do like wild conditions compared to listless grey skies and weeks of rain. Makes a nice change.

Hi Anabel, Yep, and fairly controversial, although I personally like the building and the face- also supposed to represent Lady Helen Colquhoun, the wife of the landowner- Helen's-burgh. If sea levels start to rise further though any beach front property may be at risk in the future.

Hi Carol,
it must have been wild on the Irish west coast with waves coming all the way from North America as we are mostly sheltered by Ireland and various islands from the worst effects. As long as they don't do too much damage I like being out in storms.

Wow! We've been lucky enough to have missed the worst effects of Storms Ciara and Dennis - and grateful for that. Spectacular images Bob!

Cheers Ian,
Had a date with Dennis as well. Just back from Ayrshire storms :o)

Wow, those photos are magnificent! I am glad that you tie yourself to railings for safety though, I totally understand. I once hooked my arm around a lamp post in high wind when I was at Beachy Head in England. I had to because I thought I would get blown over if I didn't!