North Berwick to Gullane. Adventures on the Golden Coast. 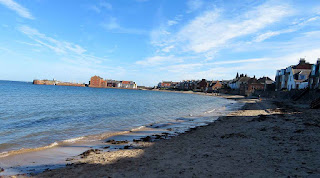 ALL PHOTOS CLICK FULL SCREEN.
Another bus trip out east to avoid the gloom and wet weather of the west coast and the gloom and increasing shambles of Brexit. This was another section of the John Muir Way. Well, my John Muir Way as I'd be following the coastline and beaches whereas the actual route heads inland after North Berwick. I had explored this coastline before but it had been as part of a solo cycling tour decades ago so I hadn't walked the full route to Gullane along the coast. North Berwick and town beach above. High tide during this walk but still ok to complete the route. 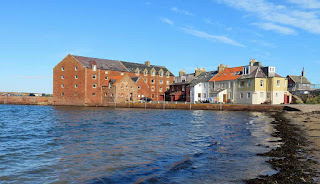 Getting closer. The no 124 from Princes Street to North Berwick is coloured with green and so is the bus stops it arrives at, letting you know that's where to stand to catch it.They also have 124 marked on them. One every hour I think.  Edinburgh local buses are traditionally maroon and cream coloured but East Coast buses are normally green and service a different area, commonly known as the Sunshine Coast. And it was. 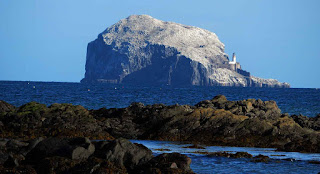 By going into North Berwick itself I was walking in completely the wrong direction to where I was going but I couldn't resist visiting this small coastal town again and seeing this... Bass Rock.  A soaring volcanic monolith  rising from the Firth of Forth and home every spring to one of the largest colonies of northern gannets in the world. Over 100 metres, 350 feet high,  at the summit but made even more impressive with vertical cliffs guarding every part of it except the lighthouse, castle, and landing area. 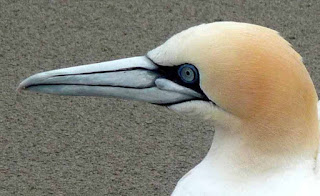 A gannet. A large seabird with a dagger like beak- useful for diving at speed from height into the sea after fish. 150,000 of these elegant streamlined birds live here, nesting in spring and summer on the rock, turning it white, before leaving in the winter months although many stay here all year round depending on what the fishing is like. With expert flying skills Africa, Spain and the Med is a short hop away if a hard Scottish winter sets in. 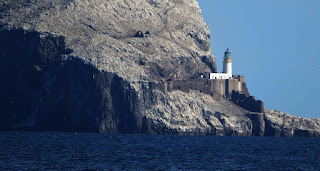 Even on its gentler side it is often impossible to land due to a large east coast swell and landing nowadays is strictly controlled here anyway. When I first visited in the 1980s, if I remember correctly, it was first come first served and it didn't cost very much to visit in an oversized wooden rowing boat with an outboard motor at the rear. Health and safety or bird welfare almost non existent. 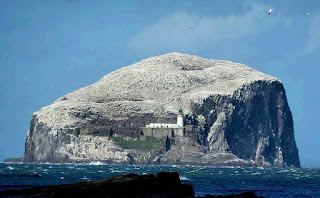 Now, I believe, you have to book months in advance for a place due to popularity and a range of different trips are available. On the one I was on we visited all the other islands as well. 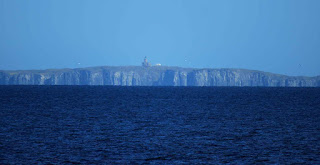 Several other islands dot the Firth of Forth in this vicinity, the furthest out being the Isle of May, seen here, once the base for opportunistic pirate ships lurking unseen in the days of sail, ready to pounce on slower merchants loaded with goods. 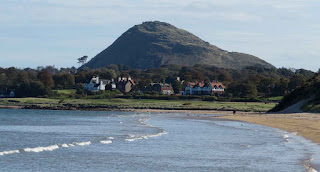 Berwick Law, seen here, is another prominent volcanic plug, which sits directly above the town, in an area which has several more scattered around. 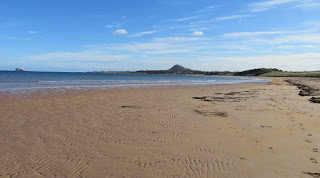 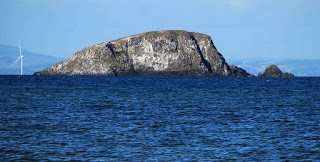 Craigleith, Lamb, and Fidra, which you pass as you walk westwards towards Gullane. Uri Geller owns Lamb, a bird reserve as are the other two islands. 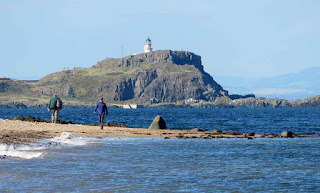 Rocky Fidra, seen here on a zoom, was an early inspiration for writer Robert Louis Stevenson's Treasure Island as he knew this area well as a boy and teenager. It has a dramatic profile from all angles so you can see why it would attract his youthful imagination. It also has a curious doughnut type hole cutting straight through the centre of it. 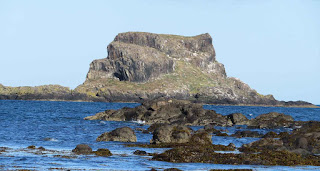 A different view of Fidra from another beach further on. So near yet so far. An uninhabited bird reserve now like all the others I've mentioned. Once you leave North Berwick behind you also leave the crowds and the next stretch was noticeable for its solitude, only a few other walkers making it this far and none near me, just specks in the distance. 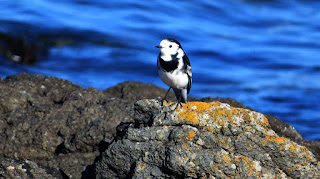 Wildlife took over as my companions. Pied wagtail here looking for lunch crumbs. 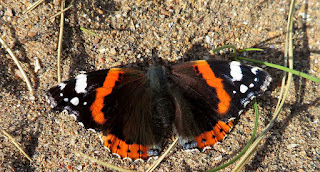 Red Admiral. Seen a few of these over here now- not much else butterfly wise- strange with so many wildflowers around on the east coast. 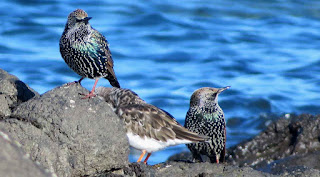 Starlings by the shoreline. 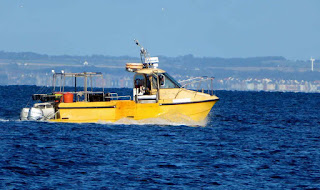 Small boat out to sea, skirting the coastline. 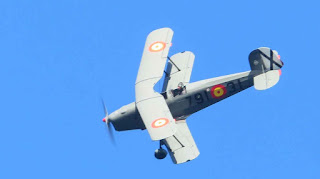 Intrepid pilot up above. 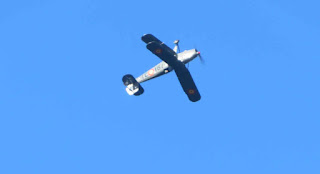 treating me to an ariel display and several loop the loops. Need experience and big balls to go upside down in an open cockpit I'd imagine, even if strapped in. 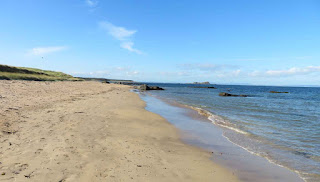 More golden beaches. Fidra in the distance giving an idea of scale and ground covered. Around 4 hours fast walking along the coastline with no real stops plus 2 more hours exploring the town and walks between various buses and my house. 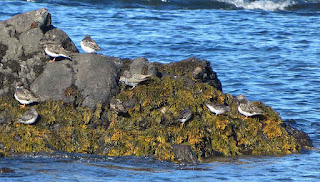 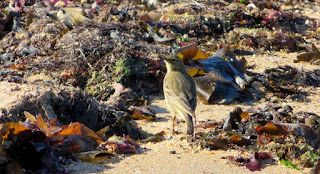 Small hunter in the seaweed looking for bugs. 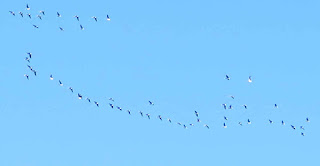 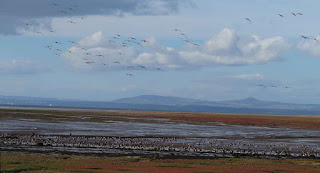 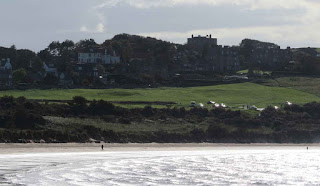 A cracking walk high tide or low but I was glad to see the last beach at Gullane come into view. The first community reached since North Berwick on this surprisingly empty and still remote chunk of headland. It was getting cold and the light was fading by this point so a 124 bus back from Gullane High Street to Edinburgh. Six buses in all. Around 12 km including town walking. 16km total overall from house. 12 hour day round trip. Pitch black start- pitch black finish. The nights are definitely getting longer. Dark by 4:30 pm in the afternoons now.

So this feels very appropriate. A classic by a singer/ songwriter/guitarist who has been around since the 1960s. Co-founder of The Youngbloods. Great evocative violin/fiddle accompaniment here. Grows on you this one does.

I never really fancied being upside down in a plane anyway but certainly with no cockpit lid!

My favourite local walk for us on the east coast... we like going further on to Aberlady. Seen it described a couple of times in TGO magazine this year, getting attention at last.

But we have yet to make it to Bass Rock, tried a few times though!

Lovely photos. I know I must have told you that we have the same butterfly here even in Georgia! Red Admiral, and the name was really supposed to be ADMIRABLE. Now, I hope that is correct, I don't have time just now to look it up! :-)

Great scenery - used to love going to North Berwick when my kids were young.

Hi Carol,
Bad enough in a modern small plane but flying upside down in a vintage model looks harder but may be easier due to the construction of the wings. Always something interesting to see on the east coast beaches, be it windsurfing, horse-riding, micro-lite flying, beach fishing or other sports. More money and time for hobbies I suppose and a great place to retire as it gets great weather for it.

Hi R.C.
Yeah, you could easily add in Aberlady Bay but I wanted to see North Berwick again and I'd visited Aberlady a few weeks earlier with friends. I also fancied getting on the 124 bus before nightfall as this bus timetable changes to every two hours after a certain time at night. Cold waiting for that long in a bus shelter.

Hi Kay,
Yes, you have and corrected my mistake :o)
You might even like the song, a country flavoured number by the co-founder of the Youngbloods.

Cheers The Greenockian,
brought back some pleasant memories for me as well of former times. North Berwick hasn't changed much apart from the sea-life centre opening with CCTV cameras giving close up views on the bird-life and seals out on the islands.

Lovely coastal photos and great close-up shot of the gannet!

What a lovely walk - you have captured the sheen on those Starlings beautifully - couldn't stand flying upside down in a small plane like that, the pilot must have nerves of steel.

Cheers Anabel,
It's definitely one of those small towns with plenty to see in it. Ideal for a day trip or weekend exploring the area.

Thanks Linda.
The gannet had it's eye on me and I had a wary eye on that powerful beak. As close as I fancied going as they are big birds sitting next to them on the beach.

Hi Rosemary,
Yes, it's surprising they look so black from a distance unless they were younger birds as they had just as many white markings on them.

Stunning coastline under a blue sky. Love the various bits photos including Starlings, my favourite bird. Beautiful and funny in equal measure