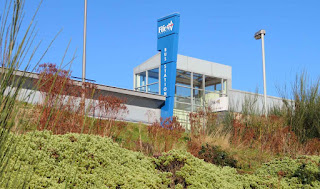 ALL PHOTOS CLICK FULL SCREEN.
A bus trip out to central Fife a while ago but just getting to it now- still over on the sunny east coast but this time centered around an exploration of this fine historic town with long deep roots and an ancient pedigree. Queen Margaret, an English Princess, married Malcolm III  of Scotland then founded a priory here around 1070, enticing some monks from Canterbury to set up a religious complex that attracted nobles, royal visits, and quickly became the preferred burial ground of various kings and the royal court- just one of several lucky spots around the UK to get the seal of approval from royals but a favourite haunt. A bit like Queen Victoria and Prince Albert falling in love with Balmoral. Margaret later became a saint, having devoted her spare time to healing and good causes. A virtue that would  later be repeated in spectacular style by another famous native of this town. An early philanthropist and one of the greatest of the modern age.
Dunfermline bus station above. 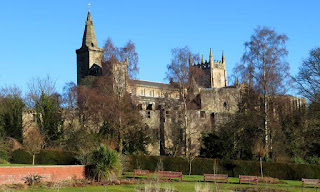 Which explains how this modest community in the middle of Fife, roughly 2 hours drive from Glasgow has so many interesting period buildings within it. Great things came out of this modest place in past times. The Abbey above has Robert- The- Bruce- King written in large letters around the four sides of the parapet tower. 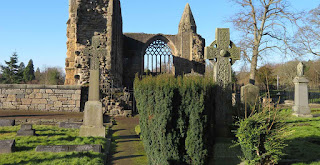 After Margaret, Queen of Scotland, started the priory here her son David 1 expanded it into a large prestigious abbey in the 1100s. Robert the Bruce in the 1300s then restored the central core of buildings here, including the monastery and when he dies is also buried in Dunfermline Abbey Church. Apart from his heart which is placed in a silver casket and is transported by his trusted right hand man for many years, Sir James Douglas, thus fulfilling a pledge death prevented him keeping. To visit Jerusalem and the Holy Lands as his final task. 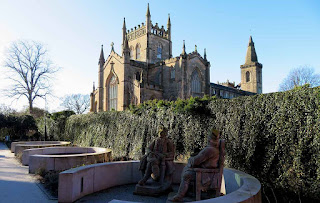 So there is plenty to see here a short walk away from the bus station. This photo was taken in the museum gardens of the Abbey Church. 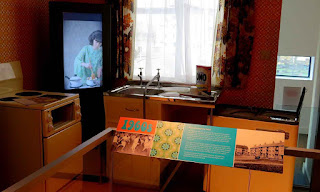 I've been underwhelmed slightly by some local museums in towns I've visited and especially galleries of 'modern art.'    but this one was more to my tastes. A recreation of a 1960s kitchen that took me right back to childhood as ours looked very similar growing up and the tenement estate featured in the photo was a doppelganger as well for my own three tenement high estate growing up in Pollok.
Really enjoyed wandering around this fine museum. Not particularly large, compared to a city one, but great displays throughout. 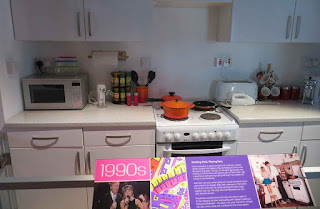 1990s kitchen. I had a wry smile to myself at this one being presented as an ancient artifact to a modern audience as my own kitchen looks very similar, even today. Same units, same spice rack, same toaster, similar micro wave and cooker, same kitchen roll holder. If it ain't broke I don't replace it and modern electrical goods are now designed to break down after a few years use anyway. Old stuff was built to last. And has in my case. 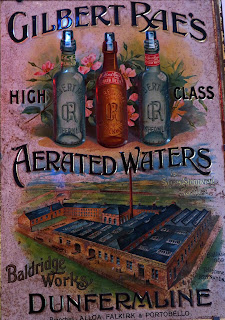 I never realized they had a large factory here but every town and village then in the UK seemed to be  manufacturing something or other before we became a service and financial industry instead, centered around London, with anything valuable privatized or sold off to overseas interests. Loads of interesting stuff in this town museum but I'll keep that surprise for visitors. 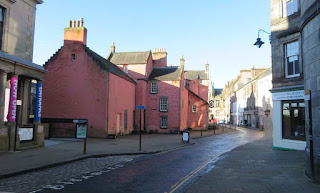 Museum entrance here and old streets off the main shopping one. The 15th century Abbot House in pink. 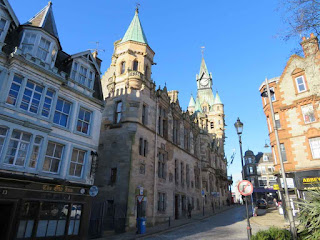 The City Chambers. An impressive structure in its own right. Built in the late 1800s with a Gothic looking spire. 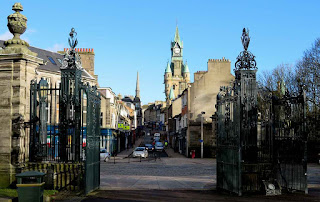 The gates to the great estate of Pittencreiff Public Park, once the private grounds of the Forbes family, a member of which, General John Forbes, fought in various wars around the world, including the 1745 Jacobite Rising, before eventually ending up in North America for the French and Indian War. He forged a path with his army through trackless wilderness in Pennsylvania from Carlisle to Pittsburgh, naming what would later become the steel capital of the USA, and inadvertently kick started the American Independence movement into the bargain. He ordered a string of forts built on a route that would later open up the country and Pittsburgh was named after the British government leader Pitt the Elder. Largely forgotten in the UK now outside Dunfermline various place names in Pennsylvania and Pittsburgh commemorate him, including the trail he blazed across country to capture an enemy French fort, the efforts of which ensured victory but also his death from failing health. He was already ill when he set off and the travel took its toll. Today the Forbes Trail is a well known route and history lesson stretching from Pittsburgh to Philadelphia. Fitting in many ways, as he died shortly after and was buried in Philadelphia in 1759, never returning to see his home again. 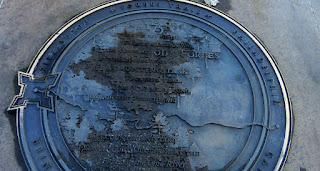 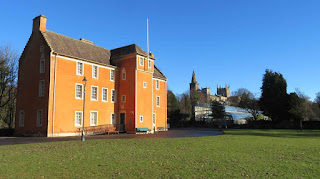 And this is it here  Pittencrieff House. In John Forbes day a grand private estate with shut gates that a young and poor Andrew Carnegie used to stand outside as a boy around the1840s, wishing he could explore it and climb the trees. He grew up in Dunfermline as well but in more deprived surroundings, the son of a struggling weaver in a humble town cottage shared with another family. 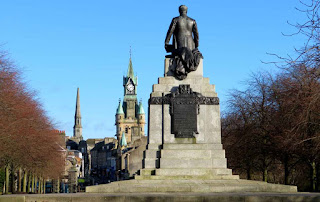 In a weird coincidence though he and his family emigrated to North America where he ended up in Pittsburgh of all places close to 100 years later than General John Forbes, during the industrial revolution sweeping America. There he gradually transformed a somewhat inefficiently scattered fledgling steel industry into a mighty unified colossus, turning himself into one of the world's richest men in the process when he sold up and retired. Sitting on well over $300 billion dollars of a fortune in today's money. Equally remarkably, in the last 20 years of his life he gave most of that vast wealth away, founding colleges, institutions, universities, and libraries all over the English speaking parts of the planet. He did not forget Dunfermline however and returned frequently, nabbing the park and house for the public to enjoy- free for all to visit. And a magnificent park it is. The real attraction for my visit. The shut gates are now open and renamed after his wife Louise. Several buildings in the town bear his name. 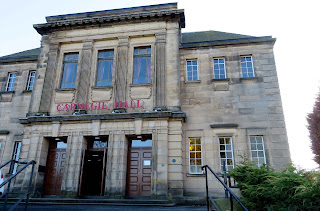 The other Carnegie Hall... In Dunfermline. 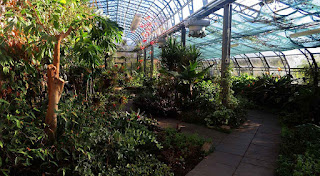 The Winter Gardens. Pittencrieff Park. Not large but beautiful. 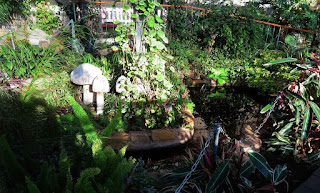 With a small pond and ornamental fish. 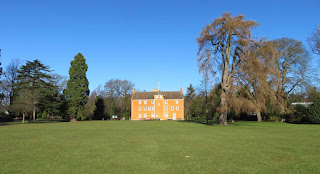 A fine range of mature trees but also open grassy meadows and expansive views as Dunfermline sits on a rising slope with sweeping vistas over a lower part of rural Fife. 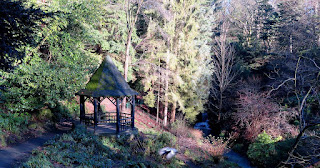 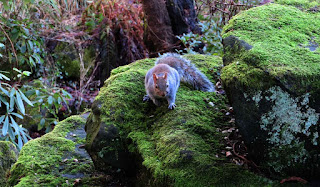 Which complements the more open grass meadows in the upper park above. 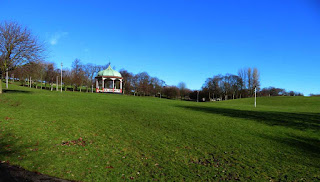 Dunfermline also boasts another park, a couple of km away. This is also old but has more open slopes, a bandstand, and less mature groups of trees. 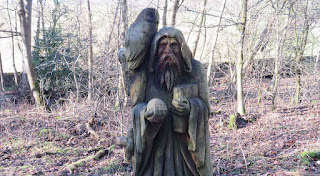 In a small wood nearby is a local sculpture park for children. 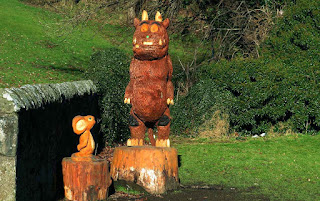 The Gruffalo and friend. Two popular children's book characters in the UK 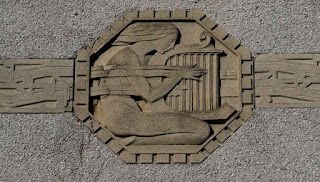 So Dunfermline is full of surprises. Other notable natives born in this town are ballet dancer and actress Moria Shearer, star of The Red Shoes and Dan McCafferty, lead singer of Nazareth... and many, many others besides. A great day out. 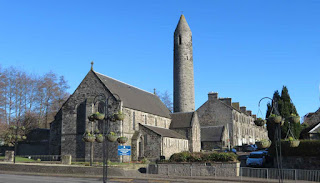 And another highlight.
The French version of The Voice and an exceptional singer from Corsica with a traditional theme and instrument. Worth seeing although I could do without the judges reactions and expressions each time in these programmes and just have the singers on instead.

I have those orange pans! Long time since we’ve been to Dunfermline. I had no idea it was so interesting. I remember visiting the abbey, but that’s about it.

Robert the Bruce...am I remembering that I am one of his descendants? I suppose there must be a lot of us out there! LOL!
That 1990's kitchen, looks nice to me...the stainless steel that is so popular now looks very cold to me.

I love the architecture of that wonderful round tower at St. Leonards Church, which is so reminiscent of the medieval one at Brechin Cathedral in Angus. I have only stayed there briefly when my husband lectured at the Marine Services School in Rosyth, and it looks as if it is a place that would be well worth returning to.

Hi Anabel,
Yes we had some as well. Dunfermline has a lot going for it. The orange mansion house is also a museum, Pittencrieff Park is large and beautifully laid out, including the glen section and the town is worthwhile. Car parking beside P. park or buses from Buchanan Bus Station every hour. I never wait for the last bus back in winter just in case it doesn't turn up.

Hi Kay,
You should like spiders then for inspiration. What I liked about the museum was it had loads of ordinary displays- like sweets and toys from the 1950s and 1960s. Nostalgia for childhood things looking back is always a winner with most people.

Hi Linda,
Doesn't seem like long ago to us but it was 26 years ago and to teenagers back then or now that's a long time in history. My Dad fought in WWII yet when I was growing up at ten or fifteen that period already seemed like ancient history to me. No proper concept of time at that age- just recent events that had some relevance to the present or way back there in a somewhat vague chunk of time and dates when it occurred, along with the Roman Wall. History means a lot more to me now at the end of life :o)

Hi Rosemary,
It's a very unusual tower. Dunfermline is good for a day visit but a fair distance away when you already live in an area bursting with ancient towns, villages and medieval cities. I loved walking around the walls and shops in Chester and exploring Bristol and Oxford years ago.

I'm always interested to see 40s, 50s, 60s and 70s house interiors but am amazed a 1990s kitchen made it into a museum. It looks exactly like I'd expect a 'modern' kitchen to be and is pretty much like mine always are. You're right - if it ain't broke, don't fix it! And modern appliances are cr*p...

You keep introducing me to places I would never give a second thought to! My only sight of Dunfermline is a glimpse from the Motorway as I headed north to the Cairngorms. Its looks a rather interesting place both visually and historically.

Hi Andy,
that's probably because we are at different stages of our outdoor life. You are still going up large hills while I find city, coastline and lesser walks more enjoyable nowadays. Apart from better weather low down big hills are a real effort for me now with diminishing enjoyment plus painful knees coming off them if steep slopes. I can only do an occasional one, every now and then. Luckily, I like the other stuff as well.