Neon Playground. Glasgow at Night. The Art of Darkness. Part One.

The phone call went like this- " Hi Anne, how do you fancy another night-walk? City illuminations and unusual places in the dark."
" Sorry, not a good time for me at the moment coming up to Christmas- too much to do. Where were you thinking of anyway?"
I fancy Glasgow Green. Haven't been there much after dark. Might be good."
" You ARE nuts. Think I'll give it a miss for now."

So I went alone- and still had a great time. 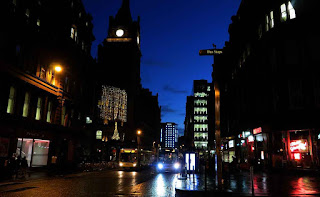 ALL PHOTOS CLICK FULL SCREEN.
First stop was Central Station, seen here, with its massive clock tower. A new hotel had been built on the corner and I'd only seen it from a distance. 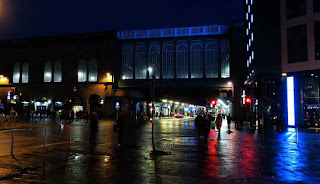 Sandwiched tightly into a fairly narrow gap between Oswald Street and the Central Station Bridge/underpass I was wondering how it would make an impact as it has the larger frontage Radisson Hotel next door and a half dozen others nearby to choose from. 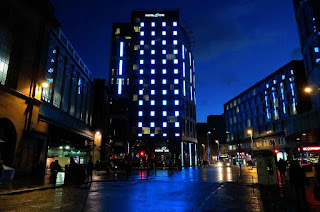 They have obviously thought of that in the design plans however and have used colour to great effect here, turning it into a totally bright blue corner. And as folk who look at my blog regularly will already know or have guessed - I'm a big visual arts fan and bright colour junkie. Addicted to that,,,,, also sweet dripping honey from above, occasional moon howling, capturing the darkest of shadows at night by stealth and handling bright balls of sunshine during the day. Endlessly filling the jars and bottles in my locked cellar with special goodies like the happy little bee I am. 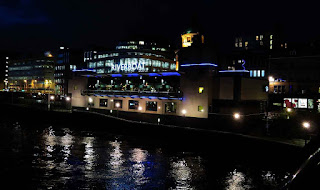 At this time of year when it can be dull, grey, misty and wet for weeks at a time in Scotland I really miss my colour fix and often switch to night time walks instead to top it up. This is where Glasgow can hold its own easily with Edinburgh. The east coast city has castles,volcanic outcrops, ancient streets, and a glorious Dickensian Jack the Ripper foggy feel at night whereas Glasgow is more brash, more modern, and a mini New York in some ways. Straight talking, honest, lively, and in your face. And it also has a large river snaking through its central core. Riverboat Casino here, above, on the River Clyde Waterfront. 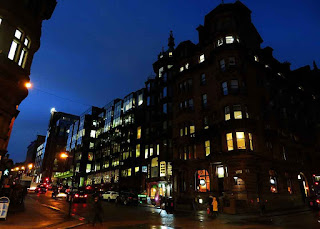 Glasgow's Financial District is close by, seen here, but this time I decided to walk along the River Clyde upstream into Glasgow Green. 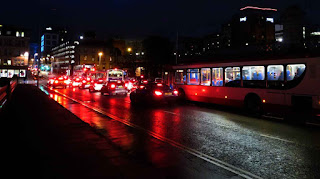 Traffic approaching the Broomielaw, heading into the City Centre. 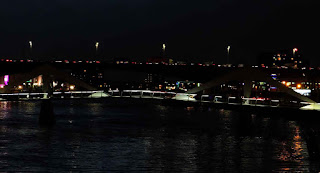 Traffic on the busy Kingston Bridge with the white lit pedestrian bridge in the foreground. 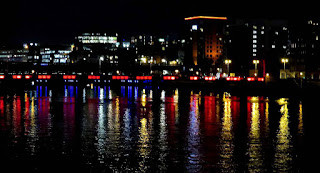 Glasgow at night from the old red pedestrian bridge, leading into the vibrant heart of the city. 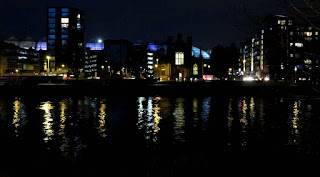 The waterfront view from Carlton Place. By this time I was thinking of some of the vivid art styles I'd seen and liked in various films and graphic games and how to replicate them with just a camera. Things like Nightcrawler, V for Vendetta, Let the Right One In, 71, The Art Deco BS trilogy, Sin City, Moonrise Kingdom, Tron:Legacy, etc etc... 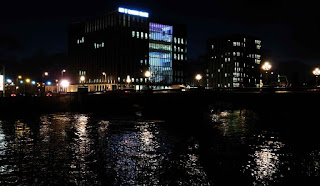 So I started experimenting with different camera settings from pin sharp to blurry, to impressionist mode. 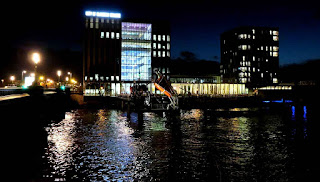 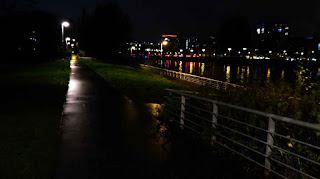 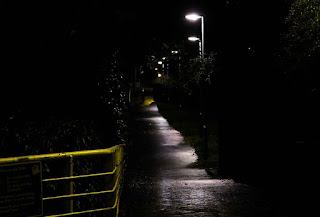 A fellow traveller in the night realm. 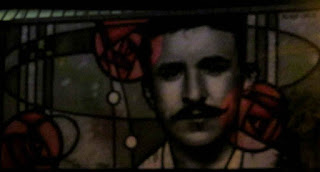 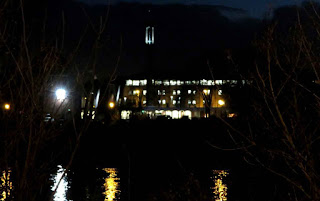 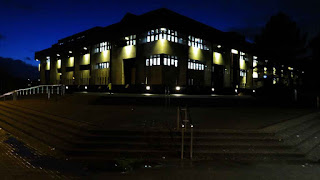 Glasgow Sheriff Court. One of Europe's busiest with a concrete surrounding dry moat 20 foot deep on the inside perimeter to stop the naughty prisoners and anyone else absconding, once inside. 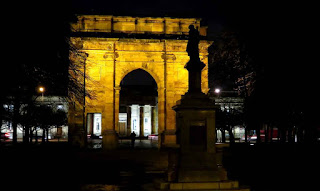 The Great Arch. Entrance to Glasgow Green. A well known city park. I think its fair to say mainly locals frequent it at night so a new place for me to visit. No idea why Anne wanted to miss this out :o) 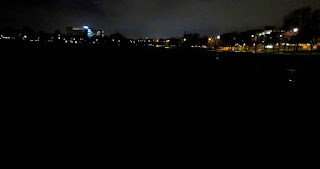 It was busier than I expected and I bumped into loads of people in the dark places walking their dogs, including a large white fighting hound with diamond studded ears that lit up and a huge black Rottweiler which had a red winking bulb attached to its collar as it bounced towards me with fixed intent, looming out of the shadows. Without that it would have been almost invisible. A great invention. Being December I took it as a happy omen and promptly christened it Rudolf. It was almost big enough to be a reindeer anyway. Good to see the recent trend for owning urban wolves is still alive and thriving.The bigger the better. They'll come complete with saddles next. 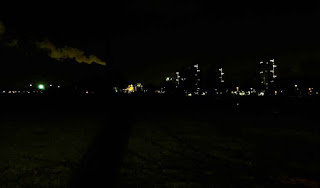 A view of the park. A rare open area of grasslands so close to the heart of Scotland's largest city. 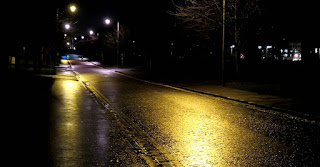 One of the quiet roads dissecting this vast expanse. Empty at night apart from a few visitors going about their own business. I'd deliberately picked a time after heavy rainfall to get wet gleaming streets but it didn't rain once when I was out, preserving my proud record of ten years of outdoor walking in Scotland for the blog without a raindrop falling on me. Yes, you heard that right.:) 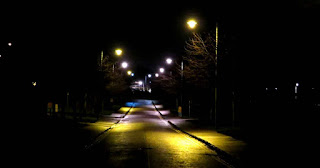 Very Scenic. Very Gothic. I was thinking of Vincent Van G and Don Mclean's Starry, Starry Night when I took this one. 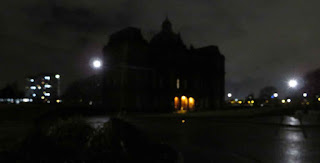 A hazy impressionist one of the People's Palace. 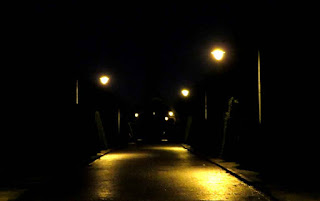 The path leading to Nelson's Column. 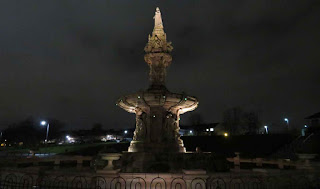 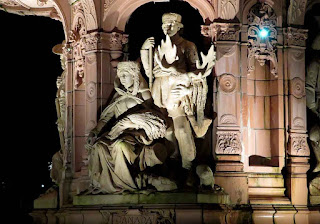 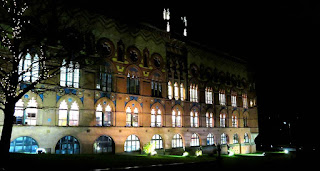 Templeton's up close in December. 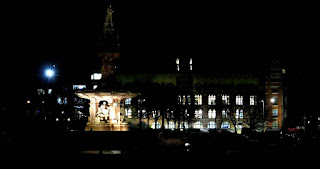 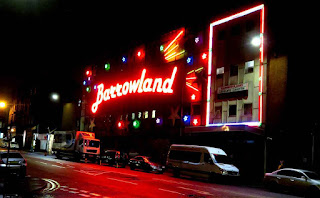 Barrowland Ballroom. Home to many great music acts over the years. To be continued.....

And here's a great, fun, cheery, upbeat, sunny song as a total contrast.
You may have heard part of this catchy modern classic in a recent advert. I like the walk-along, easy going vibe of this. A bit different from the normal.

I used to really admire the architecture of that Templeton's carpet factory - what is it used for now?
Has Anne learnt her lesson from the last time she accompanied you to the neon playground? or perhaps it's true that she was just too busy.
Love the R. Clyde reflections taken from the old red pedestrian bridge.

I really like that 8th photo, from the Red bridge with all the lights reflected in the water. I love that.

Hi Rosemary,
A bit of both I suspect... Busy and not interested... plus she's not yet got around to buying a decent pair of walking boots and it's been really muddy this month, even in the parks.
She's no fun at all though :) I'm trying to be a serious creative visual artist here, pushing the boundaries, and she's always swanning off with family and social life. I have some great original ideas for 'artistic' night photography featuring a willing female that can follow precise orders and suggestions and she simply refuses to oblige at every turn, even avoiding dark alleyways, almost instinctively. What's the point of being an artist's muse if they don't amuse you? Unfortunately, I can't afford the cost of hiring suitable models for my back lane re-imagining of 'Guernica' with neon human figures recreating the famous painting and luminous day glow suspended bananas for falling bombs. So I'm thwarted at every turn. Cant' get the staff.
Templeton's is now a 'lifestyle village' i.e. upmarket flats, offices, and a bar/restaurant complex. Gradually, parts of the East End are slowly becoming trendy despite it's traditional reputation.

Cheers Kay,
That photo seems to be a winner so far. I like blue hotel as its new.

Fantastic night photography! That's something I'd like to try but need lots of practice.

City night walks, I really enjoyed those on my city travels last year especially where you can capture the lights reflected on the water like you have here. Not sure whether I'd be brave enough to do it in Glasgow though! :)

Hi Linda,
Christmas lights are ideal to start with as they provide a lot of light. Best time to take photos is half an hour before true darkness falls when the lights are all on but the sky is still light enough to see everything clearly by eye. With an ordinary auto setting you should get great photos. After darkness falls its a bit harder and either involves time exposure night photography or my much faster way of just point and shoot quickly then work on them later as in dodgy areas its not always wise to linger around flashing a camera. I never, ever, use a flash at night except in caves and tunnels.
Taking them after heavy rain gets gleaming streets and night reflections.
Best of luck.

Hi Andy,
see last comment. If you are fast enough no one knows you are there. Growing up taking photos in a rough council scheme makes me naturally cautious and fast. I took a friend under the Clyde Tunnel once at night, a notorious place before the security gates went on, and couldn't believe it when he brought a large tripod and a £800 quid large camera you couldn't easily hide in a pocket or rucksack. It took great technically perfect photos, each one around 5 static minutes long to produce, but you may as well have hung a sign around our necks saying 'easy money here mugging tourists.' I normally try to avoid that scenario.

Lovely photos - but I think I would probably agree with Anne!

Hi Anabel,
I wouldn't. Women are supposed to be equal to men now... and brave... and be there to protect me :o)
I suspect that's the reason she hasn't got proper walking boots yet as it's a perfect excuse not to go.

All those lights look good in the wet in the dark anyway. I'm lucky - I have the ITV TV mast behind my house with red lights all the way up, the BBC mast as well with less lights and, to the north, Anthorn Radio Station with several red-lit masts and loadsa bright lights at the bottom on the buildings and perimeter fences! ;-)

Hi Carol,
We have two masts here near Armadale on the highest part of the central belt and they are really tall, higher than any skyscrapers. Do you get good reception on your own TV if you have one being so close?