On the Sunday of our Yorkshire trip the weather was much the same as the Saturday. In other words dull, damp and misty all day. If anything it was worse as it had been raining heavily overnight and it was still a light drizzle at lower levels when we looked out but above the 1000 foot mist level it appeared more intense as the skies were much darker up there. No one in the hut seemed particularly keen to rush up into it to bag summits. This view of the dale and Buckden was taken in the afternoon from the balcony trail when it had improved into a half decent day, late on. 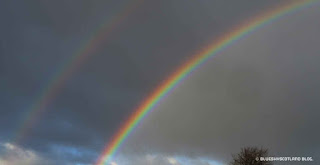 Yesterday, the Saturday, we had climbed the two peaks while Gail had been geocaching on her own with her dog at lower levels but today, due to the weather, she would have human company. I had already picked a lower level balcony trail as a possible wet weather alternative on the map running from Buckden and Wharfdale up to the tiny hamlet of Cray then along the limestone cliff edge to Yockenthwaite through Langstrothdale, returning via the river and part of The Dales Way long distance path through the National Park.. As regular readers will know I have little interest in climbing invisible hills in the rain so had intended doing this route myself anyway- on my own if necessary, if the weather was bad. 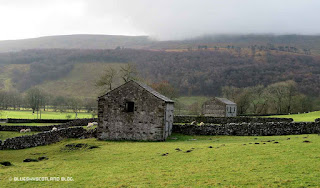 As it turned out joining Gail at lower levels was a popular choice, with John, Craig, Doris and I all keen to avoid the rain as well with a lower level balcony route. This looked scenic on the map and it was in reality, even in cold muddy November. As it was the most obvious low level circular walk in the valley near Buckden this was also the route of Gail's chain of hidden geocaches to find. 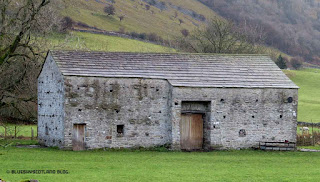 Traditional stone built barns near Hubberholme. The route was well signposted and led us from Buckden, with it's public house hunting themes... 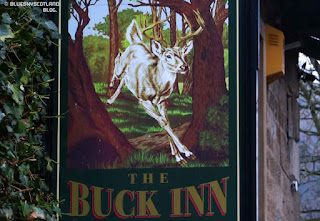 ...to the typical dry stone wall field enclosures popular throughout this area. I'm not sure if it was a lack of trees or because limestone was abundant lying around in chunks in areas that had to be cleared or if it was very easy and cheap to shape and cut, leaving fertile green grass pastures behind but well built dry stone walls and barns are a feature of this entire district. 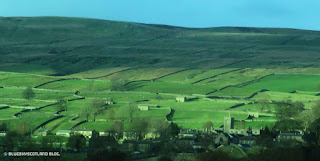 Well seen here in Wensleydale. Being inland and high up they do get severe winters in this area with long lying snow at times. Further north the Scottish west coast mountains, even at 3000 feet tend to be more affected by the warm currents of the Gulf Stream ( North Atlantic Drift)  encouraging moist, slightly above freezing conditions year round, melting snowfalls quickly except above a certain level near the summits or inland so this area is more akin to a lower east coast Cairngorms type climate. Incidentally, this was the only brief glimpse of sunshine we spotted over the entire weekend, and that was on the drive back home. 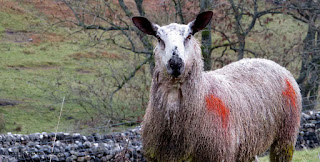 I noticed that the sheep are larger here as well. Massive big beasts... just like the Cumberland Sausages. Maybe the stone walls offer some shelter from driving snow and rain. Looks like moss growing on it here, similar to a South American sloth due to the constant damp weather this autumn and winter. It has been largely grey and dull for several months now. 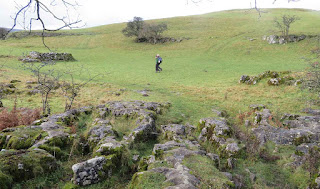 On the balcony trail above Langstrothdale. Limestone pavements near the cliff edge. 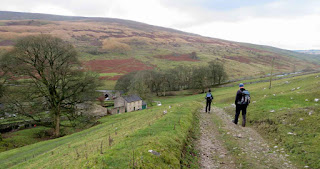 Heading down into the hamlet of Yockenthwaite to reach the river and double back along the Dales Way footpath. I was thinking at first the large stone barns were for storing hay and grain or supplies but then I watched a recent programme about this area where the farmer was using them to shelter the entire flock inside during heavy snowdrifts last year to prevent them getting buried for days under eight foot high snow drifts in all the surrounding fields. A really bad winter last year with the weather coming over from Siberia and Moscow.

A range of different types here....

and they have more meat on their tails than the average supermodel has standing on the scales :) 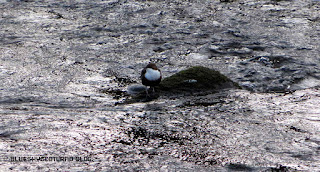 I was surprised at the lack of bird life on the walk, unless they had all disappeared to more sheltered environments, only crows and dippers spotted, even in the patches of woodlands we walked through. 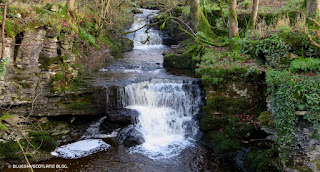 A waterfall near Cray. 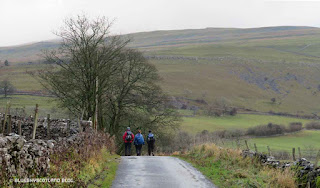 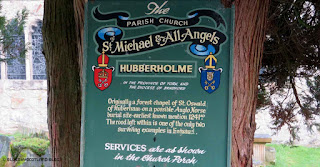 One highlight of the walk was this old church near Hubberholme with an ancient graveyard and a history dating back to Norse times. 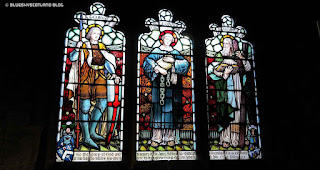 And lovely stained glass windows inside. 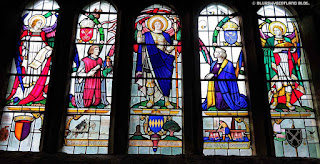 The Yorkshire born author and broadcaster J.B. Priestly is buried here as it was a favourite place of his. 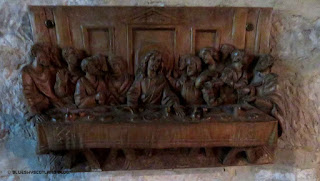 A very small, hand sized, but detailed Last Supper carving that caught my eye on our travels around the district. 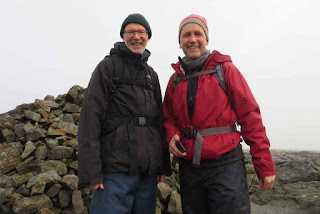 And two guys we met at the Great Whernside summit that wanted a record of it to show they were there on that day. Saturday. Better late than never. I have a two month backlog of posts at the moment. 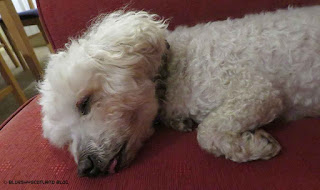 Maybe still not quite at its best - but Yorkshire looking more impressive than last time! Fabulous rainbow.

Hi Anabel,
from my own limited impressions of that area the Dales are halfway between the English Lake District and the Scottish Highlands as far as wet weather alternatives are concerned. The Lakes still have loads going on through the winter months, busy little communities year round and sheltered walks, the Dales are a bit higher, less urban development, and bleaker although Skipton, Bradford and Leeds are not that far away. In the Scottish Highlands and Islands in bad weather the pub or a tearoom, if open, is sometimes the only dry option available.

The balcony paths that run below the summits are excellent with loads of interesting stuff (bridges, caves, small crags, churches, rivers etc). One of the reasons I like Yorkshire, always something of interest on low level walk when weather rules out the tops.

Hi Andy,
Yes, I would like to have explored that entire area in spring or summer conditions to see it at its best as my only visits have been in winter when everything is shut down mostly but we did make the best of the time we did have down there and that underground caving weekend years ago was one of the major highlights of my outdoor life.

your first sheep is a Blue-Faced Leicester, commonly used as tups (rams) up and down the country - not often you see girls but sometimes. Yorkshire sheep are generally mules which are the BFL above crossed with Swalesdales and fairly large. But the native Swaledales are pretty small, as are most native breeds from areas with cold, bleak weather as in up North.

Balcony paths are a good idea - I've done the Buckden to Cray one one night. I told Richard and my parents I'd walk back from the pub at Cray to Buckden just before nightfall. I knew I was really going to go up Buckden Pike and they should have guessed. Consequently, when Richard came out around 2200 (well after dark) as a search party, he and they were furious. "Where have you been?" he demanded (as did they when I reached the pub). I asked him the same question and he (and they) said "Buckden Pike". So they knew where I was all along!

You know your sheep Carol. I noticed most of the fields we passed had a ram in them, or a least one larger animal for around 10 smaller ewes each. Not big flocks though just around a dozen in each field. That black faced one on its own was the most common type.
Aye, that sounds like you. Independent.