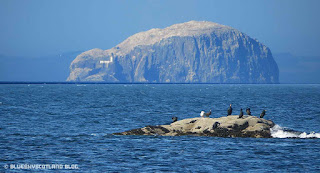 ALL PHOTOS CLICK FULL SCREEN.
A day out in Dunbar on the far east coast of Scotland. Bass Rock above. Bus from Glasgow to Edinburgh then green bus X7 to Dunbar from Princes Street, an express run to Dunbar via Haddington. 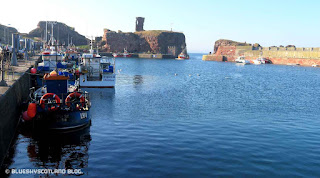 I had visited Dunbar before but it had been many years ago since my last trip there. It hasn't changed much. In sunny conditions, calm or rough seas, it's a spectacular place with a sheltered enclosed harbour, seen here, and a unique cliff top walk with extensive views out to sea. 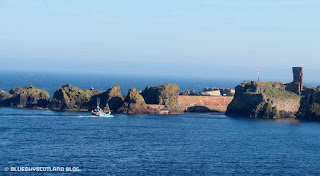 The harbour entrance is not easy to find, especially in rough seas, as it is situated halfway along a line of jagged cliffs and the entire coastline here is a maze of reefs, flat rocks, soaring walls and submerged hazards. Hundreds of ship wrecks have occurred here over the centuries. 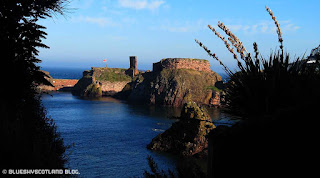 If Heaven exists on earth in Scotland though this is my idea of what it should like. A truly beautiful place.
Dunbar is where John Muir grew up and where he formed his lifelong love of nature The John Muir Way starts here and retraces his childhood early rambles along the coast, up towards Edinburgh before cutting across the central belt to west coast Glasgow and then Helensburgh. The stretch from Edinburgh to Glasgow was not walked by the Muir family as they travelled by train before setting sail for America. The John Muir Way retraces that journey on foot. 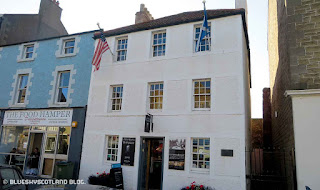 Usually when I arrive here I'm straight down to the sea and exploring- keen not to waste a sunny day indoors but this time I visited John Muir's house and birthplace. You would think the early life of John Muir would be fairly idyllic as he left Scotland for America around 11 years of age... but not so... as I soon discovered inside. 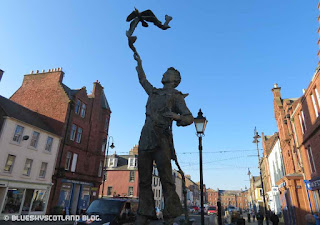 The Muir household was a very strict one. In his own writings later Muir remembers being frequently thrashed for escaping to the coastline and countryside, either alone or with friends. His father was devoutly religious and it was an extreme version of it. Playing was a sin as it was an extravagant useless pursuit in his eyes so the Muir children had a strict regime of school lessons, household chores, then bible studies every night. Anything that deviated away from that was forbidden. The normal boyhood pursuits of running around and exploring the surrounding landscape always resulted in punishment afterwards. Although not a poor family for that era- food was strictly rationed as well and the young Muir often went to bed more famished after his meager meals than before. Any spare money the family had went to the church. By the age of 11 John Muir could remember by heart all of the New testament and most of the old, with the bible shut in front of him. 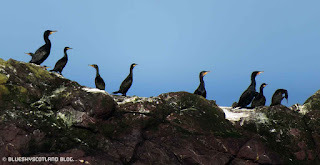 Cormorants. Indeed one of the reasons the Muir family left for America was the father's dissatisfaction with Scottish religion in general as he seemed to find them not to his taste and hankered after a far stricter variety to be found in parts of the new world where you had the freedom to plug into it fully without the extra trappings and traditions of the powerful and well established guidelines of the conventional church holding you back at every turn. 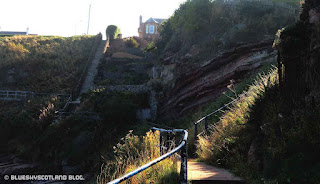 Imagine having all this on your doorstep and not being allowed to visit it and if you did stray on occasion being punished for it afterwards as a wilful act of disobedience. That's probably what rankled with the young John Muir the most as being beaten for doing wrong was the normal approach in those times right up until the mid 1980s, not worth talking about later. Most youngsters just accepted it as a part of daily life, if justified. Teaching right from wrong, except if excessive and unnecessary force was used unduly. What his father considered a major sin however was never one in his son's mind no matter how many thrashings he got for it. Always hungry, no doubt there would also be good pickings to be had here like ripe berries, certain flowers, stray crops in the fields, fish, and fresh eggs. He also had a bright inquiring mind, inventing labour saving devices from a young age and noting the different layers of rock around the coastline- already wondering how they were formed. 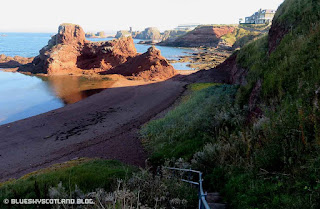 In America the family carved a new home for themselves in the wilderness and an older John Muir would walk 1000 miles across it, observing and trying to understand how different landscapes occurred but he never forgot his wanderings around Dunbar, made even sweeter by being forbidden encounters. He never lost his faith in God either- just transferred that faith from books and paper learned by heart and hard punishment to everything he could see around him occurring in the natural world. In a way, nature became his own, self discovered, religion, and he devoted his later life to it.

Curlew on the shoreline. 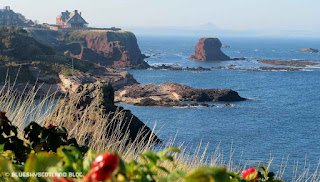 And no wonder with all this on his doorstep five minutes away. The cliff top esplanade walk along the coast running west and north towards Belhaven Bay. Easy and safe it's a great winding flat ribbon to follow as magical as any yellow pathway in the lands of OZ. 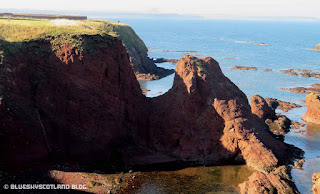 Rock formations viewed from the walkway ten minutes easy stroll from Dunbar Harbour. This is looking down on a low level traverse under the cliffs I would attempt later. 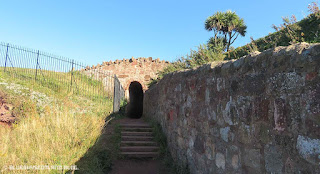 Part of the winding coastal path running above the cliffs. 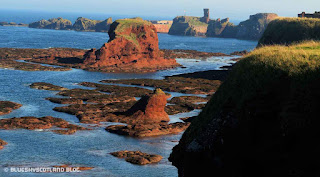 Old Red Sandstone. Looking back towards the harbour and its hidden entrance. Also part of my traverse line. 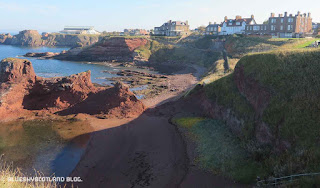 A set of steps leading down to the beaches. Dunbar in the distance. 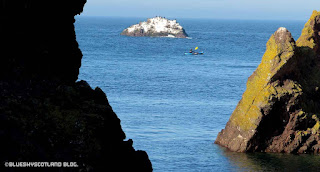 A lone kayaker exploring the coast. Big swells here and submerged reefs so not an easy paddling option except in perfect weather conditions. An area usually left for experienced kayakers if paddling alone.

And leaving the clifftops behind you come eventually, tiptoeing around past the golf course, to Belhaven Bay. A fantastic wild and windswept beach. One of my favourites in Scotland. Part of the John Muir Country Park. There is a separate car park and toilets here. A tourist car park can also be found beside the cliff top swimming pool above the harbour entrance in Dunbar. 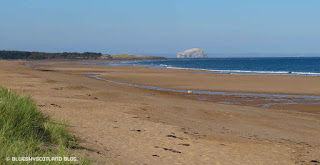 Belhaven Bay and Bass Rock. You can walk along this beach to the far end and the mouth of the River Tyne A spectacular outing. No bridge exists to cross it but a circular route slightly inland leads to several different paths as a return.

This is one. The back lands salt marshes which sometimes flood to create a barrier between the beach and the countryside inland but easy to get around by other paths. 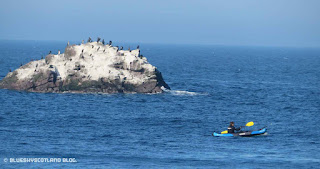 On the return leg I opted for a low tide traverse under the cliff walkway as I had not done that before. 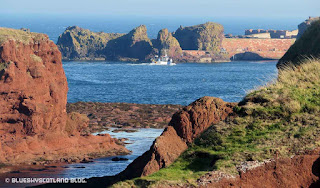 It turned out to be more adventurous than I had bargained for as the tide did not go far enough out in a few places, leaving a thigh deep wade  at two points. A committing traverse under the cliffs as you would be completely stuffed and stranded if the tide turned quickly. For that reason I would not recommend it as an option as escape routes are conspicuous by their absence.

I did not want the embarrassment of a drone and lifeboat rescue so I turned back when it became obvious it was too committing around one last corner with a deep water wade and an unseen traverse still ahead under high cliffs before possible safety and escape routes beckoned. Being a coward can save your life at times. Also called common sense. 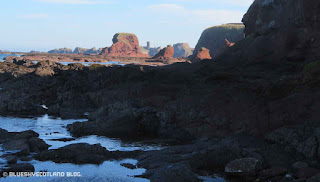 An easy part of the low tide traverse under the cliffs. 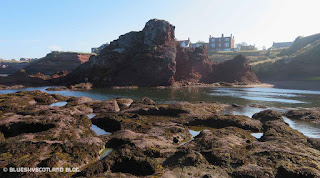 A deep water wade section. Too cold to strip off and swim it so back we go to the upper path. 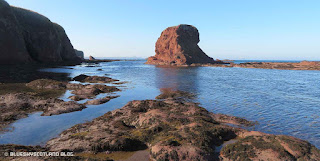 On the traverse under the cliffs. 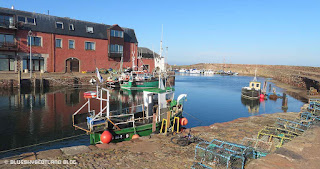 And another part of Dunbar Harbour to end the day. A great trip and destination.

What a gorgeous day you had for it! I’ve only once been to Dunbar and visited the John Muir birthplace, but had for gotten the details of his early life.

That's exactly how it'll be for all of us if they let 'sharia law' come in - no playing, no music etc, etc...

Looks a truly great coastline for exploring there - would be very frustrating to live there and not be supposed to enjoy it. You'd think his father would be glad he was wanting to make the most of "God's creation"!

Why is that seabird rock completely white? Can't all be bird muck surely?

Hi Anabel,
yes, always at its best on a good day. You would enjoy the clifftop walk and the Belhaven Beach walk, either as one walk or two separate walks if a car is handy. Great scenery throughout as well as the shops and harbour area.

Hi Carol,
No playing, no music.... sounds like some pop acts I can think of recently.
It is white because of bird poo. Bass Rock looks good but it stinks up close- a fact that has saved many old time sailors as you can still smell it in the mist or fog before the days of navigation aids. World's largest colony of northern gannets.

Oh what a beautiful place! I can see why John Muir would want to sneak away and explore!

Dunbar looks like my kind of place for a coastal exploration day. Had no idea it held so much interest. Another place I’ve driven past many times and never given a second look.

Thanks Linda,
That coastline has many great features but Dunbar is a real highlight. A fitting start or end to a very varied coast to coast long distance walk.

Cheers Andy.
It's worth a visit. Loads of other great walks and sandy beaches,some rarely frequented, in that area as well. Similar to Northumbria's coastline in many ways, just further north.

The sunshine coast indeed Bob, great place and you've documented it really well here - thanks for the reminder of how good that stretch of coast is!