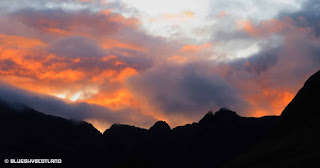 ALL PHOTOS CLICK FULL SCREEN.
Our last morning on Skye, the Sunday, dawned bright and clear, and we could finally  see the Black Cuillin ridge free of rain and clag. 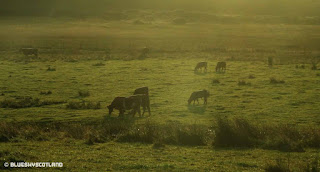 With a good weather forecast a big day was planned- a horseshoe round of Beinn na Caillich, 732 metres, Beinn Dearg Mhor, 709 metres, and Beinn Dearg Bheag so we motored around to Broadford and parked in Strath Suardal near the chambered cairn.  A faint path from here leads up the deep heather slopes towards the mountain.

It had been raining most of the night and for a few days previously so the ground underfoot was saturated and slippy, as shown here. In places... half path/half stream bed as draining water always takes the easiest, quickest line off the slopes.

Anyone who thinks the Red Cuillin are going to be much easier game than the jaggy Black Cuillin may be in for a shock. Although this slope and ridge line ascent looks gentle stuff- in reality it was desperate. For a start the Black Cuillin peaks sport good paths, being extremely popular, whereas our path soon disappeared a quarter of the way in, leaving a tangle of boulders, deep holes, thick heather and loose scree to negotiate. 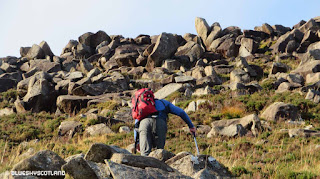 It soon became a battle up a giant Jenga set of massive boulders, some of them rocking and loose when you stepped on them, requiring constant vigilance and awareness. Progress was slow and we were soon knackered. 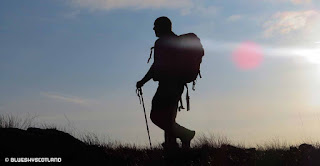 Alex in silhouette against the morning sun. 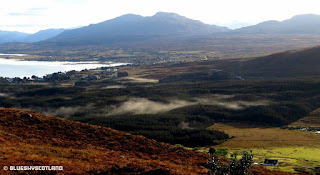 Mist burning off the damp forests below and a view of the small Skye town of Broadford. 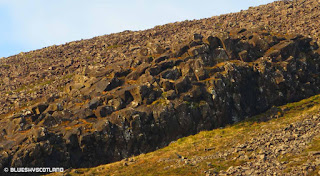 If this basalt dyke was on the summit  it would form a distinctive tor but it was situated lower down the hillside so just one more obstacle to negotiate around as it proved too steep and wet to climb over. 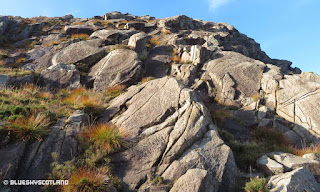 This section had to be climbed however and proved harder than it looks here as the grass was sodden and unreliable as footholds, unless you got your boots deep into a firm flat placement. Part of the problem may have been our advancing years however and diminishing energy as a twenty something local girl passed us on the ridge line shortly after with her farm collie dog in tow and made cheerful short work of any slope or scramble encountered. She did look like an experienced  fell runner though, running up slopes and charging down the scree as if her house was on fire in the valley below, soon disappearing into the distance. Oh, to be young again with that largely taken for granted level of energy and commitment. Elastic legs and thin bodies no more alas for us. 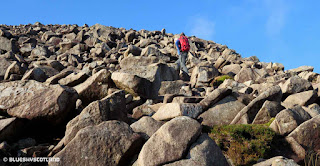 Another round on the great Jenga game of boulders followed before we finally gained the upper slopes and easier ground. 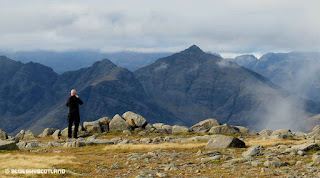 All our efforts proved worthwhile however when we eventually reached the summit of Beinn Na Caillich, 732 metres or 2,401 feet, and were rewarded with world class clear views over all the other mountain ranges in the vicinity. John taking in the view here. 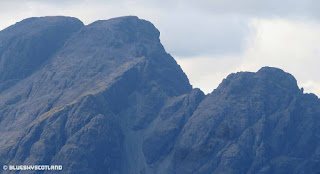 A close up view of the Bla Bheinn traverse, 'The great blue mountain' and one of the finest scrambling outings in the UK, negotiating numerous pinnacles, sheer drops, plunging exposure, and thankfully grippy rock. Not a place to suddenly learn you have no head for heights however as downward escape from the ridge, once committed to the traverse, is problematic. This long demanding traverse, Tower Ridge on Ben Nevis, and Italy's Monte Pelmo rank highly as my finest moments in non roped scrambling- any harder and I would have been wetting my nappy and crying for my mammy... and a rope. Real mountains have that effect on people.

Due to the severity of the jagged ridge lines here and the often serious, unforgiving nature of the terrain many accidents and several deaths occur each year on these peaks, keeping the mountain rescue teams busy. Helicopter here over the Black Cuillin, either on a training run or an actual call out to a casualty. If you fall off these peaks you will be very lucky to survive it, with ridge lines in places no wider than both arms outstretched and long vertical drops either side. 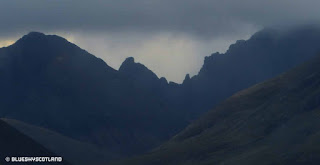 Another section of the Bla Bheinn traverse ridge line. 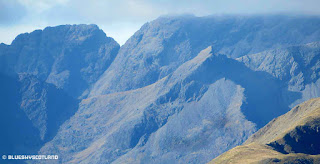 Nowadays, in our late 50s and mid 60s, we three mature hill walkers were just content to take it all in from the relatively easier ground of the Red Cuillin peaks. Where once any knifed edge ridges were immediately pounced on eagerly as a challenge to virile manhood- now they seem too much of an effort most of the time if we have climbed them already in our springy prime. But still superb to look at. 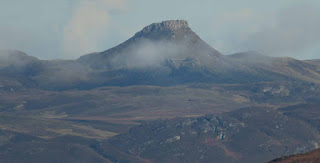 Looking across at the isolated small peak on the separate island of Raasay, Dun Caan, 443 metres high, and a longer walk in than expected when we scaled it years ago. A little cracker though, and like any remote island high point- a treasured gem to look back on. 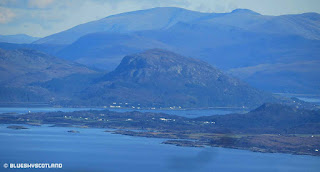 A view of Plockton- (so I'm told by Alex who knows these things. Mr Memory Map for distant summit views) 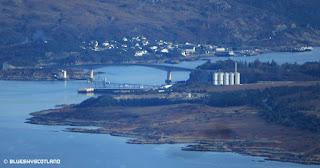 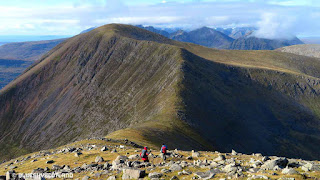 The continuation ridge walk around Beinn na Caillich, Beinn Dearg Mhor, and Beinn Dearg Bheag, a natural horseshoe round of three summits and thankfully much easier walking up here. This is the enjoyable bit of the day and steep and narrow enough to be interesting but never threatening, exposure wise. 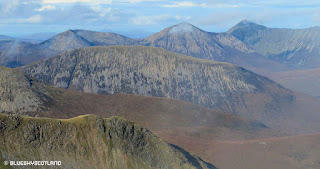 A Red Cuillin panorama- still several fine peaks left to bag here in this deceptively easy looking hill range. If they are anything like Glamaig or Beinn na Caillich however, we will have steeply inclined loose scree slopes and plenty of pathless boulder problems to look forward to solving here as well. 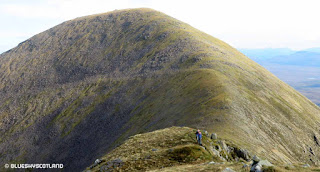 Looking back towards Beinn na Caillich summit from the ridge.

The start of a steep scree descent after the trio of peaks. 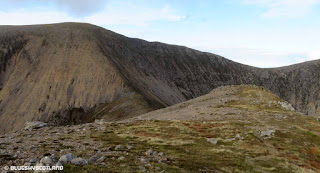 This one here, above, seen on the way down.

Looking over to the rugged Trotternish Escarpment, successive rising folds and cliffs here revealed to be ancient lava flows and then subsidence, cracking, and erosion to leave large detached flakes and pinnacles around the world famous Storr and Quiraing- memorably featured in the Sci Fi film Prometheus, among several other candidates, using this otherworldly landscape to good effect. 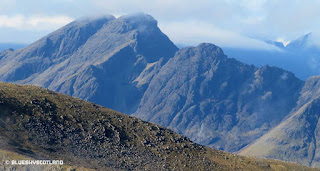 A more complete view of Bla Bheinn, 'the great blue mountain,' and large and complex enough to be a single hill range of different switchback summits in its own right, detached and isolated across the bare sided glen/valley- regal, supreme and haughtily majestic- situated on its own merits, away from the rest of the Black Cuillin ridge. 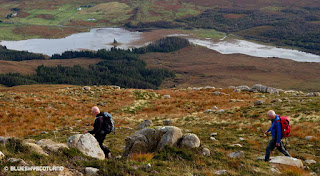 The descent was almost as taxing as the way up- again largely pathless underfoot, and each of us slipped over at some point due to the waterlogged uneven ground and deep vegetation hiding holes and swampy tussocks but at last we reached the car and salvation. A great day- a cracking trip and smashing company.
Next week- the equally excellent, rugged, but nearer to home- Barrhead Alps. Another great blog post to look forward to...

Did you say couch tattie? I don’t think so!

Blimey - in my book, you'd have to be nuts to do Tower Ridge unroped! I wouldn't!

So, would it be an easier approach to Beinn na Caillich from the other 2 mountains and return the same way (looseness-wise - I hate steep and loose!)? The bits in between look fine but I've always been put off by the steepness and looseness of the lower bits. I think I was looking from around Loch Slapin or somewhere when I was wondering about a route...

I was a couch tattie after that workout- happy to munch crisps and a big trifle and watch TV when I got back- seized up until I recovered.

Hi Carol,
You could go up our descent route, which is slightly easier but longer- however that is the side the main loose scree ascent/ descent is on. Either boulder route or scree- take your pick as most of the Red Cuillin have that combination. Marsco is the only one with a reliable well defined path and shapely ridge all the way to the top, being a popular walk for decades.

I prefer my mountains to stand still when I'm climbing them!

I've done Beinns Dearg Mhor and Mheadhonaich from Sligachan and they were nice hills with good paths and no looseness to speak of - I chickened out of Glamaig from there though - I'll probably have to do that up the steep grassy side from Sconser.

For Marsco, I'm assuming you don't go up the side you can see from Sligachan but the other end?

How fortunate the three of you were to see the Black Cuillin ridge free of rain along with that wonderful sky - the photo really tells you the story of just how it got it's name.
Negotiating that giant Jenga set of massive boulders was quite a feat - the three of you are obviously still fleet of foot.
Skye is a lovely island, but I have only been there during early summer - the only problem at that time of year are those wretched midges.