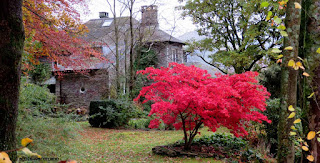 ALL PHOTOS CLICK FULL SCREEN
A club trip to the English Lake District at the start of November and nicely timed to catch the best of the autumnal tree colours at their peak. As I've learned over the years anytime you see a bright burst of vivid red in the deciduous landscape in autumn it is usually a maple of some sort- in this case a Japanese maple. 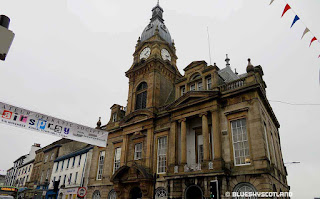 Not too sure why we ended up in Kendal on the Friday afternoon as we were actually heading for Glenridding to a favourite hut but we either missed the turnoff, it had major roadworks on the Penrith to Ullswater road info somewhere,...or driver Alex just fancied a different route. Kendal Town Hall here, above. A nice old building.

A close up detail of the town hall entrance, erected in 1827 apparently before being used as a town hall so maybe this later date in stone refers to something else, like the elaborate archway, as it doesn't seem to match the conversion date either from district assembly rooms to town hall. 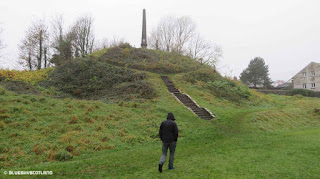 We parked up in a car-park in the town centre then had a wander round. I fancied seeing the castle on the hill but we picked the wrong one. Kendal Castle sits on a similar small hill on the opposite side of town and is a ruin, but still an obvious structure whereas this, Castle Howe on Bowling Fell, is just a heap of rubble topped with a monument to The Glorious Revolution when the Catholic King James II lost the throne and the land to his Daughter Mary and William of Orange. Turns out this is Kendal's first castle though and is very ancient, built around the 11th century, long before Kendal Castle. It is surrounded on one side by Beast Banks, now a modern road but maybe named after part of the original fortifications surrounding the castle. 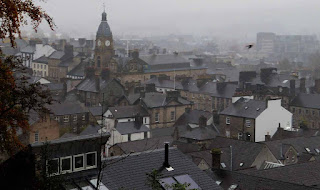 It was a very murky wet afternoon and my companion's  heart was not in this walk at all. I on the other hand was determined, now we were here, to have a wander around and see the place fully so we split up after this point. He to visit the numerous charity shops along the main street for bargains- me to explore. We would meet back at the car in one hour. That suited us both. 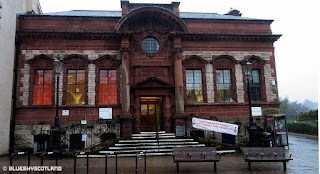 Carnegie Library. Kendal. I've written about Andrew Carnegie before in a post about Dunfermline- a unique philanthropist who gave most of his immense fortune away in later life, founding education and learning institutions worldwide. The English speaking countries anyway. He believed that access to books and education could open up a doorway of opportunity for anyone willing to undergo that journey as he himself was born poor in Scotland, in a similar sized town to Kendal. 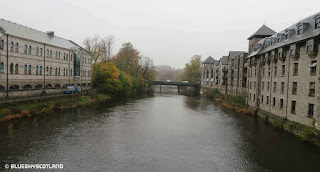 From there, after looking at a town map info board,  I made my way down to the river to do an obvious circular walk of this small Lake District town. Unlike other small towns within the Lakeland 'golden bubble' Ambleside, Cockermouth, Penrith, or Keswick say,  Kendal feels slightly more industrial as it has several large mills, seen here, now converted into apartments and small businesses. Bridge Mills business centre being listed nearby on a notice board. Originally wool products, carpet making, snuff tobacco and textiles in the various large buildings seen in town but it does have pretty areas as well and attractive buildings but more of a mishmash than the other 'Golden Bubble' towns seen down here. 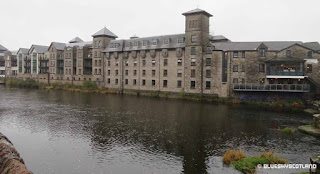 In many ways, with these high mill buildings, it reminds me of Barrhead, Paisley and Neilson, mentioned in the last post, also major textile hubs with a legacy of manufacturing. In another coincidence  I've been in Kendal once before. I was around 14 at the time and came here on a Barrhead bus run with my parents. Being a typical teenager, embarrassed and awkward, I sat well away from them at the back of the bus, pretending to be on my own, and met up with a family from Hamilton, another bus pick up point, like ours, on the journey down. They had two children and I got on really well with them. I remember that. I also remember exploring Windermere with them and being completely entranced. No recollection of what Kendal was like though. That passed in a dream. 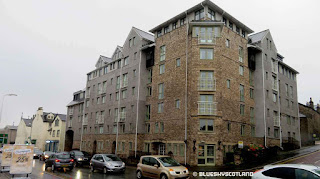 New apartments in Kendal which look like the architects have replicated the mill look here. A common trick with architecture in towns where they often mirror existing prominent structures. 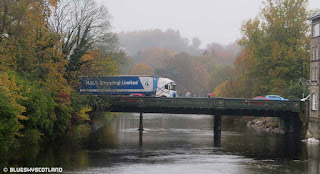 One of several bridges over the River Kent (Kent Dale) from which the town derives its name. Like many other parts of England this sizable river is prone to flooding so it's a double edged sword- scenic beauty and useful past industrial development which allowed towns like Kendal to prosper versus a serious threat of flooding and damage to property. 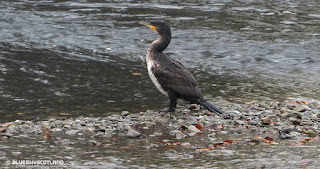 A fish eater on the river faces the same predicament. Shags and cormorants do not have very waterproof feathers so have to dry them off frequently between dives- yet this may be an aid to fast underwater fishing as a lack of trapped air in the feathers means less buoyancy overall and less energy used to stay under. 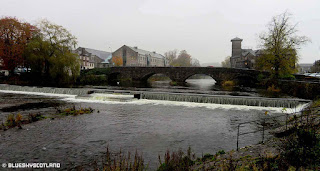 One of the weir across the River Kent. A nice walk this, even on a wet day. 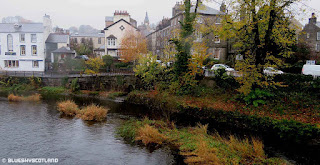 Further down the river I cut over another bridge and used a quiet lane/yard to get back up towards the main shopping street. 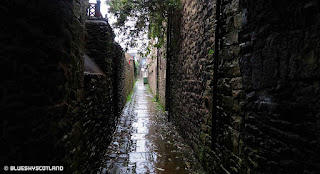 I puzzled over the nature of these sturdy, narrow back passageways called 'yards' until I found a town info board explaining them. Turns out these fortified back lanes, running arrow straight off the main street in their dozens originated as a defensive measure against raiding parties, both Scots and English, during the border conflicts, 14th to the 17th century, which would suggest Kendal is one of the older Lakeland towns. They are not yards in the more conventional sense as in a square or rectangular clearing- more narrow deep corridors between buildings to kettle in unwanted intruders, maybe setting them up for an ambush as you could fire straight down them at anyone caught inside. No doorways or alcoves to hide in here. 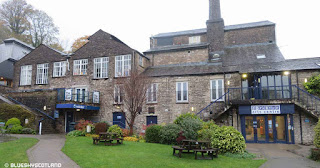 I then stumbled by luck on the Brewery Arts Centre which was a little green oasis off the main, very busy, shopping street. I was delighted to find this as I could easily have missed it. 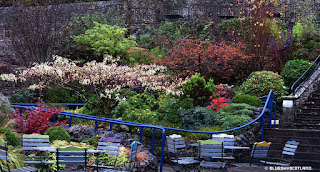 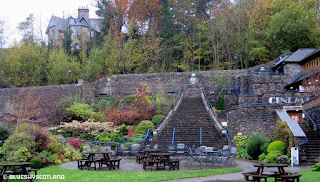 And a stair leading up to a well placed sculpture.... 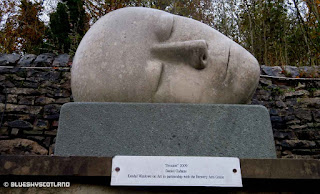 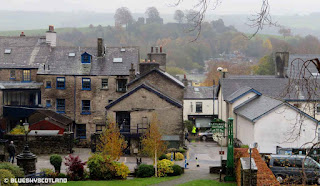 A view over to the ruins of Kendal Castle from the Arts Centre. 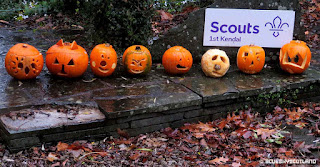 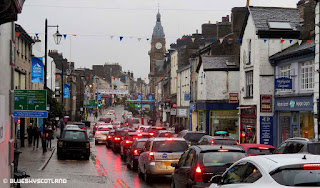 The main shopping street in Kendal at rush hour. The only drawback of our visit to Kendal was the volume of traffic between Kendal and Windermere which was heavy and relentless  5 mile per hour nose to tail movement. When people say the Lake District is too busy they probably mean this section from Kendal to Windermere as the traffic was fine everywhere else. Kendal is not as picture postcard pretty as other Lakeland towns but it does have a fascinating history. This level of rush hour traffic along the main shopping streets every week day however might put some tourists off but you can escape it easily enough down by the riverside or on the castle walks.
To be continued... and the best is yet to come.

Ha ha! I'm reading this in our favourite hotel in Kendal right now! ;-) While you were up at Beastbanks, didn't you see Postman Pat's post office? It's just along from the Riflemans Arms pub on the triangle...

Hi Carol,
Come to think of it that rings a bell. P.P.O that is. Think we did pass it. Just remembered that name 'Beast Bank' and that A.W. came from there as well as Kendal Mint Cake(too strong and one flavoured for me though- only bought it a couple of times early on.)Good for Arctic expeditions but I prefer Mars Bars and the like for energy.
Those yards are interesting though as I do not recall seeing them (arrow straight and high) in any other Lakeland town.- Nearby Ambleside looks and feels very different, yet is closer to the Scottish border as is Keswick and Cockermouth- unless they grew later, in Victorian times.

PS. You should have a look at the Street Art Utopia Link on the right hand side of blog. It is exceptional.

Guess what, I was going to mention Andrew Carnegie in a blog post! I saw a film recently and there was a Mr. Carnegie, only they pronounced it Car- NAY-gee not Car-nuh-gee. I looked it up, realize that he said it the British way, which of course he would being from Scotland. Looks like the problem for Americans is New Yorker have Carnegie Hall and that influences all the U S A, I suppose! What a fascinating man! He was friends with Mark Twain, don't I wish I could have listened to their talks together? Also, the Lake District....reminds me of Beatrix Potter, someone else I truly admire!

I love the Lake District, though I don’t know Kendal all that well. We were in Dundee at the weekend and almost detoured to Dunfermline on the way home to visit the Carnegie birthplace, but it was such a miserable day on Sunday we just headed straight for Glasgow in the end.