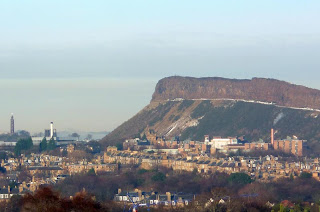 Phoned up Alex.He`s still on night shift at work but had the day off and had said he might be up for going out if he felt OK.Not surprised to find he was knackered and had a cold.Having seen the forecast and set my sights on a snowy Arthur`s Seat I was not too disappointed at this as I did not want to miss my window of opportunity for another year and knew he wouldn`t go.His attitude is typical of most people in the climbing clubs however that dismiss hills under a 1000 feet especially if its in the middle of a city.That misses the point as this hill is certainly worth every inch of its height and is up there with the classic mountains of Scotland for views and exposure.
Knowing Alex he`d probably talk me into walking miles up a deep snowy featureless doorknob to bag his 100th trig. I do miss his input for interesting hills as we complement each other being into different aspects of the outdoors but on this occasion I was happy. No wind,blue skies,Loads of wee matchstick models unknowingly running around for photos. 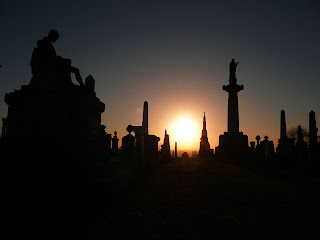 However I`m getting ahead of myself as first I cut off the M8 to go up the Glasgow Necropolis when I noticed an inversion burning off GlasgowGgreen and the Gorbals area.A stroll through the tombs and crypts led me to the top just in time to catch the mist boiling off the high flats. 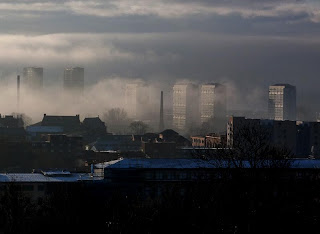 Worth the detour up this ancient graveyard just to watch this for 30 minutes along with a group of Japanese tourists.
Because of this delay I arrived in Edinburgh around twelve noon but that was plenty of time.Parked at Duddingson car park beside a frozen loch (poor wee birds) and marched up the hill.I was soon on the ridge line with fantastic views opening up over the city.
Don't laugh but I put my crampons on at this point and kept them on my feet for the next four hours back to the car. It was really icy up here, thousands of eager feet turning every path into a burnished mirror of glass.How more people aren't hurt or killed up here in winter conditions is a mystery to me.Its harder than most Munro's as you would not get this level of ice anywhere else bar a waterfall.A large percentage of the folk going up were tourists with street shoes,happily struggling upwards to the slippery summit with nothing to stop them if they went over. At least I had a trekking pole. 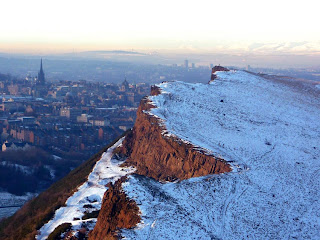 Came off the summit down the steep zig zags which were not far off a grade one ice climb still seeing folk clinging to every frozen grass handhold as they made their way up. Amazing stuff. 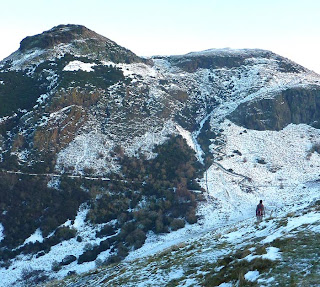 Having descended here before in winter I was very glad for my jaggy feet, every steep step downwards plastered in ice.
Salisbury Crags came next following the very edge of the ridge along the line of cliffs looking down on the Radical Road below. 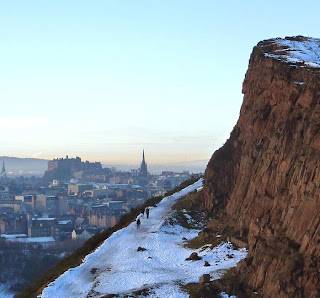 Even this was covered in ice and hard going.Great views over the capital on what was my best ever day up here.This ancient volcano always seems a lot higher than its 800 feet suggests.
Before it was banned folk used to climb on this cliff escarpment. A great photo in an old climbing book always inspired me of gentlemen climbers roped together on Great buttress with the tenements of Edinburgh far below. Magic stuff. 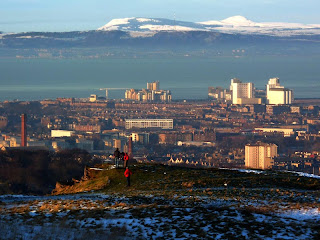 Met loads of people from all over the world up here and stopped frequently for a chat so it was quite sociable.A full traverse of all the satellite peaks followed taking in the views from the best positions.It was such a great day I just didn't want to go down yet climbing back up towards the summit again. 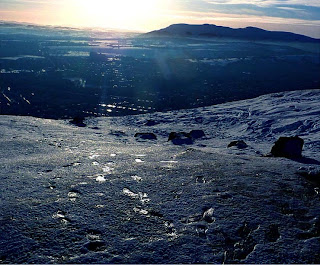 But eventually it started to get dark and the last of the folk headed down towards a warm home. 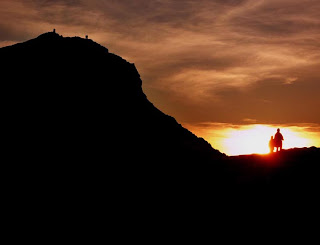 Back at the car headed home myself towards Glasgow, mood music drifting from the speakers. On a whim I went up the Necropolis again in the creepy dark for the views of the city lights but it wasn't what I expected. OK but not that great.Got far better lights in my local car park getting my messages. 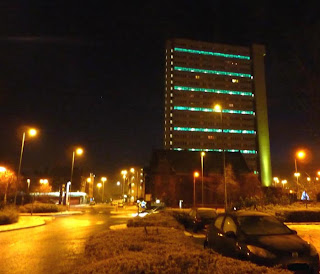 Getting right into night shots now.But wont bore you with too many. 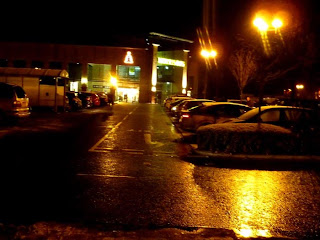 And so to bed.

P.S. Alex had the cheek on the phone to say this blog`s gone right downhill in his absence.Three weeks without an interesting summit trig or fundamental bench mark in sight.Far too many pictures taken above housing schemes and monuments for his liking.What`s wrong with that boy!Ah well I try my best.Besides I`ve promised not to bag any more trigs he`d like to do so my venues are somewhat limited.
Posted by blueskyscotland at 14:02

That's a cracking pic of the 'seat Bob. Looks like a winter Munro!

Don't worry Bob - I reckon you're keeping up the standard. Get out there and bag a few trigs - that'll keep him in his place!

Cheers guys.Must admit the motivations going down somewhat without my old pal.If I get stuck for ideas where to go I can always count on him to chip in. I always enjoy it when I,m out butI,m fed up with winter already.I,m a spring chicken me.

Great pictures as usual Bob.It's a good twenty years since i was up Arthurs seat.Next time i'm in Edinburgh.
Talking about night shots,i've got the ideal accessory.It's a slim 60 year old tripod that belonged to my dad,and easy to carry.I tend to forget it's in the boot of the car.