Alex was feeling knackered after working all day Saturday from 8.00 am until 8.00 pm.
"I don't want anything long "he croaked."Something easy."I wasn't feeling too perky myself after a hard week out in the cold.As the weather forecast wasn't that great anyway I suggested cherry picking the best bits of the River Ayr gorge.We`d been hearing about this long distance walk for a while now and Alex remembered reading an article about big red sandstone cliffs,wires,caves and ladders hidden somewhere along its length or on a tributary."O.K." he said inspired by this vague memory. "Count me in.I`m off to ice my back now with packets of frozen peas."
"Really?Have fun with that then. See you in the morning."


Picked up Alex at 9.30 am and headed for Catrine where he thought this fabled via ferrata might exist.Despite asking several locals and examining the river at a few places where minor roads crossed it mighty sandstone cliffs were conspicuous by their absence.He gave me a strange glance when I was clambering up a steep bank sausage roll in hand after another futile attempt to spot cliffs.
"Don't take this the wrong way Bob but you could have been in that film Deliverance."
"Cheers."
"Might be Mauchline." he offered.We attacked the river at various points near said town and drew a blank there as well.No via ferrata or hillbillies except for me.

Now Alex is a great mate but a crap navigator at times .As soon as he looks at a map in a moving car he gets car sick and we`d been down a lot of twisty roads by now.
"Think its down there". He suddenly tossed me the map looking pale."Wind the window down Bob or I`m going to lose my breakfast."
I stopped and had a look noting the number of minor roads we`d already been down and the lack of decent signage along the river at this point.

"Bugger this .Lets go to Failford"
I`d been there years ago and knew it was gorge like with good access and signs.We parked just outside the village in a layby to the east and walked the short distance to the entrance of the gorge.
The Ayr gorge at Failford.... 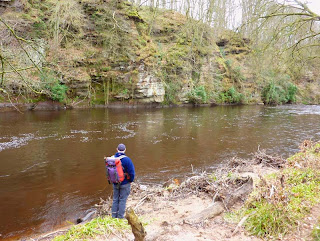 A pleasant but not spectacular gorge walk with a few modest sandstone cliffs brought us to the highlight of the area.Pedan`s Cove where the great man preached to the faithful.
Interesting history on this board.Saves me retelling it. 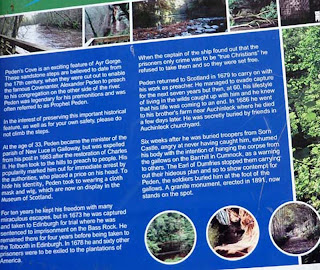 It was only after we`d been up to the ledge we read the board more carefully discovering you are requested not to ascend the steps.Health and safety dilemma for the council again no doubt as they also have a sign saying no kids past here meaning they expect other folk to go up. 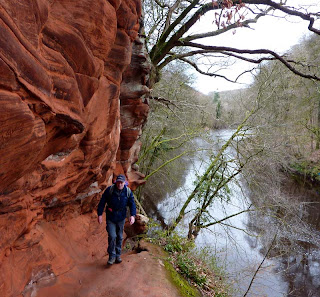 Bob on the carved rock staircase... 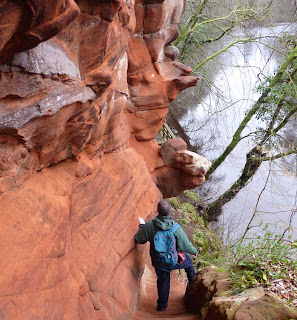 Anyway the cove was nice and quite dramatic and we returned back to the car in better mood.
Still no via ferrata though.After another short walk at Stair next up was a drive to the Lugar water near Ochiltree where Pedan and Wallace caves showed on the map.Nice bit of river.No fabled spiderweb laced cliffs. 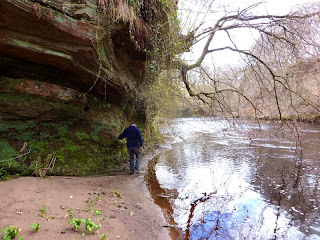 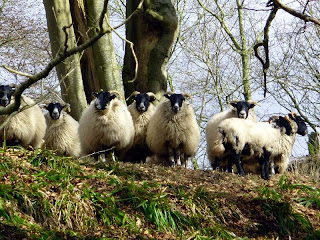 "Right.That does it.Lets go to Loudoun Hill.I know where that is!"This from me, somewhat peeved by this time.
I enjoyed the drive over the back roads to Loudoun Hill,wild scenery and dramatic angry skies.
We stopped off for the walk up Gallows Hill outside Galston to visit the Covenanter memorial and viewpoint indicator on the way.... 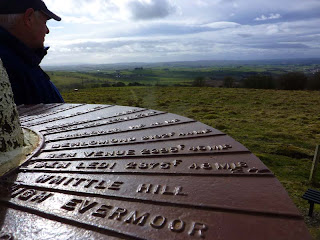 ..... and further on the mighty Distinkhorn,all 386 metres of it,soared to our right.Well,maybe soared is not the right word.Alex has been desperate to bag this for a while.It`s an unusual name for a Scottish hill. 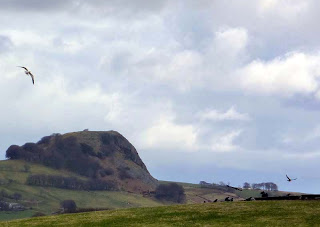 At the car park below Loudon Hill I was keen to see the new sculpture nearby and climb to the summit for a view as I hadn't been here for years.Alex sat in the car reading the paper as he`d been rock climbing here only last year.
"But I think you should go." he grinned. "Our fan would expect nothing less.Take one for the team."
I shot him a look departing but a few minutes later I`d forgotten it as the sculpture was a bit special.A lot of modern stuff just doesn't do it for me but this was perfect for the area.Really good piece of art in my opinion.

The Spirit of Scotland sculpture... 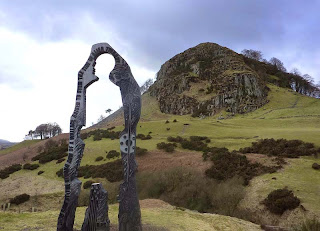 To the victor the weary legs.Views from the top were extensive and clear.I remembered my highlight here many years ago when I seconded the classic rock climb of the crag,The Edge, VS.Here`s Brian leading it. 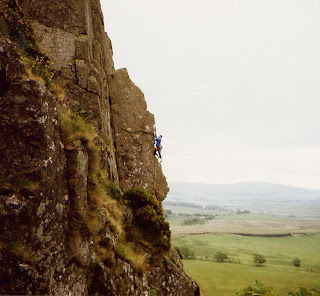 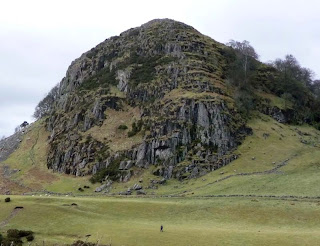 Back at the car Alex was now into the magazine section.More minor roads followed as we took an obscure route back to Glasgow via Ardochrig.
Suddenly a splash of vivid colour on a tree burned itself on our collective retina.Red/orange head black orange body,finch sized.
It looked too exotic to belong in Scotland unless in a cage or a zoo.
"What the hell was that?"Alex exclaimed.
Too fleeting for a photo this time but we looked it up when we got back.
A male crossbill.First one I`ve ever seen.Never knew they were so colourful and dazzling.Brillant day out after a moonshine trousers down where the hell are we start.Didnt get back until after 7.00 pm at night.So much for an easy day.

Another short video from last year of Gavin on the crux of Epitaph at Loudon Hill...

Now that is the kind of day out I need. You were all over the place. I especially love that stone staircase.

Thanks for the tip about St.Abbs Head and the Souter sea stack! It's on my list of places to go, but we're hoping for a dash to the highlands on Monday.

The Ayr gorge at Failford looks a great walk.I'll get my mate in Ayr to show me it sometime.You guys certainly cram a lot into your days out.

It looks good in photos but we are still hunting for the really dramatic section.Think it may be hidden on private land.We get completly lost so you dont have to:o)If you want a really dramatic steep gorge walk(4 to 5 times the height of the Ayr one)You,ll need to ask Alex to go to this favourite walk I have in mind but for some reason he,s never been that keen.
PS. Hey Jim.Loved your trip to the Antrim coast.Looks a great place for a visit.Now that beats the River Ayr! bob.

Cheers Bob,there'll be more Antrim in October.A few ramblers are up for a visit.

Brian and Martina from the Black Isle Scotland said...

Hey the red rock looks great- reminds me of Utah.
you guys should come up north again- did you see the black rock gorge at eventon? Its quite a unique deep cleft- if a bit dripping and dank.

It must be great to be retired Jim.!

Brian,we do intend imposing on your hospitality again sometime soon.Probably not before June though.We plan to take my boat up to Loch Maree and while I do Beinn Lair,Bob will pootle around the islands :o)
Room for the two of you across on the boat if you want to go.

Can`t believe this got that many comments! All of the trips on this blog before this were far more enjoyable..A disgruntled perfectonist.Bob. PS. Dont go to the River Ayr.If you want a great lowland gorge walk go to the Roslin Gorge.Its far higher,better ,bigger in every way!!!!!!!!!!!!!!!!!!!!!!!!!!!!!!!.

Where's Mr Rees' helmet ???? Just determined to splash his brains all over the scenery, isn't he ...
(MARTINA)

He left all his brains splattered at the scenes of his various climbing falls Martina.
Let me see now....sea cliffs at Aberdour,the Whangie...
Alex :o)

Dave ... as you can probably tell, the main purpose of my outing was not mere climbing ... what you see in the video is a sequence of ritual gestures used to propitiate the Earth Gods. If it happens to look like poor climbing, then that's just unfortunate! Gav.

If you want to know where the three Peden's caves are and Wallace's Cave, just ask a Geocacher.