I decided to seize the day by the throat.Up at 6 am and off by 7.20 am bike in car to catch the ferry to the Island of Bute.The forecast was for heatwave conditions, sunny everywhere except for the west coast of Scotland where cloud may dominate.Ran into patchy but thick banks of coastal fog past Paisley then out again at Greenock before finding it again at Wemyss bay.No matter at least it would be cooler.There is a bike and walking route on Bute that is an absolute cracker,among the best in Scotland.A five star day.Since this blog started I`ve been keen to do it but a dodgy forecast has always put me off.It`s so good it should only be done on a belter of a day.Parked in the local garage car park,left my car and paid my £3 quid. 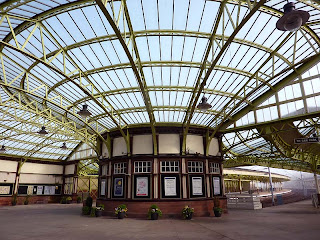 Since childhood I`ve always liked the Victorian train station at Wemyss Bay,a reminder of the days before cheap, safe air travel when everyone took a steamer across to Rothesay in Its heyday.I spent many summer holidays here as a youngster on the island exploring what is a remarkable and fantastic island for walking and cycling.Today's route is the very best tour of the island.A real gem. 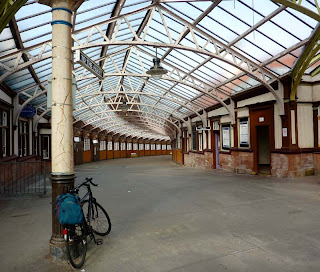 Bute is one of my favorite islands in Scotland yet is largely ignored by the walking fraternity including Alex it seemed.He was back from a family trip abroad so I phoned and asked if he was keen.He muttered something about wanting to go to the Hebrides (for a weekend?) ,then mentioned Galloway,then the heat,then his still troublesome back,then finished by saying I wasn't adventurous enough and should set my sights higher.Bloody cheek! .ie Corbetts, Donalds,etc. things he wanted to tick in other words.
I could tell he thought Bute was flat farmland or somehow dull and uninteresting.This baffles me.A lot of folk seem to have this impression.There is only one word for this Island -Fabulous.
Anyway he declined.Sure Arran is higher and more dramatic but Bute also has its treasures.Miffed by this slur on my character I went on to have my hardest and most adventurous day on bike and foot.Ever! Adventure.....I`m stuffed with it!!!!!!!!!!! 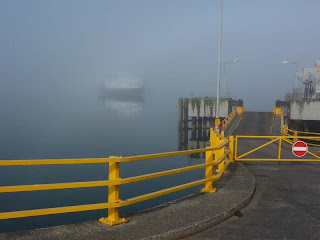 They were right about the cloud though.All the way across the foghorn blasted out once a minute on the upper deck as we chugged slowly through the fog bank.Mainland or any land for that matter invisible in the white gloom.Everyone groaned as the main island town of Rothesay came into view.The whole of Scotland in sunshine and we had this. 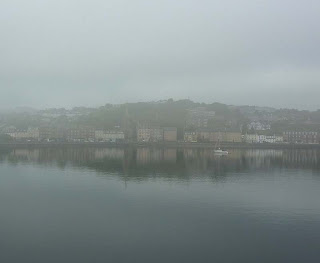 Cold,damp and dreary.
For some reason though I was convinced it would burn off.Sure enough ten minutes later round the corner the sun started to peek through.Lucky for me as this next stretch is a delight as the road snakes past Bogany Point, Orcadia and Ascog Bay,Victorian mansions draped across the wooded slopes above. 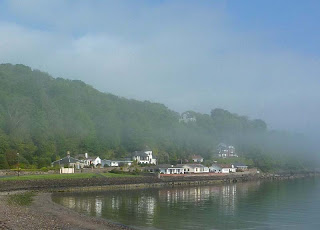 The great thing about this island is that it has so many different types of landscape,a new view round every corner.As I climbed the hill over this middle part of the island it turned into high flat moorland studded with gorse and heather.A few good cycle/walking routes crisscross this area including the West Island Way of which more later. 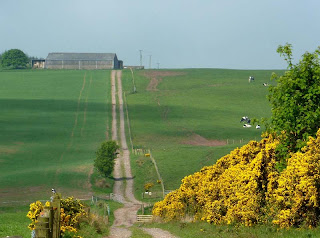 This is just one of them but a mile back from here at a white stone cross war memorial the scenery looks completely different again though still flat, empty moor prevailing across the spine of the ridge.
Kilchattan village was lost to the mist when I arrived .Gateway to the best section of the West Island Way which cuts round low down on this fine peninsula.Almost a self contained island in itself as its different in character again to anywhere else on Bute.The lava spill of an ancient volcano,Suidhe Chatain,the highest hill nearby which also formed the equally contorted Little Cumbrae.
Had lunch til the mist cleared then set off.It had been my intention to hide my bike in woods here ,locked and hidden off the path but that would mean a 2 kilometre detour back to get it.My next thought was to wheel it round the coastal path.I did just that til I reached here.The cliffs of the Hawk`s nib. 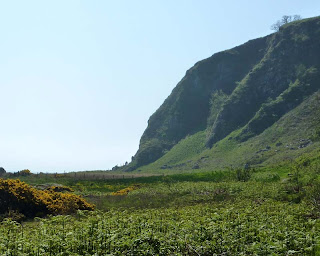 From previous trips I knew the West Island Way here, while good for newcomers ,was not the most exiting route across the peninsula,that lay much higher up crossing the rocky crest of the ridge line over several small but impressive peaks in a swichback loop.
Not adventurous I thought.Right then!!Be prepared to be impressed.
Sholdering my bike I made my way straight up the edge of the line of cliffs on what turned out to be the hottest day of the year so far.I would walk ,drag, wheel or carry my trusty metal horse over the three peaks of this contorted little range.Hows that for adventure Alex ya bagger! Multiple Trig ticking by bike. 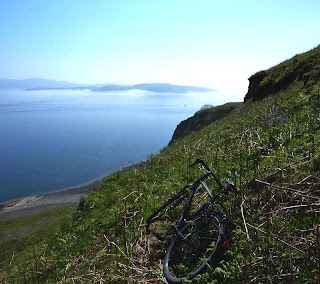 I`m willing to bet this is a first.I can`t see anyone else being mad enough to take a bike over this rugged and trackless route before me.As a walk this route is outstanding, as a challenge with a bike....... believe me...it`s much better walking. 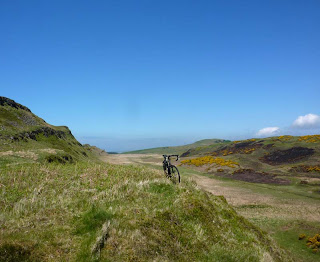 I`ve never sweated so much for years,funny thing is though,the harder it got the more I enjoyed it.And it got hard. 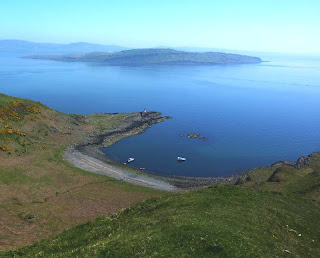 There were a lot of Little boats out to sea, cruising round the island is also one of the great ticks of sailing these waters.This is Glen Callum bay with a beach of volcanic black sand. Large sailing ships used to pull in at the inn here in the great days of the spice trade waiting for favourable winds to take them to the other side of the world.It was a rough place then with pirates and armed escorts.Now its deserted and empty, even the lighthouse fully automated. 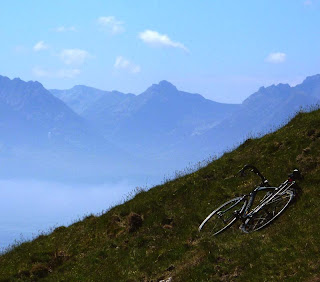 This was the view from the middle peak.A cracking hill. 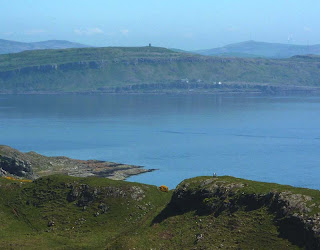 They call Bute the Undiscovered Isle in tourist signboards here and it`s true.A glorious day in mid May and very few people over here.None high up on the ridge line,just me and my metal monkey slung on my back :o) Boy was it hot. 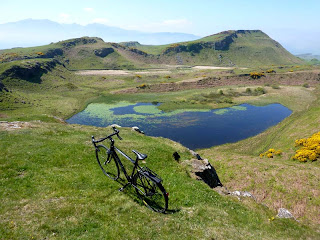 This is the nicest little lochan I know covered with flowering waterlilies.St Blanes hill behind.A smashing hill, steep and complex due to gorse everywhere up the ridge.
Oh look Alex. A trig you haven`t done .Captured by bike. 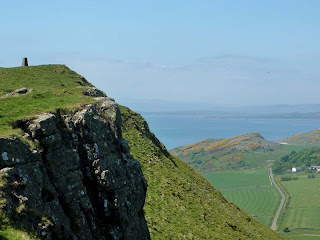 A really steep descent where I used both brakes all the way down even though I was walking beside it to slow us both up took me to the peaceful ruined chapel of St Blanes where I lay in the shade of the giant trees here for ages recovering.A lot of food and several bottles of fizz from my rucksack got consumed.
When I felt refreshed I headed off,gladly trading sore feet for a sore bum again.The only way I can beat this is to do the entire Arran ridge carrying rubber I thought happily.(I think I had sunstroke by this point as this seemed like a good idea too!)
On the road I headed down the A 844 then the B881 past Loch Quien and Loch Fad.Both stunning lochs in a mini Great Glen trench. 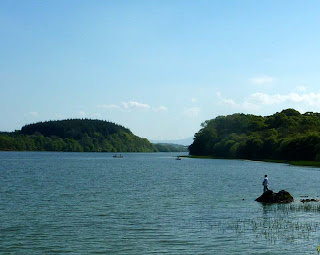 A great two day backpacking trip around Bute would be to start at Rothesay,go up Barone Hill and along this open easy ridge until Tarmore hill then drop down onto the West Island Way.A wild night camp somehere on the penisula (Glen Callum bay or on top of St Blanes Hill?) then a return via the Suidhe hill and the Butts moor over the causeway splitting loch fad back to Rothesay.This would be a delightful outing and I`ve never seen it in any guide book.The Undiscovered Island indeed.There.....I`ve given you one of my most treasured gems giftwrapped with a bow.Go on a good day and you will not be disapointed.A fabulous walk.If you are completly insane you can even drag a bike over these hills. (There are buses from Rothesay to Kilchattan.) I`m an adventurer.I like to do things the hard way! 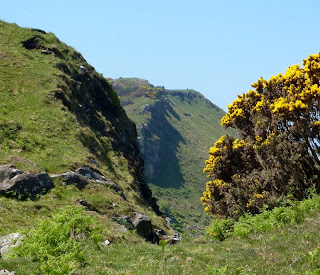 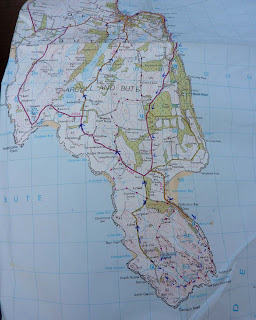 I've been dying to get to bute for so long, and after seeing these photos I have even more reason to go. I don't think I'll be as adventurous as you however.

Tremendous stuff Bob. I spent many a happy day wandering the south end with my Papa when I was a boy and your photos brought back many happy memories such as my first mountaineering expedition which culminated in planting a flag on the summit of the Suidhe.

Glencallum Bay is a place I've always intended to camp out.

There used to be a few young oak trees planted by an eccentric relative of mine in the area, did you spot any?

To Purestgreen.You should pick a nice weekend and go.Dont think you,ll be disapointed.Good walks from Rothesay itself straight from the harbour up hill to Bogany wood trail(big wood on Left of town which leads to Ardencraig gardens( small but pretty) which has a collection of small birds as well.Also Canada hill above the town.The causeway across loch Fad makes a nice walk.And the Skeoch wood to Port Bannatyne then return above via farm roads.An easy day on the bikes round the southern half of the island is also good.I,ve not even mentioned getting a bus to Mount Stuart and its extensive grounds for a tour round the Big hoose.Thats a day in itself. Bob.

To Gavin.Did see some oak type trees around the upper resevoir area above hawks nib but I was a fair distance away from them.Its a fantastic island.did you visit the caves on the coastline near Garroch farm?I spent a night in one(the one highest off the ground )when I was 16 watching thunder and lightning crash over the mountains of Arran.Still one of my best memories.And it still feels like going back in time when you step off the ferry.Its got a lovely timeless appeal. bob

Never been to Bute Bob.Gonna add it to my growing list now.
Jim

Looks like a great trip! Fancy doing it, maybe without a bike! My only visits to Bute have been constrained by the city limits of Rothesay.

I've still never been to Bute - another one to add to my to-do list!

Gosh. Its going to be busy on the island if you all go.The southern end is the best part by far.The northern part is good but only once you get right up to the coastline round the kyles of bute.And its trackless heather or forestry.not as scenic or as interesting.The Kyles are best seen from the mainland road by bike across the wee ferry.I spent the night here as well on the northern coastline above the maids of bute in a concrete WW2 pillbox and was attacked in my sleeping bag by a weasel.Fiesty little blighters. Put up a good fight.It was his home too.I ended up sleeping on the flat roof above it.Bob.

Bob, looks like you had a good wee jaunt round the wilds of one of your fav places in the west!

Yup. You guessed right Mr V.Pretty fast on the roads but not bad over rough ground too.Great on sand,really zooms along but I cant see you taking your,s onto a salty beach.