Islay. Day Two.
A lot of firsts for me this trip.First time in years I`ve been away multi day camping.First time exploring Islay.First time in a pub three nights in a row for many years too.I can now see why so many pubs are shutting though with the price of a round of drinks.Ye Gods and little beasties! Next time I`ll bring a good book and a cheap bottle of supermarket own brand paint stripper with me.
Anyway, after landing we put up the tents,Port Charlotte campsite-£8 a night but full facilities,after a jaunt around the Rinns visiting Portnahaven and a few other scenic places. 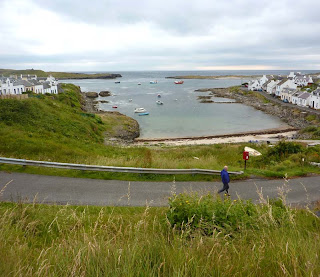 Night came and the lights of Port Charlotte looked cosy and inviting compared to the quivering tents. 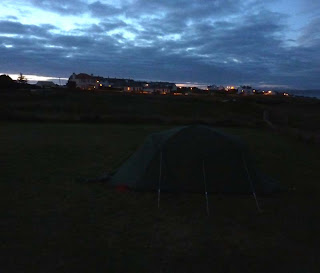 We were seized by first night fever to bag a new pub.It was surprisingly cold for July.
Five minutes into our walk the heavens opened and we were soaked on the exposed and windswept road into town. 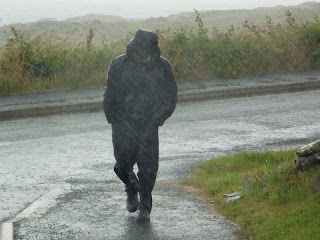 This was a novel experience for the Blue Sky boys these days.A bus shelter gave a brief respite from the deluge. 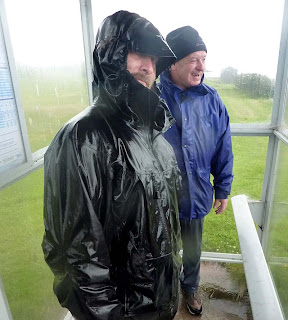 We actually enjoyed it as we`ve not been rained on like this for ages.The weather forecast had been for heavy rain and winds and the higher hills indeed remained under clag for most of our stay.Wet trousers were quickly forgotten in the pub where a few cheery beers were helped down by traditional live music that first night. 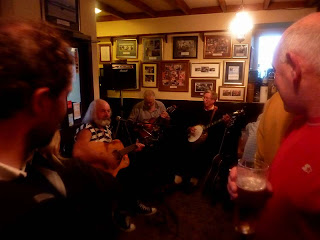 Being loyal to the island Gavin sampled his way through a range of malts on offer over the coming nights while Alex and I stuck with pints.
A fine time was had and a dry walk back to the tents now rattling in the ever present wind on this exposed but scenic site.I was glad I`d brought the solid, heavier Vango this time as I think the lightweight Eurohike would have been given a real test.A neighbours tent... 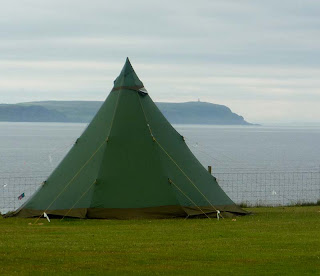 Next morning, from the campsite we could see the Mull of Oa between bursts of heavy squalls as we sat in the panoramic cafe-restaurant on site debating what to do.The tents had taken a bit of a battering during the night and Alex`s was leaking slightly.This proved to be the pattern for the trip.heavy rain at night and early morning,brightening up into good if wild windy days.Superb for coastal walking.It was a done deal.Mull of Oa it was. 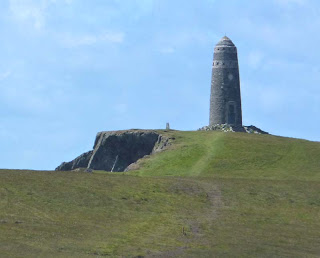 The American Monument at the Mull of Oa stands in a very dramatic situation on the edge of a set of cliffs carved on a majestic scale.The walk around the cliffs from here to Beinn Mhor must be in the top ten coastal walks in Scotland and I`ve done quite a few in my time.An age ago they used to call me Captain Coastwalk I`d done that many. 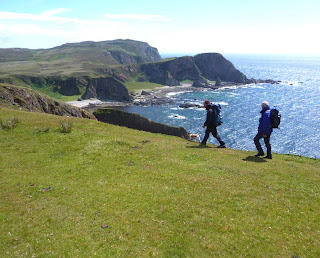 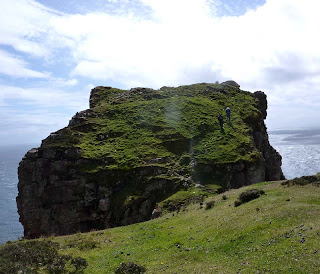 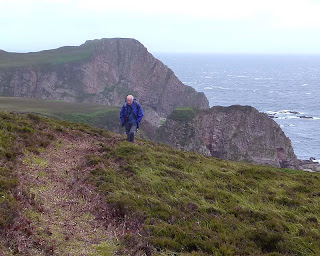 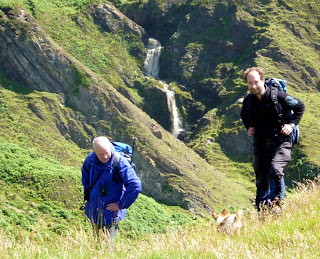 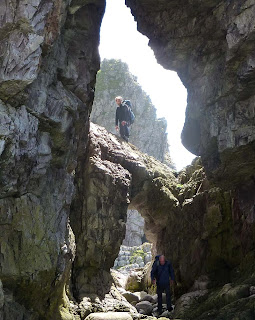 It had the lot.
Herds of wild goats,sheep and rabbits creating the only paths round the cliffs.Halfway round we descended to explore a sheltered shingle beach.Port Nan Gallan.
A stunning coastal walk.
On a dark night however it must have been a terrifying end for those American soldiers and sailors who died here from drowning, exposure or smashed against the rocks. 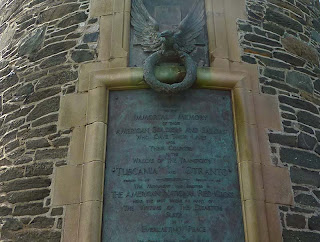 Many ships,wildlife and people have come to grief on the beautiful but deadly west coasts of Islay and nearby Jura.We spotted the remains of quite a few dead goats, sheep and seabirds, casualties of storm or cliff fall. 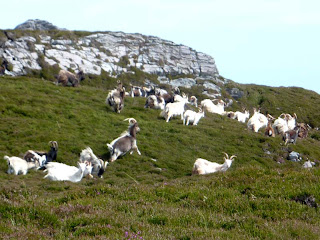 These ones were still full of beans though.And no they are not heading for the cliff edge :0)
A fair number of people come to Islay to tour the distilleries for which the island is rightly famous.Cycling is popular too,though a trial in such windy conditions.The numerous quiet sandy beaches and secluded coves are a big draw as are the scattered gleaming white townships placed around the island. 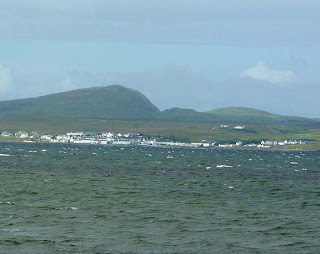 But despite many years travelling outdoors in Scotland I`ve never came across anyone raving about Islay`s fantastic west coast line of cliffs.Maybe I`ve just not been listening or looking in the right places though and it has slipped under my radar.I`d have to admit Islay was always a place on the back burner but more for a cycling holiday due to its lack of Munros.I stand corrected.What an utterly brilliant island. 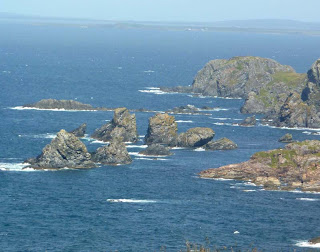 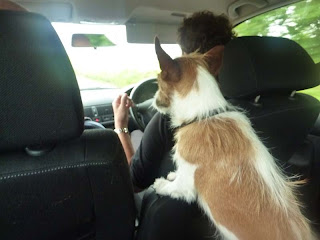 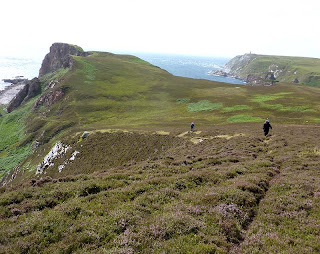 Many thanks to Edi,Gavin and Millie (back seat driver extraordinaire) for getting us there.

For me the highlight,one of many,was the spectacularly sited hill fort of Dun Athad .I`ve been to most of the famous ones but this one was a bit special.! Click here and then click on the picture to see just how well it is situated.

More information on the American Monument and the sinking of the Tuscania can be found here and here.
Posted by blueskyscotland at 19:12

Lovely. You boys have got your priorities right! Like yourselves, I'm a firm admirer of Islay's west coast. There's some fine walking to be had and not so many people aboout once you're away from the lovely beaches. Walking along the coast from Sanaigmore to Saligo Bay via Dun Bheolain is a gem. The Mull of Oa in a strong wind is a very refreshing experience. But after a day out amongst the weather, the delights of the Port Charlotte Hotel are all the more delightful.

Loved the post about Mala Bholsa and the one about Arran too.

I take it Captain Coastwalk is reborn then Bob.
Great account and pictures.
I was prompted to take a quick look at Islays Shipwrecks.It looks like it's a magnet for diving clubs there's that many.
Look forward to the next instalment.

Cheers Jim.It would be a magnet for divers round these cliffs but they would need an access boat.I,ve had the full diving kit on, weight belt,tank etc and you can only walk a stones throw in it.Bob.

Intrigued to know what your other top ten coastal walks are? I'm compiling a list myself. There's more to the outdoors than Munros. Never been to Islay (well, once as a toddler, but that doesn't count!)

Had to think about this one!Firstly I have not walked every streach of the Scottish coastline and all the islands.Few have I suspect.Also it depends for me on sunny conditions as I,ve lost count of the stuff I,ve explored up north in poor weather where I couldnt really tell if it was fantastic or not due to mist and cloud. However,Sandwood bay to Cape Wrath was a disapointment even in sunshine, dont know why.
Heres a list then of areas I have done in good weather and really enjoyed which is what its all about.Cant put them in any order they are all great in their own way.
Mull-Carsaig to Carsaig Arches.
Skye-Idrigill point to Neist point.
River Eden to Tayport.Low tide cycle or shorter walk to Elbow to see seals.
Arbroath to Auchmithie sea cliffs.
St Abbs to Fastcastle.
Dunbar harbour to Tyne mouth.Walk or L T cycle.
Burntisland ridge walk return along the beaches.(not kidding).
Anstruther to St Monans.
North Berwick to Fidra.L T cycle or long long walk.
Bute.Anywhere. west island way south if pushed.
Troon to Irvine walk.Back by train.
Saltcoats to River Irvine mouth.Fantastic L T cycle Across three beaches in thunderstorm.
Whiten Head and Faraid Head both near Durness.
Portpatrick to Broadsea bay.
Bet thats not what youve got or what you were expecting:0)
Its like music.Everyone has different tastes.
Devon and cornwall coastal path has some cracking sections too.Bit between Lynton and Illfracombe is stunning as is Boscastle to Tintagel.
Anybody else want to chip in?

I`d ditch the Ayrshire ones :)

Ruadh Reidh to the bay at Camus Mor north of Gairloch.
Achnahaird Bay round Rubha Coigeach to Reiff.
Point of Stoer.
Cliffs around Kearvaig at Cape Wrath.
Rubha Hunish on Skye.
Aird Mor Mangurstadh headland near Uig,Lewis.
Rockcliffe to Sandyhills.
Balcary Point.
Start at the Mull of Galloway and walk up the west side of the peninsula.

The reason the Ayrshire ones and Fife and East of Edinburgh make it in? Not only are they good, being a short drive away and low lying away from mountains good sunny conditions are a given after watching a forecast.With the ones up north unless you stay nearby its pot luck by the time you get up there. But I agree with your choices...Bob.

Superb photos chaps. I fully intend to camp on the hill for in the near future. Hope to be back in Islay soon. Gavin.

Just seen your lists! Wasn't expecting all the Ayrshire! Carsaig arches and sandwood - kervaig would be on my list. round of rubha coigach too (ending on meall an fheadain, Scotland's best panoramic viewpoint)

Would also go for fife coast - st Andrews to elie, elgol to loch scavaig, durinish coast, skara brae to stromness, the round of eshaness (loads of places on Shetland I've never been, but suspect it is the best place in Scotland for Coastal walking). Plenty places like nw Jura or all of islay I've never been...

If I could move the border a few miles south then berwick to lindisfarne at low tide would also be there!

Good heavens man.This reply is so long ago
I,ve forgotton the question! Same speed as the St Kilda SOS boat:0)(a Wooden Message boat tossed into the sea which could end up in Scotland or Brazil depending on the currents.)
Glad to be of service.