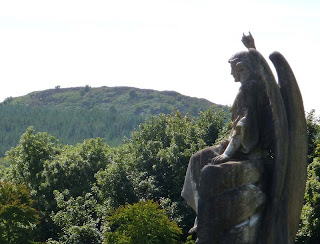 Greetings and apologies folks. Due to the Islay three day mega post this is rather late.We better not go away anywhere interesting for a two week trip like our old club used to every year or this will turn into a thousand page a post exercise.
The week after Islay I had the opportunity to go over to Bute again for the day.Asked Alex if he wanted to come as it was a cracking forecast but he was busy.Also, I suspect, a visit to the self styled " undiscovered isle" did not seem to be high on his wish list despite having several trigs to bag here.
This is a mystery to me,this apathy among the outdoor troops for Bute.
So,back on my favorite island again solo with my trusty bike.I fancied a relaxing easy day as I was still slightly knackered from Islay.Bute has such variety packed into a compact area. 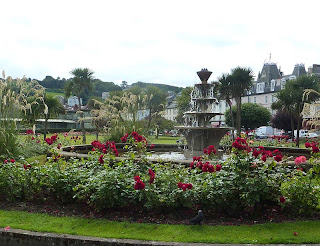 This is the winter gardens to the right of the ferry.The shows were in town. 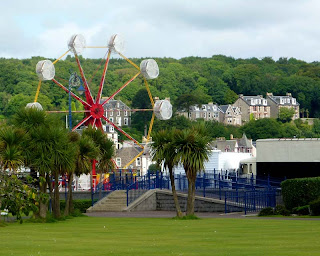 Luckily for my wallet though I could make my own entertainment and thrill rides for zero cash outlay.
As the ferry was coming in the idea of cycling up all the hills of Rothesay appealed and tired legs were instantly forgotten in the blood rush of this new plan. 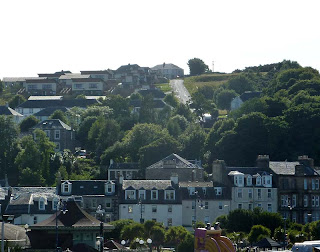 This is the hill up Ballochgoy near where international child star Lena Zavaroni grew up and went on to tour the world playing for kings, popes, presidents and old blue eyes Frank Sinatra.
It is also incidentally where the north part of the west island way cuts through so I decided to follow that.
Up a steep road near the pavilion then I had to get off and push to climb this steep and beautifully neglected flight of stairs beside the old abandoned Rothesay Academy.I love places like this that are almost forgotten,reclaimed by nature and her children. 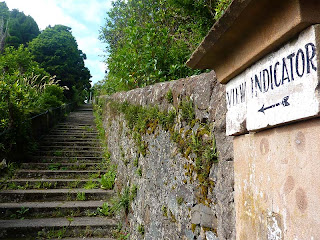 Up another steep road then out, passing the discreet island dump and landfill site following the dots and dashes on the map as they zig zagged across grassy fields and rutted lanes towards Port Bannatyne.The views are smashing throughout.This is really a walking route but as ever I was happy to push and lift in places.My reward was meeting an old farmer with his dogs who remembered the dummy town during the second world war set up at the northern tip of the island ,near the burnt islands.Long chains of lights draped over the empty hills around the kyles to fool the Germans into dropping their bombs on this fake Greenock.The concrete pillbox the pesky weasel and myself used to reluctantly co- habit as a sleeping doss probably held a generator used to power the lights.
Must have been comforting hearing planes overhead for his parents when like him you lived on a farm just across the water on the Colintraive side.At that age though he must have found it all a great adventure from the usual feeding the beasts and farm life.
Kames Bay passed by then the up and over across the island to Ettrick Bay where trams used to run taking the Victorian holiday makers to the broad sands of the beach in droves.Like Lena, in their own time they were famed far and wide.
Nowadays its still nice here but mainly empty,one small cafe and car park and a mere scattering of families on the sands compared to hundreds in its heyday before cheap air travel. 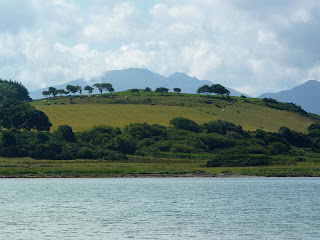 Bute in general is amazingly quiet considering its sheer brilliance for walking and cycling and its proximity to Glasgow.Mind you I like it that way.
As it was low tide I cycled along the sands but for once this beach didn't work,too deep and sandy for easy travel.I then followed the main road south round the island,traffic free and filled with honeysuckle and other wild flowers overflowing from the hedges like a burst sofa.This was after all, a Bute main road.
Good views down to the fertile island of Inchmarnock and the remains of St Ninians Chapel on its low spit of land.Lugged the bike up Tarmore Hill for spectacular views over Arran.Met some fellow cyclists here on the road below the ascent. 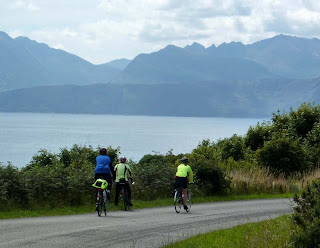 Also a father out with his kids for a days cycling round the island and stopped for a chat. As you can see I`m not one of these heads down,beat the clock type peddle pushers. (Hi Scott and Alistair!) For one thing I screech to a halt every time I see a good picture.Its like golf when you indulge in photography I`m afraid... its a good walk/cycle spoiled! 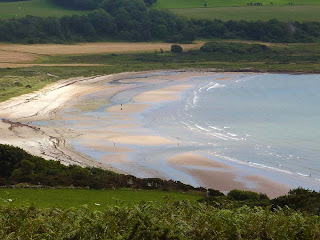 Scalpsie Bay looked incredible from here .Wild and empty with deep blue water and galloping white horses.It looked great for swimming but I knew it would be freezing even in high summer and settled for a much needed can of coke at the Kingarth hotel instead.It was starting to really heat up now and I`d used my stock of liquids.The little black objects in the bay are wooden posts,not people.This is after all, a pristine Bute beach :0)
Next up on the tick list was the Moor road which cuts across the spine of the island above the two main lochs,one of which is seen here and has a real upland feel.Its the high point in this picture. 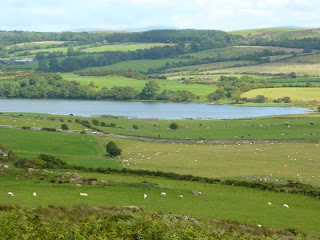 I returned to the West Island Way again at the memorial where the main road splits here and a pleasant track is followed rising gently over the ridge with only a few remote farms for company along its length.This is also primarily a walking route though this one is ideal for bikes too.
The tranquil waters of Loch Ascog being the highlight here. 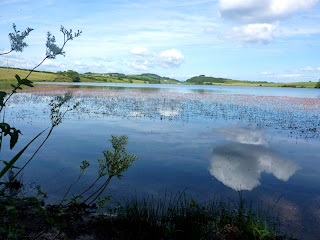 Bute has some truly beautiful lochs.
Freewheeled back down towards the outskirts of Rothesay again but I skirted round it to climb 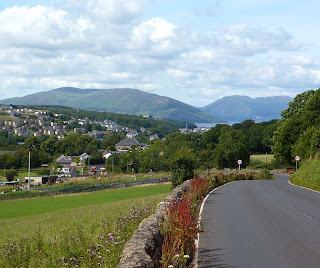 Canada Hill by way of the twisting serpentine road then up through the edge of the golf course to the summit.One of my favourite seats is up here with excellent views over the Firth of Clyde. 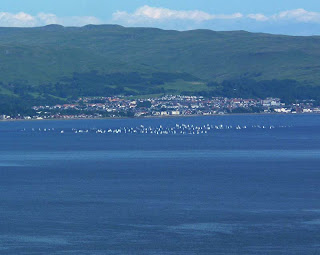 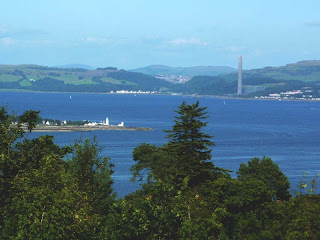 A munch was called for ,chewing down on Mr Kiplings finest jam tarts and smoked applewood cheese slices.
On my annual childhood trips here with my family we sometimes stayed in this grand residence overlooking the bay which is now a private abode but then used to be holiday self catering flats. 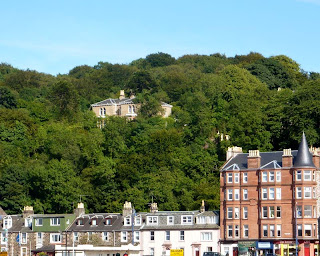 Still framed by two giant monkey puzzle trees Bogany Wood ran right up to the door,the edge of a mature forest of trees stretching round the hillsides with paths galore.For a young boy that loved the outdoors this was heaven on earth and my parents hardly saw me for the two weeks of the Glasgow Fair as I explored my kingdom.
After Canada Hill I drifted down to Ardencraig gardens,a lovely compact place with a long aviary against one wall full of twittering small birds and a cascade of tiny ponds.There`s not much of it but what there is is superb.As it was after 3.30 now it was shut though,denying me my photo of its wild riot of flowers.
No matter. What I was really after here was the marvelous gliding freewheel though the Bogany Wood back to Rothesay, on a gentle dirt ribbon high above the bay.It started just down from the gardens.This too is also a fantastic walk in its own right. 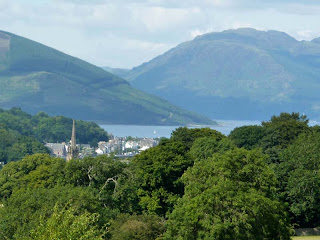 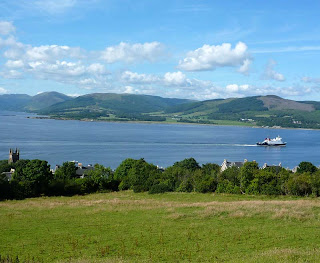 An excellent day out in great conditions considering the prevailing weather at this time of year,the Scottish monsoon season......otherwise known as high summer. 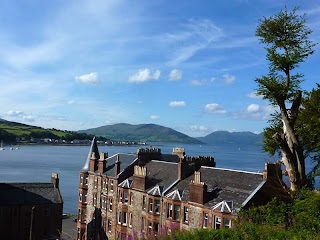 Even managed to catch this huge cruise ship at Greenock docks.Imagine what it costs to go on one of these monsters.For under a tenner I`ve had such a fantastic time.I may be relatively poor but I`m so lucky to be a outdoor creature.The simple pleasures truly are the best. 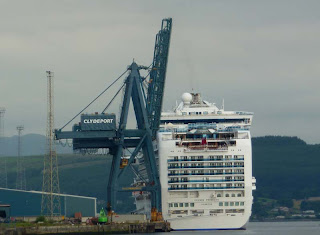 PS... For those interested our music blog is now up and running.I realise everyone has different tastes in bands.Don't worry though its not the music that's the star of this.It contains some of the most beautiful,thought provoking, or inspiring videos I`ve seen on my years browsing Youtube.The music is almost incidental to the images on show.It`s worth a look.You will need a heart of stone not too be moved though.....or entertained.I`ve sat through major budget films that contained less ideas than these three minute wonders.At the moment its all my choice but Alex may even post his hairy sporran clip if we get a good response.
Posted by blueskyscotland at 20:08

I was delighted to see on your blog you also had an interest in rescue animals .Gavin rescued Millie last year.
There is a video of her demonstrating her agility,or stupidity,on the link below.I`m not sure which :)
Alex.

Nice work Bob. My Fiona's always telling me how great Bute is and I'll just rustle my maps looking for somewhere ever more obscure and remote to visit. Truth is that some of the wildest, quietest and loveliest places are often under your nose (or near Glasgow in our case!).

A visit by bike seems to be the way to go, so, inspired by your example I'll follow in your tyre-tracks in the near future.

You've also reminded me to read Andrew O'Hagans's novel 'Personality', which is based on the life of Lena Zavaronni.

Hi Pete.Bute is a great place to visit and a bike is the best way to explore it as you can visit most of the highlights in a long summer,s day.Haven,t read that book about Lena Zavaroni yet.Not really my kind of music but I,ll give it a go. I used to get the ferry over to Rothesay a lot many years ago and if she was back over on a visit she would be led to the off limits upper decks to avoid the tourists.Fame can be a very lonely mountain to find yourself on methinks. Bob.

Hey Bob,I'm the last to criticize anyones grammar.I'm probably opening myself up here,but it might have been less destructive if the Germans had 'drooped' their bombs.
You may be on to something here,it'd be an end to war as we know it.
Jim

the video was wonderful
I bet she'd love to be shot out of a cannon too ;)
what a free spirit
and the photo of her below the video melts my heart

every animal who has ever owned me has been from a shelter
in my younger, more agile days I did rescues on the streets of Brooklyn, NY

animals are the best people I know :)

Well spotted Jim.I did notice that typing erroor but I,m too busy having adventures during this excellent BBQ summmer weather to bother with the mundane stufff of life.
Wait till you see our next post.Its a belter.Alex,s turn this time cos I,m in the huf! :0) Bob.

Bob`s right in that we have just come back from a three day trip to somewhere special :)
It will have to wait for a week though because we have a big backlog and I`m going to do one of them first..
Alex.