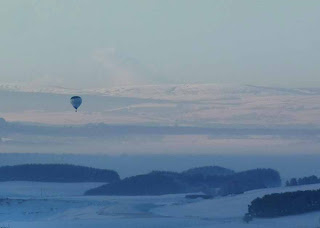 As we have not had a hill post for a while due to me being out of action here,s a photographic  homage to an area I,ve long held in high regard.This balloonist must have had some view from the basket, air and land so still and frozen ice crystals were forming  in front of your eyes as you watched. The gentle breath of angels. While the Eastern Pentlands, close to the city of Edinburgh,are a compact bunch of linking ridges and shapely peaks well frequented by walkers in all seasons the South Western end of this range runs towards hills that are more spread out  and singular with an empty feel to them.Black Mount and Mendick hill,Mount Maw and the Petrifying Spring,Catstone and Fadden,Bleak Law and the Crane Loch.Names to give  Imagination wings. 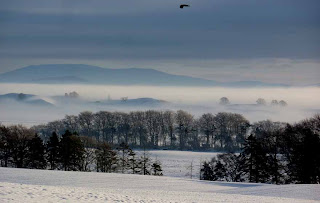 In the right light and certain conditions, the wild lands between the River valleys of the Mouse Water,The Medwin,The Clyde and The Tweed possess a rolling pastoral and soft pastel beauty all their own.I,ve tried to capture something of the essence of this remarkable landscape in these pictures. 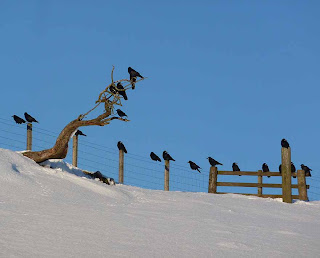 During the months of bitter cold days and long sub zero nights those animals and birds not lucky or small enough to live and hide under the sheltering blanket  of snow simply have to endure the conditions.Too much movement wastes precious energy so they wait and watch,alert to any movement or chance of a meal in a harsh white world. 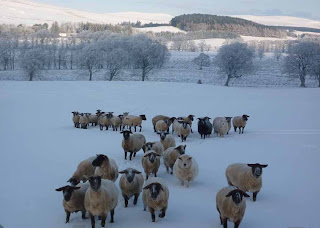 A lucky few may  find comfort in the dual edged agreement that is the kindness of humans. 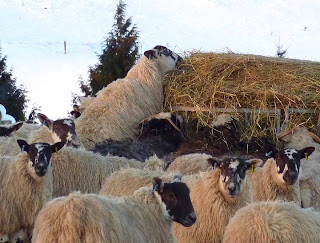 A good meal here for all.....In more ways than they can know.But for the moment they are cared for.Oblivious to the fate that awaits us all in one way or another. 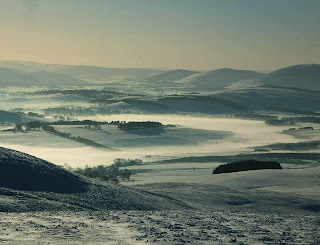 In places mist hangs over the landscape and as night returns it creeps back into the low places and river bottoms like a spectral army.With it comes a new and intense damp chill. The world of the Frost hollows.
Here the temperature can be ten degrees colder than on the surrounding land as supercooled air from the heights drops down to lie deep in the valleys.In the distant past hard lessons were learned when in some places entire flocks perished, trapped in these Devil,s dimples. Some modern farmers new to the area sometimes change centuries old traditions and field structures then find out there,s a reason for that  weird escape route after all upwards to higher ground for the beasts. 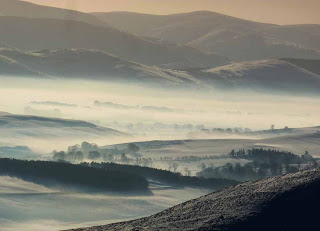 The last of the light hits the peaks and animals huddle close.Another sixteen hour night approaches to suck the life from wool, fur, feather and bone.Humans wander back to cosy cave and tavern bright,sodium and neon,Coal,gas and furnace separating them from those who simply endure. 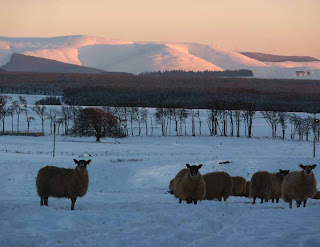 And so comes the night, its long shadow fingers touch and taste where sweet sun has lain but an hour ago, draining all memory of heat from this soft deep pillow where some unlucky few may find forever sleep by the morning.In cracks and holes in special warm trees the tiny birds who flock together,Sparrows ,Goldcrests,long tailed tits,wren and firecrest cram in together in  tight  packed balls of heat 20 strong hoping some at least in the middle will  survive the darkness.In hard winters a yearly sacrifice  played out unseen.( Almost two million goldcrests perished in the UK in the 2009- 2010 winter alone.)
In milder winters they bounce back though with a bigger clutch of eggs.Such fast and hard tiny life's. No Tinkerbell had a heart  beating so pure or strong within her breast. 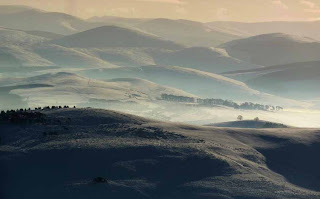 Looking towards the great  Southern Uplands Chain. Winter in the Pentlands at minus -21 overnight..
Posted by blueskyscotland at 11:55

Exquisite words and pictures Bob.
Are you sure you're not contracted to the Scottish Tourist Board.

Not that I,m aware of Jim though Hilton hotels left a cheeky comment on my cheap culture tour of Glasgow sights post a couple of weeks ago.As in why not stay at the Glasgow Hilton while you enjoy your free tour of Glasgow.
It,s staying deleted til they send Nikki and Paris round to my gaff to make amends....Then I might consider it.
Mind you at my age I might just show them my climbing photos albums as a suitable punishment.

straight from the den said...

Cheers Straight from the Den.
I do my best.

Love that birds on the fence and tree shot. Also the sheep feeding one too - I nearly got one the other day where a sheep clambered on top of another one to get to the top of the feeder but it got camera shy before I could focus and jumped back down and just started at me! ;-)

Some lovely inversion photos there,
Carol.

Hi Carol.
Looks like its going to be a milder winter this year.Seen a few tiny Goldcrests up at Kingussie on Saterday.The smallest bird in Europe and one of my favourites .On those rare occasions when they fly around you up close it does feel like fairies are paying you a visit.

Just catching up on your blog after a while Bob. Beautiful words and pictures