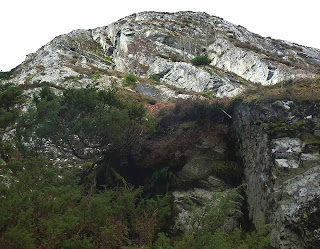 The not so little Cliffs of Creag Bheag.
After ten long weeks away from the mountains I was finally fit enough leg wise to get back into hillwalking again.Our club had booked a climbing hut near Kincraig under the 4000 foot wall of the Caringorm Plateau( This reaches 1309 metres in height on Ben Macdui ,the second highest mountain in the British Isles after Ben Nevis at 1344 metres and is  part of the largest single area of high ground above 4000 foot anywhere in Britain.) Seven of the 10 highest summits in the nation reside here on this tundra like expanse of windswept granite domes and cliffs .I,d missed the last two trips up north but I was determined to go on this one.Alex was also keen to bag two new Corbetts in the area so we motored up on Saturday morning and two and a half hours later found ourselves in  the small Victorian  resort town of Kingussie.This has some nice period main street buildings and some unusual modern style domestic housing with large porthole windows which always catch the eye. There is a necklace of small towns just off the main A 9 hereabouts but this one has the best portholes.Newtonmore and Aviemore Lie either side of Kingussie, each a few miles away.
Reminds me of hobbits.But maybe that,s just me. 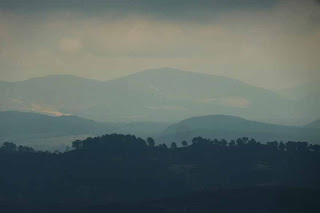 We,d both seen the forecast before setting off. Dull raw morning.Snow and hail flurries.Minus 1 to 3 on the summits coupled with a 40 to 50 miles an hour wind from the north west.A chance in the afternoon of a brief hole appearing in the Aviemore region ,clearing to sun and blue skies,wind dying down slightly. Tropical for the Cairngorms in early March.We arrived at half ten am and went for munchies in the local food and booze emporium in no hurry to go up the hill just yet.
Hot snack for driver Alex,Big sticky bun for me.
Even though friend Satan is always at our side these days you,ve got to give him time to do his stuff.
Inside the shop two pretty young Saturday teenagers were serving us wrapped up in  big woolly jumpers, fleece jackets and scarfs.Due to the warming effects of the Gulf stream(Actually the North Atlantic Drift here)You tend to forget  Scotland  is at the same latitude as Kodiak in Alaska,Hudson Bay in Canada and Moscow in Russia.
Although they were smiling and cheerful I felt a wee bit sorry for them.When you,re young like that you should really enjoy a childhood  filled with loads of memories of T shirts,shorts and long summer days.Poor  wee girls.
Some of my best memories come from those times.Summer is such a brief affair up here though.(Its not too great in Glasgow either come to think of it outside of our Devil,s circle of eternal heat and golden glow.)Poor wee Glasgwegian,s as well.. 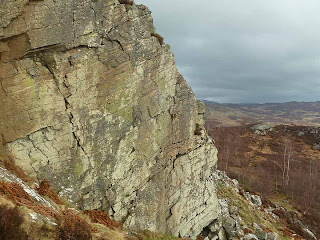 Anyway,thanks to Alex we parked up near the Golf course and set out for our different objectives.As I didn,t know how I would be on my first real hill after my injury I thought I,d walk solo up the rocky summit above town.Creag Bheag. At 486 metres (1594 feet) it has a good path up it,looked full of interest and I,ve since learned that Glenmore Lodge use these outcrops for rock climbing training sessions when its too grim up on the walls of the plateau cliffs.There was ample evidencee of chalk marks on them on good looking crack line routes from Diff to HVS at a guess.About 20 metres high.
Alex meanwhile could go at his own pace up his Corbett of choice nearby without me holding him back.I didn,t fancy it much anyway as,being higher, it was buried under a thick blanket of dark cloud.
The route to the top was straightforward. Bang on time at 12 o'clock the sun came out and I sat on the grass with my lemonade and another big sticky bun (this one filled with jam) admiring the views.God bless you Satan!  Old forked tail comes to the rescue once again. 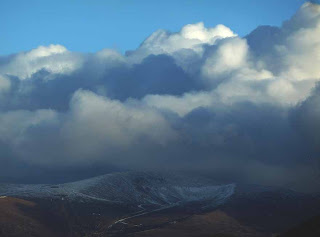 Looking across at the Cairngorm plateau  however the Almighty was putting on a different kind of show here for his followers.Yang and Yin. All dark sky,thunderclouds reaching towards heaven and murky clag.It was a hell of a fire and brimstone sermon he was delivering on the heads of his trembling troops.Where were the rest of  our club I wondered to myself as I put on the sun tan lotion and lay back on my  pillow rucksack.
Why they were right under it of course.Drawn like liitle multi layered magnets towards the pull of these mighty Munros.
Later in the hut they told us of skidding across this very plateau over ice covered slopes towards the waiting  cliffs,struggling to make any progress against the howling wind.
"Tell me about it" I said.
I knew all about howling winds myself.Sunbathing on the edge of the cliffs on nearby Creag Bheag I lost the best bit of my bun to a playful gust  right over the edge when I put it down to take my fleece off.Talk about howling! 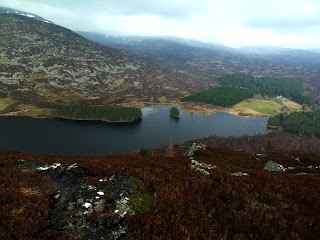 There was a nice Loch below and a trail marked on the map that went right around it.Loch Gynach.As my leg still felt not bad I decided to take this path downhill then follow the trail towards Newtonmore round the loch. It was a good decision as it was a belter of a route,suitable for walkers or mountain bikers with interesting views throughout.Not long, about 10 klms on this one circuit, but with plenty of additional add on mileage available throughout if you desired. 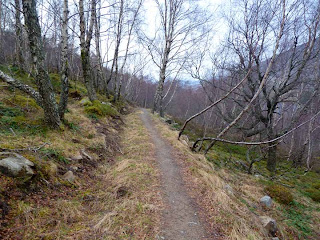 Some of it was single track like here, other sections around the loch were on land rover track.I managed to spot woodpeckers,long tailed tits and Jays here.This path runs above Loch Gynach. 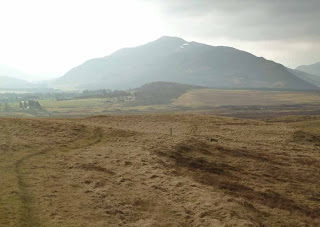 This was followed by a lovely grass meadow section on the run down towards Newtonmore. Great views of the surrounding mountains.I was just thinking that it was tailor made for mountain bikers and I hadn,t seen any yet when up popped a young local from Newtonmore on such a contraption.(Well ,younger than me anyway) We passed a few minutes chatting about this and that then he was off again in the opposite direction.I carried on heading for the gap in the woods that would eventually take me round the far side of Loch Gynach. 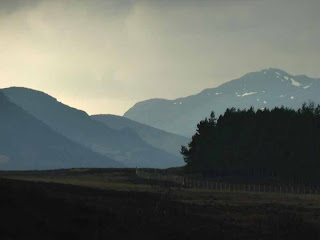 On the path looking up towards the MonadhLiath Mountains and the three Munro group of Carn Dearg,A Chailleach and Carn Sgulain above Newtonmore. (who,s  just found his long lost Munro book then)
I met the same guy on the way back down the loch while he was coming up and we had another short chat about bothies in the area. 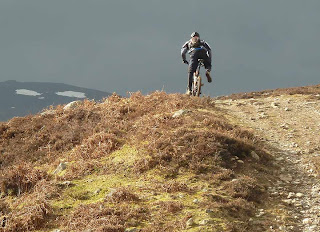 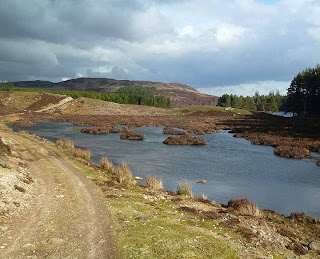 This is the fine path down the loch side.A walk or cycle I can thoroughly recommend.Those less confident  on a bike may have to walk very short sections of lumpy bumpy stuff but that's no hardship here with this scenery.
The track leads past the Big House and golf course then follows the minor tarmac road down the left hand side of this back to the car.A long enough day for me to start with.Just a slight limp developing after four plus hours but nothing major in the pain stakes.Alex was only 30 minutes behind me and had bagged his Corbett.
Happy we headed off to the hut  for our tea then a long meeting with our club mates and our good freind Major Swally who usually joined us on these occasions from his ship docked nearby.... the HMS Liquid Cargo. 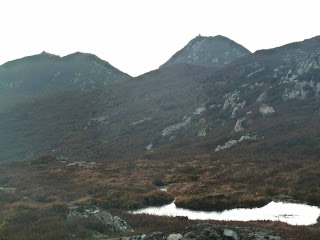 The rocky tops of Creag Bheag.I ended up bagging all five of these steep little sub peaks scattered over the summit ridge as they all had different views from them..
Posted by blueskyscotland at 17:58

I've just looked at this on the map and it looks like a nice wee walk for when the tops are covered in clag.

Hi Sheila.
Yeah its just perfect with great variety.Warm and sheltered on what was a very windy day elsewhere.
If you type in Glenmore Lodge.Creag Bheag Rock climbs. there are loads of pictures of the routes on it.

I looked up these crags and saw photos and reports of climbing there. It looks like a good training ground for Glenmore Lodge.

(When searching I came across one blog with a less optimistic blog title than yours: "Cloudy Skies and Rain". I much prefer your glass half-full version of "Blue Sky"! :-) )

Good to see that you are back out on the hill again Bob. Just in time for spring and all the good weather that's coming our way! I did Creag Bheag last autumn, a really nice wee hill with great views for little effort. Cheers. Neil

Cheers Neil.
Hopefully get to do some west coast island trips this year.

Great post Bob, I like the way you put so much detail into them.
And you've a great sense of humour, a cross between Chic Murray and Stanley Baxter I think.
I hope you're healing process has been successful, I'm sure Major Swally will have helped.

Cheers Jim.
I,m doing OK though i still cant kneel down properly yet without pain.A couple more weeks should fix that.
Hope your time back in Fife passed
OK and that it was as you remembered it.
Its one part of the world that hasn,t changed much though,still a lovely place.

Forgot to add I had to put that pest of a prove your not a robot twin word back up.I did leave it off for several days but was getting several dodgy
adverts and comments through the gap which I then had to hunt in back issues then delete.
A magnifying glass works every time for me when leaving comments though.
Typical they change the style and font of these words without asking anyone.

I have just discovered your blog and am thoroughly enjoying the posts. keep them coming...

You won't need to kneel down will you? Don't think Satan insists you kneel - unlike t'other one!

A great and amusing read - cheered me up when I'm knackered (early shifts - ugh!).
Carol.