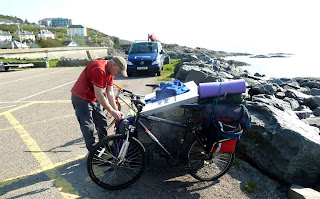 After a very cold wet start to Spring  that rare thing happened on the west coast  of Scotland.A much predicted week long heatwave with temperatures hitting 28 degrees Celsius (80 plus Fahrenheit) which was tipped to build day by day.Wall to wall sunshine except for the poor east coast which sometimes has its famous haar drift in created by the temperature difference between the deep,cold north sea offshore and the inland heat bringing summer sea mists that can roll inland many miles and affects the coast occasionally from Aberdeen down past Edinburgh.Same thing happens in San Francisco and other cold/ hot places around the world.
Knowing there would be a rush into the countryside at the weekend by the masses we formed a cunning plan and set off midweek for Knoydart.This is Alex packing his gear for the trip on the ferry.Its Wednesday afternoon and its sweltering.The large car park at Mallaig was already full up and we were lucky to get a space.The reason for the late start was to fit in with the ferry timetables.Four ferries run per day mid week.You have to book in advance as its a popular destination nowadays. 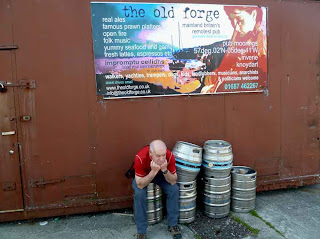 Any shade was welcome.This is Alex sitting under the Old Forge Pub sign in Mallaig harbour,in the Guinness book of records for being the UK,s remotest mainland pub and famous for its seafood. Knoydart itself is often billed  in quality newspaper colour supplements as one of the remotest corners of mainland Britain and Inverie as the isolated village with no road into it.
In reality though,with regular low cost airlines to Glasgow you can reach Inverie from London in a day.
Everyone else seemed to have the same cunning plan and Mallaig was busy with holiday makers. 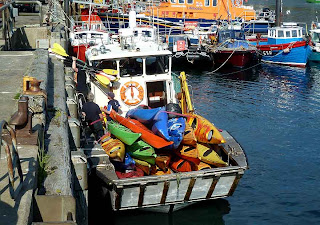 Our Landing Craft arrived stuffed with Sea Kayaks.This turned out to be an adventure company back from a trip.When they had unloaded we boarded with our bikes and gear and set off intending to return to Mallaig on Saturday night.Only two other folk,a couple, shared this ferry with us.Alex had already booked the trip both ways by phone.Its called the Sea Bridge this company and has a number of different sized ferries to cater for different cargo. 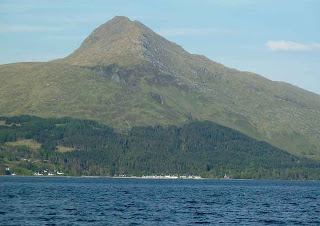 Its a lovely trip in on a calm day like this one and passes under the steep walls of Aonach Mor and Sgurr An Eilein Ghiubhais,This latter hill being particularly impressive seen from the campsite beach.We were very glad of the sea breeze.
The view in the photo above is  the village of Inverie sitting below Sgurr Coire Choinnichean,a steep impressive peak and one of Alex,s three Corbetts he was hoping to do on this trip.The others being Beinn Na Caillich and Beinn Bhuidhe. 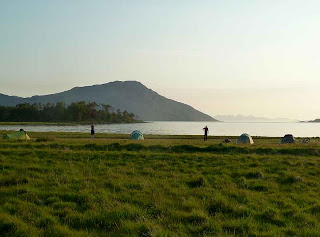 The campsite was in a nice location a ten minute walk from the village situated on a flat grassy plain beside a long beach of white sand.With our tents erected that made 17 in total dotted along the grass.
Nightfall came and we cycled along to the pub for a couple of cheeky pints and to get away from the midges which were noticeable but not too bad.It was really warm without any breeze so the heat was probably keeping them at bay.
The bar staff were mainly from New Zealand and Australia and Nat,a cheery guy from Queensland told us a great story about teenagers there catching  the big cane toads  then attaching empty beer cans to their legs with string before tossing them onto neighbours roofs to hop around all night annoying the hell out of the inhabitants living inside.
That made us laugh but when we got back to the tents after a pleasant evening with the amber liquid we soon found out that Inverie had its own version of cane toads in the shape of the resident peacock and a visiting orchestra of cuckoos. 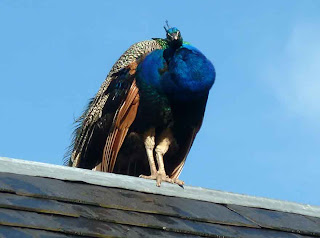 As soon as dusk descended this bold individual flew up onto a nearby roof  in the village and gave voice in its distinctive elegant scream.The cuckoos responded and  battle commenced for several hours each night.The cuckoos always won though as they never stopped.Cuck and oohing right though the night though I was always asleep long before then.Sleeping bags were not necessary inside the tents and lying on the carrymat without a stitch  on was  often enough over the next three nights.Seperate tents I might add. 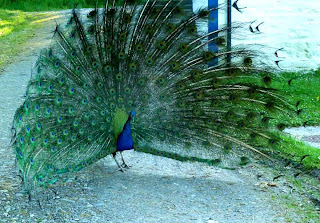 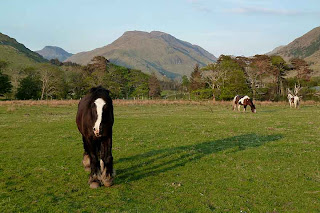 In the morning another great day dawned and we woke early,well before 7am with the sun hitting the tents.After an hour it was like being cooked in an oven inside so it was no problem getting up. 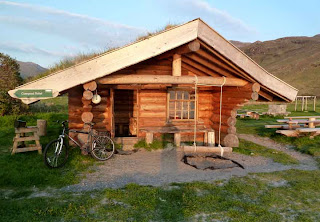 Alex had his three cups of coffee breakfast ritual in here,a log cabin similar to the more basic rain shelter on Rum while I prefered to dine in front of the tent eating my usual spaghetti ,beans and midge surprise.Alan and Beryl a couple of equal or slightly older age to ourselves got on well with Alex as they had a lot in common.Much talk of Corbetts, Grahams,Marilyns, Munros and long distance walks no doubt took place in this hut. Little motivational angels on both shoulders all three had.
This post could be subtitled " Driving A Driven Man" as he was determined to get his bag of three Corbetts done.Alex doesn,t normally like it too hot.And this was boil in a bag time.Alan and Beryl were even more motivated  than Alex if possible.A stifling hot windless day seemed not to bother them at all and Alan was Corbett and tick list driven too.The same hill As Alex today.Beinn Bhuidhe.
This was a long day....so I was told.It did not start well when we set off along the track on foot North,in the opposite direction from the hill we intended to climb then headed East parallel to the beast which seemed to grow in height and get even further away as we sank down onto the Inverie River track.It was hot.Airless.Still.And not even nine in the morning. 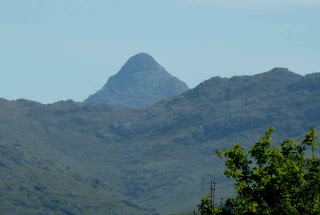 Sgurr Na Ciche peeping up seen from the Inverie river track.I have the usual  two little angels on each shoulder as well.Fortunately on stifling hot days like this one my motivational angel sometimes gets bullied and tied up by my cant be arsed angel.Today after an hour of sweaty walking and no nearer the base of the hill my cant be arsed angel won the day.He,s the more intelligent angel after all except when it come to advice like "Yes boy, take those two extra pints down your neck,you know it makes sense.  Go On , it wont hurt!" 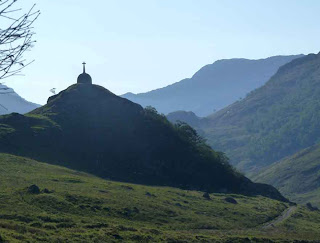 I also passed below this. A Monument !!!! .I was smitten and waved a happy goodbye to Corbett bound Alex. Alan And Beryl also came up to see this,a large impressive structure with a cool dark chamber inside  that could sleep one comfortably,two at a push.It is on estate land though.
At first I thought it was built to commemorate the seven men of Knoydart but sadly it turned out to have been erected by their adversary Lord Brocket as a tribute to his mother,father, wife and children.For that  highly interesting history see here This also has a picture link to the Knoydart Foundation and maps of the area....http://www.highlandclearances.co.uk/clearances/postclearances_knoydartseven.htm

After a look around Alan went off after Alex. Beryl headed up to the heights of the Mam Barrisdale pass and I visited Loch an Dubh Lochan , watched sand martins and wheatears flying around its shores then went back to the tent for my bike.It was time for plan B.
Cant be arsed angel rubbed his hands and jumped up and down on my shoulder laughing while motivational angel struggled  hard and cursed  him and me to no avail, his wee body well wrapped up in bondage...... ......................................
.....to be continued.....
Posted by blueskyscotland at 23:24

What a fabulous part of the country to be in during the recent good spell. Bit hot for climbing hills though! I guess that it's much busier since I was there on a work related visit in 2005. That was in brilliant weather as well and I managed to fit in a climb of Sgurr Coire Choinnichean by getting to Knoydart early. Not done the other two Corbetts though.

Great area Neil.
Sgurr C C is a fine hill.Although I like the sun it was just a bit too hot and sticky that week for charging up mountains every day.Well,for me anyway.