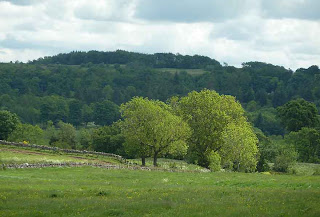 15 miles from Glasgow sits  an enchanted land which I can enter from time to time, but lovingly, sparingly,when dull mind needs a comfort hug in the form of a landscape fresh with lemons and song of skylark, at times sweet and dreamy yet also hard and edgy in the myriad little lives that have played out here in deep hollow, ridgeline, bog and vale.
It has had many names down through the years as have I but I just calls it now "The Greenhill Country" as that's what it is see...
It's not that big. Ten miles wide by twenty odd miles deep it measures ... but they be odd miles indeed that lie within its boundaries.For this is its secret see.. a secret not many people are aware of...  It has the powers of a "changeling." 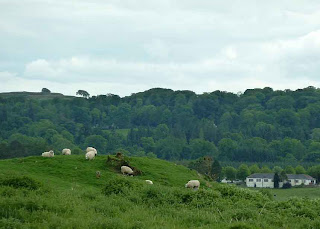 Now everybody in this world has heard of changelings but they always takes the form of a human see, usually a kid or youth snatched or swapped over and another left in its place like what happened to Angie,s young un some time ago.
But this is different altogether. An entire landscape that can shift its view round every corner and mimic somewhere else.
Maybe man will kill that off someday as they have the wild boar, the cave bear and the lynx that used to roam here, tasting the air with tongue and nose. This land used to stretch much further see.. an entire wooded kingdom of hills, dips and meadows stretching far out across the great plain.
'The Drumlin Vale.'
From the summit of one, a great table top dome, you could see close on 200 different small hilltops and valleys. I heard tell fertile slopes and farms appeared as they cut down the forests of this once great natural rolling maze. So unique in Scotland. So different. Around about then them Templars may have hunted game here. Someone certainly left behind a name on the slopes of a hill facing west on a far reaching viewpoint. Wood of the Knights. A castle once stood here by the cross.
This small roughest corner is all that,s left of that once wild, wide land after the houses and humans grew, spreading relentlessly like maggots on a corpse. So far however there's still this last glimpse left of a landscape that lures you in. An peaceful emptiness about the area that slowly works its magic then starts to creep under your skin.
Pack horses no longer have to follow a cunning system of paths over escarpments and hear their owners curse as they skirt them around bogs, delivering goods to scattered communities and farms,some found only by the wood smoke drifting from chimneys down in a hollow or up on a wooded ridge on windless days. 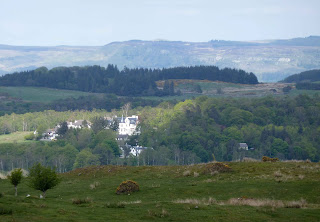 Before that ice and water formed this land.The great deep trench of the River Clyde giving a Grand Canyon look to the place. Like here above.
The cathedral town of Glasgow sits in a  wide bowl, its rim a surrounding  gauntlet of  higher hills. Ice and water have to reach the sea as that's nature's way.
Here, at this point, is where they found a weakness in the land.  Eating several deep fault lines clean through the lower, softer portions of the Kilpatrick Massif until it resembled a cockerel's crown hereabouts. My beautiful Ridge Lands. My Greenhill Country and all that remains of that great first realm of the Drumlin Vale. 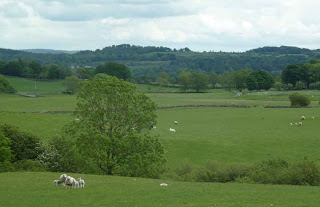 When I was old enough to climb a horse I travelled  here seeking warmth, protection, shelter and good fortune. I found a fair land where plum, pear and apple tree may grow wild out in the open.
Later, when called to depart for Middle England and the South, that large foreign realm of unknown bastards , haughty Lords and pagan wars beyond our borders I saw truth in its reflections.
Here was there.... and there was here. 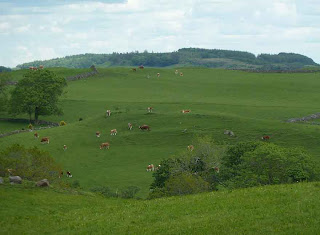 Many different lands I passed through, Some wild, some awash with rich pickings, mead and honey where you could simply lift your lunch off the bushes and trees. A softer southern land where the sun's strength increased the further towards the bottom you travelled. In some places battles were fought. Then peace returned.
It was then I started to realise just how strange my own Greenhill country was, A pretty oasis so out of step, stranded and almost overlooked in these harsher northern latitudes. How lucky the people of these lower kingdoms to the south were.
Why they could even grow grape in London. Something I seen with my own mouth and eager tongue.
During my adventures in the South I passed through the great rural landscapes of Devon, Dorset,Wessex, Bowland, then over the hump of the Southern Downs, before the Weald, Cot-Wold, Peak and Hammer.
And in each I saw a small mirror of my own fair Greenhill Country.
Some enchantment  whereby not only could my own sweet hills mimic a tiny different portion of  each landscape travelled through  but that they could actually complement in summer the most outstanding rural scenery that England had to offer and not be found wanting in any way except in size of acreage alone.Time after time a homeland view I knew well could match in with each of these widely scattered landscapes perfectly, running on and on until my poor mind was befuddled and captured like a deer in a fence trap where skillful men alter the sides constantly, moving in smaller or changing the view each time it looks away.
How could that be? How could such a small landscape possess that ability to mimic so many other lands so far away?
When I returned I reported my findings to the Lords of the Warm Valley but they dismissed it as a mere travellers tale.
But know this..This Greenhill Country is a changeling for sure. There I've had my say on the matter. 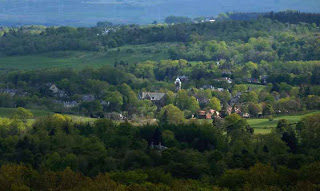 Quarriers village from the uplands above Balrossie.

http://www.crossroad.to/Excerpts/books/lilith.htm
I've added this book link  I've found to Lilith by George Macdonald as it has many other interesting links to writers ,poets and thinkers mostly unheard of today. Lilith is one of my favourite early books. It's about Adam.s first wife (before Eve )who is usually represented as a dark force. In this she is portrayed as a conflicted vampire princess who kills  her own daughter.
(What's not to like?)
Before you ask I,m not religious in any way.I just thought it was an amazing book when I  first read it around fourteen. .Macdonald has a strong claim to be the father of all fantasy novels and Lilith is reputed to be his darkest work. I just thought it was exciting and had a strange, dream like quality to it. Even today it still has some chapters of very powerful imagery.
Posted by blueskyscotland at 18:59

I enjoyed accompanying you around the Greenhill Country Bob.
Your words put me in mind of Sir Walter Scott.

Methinks I'm looking forward to the Greenhill Country of the second part.

You,ve been doing a bit of digging yourself I see.
I,ve never heard that line Jim but it fits.
I was aiming for the style of George Macdonald as I,ve had his books on my shelf since the 60,s
Phantastes and Lilith both use the concept of being able to step from one world into the next in an instant and the landscape becoming a character in its own right.
He,s almost forgotton now sadly but he was an Influence on both the Hobbit and the Lord of the Rings and deserves to be better known.
Just like I,d be willing to bet the six "Witch World" books by Andre Norton must have had some imput on Harry Potter,however slight.
You can be a famous person in your own lifetime then 100 years later no one has heard of you.
Such is life.

Another great post on an area I don't know too well as i suppose its 'too obvious' if you know what I mean! Having lived in the helensburgh area for a long time it kinda seemed on the doorstep although across the water. Must go and visit the area sometime as you have sold it well with your photos and information! keep up the good work!

That,s one of the things I like about it because no one but locals ever goes there.
Seeing as its yourself Hunter the bike run described is fantastic but if you be walking I,d go for the Knapps Loch, Glen Moss circuit
instead then a stroll around Quarrier,s village.I think it may still have a tea room open near the little bridge and the old fire station there(I,m not a tea room person myself)as there are few other places to park within it.Lovely village though not geared up for tourists in any way which is good.
Could walk from the Loch car parks.
A decription of that walk was posted a few months back.
Lyle hill above Greenock is good as well for high level views over the Firth of Clyde.You can also drive up Tower Hill above Gourock.

Great posts, enjoyed them.
I live in 'Poor Glasgow' and walk these areas on a weekly basis, there are plenty country track and off track walks in the area.

Cheers Bobby.
You seem to know the area very well.The small upland ridge around Jocks Craig is fantastic for views.
A great landscape to have right on our doorstep.