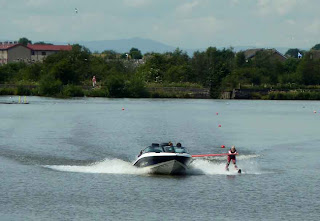 Lucky dip days can sometimes be the best ones.Looking at a large scale map for somewhere new to go my eyes fell on Dunfermline. I could cycle from here around a part of Fife I didn't know very well.Parking was obvious from the OS map Falkirk and West Lothian Sheet 65. Townhill Loch Country park and Scottish water ski centre. I,d never been there either.  Off I went. It,s not that easy to find without a sat nav but I like a challenge.Half an hour of Dunfermline back streets and a petrol's worth of sat nav later I arrived at my destination , road map in hand. Who needs these new fangled toys when you have a roll down window, a shouty questioning voice and pedestrians not yet knocked over.
Part of the problem was that my OS map was old and bore no resemblance to the actual street layout.Dunfermline is one of the fastest growing towns in Scotland and the boundaries and minor roads I was following had been swallowed up by new build posh estates. And as any driver knows new build posh estates love endless roundabouts and cul de sacs.At this rate it will be a city soon. 22 cul de sacs later I took this picture above. 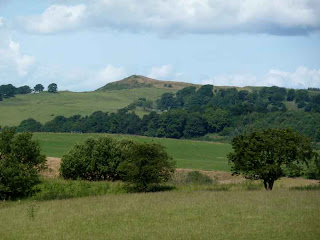 Off I went on my trusty bike. Although this is one of the most Industrial and urban areas of Fife with a network of small towns and villages I knew it would have bags of history and great scenery as well.It is Fife after all ,one of the oldest settled landscapes in Scotland.My first port of call was to visit the Roscobie hills via the bowershall minor road then the quiet B914. Although not high they have character and are Ideal for exploring on a bike. 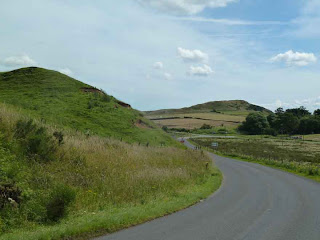 Next up came the Saline hills past the Knockhill racing circuit, then hill end then Saline itself.I met a few local bikers here.It was a hot day but they were still wearing their leathers.I was glad I was just in a tee shirt and shorts. 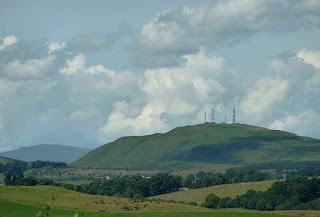 Came back via the same B914 past  Temple and Steelend.Great names around here. A lot are coal mining or heavy industry related.
Next up was Kelty and Loch  Ore. I,d been here before but thought I take another wee tour round its shores.I met a 20 something girl here last year on a bench who had the most incredible and incendiary tattoos I,ve ever seen. Most were highly pornographic and explicit but very artistic as well.Almost visionary in design.A real work of art as well as an eyeopener. She looked liked she could live up to the wrapping paper billing though and I was keen to peel further :)
Call me an old pervert but on a hot sticky day unobtainable goals like these make the long miles feel shorter.I like Fife!
I,d also given my bum a treat with some jelly under it.I,d even got Alex some in case he fancied trying it too next time he was out.
Two weeks ago Lidl had a bike sale on and I,d bought two gel filled saddle slip ons.
By god I wish I,d got one years ago. No more dead ass at the end of a long ride.It ,s like sitting on a bouncy panda now! 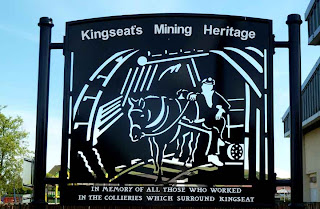 Next up was Cowdenbeath. This is a place I,d always wondered about but had never visited before. I just imagined it as an ex mining town like so many others here but I was slightly disappointed by it. A nice enough place to live but too pretty and posh for my tastes. On a bike ride I like visiting rough places as well as beautiful scenery as a contrast. The wilder the better.  Cowdenbeath was too nice and ordinary for my tastes.
"Where,s the rough quarter herabouts?" I shouted to the few males walking about from my bike."Where,s the dodgy bits hiding?"
I got a few strange looks and it was only after the forth attempt I realised the zip on my trousers had worked its way down due to all the uphill effort thus far and my flesh coloured boxers were on show to the world.At least I think it was my boxers.
I liked Kingseat  better.This wasn't rough ,its a lovely wee village but it did have history boards on the main street informing visitors that the place was founded on rich seams of coal.There used to be a range of pits close by.Now its open cast mines nearby that employ the locals still involved in the industry which requires far fewer workers although its probably much safer.
I also found out Kingseat gets its name from the the tradition that a large stone stood here on this ridge between  Scone Palace and Dunfermline.There was only a small farmstead here at that time. It was fashioned into a great seat and the Kings of Scotland used to rest here sometimes before descending into Dunfermline Itself. Amazing the things you find out on a bike ride. Yet another thing I,d never heard of. 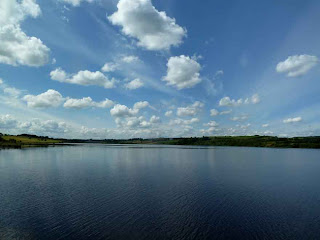 Loch Fitty came next. A bigger loch than it looks on the map and a popular fishing spot for local anglers.Never been here either.
Next came Crossgates a small village on a crossroads with a nice mural inshot again giving something of the history of the area.
The B916 came next which led me back into the bottom of Dunfermline.So far, due to the greater population in this central part of Fife, the roads had held more traffic than I,m used sharing the tarmac with but I reasoned  if I stuck to the back streets and wider pavements cutting up through the heart of  Dunfermline it would be no problem. 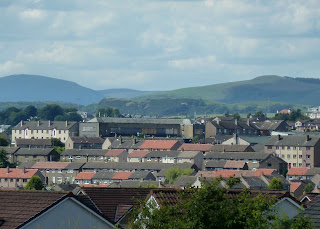 Dunfermline is a town with great history and character. Its also a really hilly son of a bitch on a bike.Especially at the end of an up and down cycle ride through rollercoaster terrain. They don't show contour lines under buildings on  maps but there must be a lot of them here. 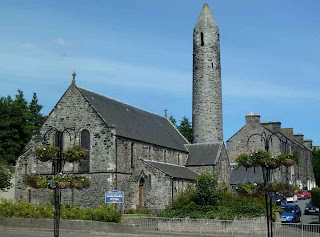 Passed this unusual style of church first then a climb up on tiring legs to the Abbey. I could reach this through the beautiful grounds of Pittencrieff Park,a gift to the town from the Industrialist Andrew Carnegie who grew up here when it was an off limits private estate he always wanted to play in as a boy.Its a stunning park as its sits on a high ridge with extensive views over towards the Pentlands.Everything sits on a high ridge here.Carnegie is sometimes described as the second richest man in history but in his later years he did his best to give it all away to good causes.
http://en.wikipedia.org/wiki/Andrew_Carnegie 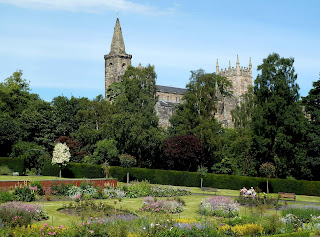 The Abbey and gardens in the formal part of the park.Just here where the trees are is a deep ravine which is also part of the park with walks and trails along its base.Its one of the best parks in the UK and a real asset to Dunfermline and its citizens.The tower has" King Robert The Bruce " one word carved around each of its four sides.Just past this comes the main shopping street and a chance to walk and stretch my legs. 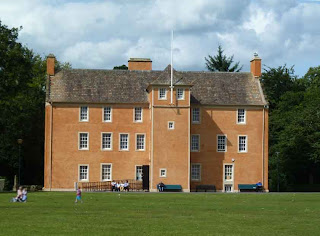 Carnegie Museum. Pittencrieff Park.There used to be a smashing little zoo  near here years ago til vandals ruined it.The modern namby pamby world at work.Never would have happened in the days when you could hack off children's hands for bad behaviour and just get a ticking off for an over enthusiastic approach to discipline.They can piss,vomit ,crap and throw glass in the paddling pool now and you,ve just got to pat them on the head.
I still keep the scythe sharpened though in case the good old days ever return. 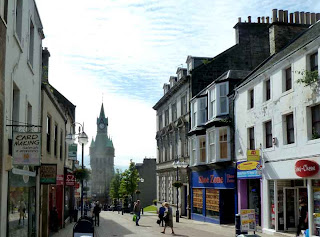 Dunfermline high street is one of the few still busy with shoppers although even here To Let signs are creeping in.I cant see them ever reviving the fortunes of our high streets in our towns and cities as long as major superstore chains are around. Its too easy to get all your stuff in one go there.Very few people have the time or inclination now to travel from shop to shop like they used to do.
"Why is it called Townhill Daddy?"
"Because its the highest hill in a very hilly town son" 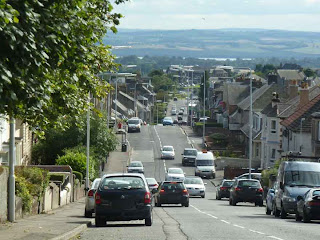 I must have been too dumb to have asked questions like these as a boy. Otherwise I would have known I was in for a monster climb back up to the car.This is not even the top of the hill. Happy days. 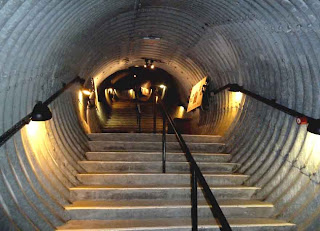 Highlight of the trip was finding this. The tunnel leading down to St Margaret,s Cave. In her lifetime she was an exiled princess ,her family having a legitmate claim to the throne of England. Unfortuately she came of age just as William the Conquerer got his hands on it and the Normans were not known for letting go of assests easily once aquired.She arrived in Scotland instead.
http://en.wikipedia.org/wiki/Saint_Margaret_of_Scotland
Here after a while she married  King  Malcolm and became Queen Margaret of Scotland. She was raised a devout catholic and reputedly did many acts of penance and good works down here,tending the sick and needy underneath a large car park.Presumably admission was free of charge then as well. North and South Queensferry gets its name from her as she  established a free crossing  there allowing poorer pilgrams to visit St Andrews and other holy places on route.
Cave was OK. Loved the tunnel down to it and another chunk of history I knew very little about until now.A lucky dip day.Cant beat them sometimes for surprises.
Posted by blueskyscotland at 18:46

I've never tried a gel seat on my bikes but mine are pretty much old-type sprung seats to my bum doesn't get too numb. I don't do the mileage you do though. I always wear a t-shirt to cycle too - I can't abide tight clothing.

You're right that you certainly do see more on a bike. Me and Richard had been to Glen Affric/Cannich quite a few times but it wasn't till we hired bikes last time that we found an old well and monument on the road in. We'd never have seen it from the car!

Hi Carol.Yeah, its worth a visit as Pittencrieff Park is Stunning in itself plus all the old buildings and history.
Just read in the papers today The naked rambler was arrested in Townhill Country park walking past the children,s section.
There is something wrong with that guy,s head as he could easily walk across Britain naked if he wanted but he picks busy places to cause the most offence.He seems to want to spend the rest of his life in prison at the taxpayers expense.

Nice to see you in the Kingdom again Bob. Dunfermline's a bit of a mystery to me, but my mum was convinced we were related to Andrew Carnegie.

Cowdenbeath and Kelty I remember though. Back in the 50's the area was the hub of the Fife coalfields.

20 something Fife lassies with tattoos, I'd be careful there !

I'd forgotten all about Queen Margaret. I wrote an essay on her for an English exam. It must be an age thing.
Great post sir.

Always like going to Fife Jim.Dont think I,ve ever had a bad day there yet.
(hairy wood,s best,says he touching his head)