A phone call from Alex, who is still keen to bag his remaining Corbetts when he gets an opportunity, saw us head up past Pitlochry and Blair Atholl to the nearby hamlet of Old Blair where there is a large car park hidden in the woods. Nowadays, this is one of the lesser known gateways into the Cairngorms National Park which covers a larger area than most people think, including me. Going by the Park Map I think it's increased in size to include the Tilt and Atholl Ranges now using the A9 as a convenient boundary marker. Certainly it's not this size on my old AA road map Atlas.2008 edition which shows the boundary ending at An Sgarsoch, 1006 metres, Carn an Fhidhleir 994metres and the headwaters of the River Feshie and River Dee unless this is an error. My Pitlochry OS map seems to have disappeared from my collection. I never pay too much attention to these boundary changes anyway. It's only ever a line drawn on paper to me. These two Munros are so remote and featureless I have no memory whatsoever of bagging them although I do remember walking past the 'Tarf Hotel' to get there. A long trek in. Be bikes now I suppose.
http://cairngorms.co.uk/the-park/
Glen Tilt, up which we were heading, lies on the southern boundaries of this vast area of high rolling uplands, grassy summits and tundra like wastes, at least on the highest Munros over 1000 metres in height. 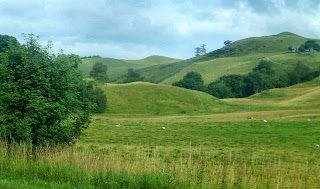 Some of this high ground can be a bit on the monotonous side in certain areas for a keen amateur photographer looking for variety, soft warmth and texture in landscapes but the area around Blair Atholl, Pitlochry and Glen Tilt is full of beauty and colour with the subtle shades of autumn just starting to creep in on a warm, end of summers day, like this one. 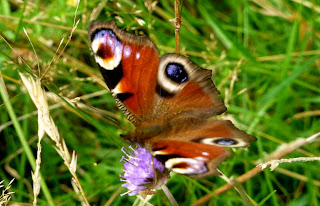 Plenty of wildlife to observe at lower levels and a very scenic glen to follow in Glen Tilt. A Peacock Butterfly feeding. 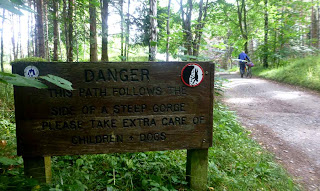 As a good land rover track snakes into these hills following the left (west) bank of the River Tilt we decided to use the bikes to cut down on the walking. It's around  23/24 kilometres round trip to do this Corbett and it's one of the higher ones, just 40 odd feet short of the magic 914 metres, 3000 foot, Munro height. About a 7 hour day, taking it fairly easy at a relaxed pace. The gorge at this point is a long way down though not quite the rocky chasm depicted on the board. Alex is walking on this early stage because an estate land rover has just past and he likes a talk with the locals. Although you cant tell from the photo it is also slightly uphill, hence the footwork. 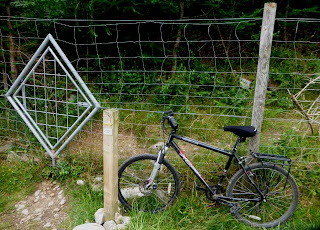 After a few useful kilometres on the bike a track on the left is followed over a stone bridge then this diamond shaped hobbit hole in a deer fence is entered. We left the bikes chained up here. Note the super soft comfy slip on gel saddle. What a difference this makes on any bike run. 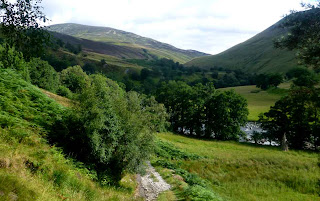 A side tributary is followed with the hill now almost in sight. Needless to say, being a Corbett, we never saw any other hill walkers once away from the car park area. 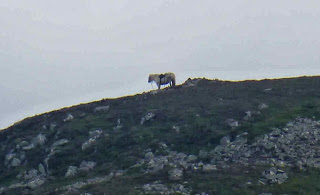 We did see this however. At first we thought it was a polar bear on an adjoining summit as it was too big to be a lone sheep or dog. Viewed through the camera zoom however it turned out to be the stalker and his pony out tracking the movements of the deer wandering the hills. This is the heartland  of Scotland's large game estates, where rich clients pay to shoot deer, grouse, pheasants, and other unlucky forms of life roaming the landscape. I prefer to pick my food up from the supermarket personally and open my wallet very carefully each time to let only a trickle of money slip out. 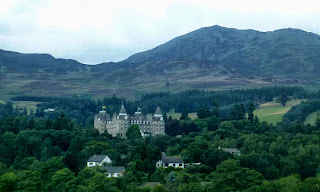 For that reason I'm never likely to trouble this place with my presence even if I hit the lottery millions jackpot.http://www.visitscotland.com/info/accommodation/atholl-palace-hotel-p189071 Mind you it is only £100 pounds a night for a single room here. That's not bad value nowadays when its £30 quid to stay in a motor inn. I'm a tenner a night man myself and I even grudge that these days :0) This hotel is in nearby Pitlochry by the way. It's not encountered on the walk in. 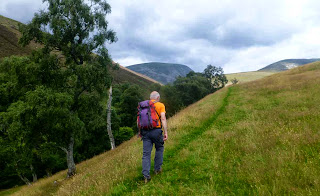 Back to the hill. This is the kind of grassy path that used to adorn most of the outlying Munros 20 to 30 years ago. A decent sized path for a Corbett when most are still fairly trackless ascents but the reason it's here is that it leads to an ancient stone bridge over the stream, a hundred plus years old judging by the stonework on the arch. The path peters out past that and it's back to the usual weaving game trails of deer and sheep contouring the hillsides. If you are very lucky one actually meanders in the direction you wish to travel. 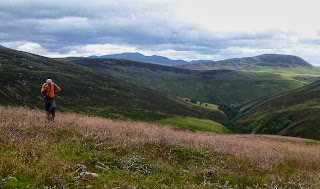 One of Alex scratching off the midges and numerous flies enjoying the presence of a rare human to bite. The wilds of the Atholl ridges behind. 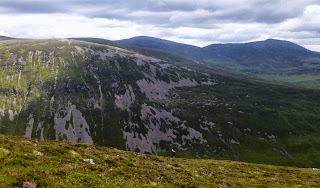 Getting nearer the summit now and the views are opening up over the Tilt and Tarf water uplands. 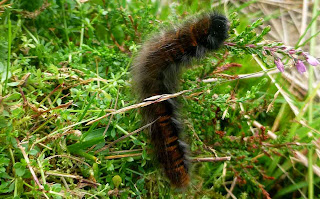 A fox moth caterpillar spotted on the way down. 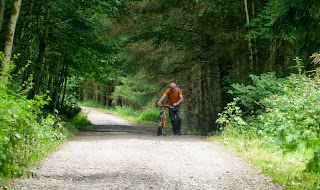 It wouldn't be an Alex mountain bike post without a photo of him walking up a slight gradient on the long road back to the car. Anyone who says doing Corbetts this way is cheating, rest assured.... the way Alex bags them by bike its really not :)
A great day out which I enjoyed far more than I thought I would at the start. I think the Corbett bagger enjoyed himself too.
Stumbled on this list of mountain groups for those that like the ticking and measuring of all things outdoors.
http://en.wikipedia.org/wiki/Lists_of_mountains_and_hills_in_the_British_Isles
Sadly I've heard of most of these sub groups and have done a fair few on each list but so far the addiction factor hasn't taken hold. Long may that continue.

Looks like you got a good day Bob, still you'll get to enjoy many a misty one in the near future.
Talking of game reminds me of an occasion my older cousins invited me along to one of their poaching escapades.........we ended up getting chased by a tractor, but enjoyed pheasant that night.I was fourteen and after that i stuck to guddling trout.

Love the clarity of the Peacock butterfly.

I prefer when you get the misty ones Jim:) I like good clear conditions on the hills. Butterfly could have been clearer. My focus on the camera is not working as well as it should for closely detailed images which is a real bugger at times. Took five snaps of it and the other four turned out blurred.

That's the same as me then, what you've said about whether Alex is cheating using a bike. If I'm on a hill day, I make no attempt to cycle up anything which makes me even slightly out of breath as I think the hill itself is enough energy expenditure for the day! ;-)

Wish you'd given me a shout for that one - I'm dying to do it. I love Glen Tilt - Scotland's very own Rift Valley :-)

Didn't think you were into doing Corbetts Carol. I just go where Alex points me regarding them. I even had to ask him what it was called before I posted the photographs as I couldn't remember what I'd actually been up:)
Still no sign of my OS map for that area alas.

I'm doing some Corbetts but only the ones I fancy - that was one of the ones! ;-)
Carol.