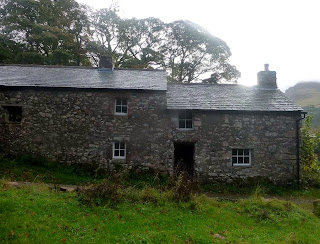 Lake District Weekend and the first winter meet for our club saw a team of us heading down to the English Lakes for two days of hill walking and climbing, weather permitting of course. It didn't look promising on the way down as we ran into several showers of rain only to find our destination of Ennerdale buried under cloud with none of the higher peaks showing. This is Gillerthwaite Barn next to the youth hostel which was our accommodation. Electric Lights, wood burning stove, bring own pots, gas stoves and carry mats. £10:50 a night. Sleeps 14.
It was the first time many of us had visited Ennerdale which lies on the western edge of the Lake District and was noticeably quieter than the tourist honeypots of the central and eastern lakes around Keswick and Ambleside. Mind you there is not much in Ennerdale except forest and hills so it's mainly for the dedicated outdoor lover. 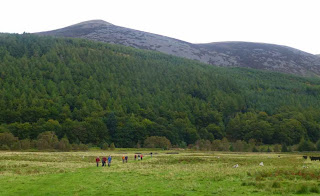 In the morning we couldn't believe our luck as it turned out fine so we set off for the long ridge of Caw Fell, Haycock, Steeple, Red Pike, then Pillar and Pillar Rock. Six Wainwrights bagged in a day according to Alex, who seems to know all about these things. 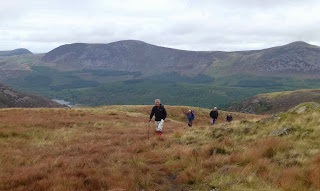 Getting a bit higher. View back towards Great Borne and Starling Dodd. We did have three girls in our group but they had marched ahead by this point while the old duffers brought up the rear. 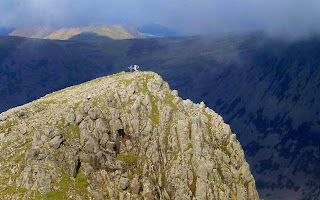 Caw Fell and Haycock kept a blanket of cloud around their summits but the sun came out and the mists parted for the rest of the peaks. A few of us made the extra effort to go out onto the rocky top on Steeple. The team split up at this point with only Alex and I bagging the outlier Red Pike which had amazing spirals of mist churning around the summit. 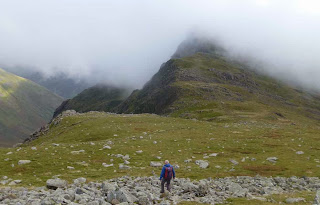 Cant really get an impression with a static picture but it was a boiling caldron effect. 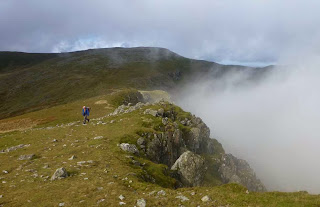 On the clagged in summit a large raven soared straight towards us out the mist, tempted in by the smell of my blueberry muffins.

Heavy tail brake manoeuvring going on here to come to a halt a few metres away. I gave it some leftovers. 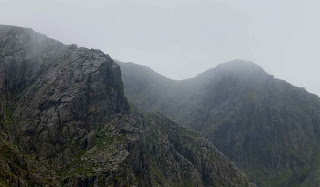 Everyone was surprised by how much exposed rock lay on the spine of this ridge calling for mild scrambling off  the summit of Pillar itself. At this point folk compared it to the easier parts of the Skye ridge and the rock in places did look like gabbro. Rough and sandpaper like on the fingers but maybe it was just badly eroded andesite. Been a long time since I've been on the Skye ridge to compare it, finger wise.
Pillar Rock is the only summit in the Lakes where rock climbing or at least serious scrambling is involved to reach it. We made it just in time to see two of our younger members, Neil and Dave, fight their way up New West Climb, a 100 metre ( 330 feet) 4 pitch Diff+ which starts high on the face of Pillar rock itself.  Not bad going rock climbing in October on a high mountain route as it was damp cold and windy up here. You never climb at your best in these conditions, wrapped up in several layers of clothing like the Michelin Man with frozen fingers, so well done to them for even attempting it. They were the only rock climbers to be seen at this height on that day. 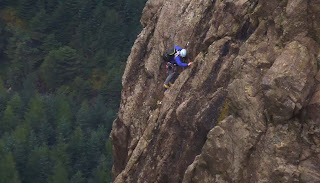 I think this is Neil leading one of the middle pitches high above the forest. Below, showing the scale of the route. 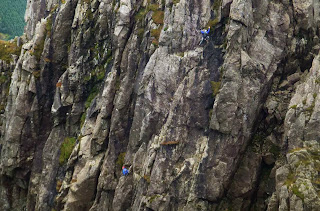 Another from the same angle as we veteran club photographers had a good seat watching the progress from a ledge above the route having scrambled down to view them. Once upon a time Alex and I thought nothing of doing this sort of nonsense and I even remember us rock climbing during an early Easter break with various mountaineering clubs in unexpected snow falls, (Arran. Twice!), heavy drizzle, (Grooved arête on Tryfan. Better grip than expected considering the water running down it.) and blinding hail (A route next to Spiral Stairs. Grim!) Maybe that's why I packed in rock climbing in 1997 and haven't been back on vertical walls since. Long may that continue as I don't have the bottle, enthusiasm or strength now for big wall adventures of that kind. 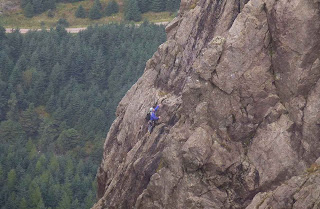 Alex still has a decent head for heights though and was happy sitting on the edge of the abyss for lunch dangling his boots over the edge. You can just see the climbers nearing the top of the route in this photo. 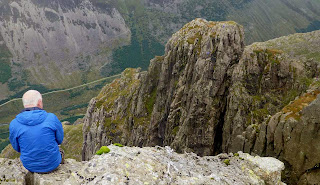 And one of the infamous Jordan Gap between High Man and Pisgah. 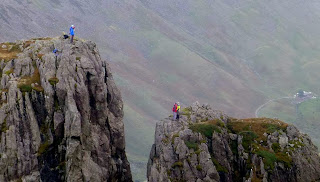 You can just make out Black Sail Hut Below. Bit of a granny stopper this notorious deep cleft. 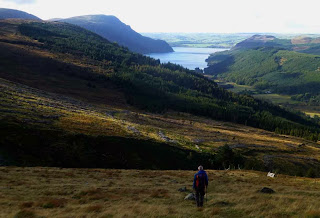 A long day out and a long walk back to the hut. Epic mountains though.
Posted by blueskyscotland at 17:41

Must get myself down to the Lake District soon. I avoid it during the tourist season but it looks as though it could be good in the November to February season. I've done a few of the hills there but most remain on my "to do" list. Looking forward to reading the next instalment of your trip!

Hi Neil.
I love it down there. The mountains are compact and impressive with lush dales, beautiful pubs and villages; the folk are normally friendly despite tourist saturation every summer and its got a character all its own.
It is quieter in winter as it's only the dedicated folk out then. More chance of rain though.

To Neil,
Ennerdale, apart from the flow of coast-to-coast walkers (who are easily avoided) is pretty quiet most of the year except for the carpark at Bowness Knotts. The hills on the south side of the valley are very quiet indeed.

To Bob,
Love those climbing photos - they're superb. Really clear and really show what's involved. I keep having vague aspirations to doing a bit of rock-climbing but don't think I'd ever be up to what they're doing there. I'll have to stick to small single pitch I think!

Can't believe not everyone went and did Steeple - the arete across to it is very appealing and the peak is great. If you want another route up it, the long ridge running up Steeple from the valley is quite nice too...
Carol.

Hi Carol,
I started off scrambling then worked up to single pitch easy routes. Ended on big walls until I got too old for it. I think most people work up to the longer routes
as some of them can be intimidating with a lot of fresh air beneath your feet.

I haven't been that far west since since 1964. Nothing quite as strenuous for me Bob, I only managed Catbells this trip. (So did dozens of others on the day).
You mentioned ravens. Lake district raven's aerobatics always seem more spectacular than Scottish ones, I wonder why ?
I don't know about it being much quieter in the winter though. When the kids were small we'd hardly see a soul on a day trip in October. I couldn't believe it when the restaurant in Threlked's pub got to an almost full point.
Some spectacular views Bob, you guys are certainly intrepid. "To boldly go" Captain Kirk.

Hi Jim,
Just a guess but the ravens in the Lakes are certainly less wary of people, probably because they see them as a convenient source of food on every summit. Our ravens up here probably have a harder,harsher lifestyle with less energy to play games as they need to devote most of their time to hunt for food.

Cheers Julie. I try my best.