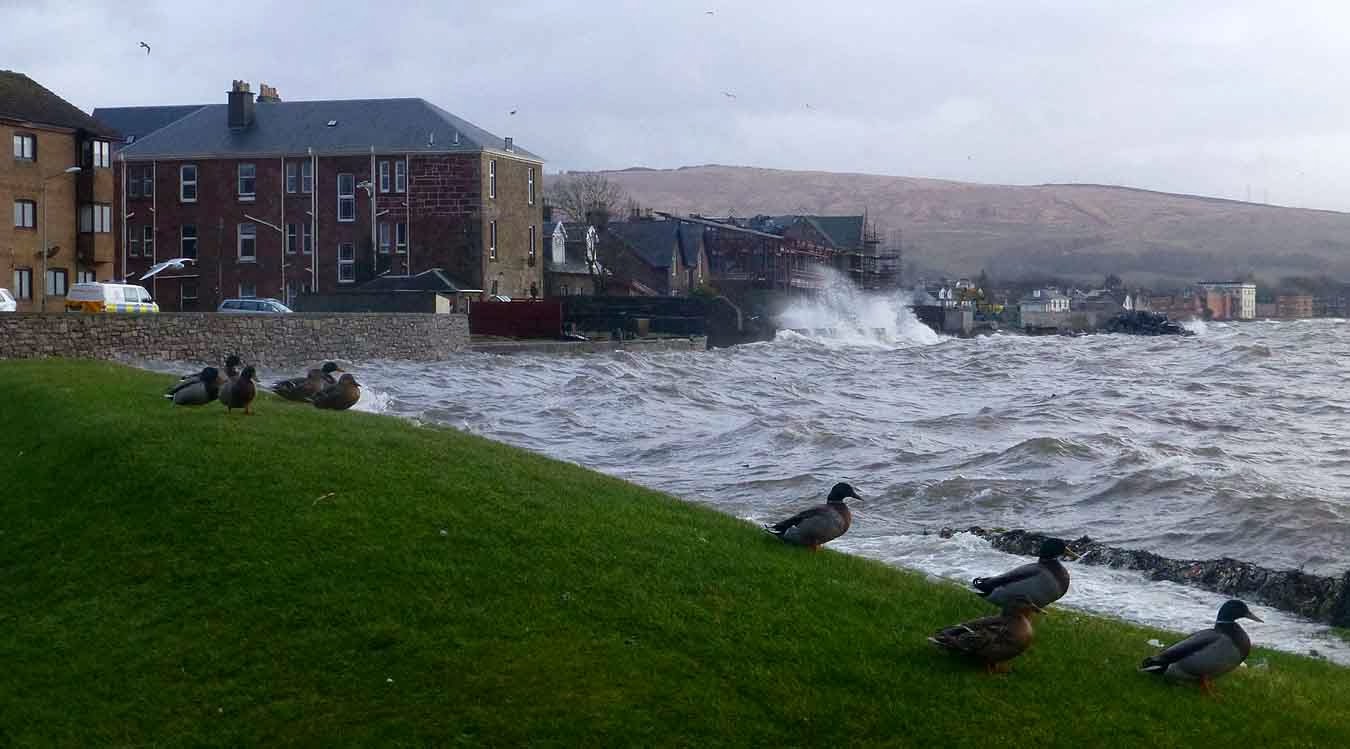 Ducks sitting out the storm at Helensburgh.
Although Britain has been battered by strong winds and powerful waves for about a month now I sat out going down to the coast for photographs as my usual top spots of Saltcoats, Adrossan, and Ayr featured on every news report and I'd already posted several stormy day walks in these locations. When I heard on the weather report however that high tides and strong winds were converging together on the west coast of Scotland, driven in by the Jet Stream and fed by the energy created by the Polar Vortex centred over the USA and Canada. I decided a trip down to the coast was long overdue. Apart from anything else I,d been stuck indoors all week and wanted a bit of fresh air and exercise at the seafront. I also remembered that some of the houses in Helensbugh were very close to the shore, protected by a large seawall. Normally Helensburgh is a fairly sheltered spot as it sits deep within the upper reaches of the Firth of Clyde well away from the Atlantic ocean's crashing waves.
After consulting the tide times however a 4 metre high tide was predicted to arrive up the Firth around 3:40 pm  and I thought that might be funnelled  into a Severn Bore type surge by the time it reached the confines of the Upper Clyde Estuary.http://www.thesevernbore.co.uk/. Good pictures of that famous occurrence here. 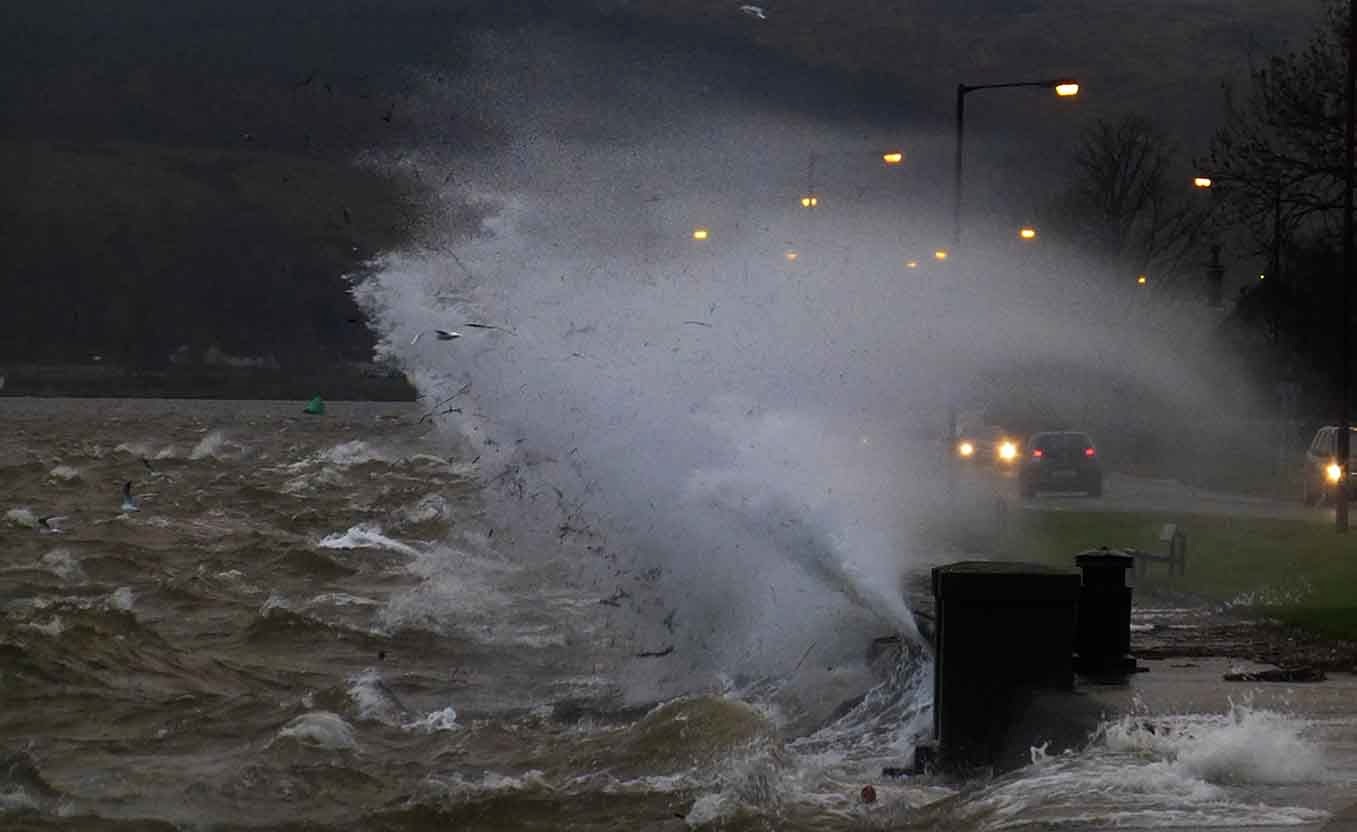 It wasn't quite like that but a stroll along the Helensburgh seafront with the gusts approaching 60 miles an hour was fairly bracing. Amazingly I didn't get wet as it was a dry storm with no rain and that's pretty unusual as it's normally peeing down as well during these events. Not even a drop of spray touched my jacket. There seemed to be a lot of seaweed, wood and even a few head sized boulders mixed in with the waves crashing ashore so I used common sense taking these pictures. It's fairly obvious from the abundance of seawater on land where to stand and where not to stand taking pictures on these occasions 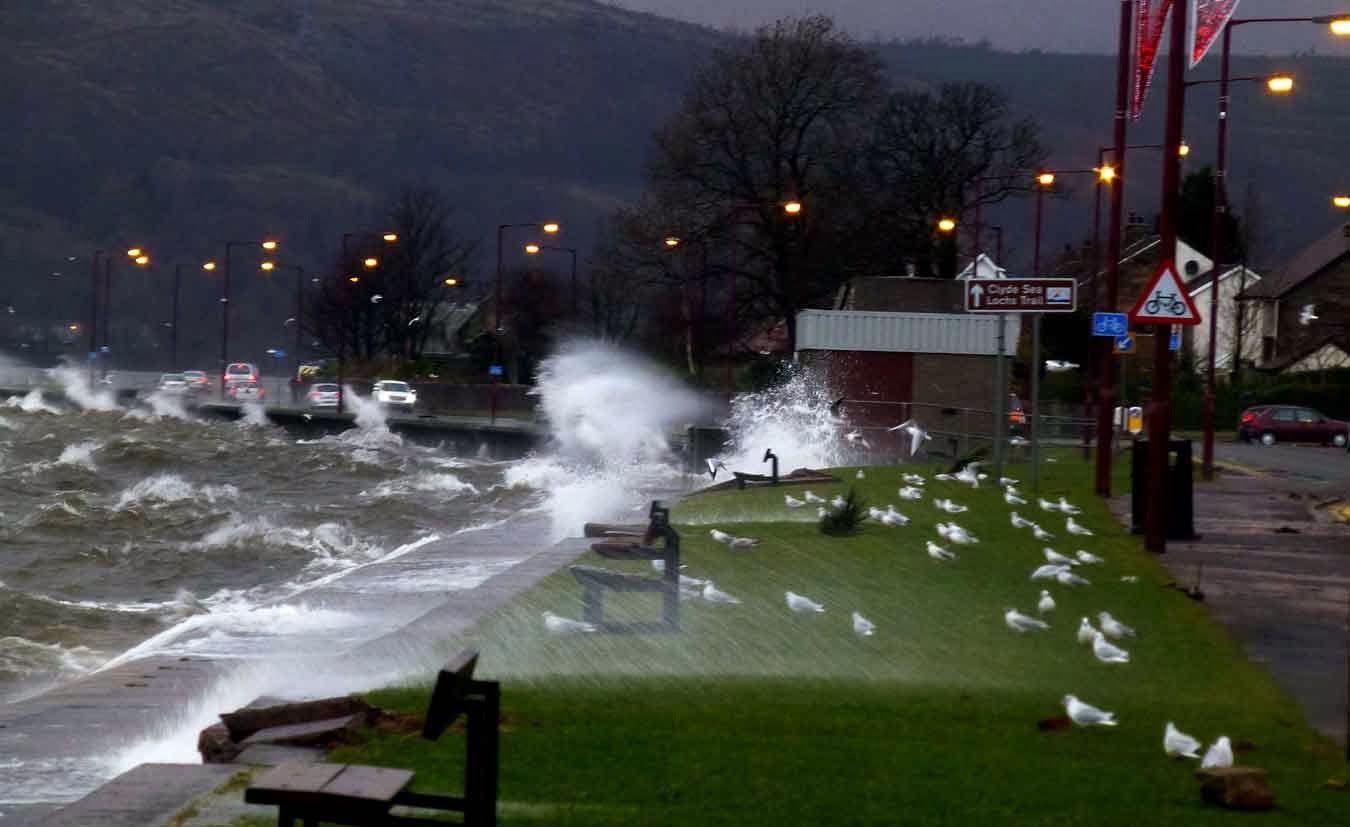 The Clyde Coast Sea Lochs Trail would be an adventurous drive in these conditions but the spray wouldn't do the cars any good. Sea water and mechanical engineering never mix well. Note the large boulder tossed onto the grass in this picture. It's worth bearing in mind standing next to any wild shoreline that a mouthful of spray might not the only thing flung ashore by the power of nature. The seagulls here already know that and are patiently lining up in wait for any sea creatures or worms that get tossed ashore which will then be pounced upon. 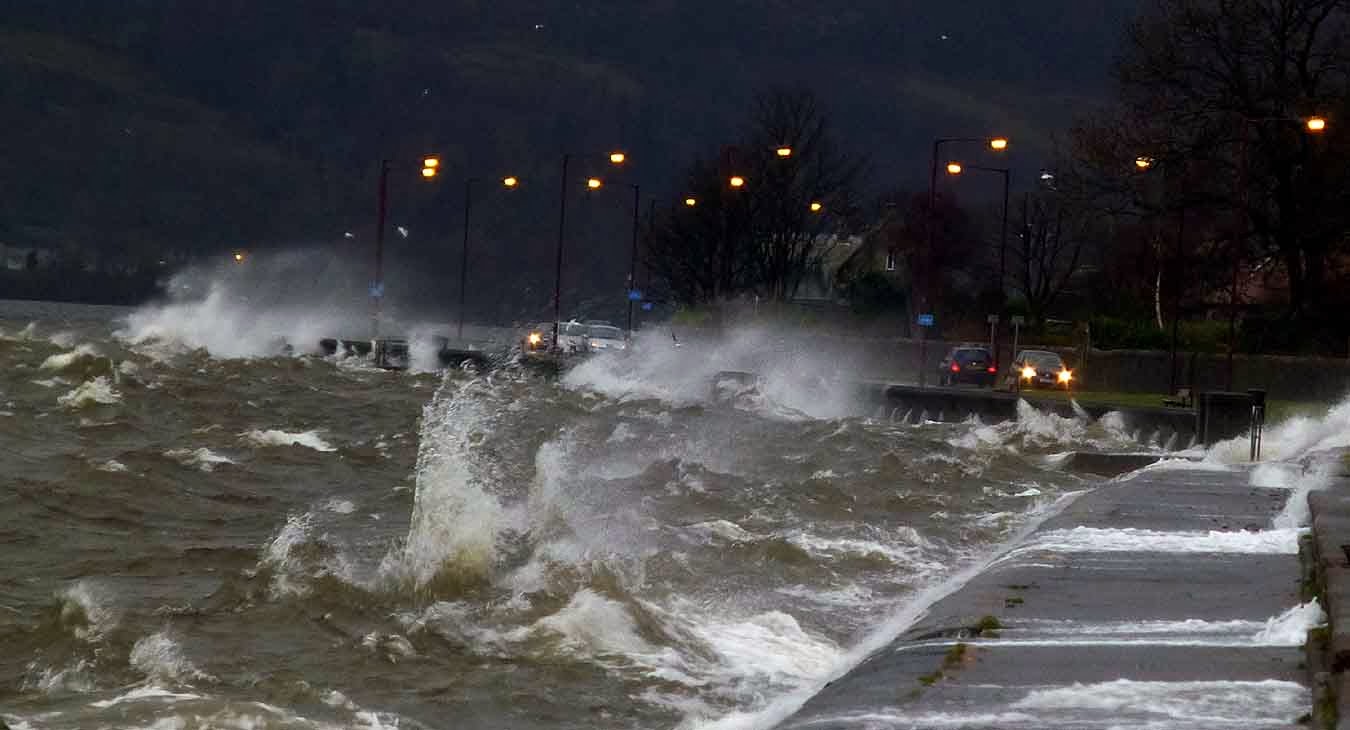 Heading up around the corner towards Rhu the wind was even fiercer and there seemed to be as much water on land as in the loch. It was full high tide by this point as I'd had my lunch first and departed the house at 2:00 pm, sauntering along the A 82 to catch it at its peak. Keeping dry at this point walking so close to the shore was tricky but good fun to attempt. 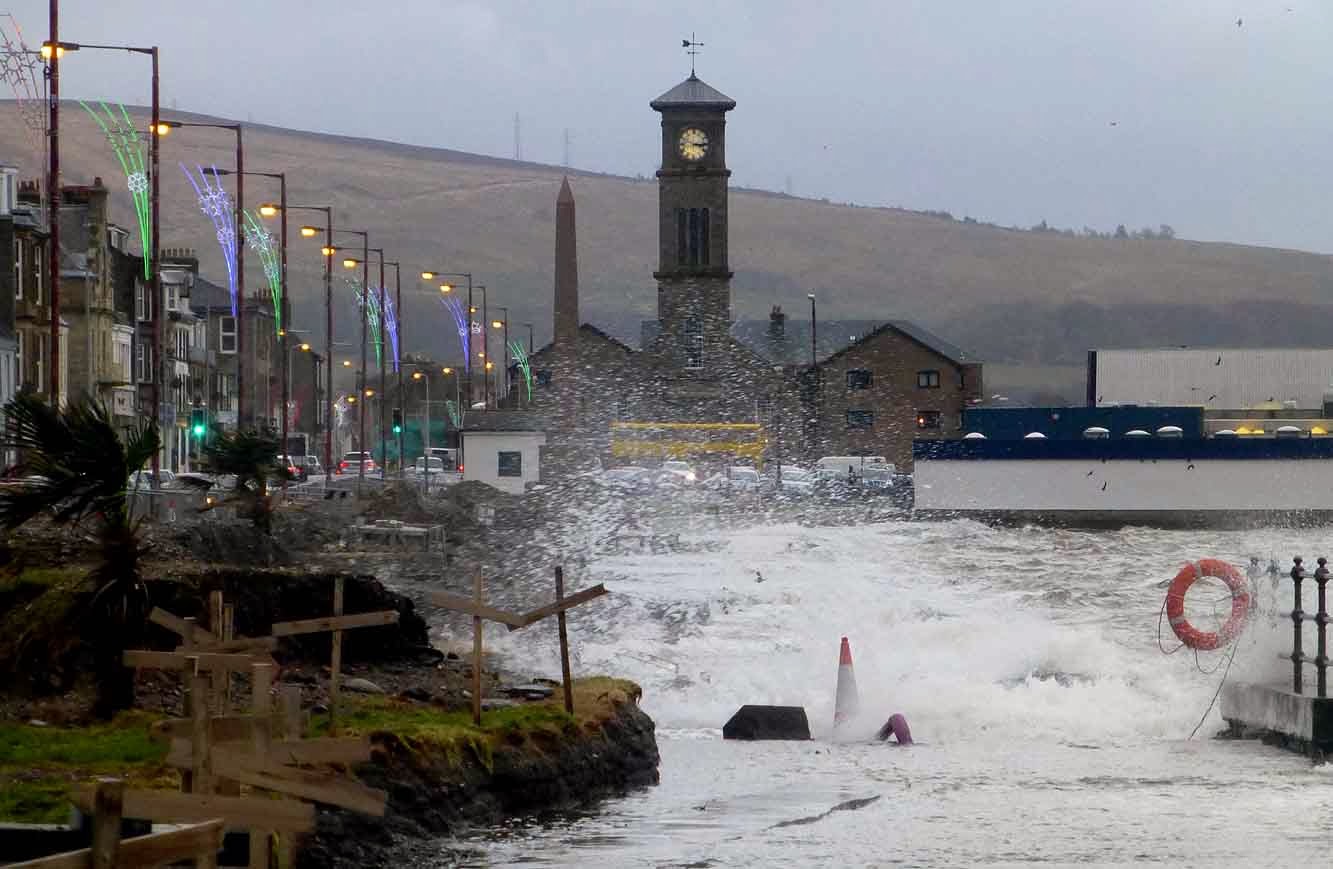 The sea front has taking a pounding over successive days of high tides and strong winds and the poor palm trees here looked a bit waterlogged and subdued, what's left of them. Hope they survive that extra helping of salt. Looking at several signboards in the town the seafront promenade was about to undergo an extensive makeover to bring it up to modern standards and tastes so maybe it's just as well this storm hit the esplanade now before the work was completed. 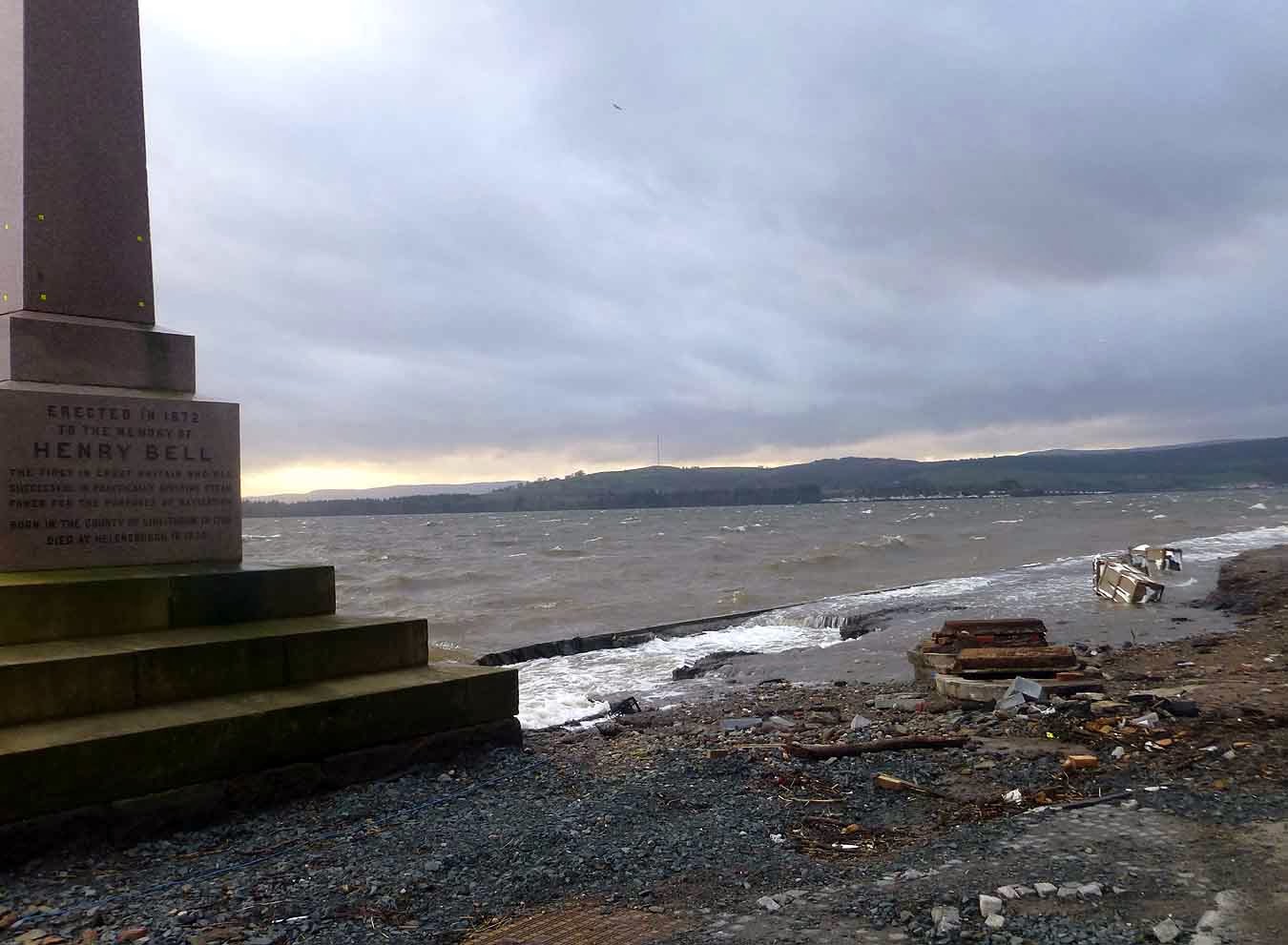 As you can see above, the tall monument from Helensburgh's golden era still stands but most of the seafront esplanade around it has been washed away. The square blocks  to the right are labelled as new granite posts, still in their protective crates for the promenade makeover, presumably weighing around half a ton yet they've been tossed around here like matchsticks by the power of the waves. 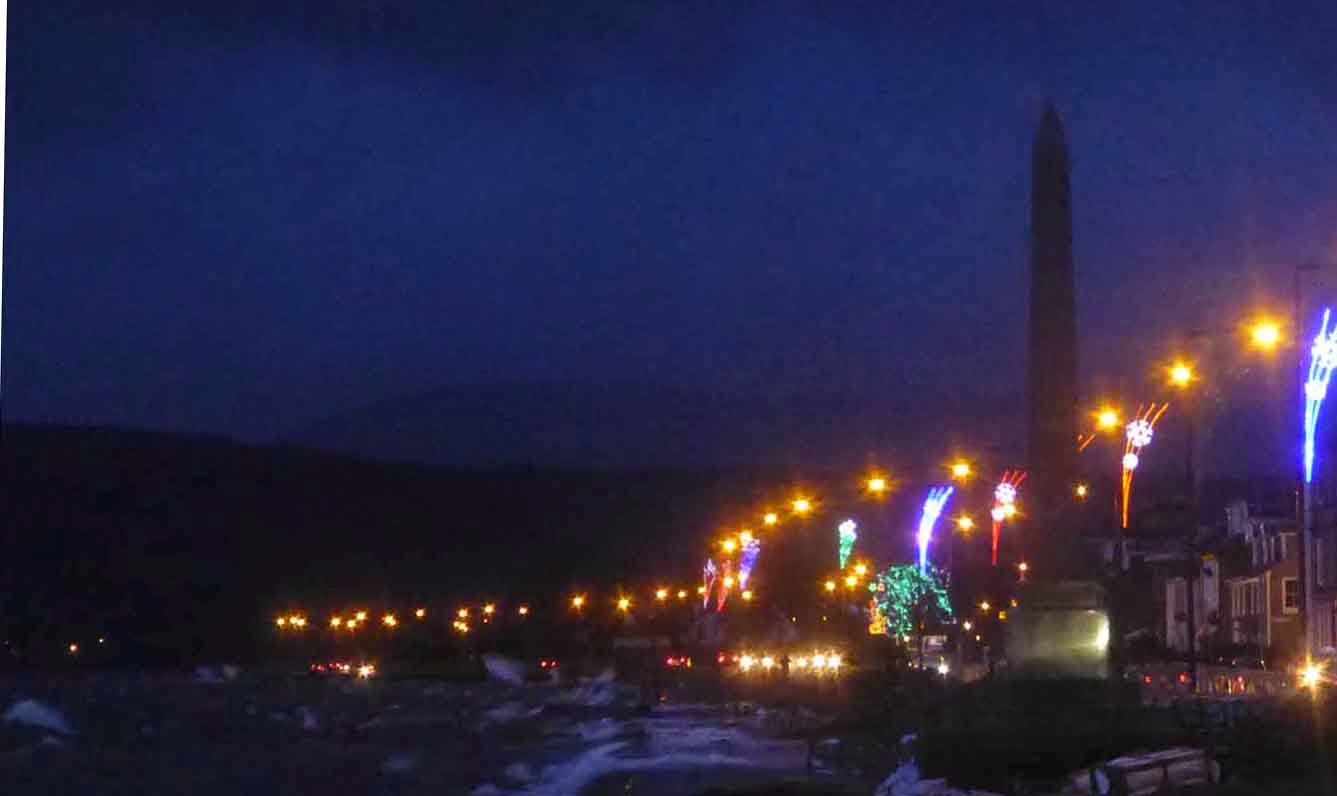 By this time it was starting to get dark and the Christmas lights were switching on. Luckily, apart from a couple of flooded car parks most of Helensburgh escaped with only minor damage to peoples homes. With storms of this severity predicted to increase however, due to climate change, I suppose the debate for all coastal towns is whether any available  money should go on higher flood defences or trying to attract much needed summer tourists with new visitor attractions. An unenviable choice to make. 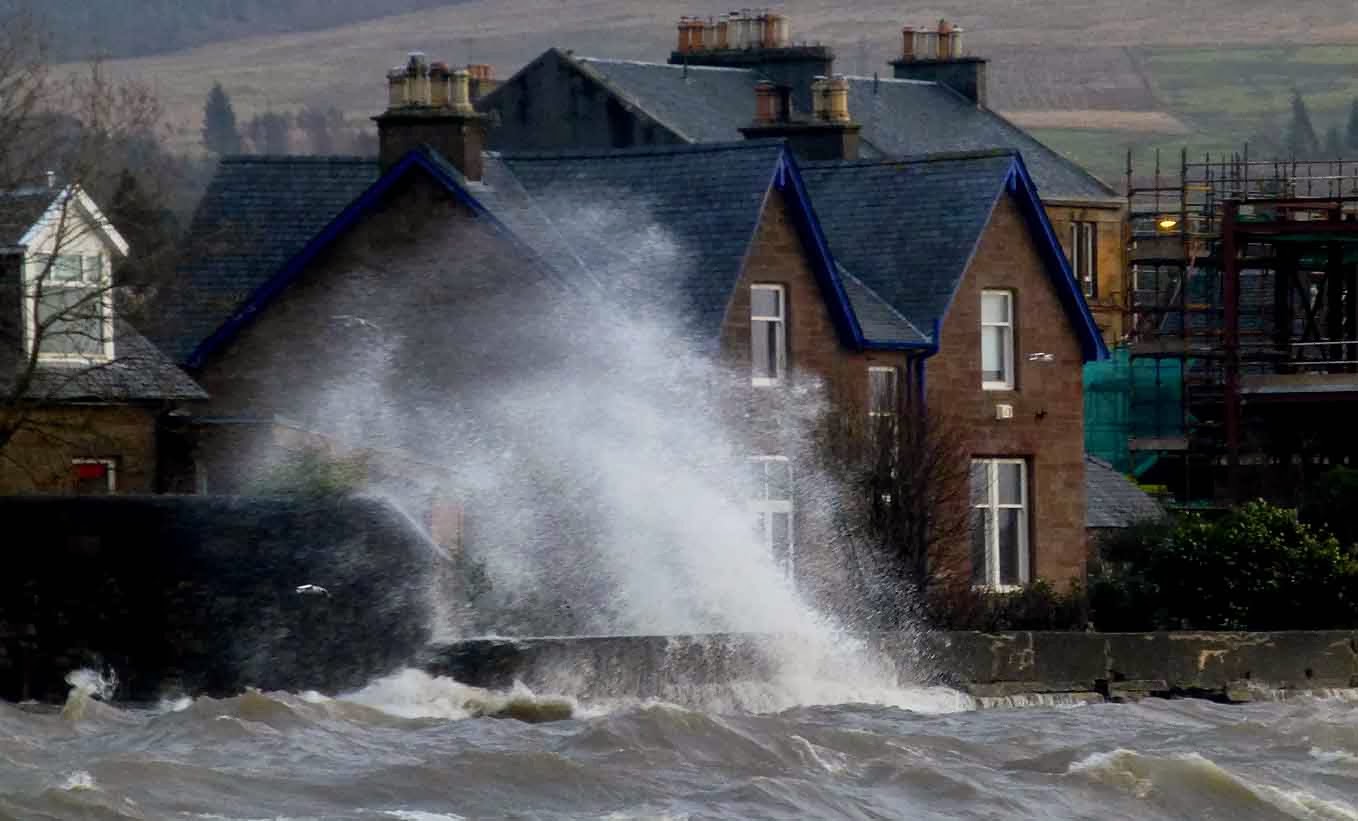 Earlier on I spotted several gardens and houses that face onto the sea receive a battering at high tide. 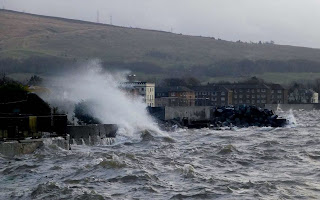 I actually walked along the beach here last summer and admired these coastal properties with their great views over the Firth but anyone that lives close to the sea is all too aware of its fickle nature. 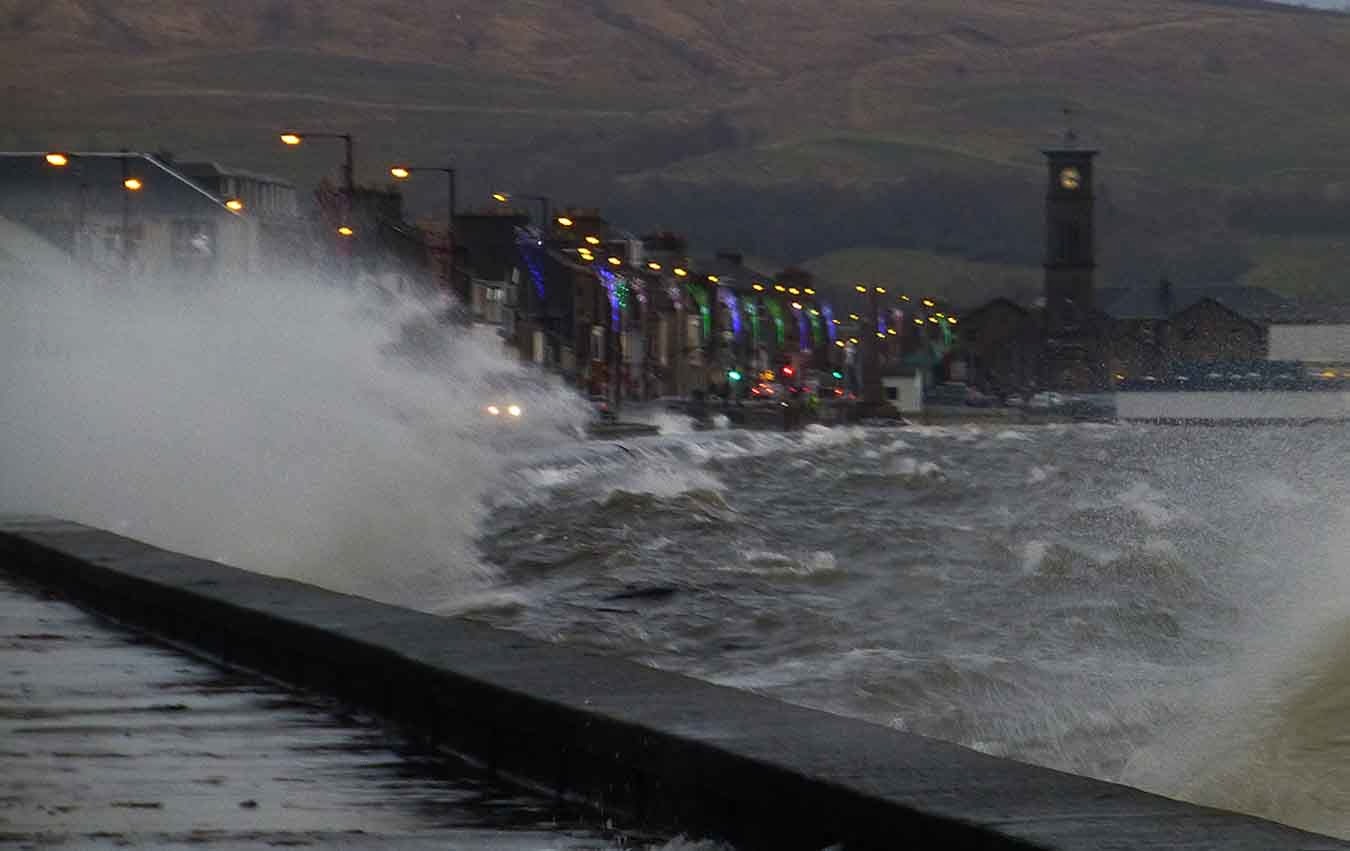 A 30 metre long wave comes ashore near the main street. 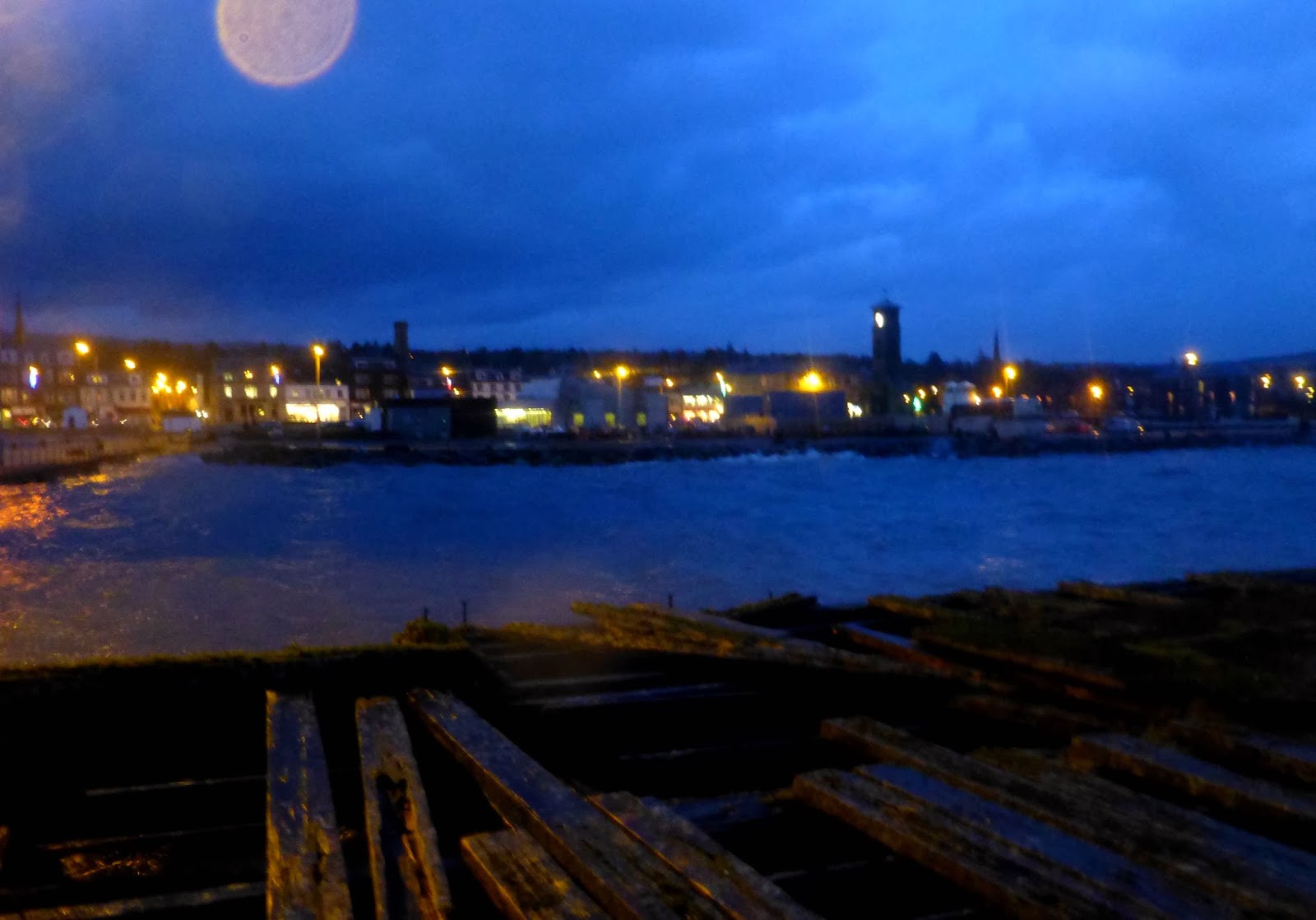 A view from the old pier at Helensburgh. The 'Moon' is actually a tiny spot of spray on the lens reflecting the light that I failed to notice. 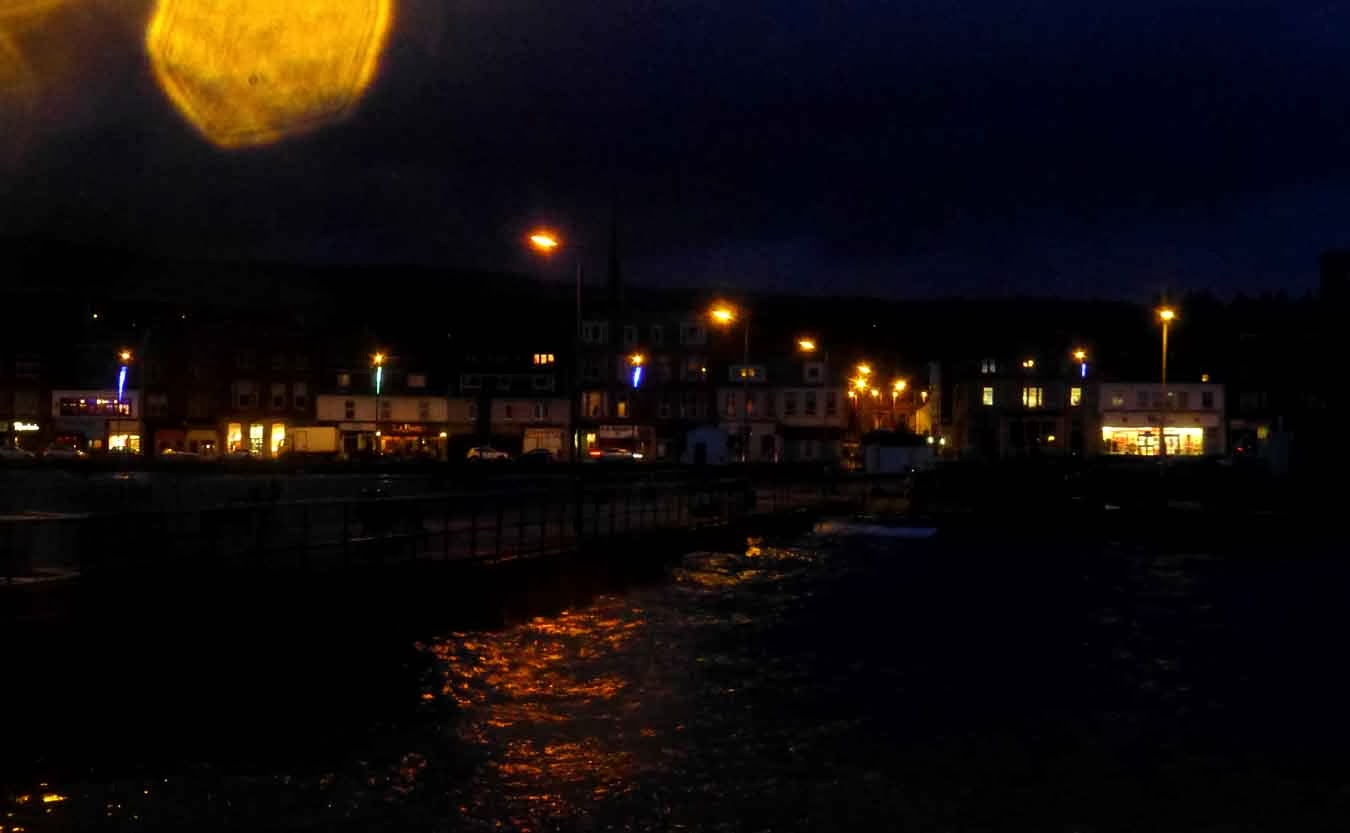 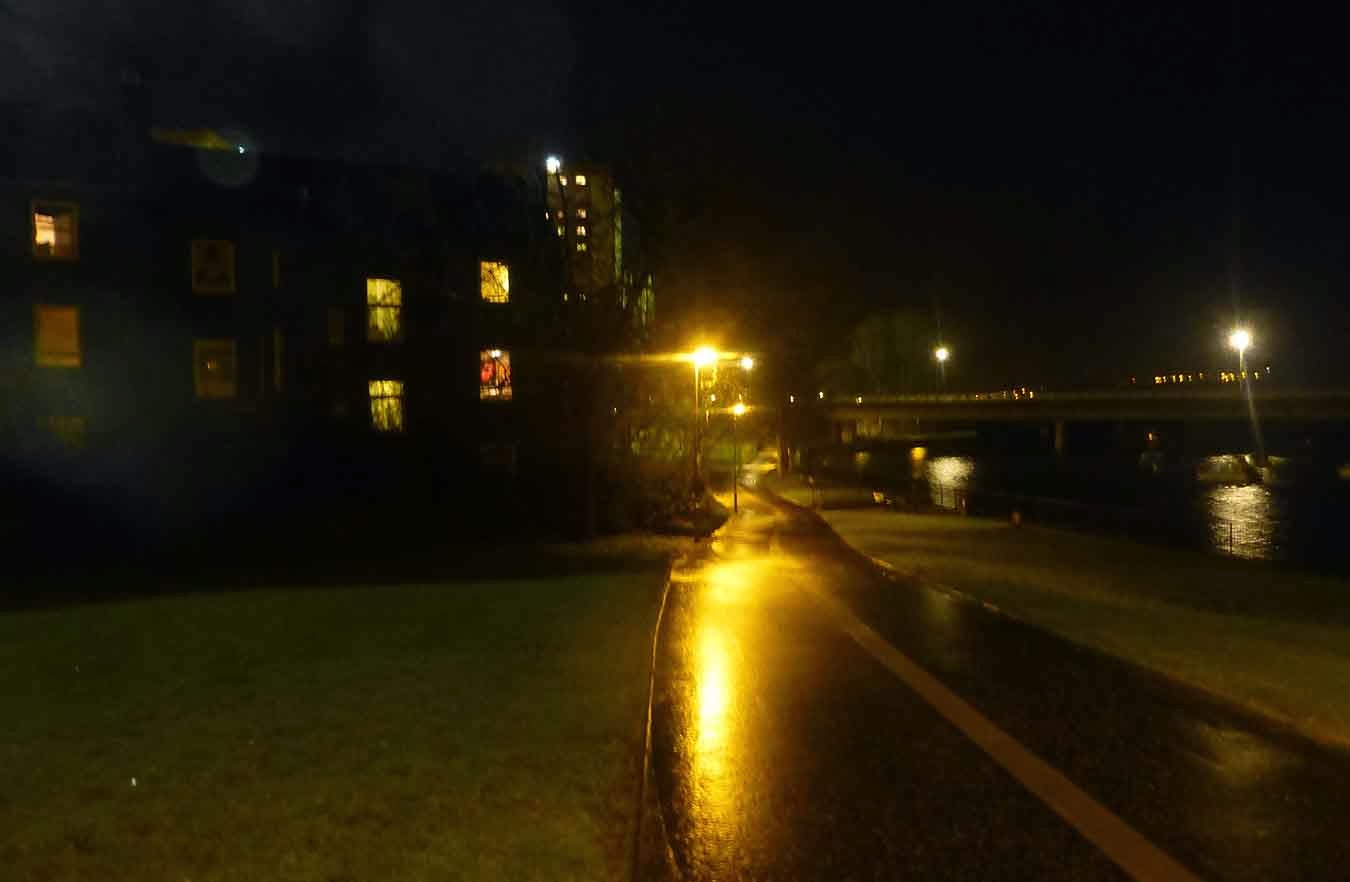 As it was dark by now I decided to head for Dumbarton as I was curious to see how much water was flowing into the River Leven. This is on the cycle track/walkway that runs beside the river from Dumbarton through Renton and Alexandra to Loch Lomond. 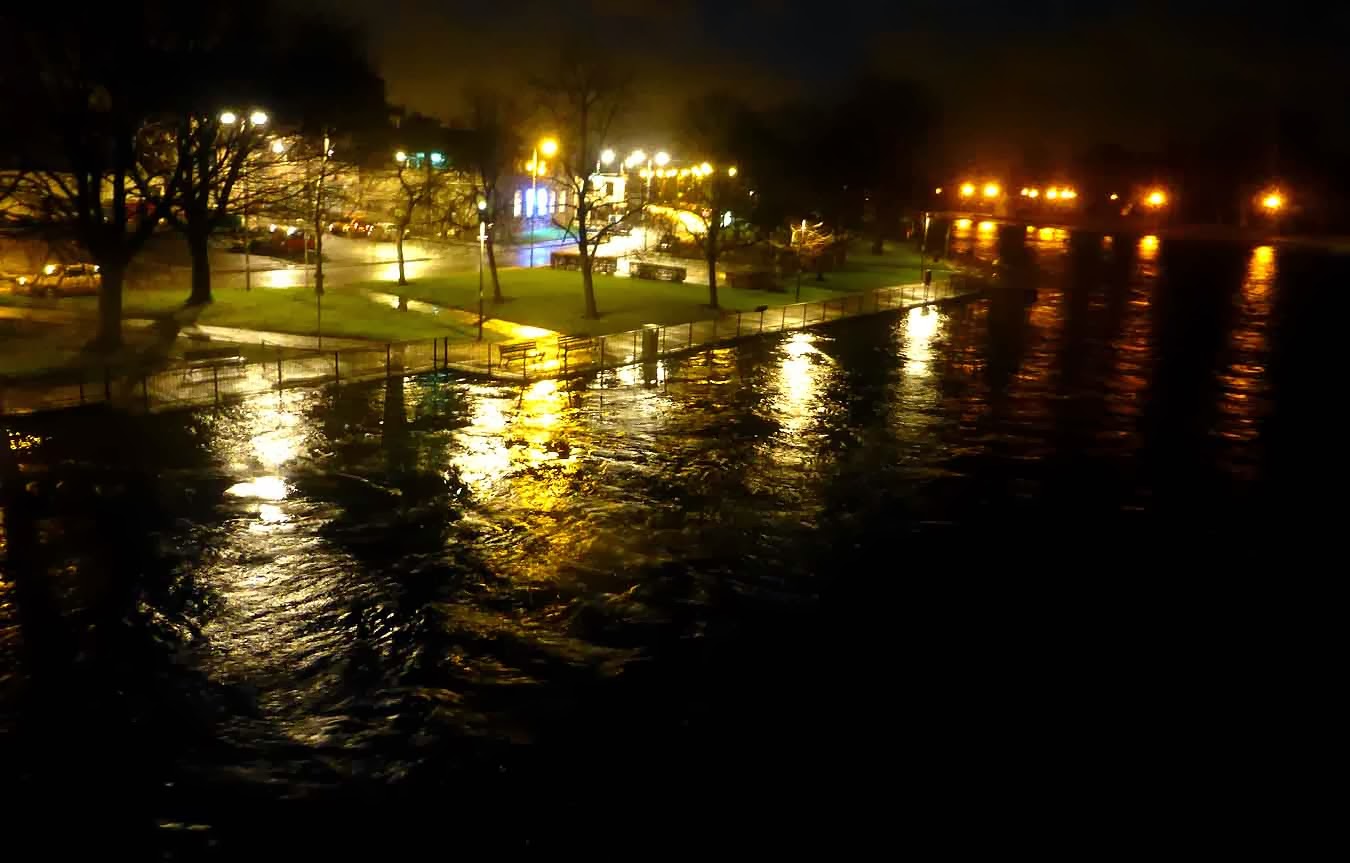 Normally the water level is at least a few metres below the car park railings but here its inches from  spilling over. The River Leven, although short, is one of the fastest flowing rivers in the UK as it acts as the only outflow for all the glens draining into Loch Lomond  and for any excess volume within Loch Lomond itself during heavy rainfall. Probably around ten to fifteen foot deep here and moving faster than you could run although it's still deceptively free of major turbulence. 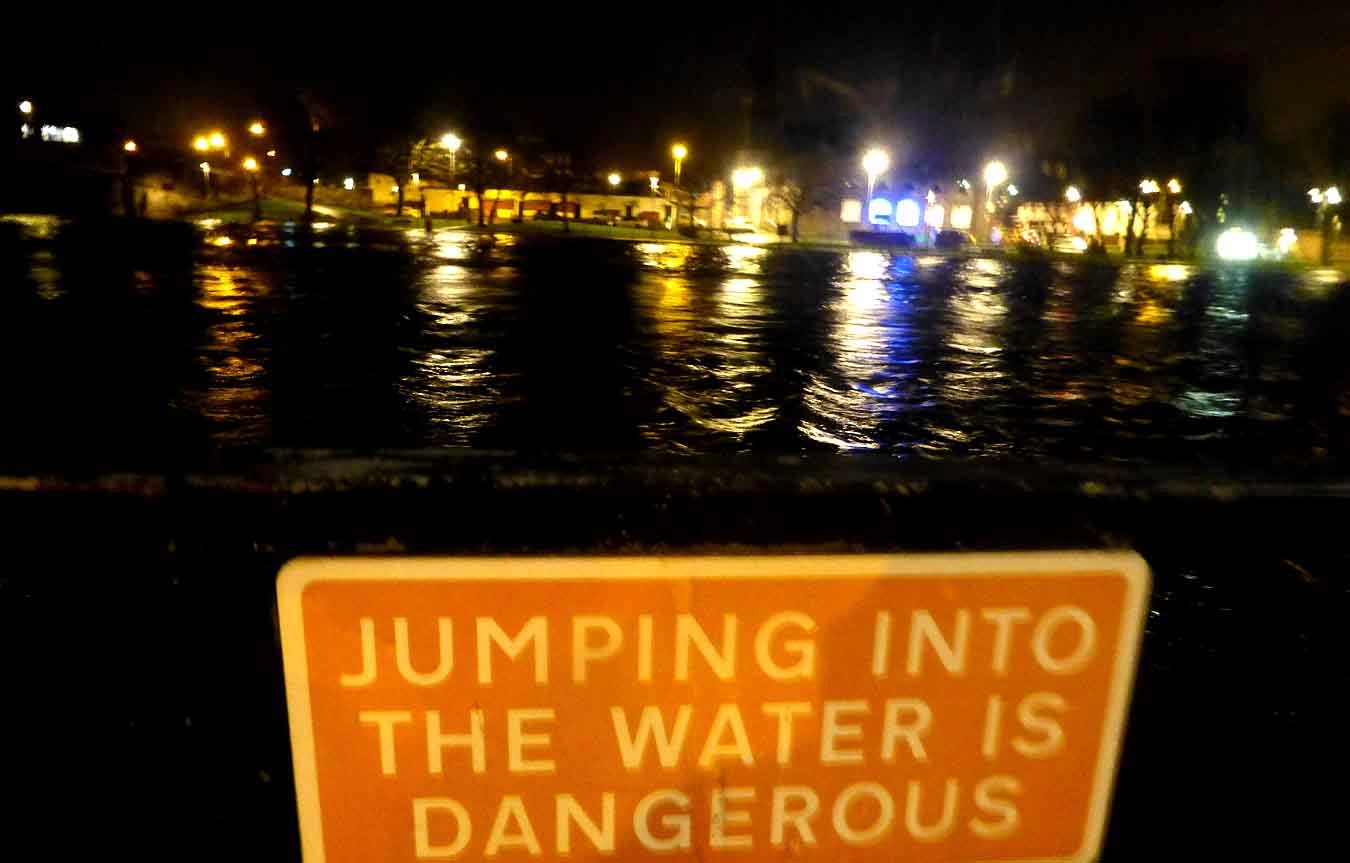 This large sign seems to be stating the blatantly obvious but I suppose there's always someone ready to sue the authorities if its not in place and someone fails to notice any danger in the vicinity. 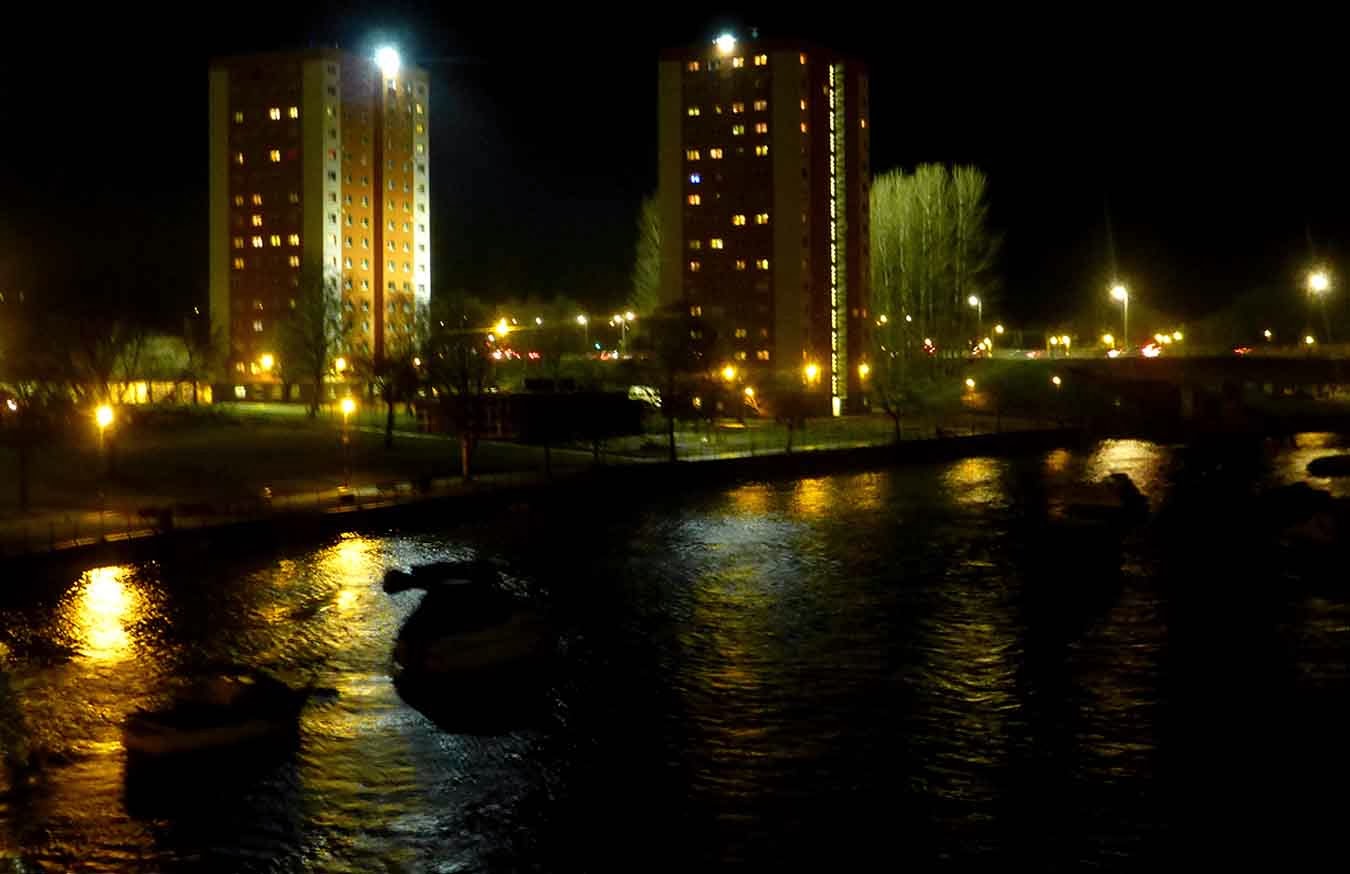 The high flats beside the River Leven. A different and unusual day or rather afternoon out. Back in the house for 6:45 just in time for the weather forecast and more storms predicted.
In keeping with the night time theme here's a catchy little tune with a difference from Romanian alternative rock band Travka. Both painting and song capture that special feeling of walking through a familiar but suddenly dark and mysterious city at night perfectly. Worth clicking on the painting full screen to study the detail as it's a fine example of atmospheric impressionist art.

Great pictures Bob, looks like you've been enjoying yourself.
Our local papers have been full of the storms and damage round Galloway. Over at Portpatrick it's ripped up paving stones and there's a danger of the harbour road caving in. It's the same with all the other small ports around with safety evacuations taking place. Seems to have calmed down for the moment but the forecast is for more of the same.
I must be getting past it cause I'm usually a sucker for going out and getting pictures.
I've seen the Severn Bore once and I wasn't too impressed but apparently it was one of the weakest in history at the time (they tell you anything, don't they !)
Catchy number by Travka and the scene is very atmospheric.

Cheers Jim,
It was a great,late afternoon and it has inspired me to take a lot more night shots recently as it's not that easy to get good clear distance pictures at night (not with my camera anyway) so its more of a challenge.
There's a lot of great music coming out of Europe and a good tune is a good tune in any language. Although it's signed the painting seems to be by an unknown artist from what I can gather. It's title 'Romantical love' suggests English is maybe not the artist's home language but the tone, mood and atmosphere depicted is spot on. I could certainly live with it on my wall and its a popular modern work.

Great photos and stories as always. I went to school in Helensburgh (at the old Hermitage Academy site) so it was nice to see a bit of the town. I live in Alaska now but really enjoy your regular updates of the hills and woods of home.

Hi Anon,
I knew it well from the road at least. The one with the blue sky and fluffy white clouds painted on the highest section that always made it a bit special.The new academy is low level polished black stonework and not as individual or eye-catching from the outside.I see from the map you stay in the busy part of Alaska.A sensible decision. I had a wee red dot over Easter Island once so there's still somebody there:)
Glad you enjoy the blog as the comments can make it all worthwhile at times.

I'd been considering a move to the seaside at Arnside but, this winter has certainly changed my mind! Spectacular photos though.

Glad to see some places still have colourful Christmas lights - ours nowadays in town are just white - how boring!
Carol.

Great picture of the seagulls sitting it out on the grass! It was bad on the east coast (http://loveofscotland.blogspot.co.uk/2014/01/spring-tide.html), must have been worse on the west. Helensburgh seafront's refurb was scheduled to have been finished before the storms. They will have to start again from scratch and the esplanade will be out of bounds for months to come.

Note that seawater and mechanical engineering can mix, if you use sacrificial bars of zinc attached to your mechanism (a wee offshore engineering tip!)

PS Anon I know from experience that most kids are desperate to leave Helensburgh but you must win the prize :)