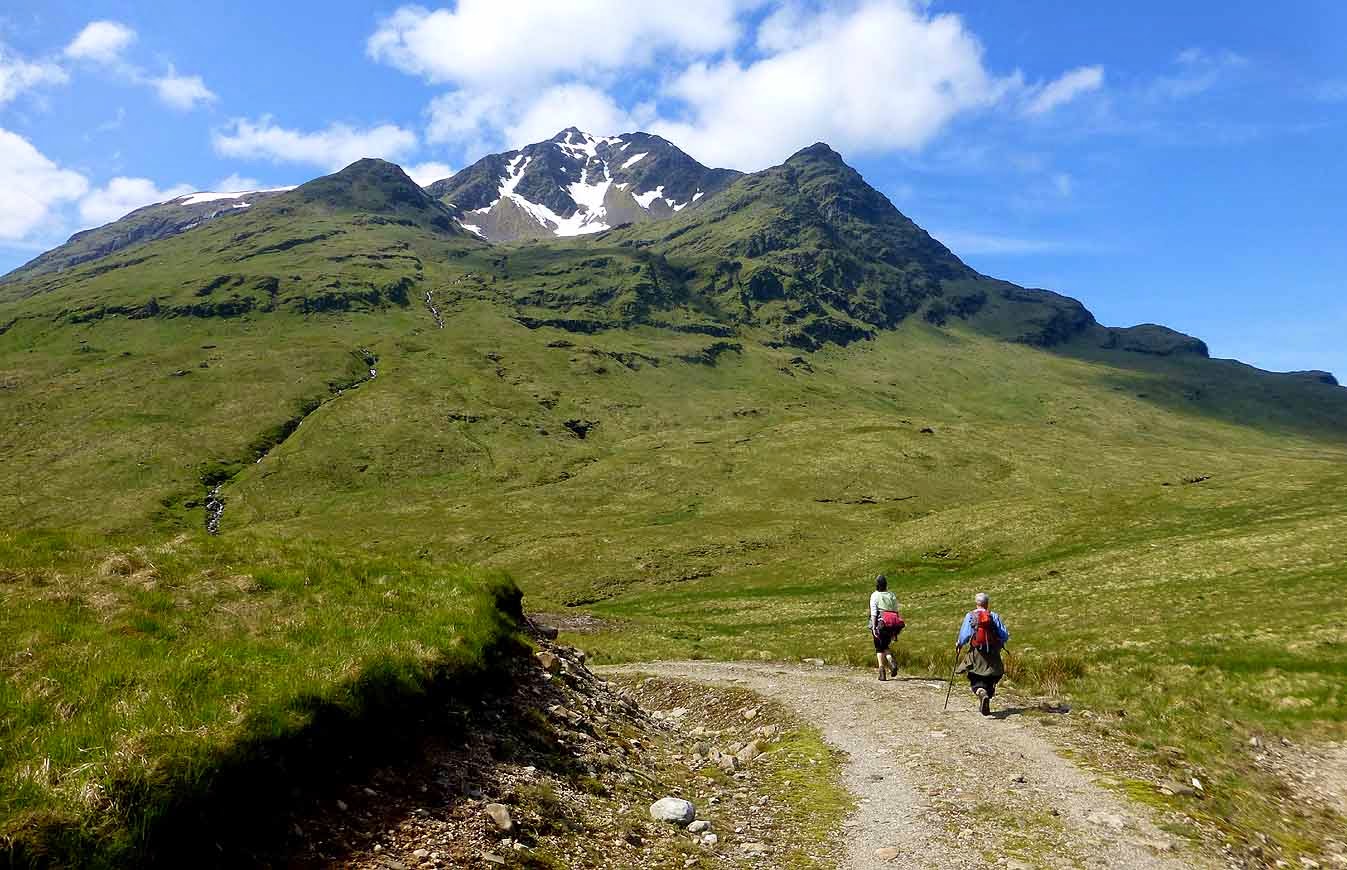 ALL PHOTOS CLICK FULL SCREEN
A few weeks ago I promised to meet up with Carol, a fellow blogger, at Dalrigh, just outside Tyndrum for her last Munro. As it was Ben Lui, 1130 metres, one of the great Scottish mountains of the Southern Highlands I hoped it would be a nice day. I was prepared to walk in the rain however with gritted teeth but it turned out far better than that... it was a spectacular day with just enough snow left on the mountain to make it interesting. Carol and Richard, her hillwalking pal on most Munro adventures,  had bikes in the car as did I. The three of us cycled in past Cononish Farm on a decent land rover track to eat up around 10 kilometres of route, there and back, which makes a big difference as I always remember it being a long slog on foot from this direction. 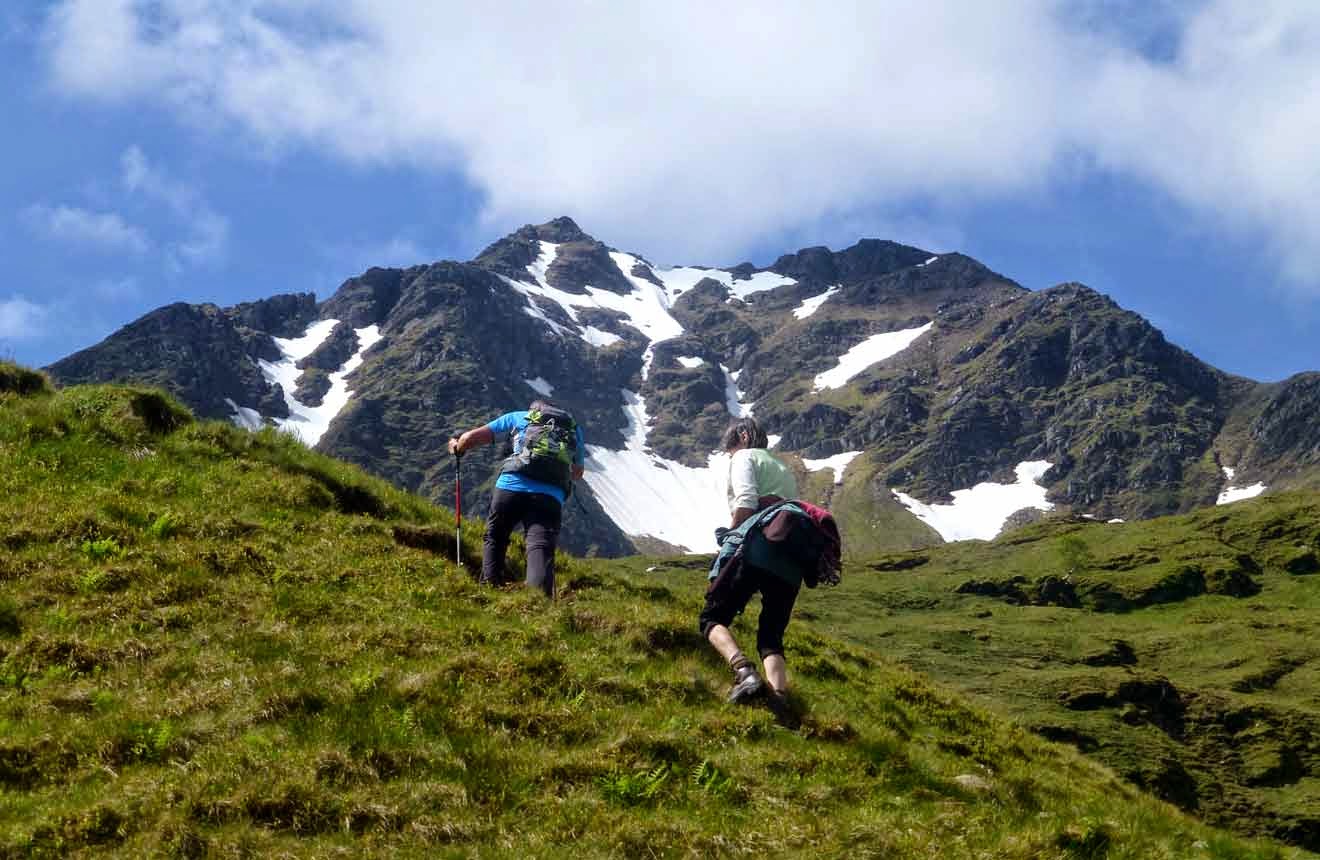 It is definitely the best way in though for views as the great central gully on the mountain with its twin horns, (the ridges either side of this) are seen to best effect all the way in. At the ruin of a farm just past Cononish we met Alan, another of Carol's friends who had walked in and was waiting for us to arrive. By this stage we'd left the bikes behind, chained to a fence just past the gold mine. 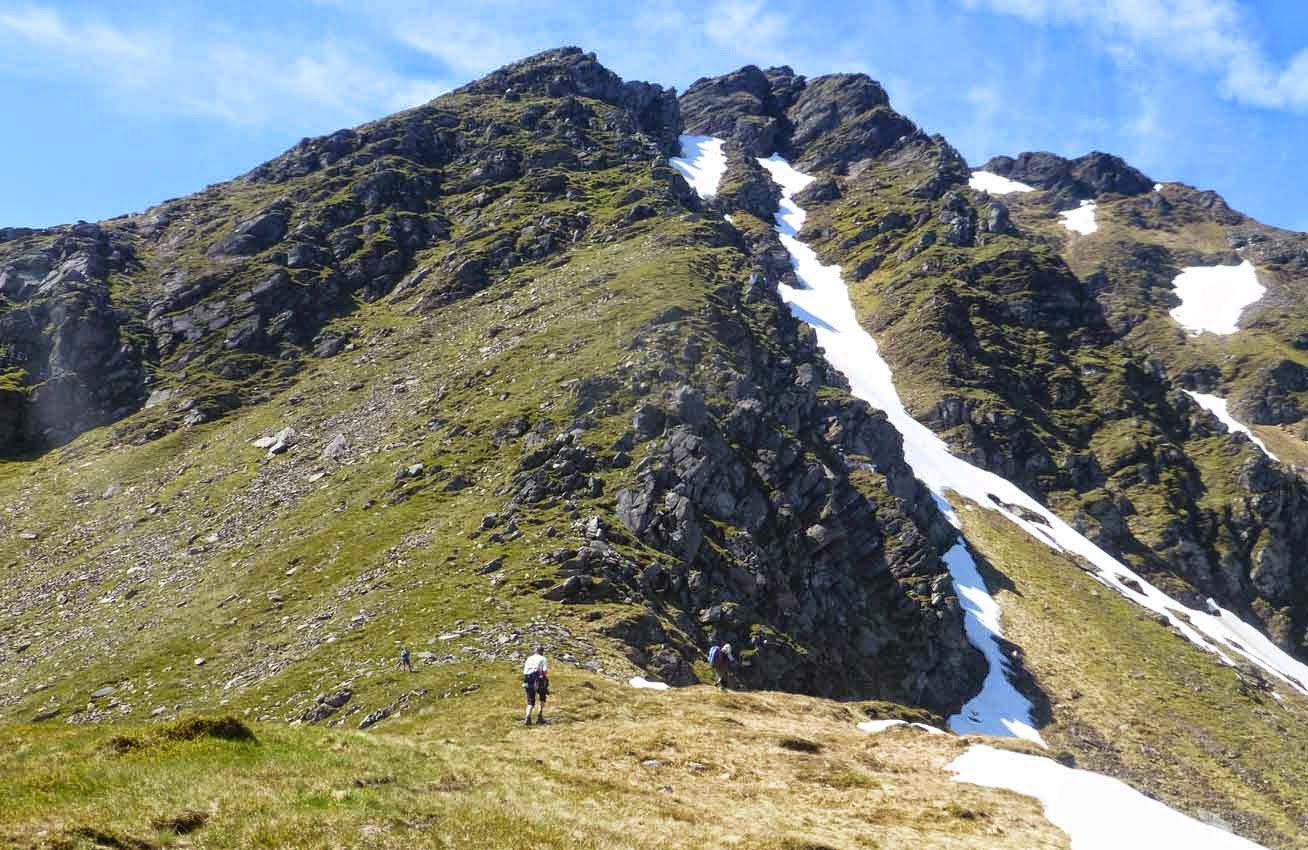 My vague intention was to attempt an easy scramble somewhere on the left hand ridge of the gully leading up to the summit and as luck would have it a band of lingering snow forced all four of us to take this line. 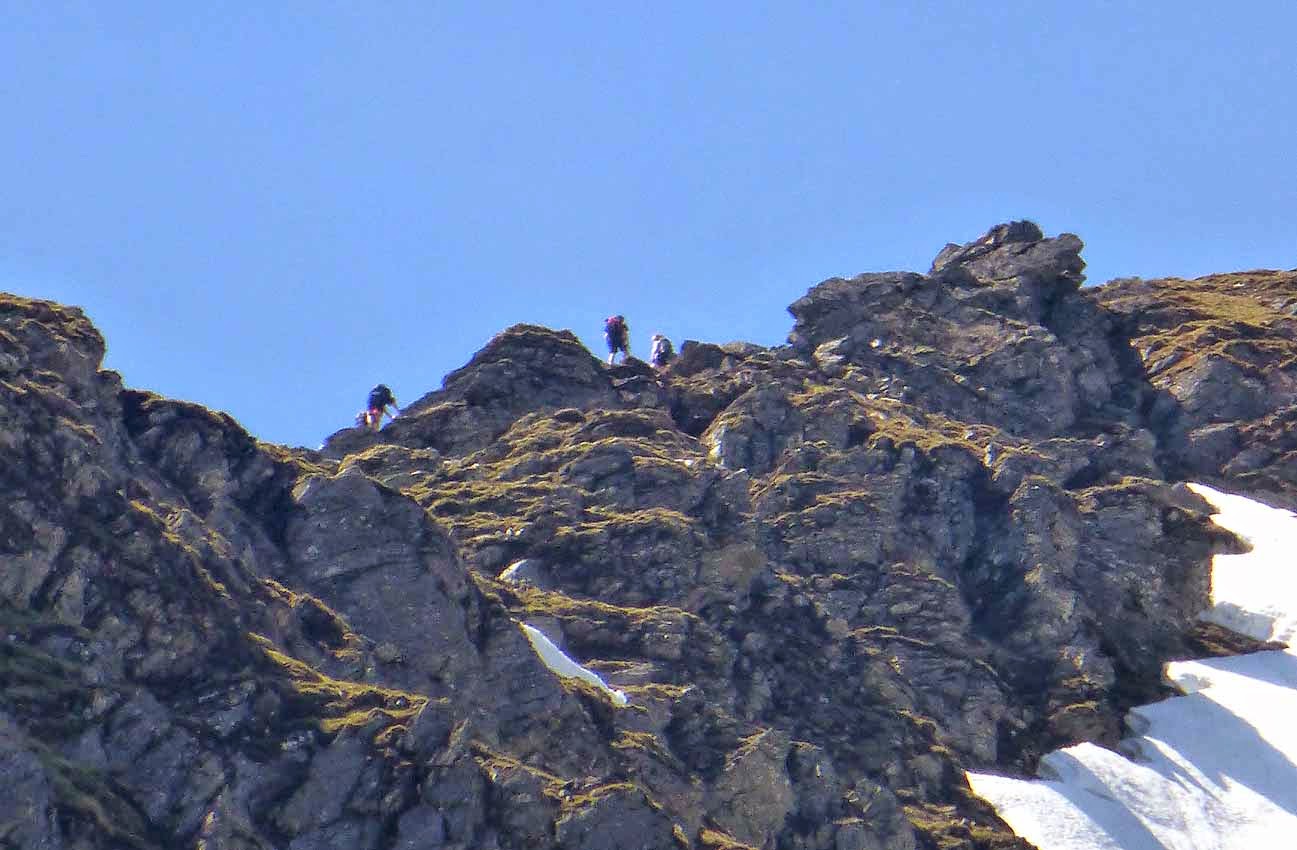 It turned out to be a good choice as it made a sporting though still easy scramble (around grade one) and the steep headwall and cornice topping the snow band looked a bit dodgy in the heat as we had no ice axes or crampons with us. 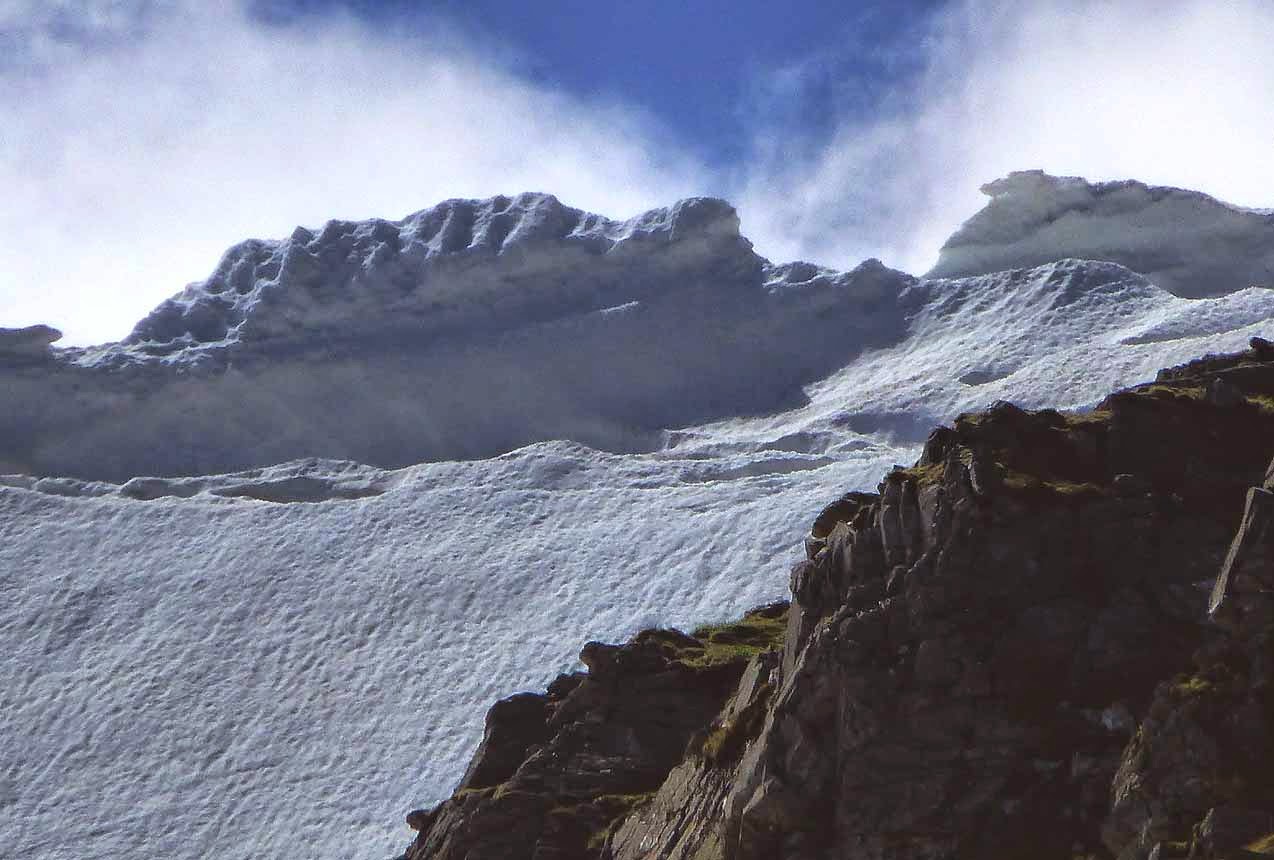 This is it seen from the ridge. I was surprised at the amount still remaining as most of the other hills had lost their snow weeks ago. Ben Lui is one of the higher peaks in the area though and the central gully is north east facing. 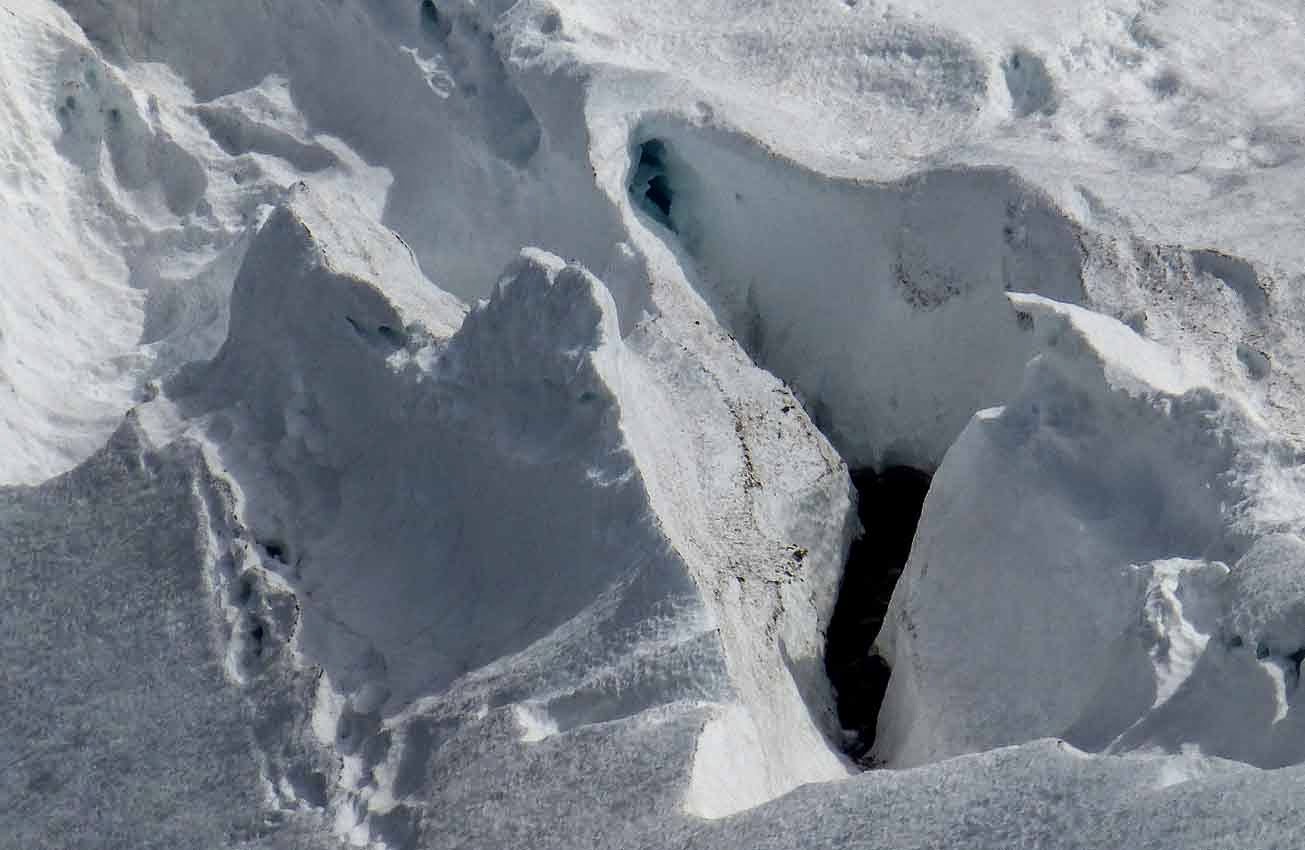 Loads of snow just past the cornice and a considerable crevasse behind that which looked around six to eight foot deep. The sort of natural feature you expect to see in the Alps not in springtime Scotland. 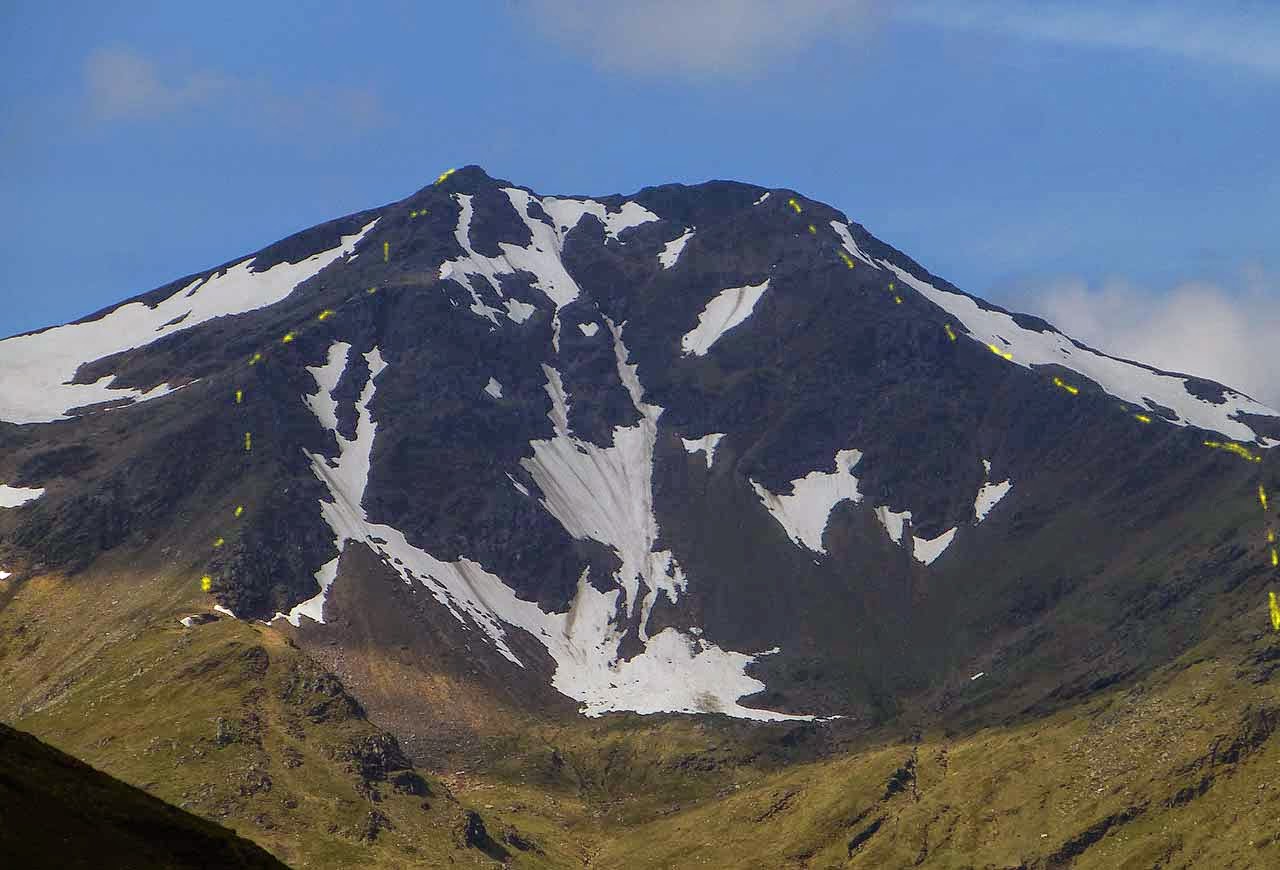 The plan was to hit the ridge lower down for a canter over to bag Beinn a Chleibh 916 metres. Only Carol and Alan did this while Richard and I headed for the summit of Ben Lui to await their return.
You can see our route of ascent and descent in the photo above.
There was plenty of interest on the summit to keep us occupied as it was crawling with what looked like crane flies. These insects have a remarkable life cycle living most of the time underground and only emerging for a brief period. Good short video here.
http://www.bbc.co.uk/learningzone/clips/the-life-cycle-of-a-crane-fly/7189.html 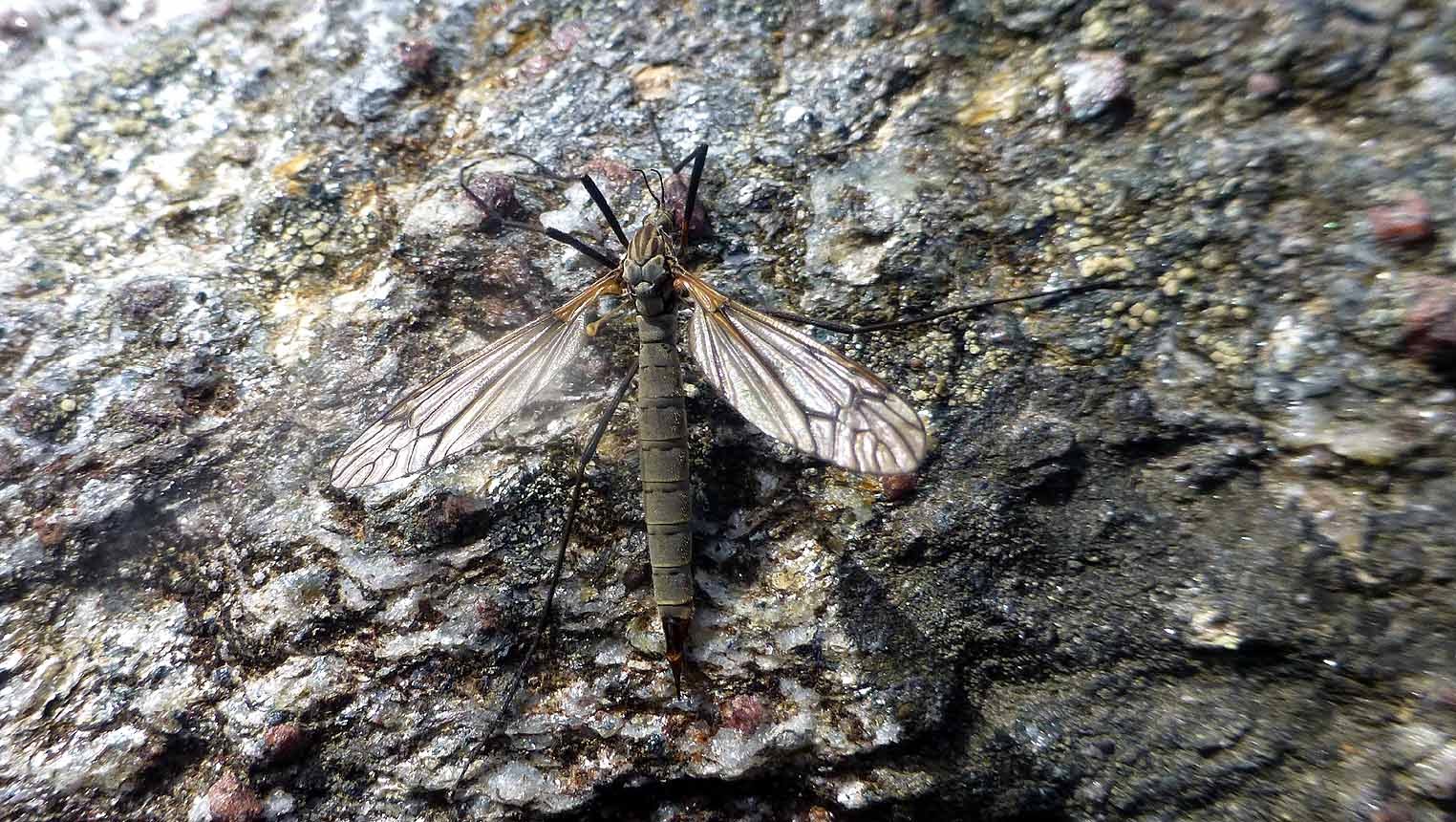 This looks very much like a cranefly although they are meant to emerge in the autumn for a few weeks but maybe different types have different life cycles. Always learning about nature which makes it such a fascinating subject. A right back leg seems to be missing here. 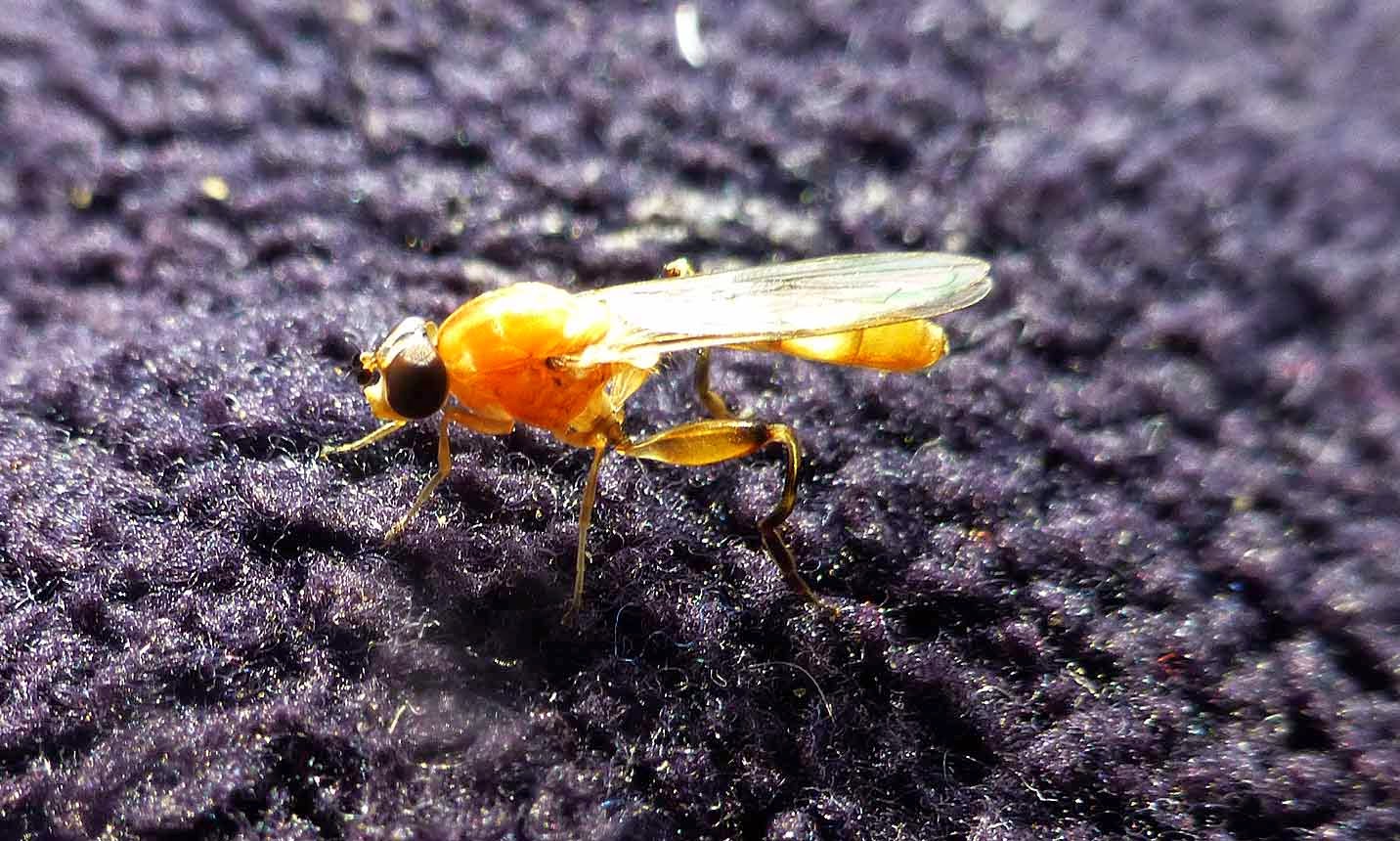 This tiny fly the size of my pinkie nail caught my attention on my sleeve. Looks almost wasp like in body shape but couldn't find it on the internet after a brief run though. Inspecting pages of creepy crawlies late at night though always give me the heebie jeebies as there are some really nasty specimens out there that see humans as nothing more than a  handy incubator for their young. 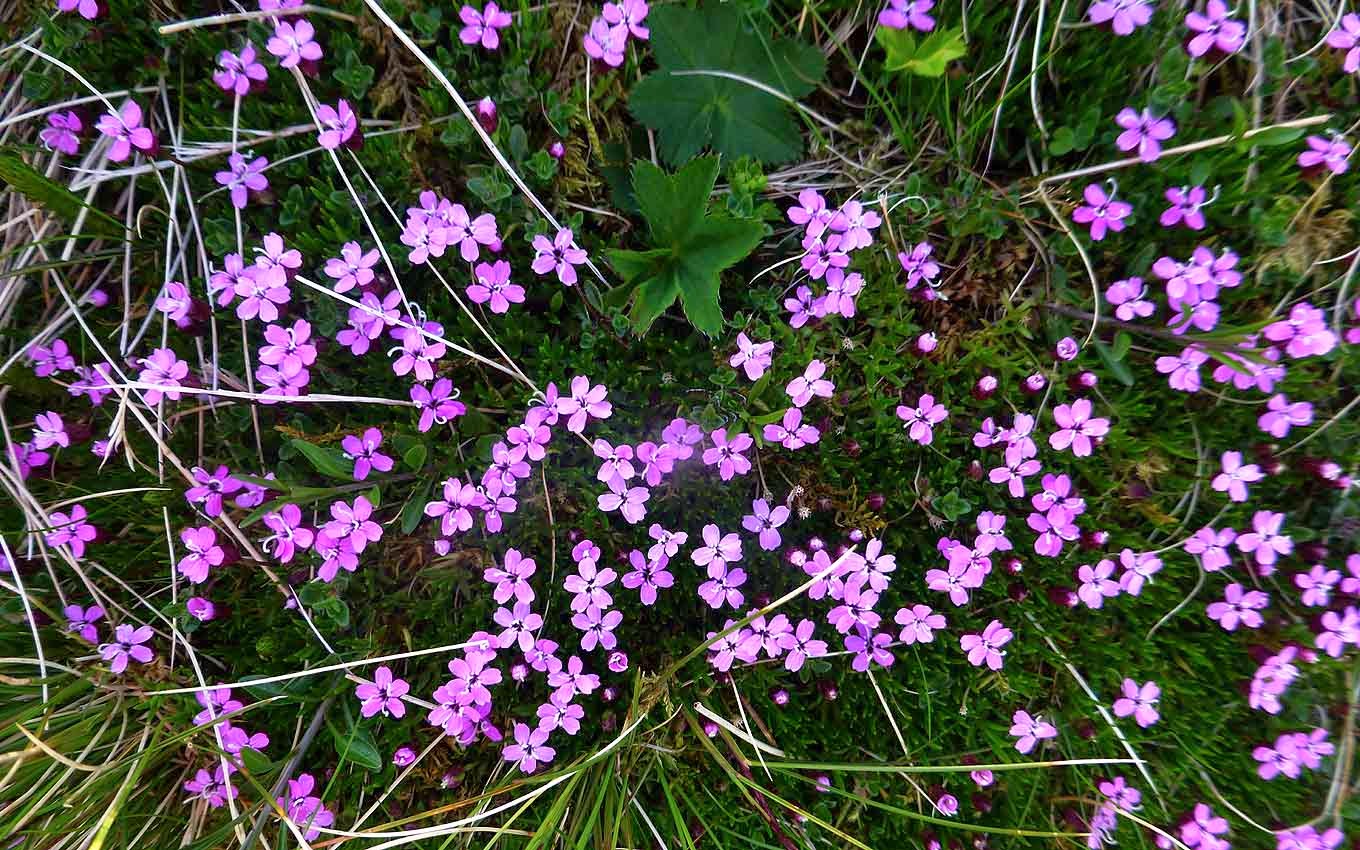 Nice patch of Moss Campion on the way up. This small plant used to carpet large parts of the Cairngorm plateau decades ago in spring but it is not so common  now up there as the moss cushions are easily damaged and it's harder to spot where they are under a layer of thin ice or snow. When Carol and Alan returned and bagged Ben Lui they were shattered but a few celebration  chocolates from Richard soon perked them up. 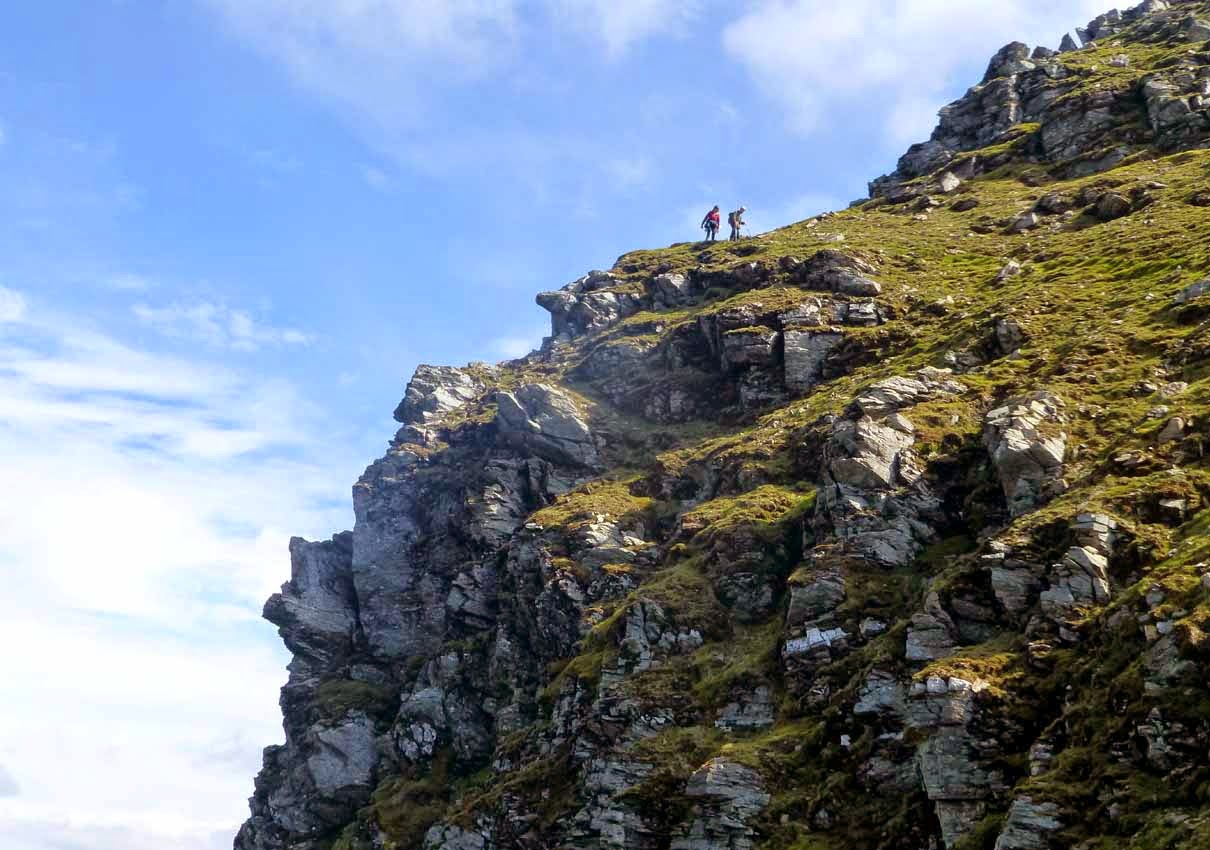 It was Carol's own choice to descend by the other ridge but I don't think she liked the drop much as the faint path weaved its way down through various bands of steep rock. Good for photos though :o) Alan stormed ahead at this point as he had to walk back out again and it was a long way. 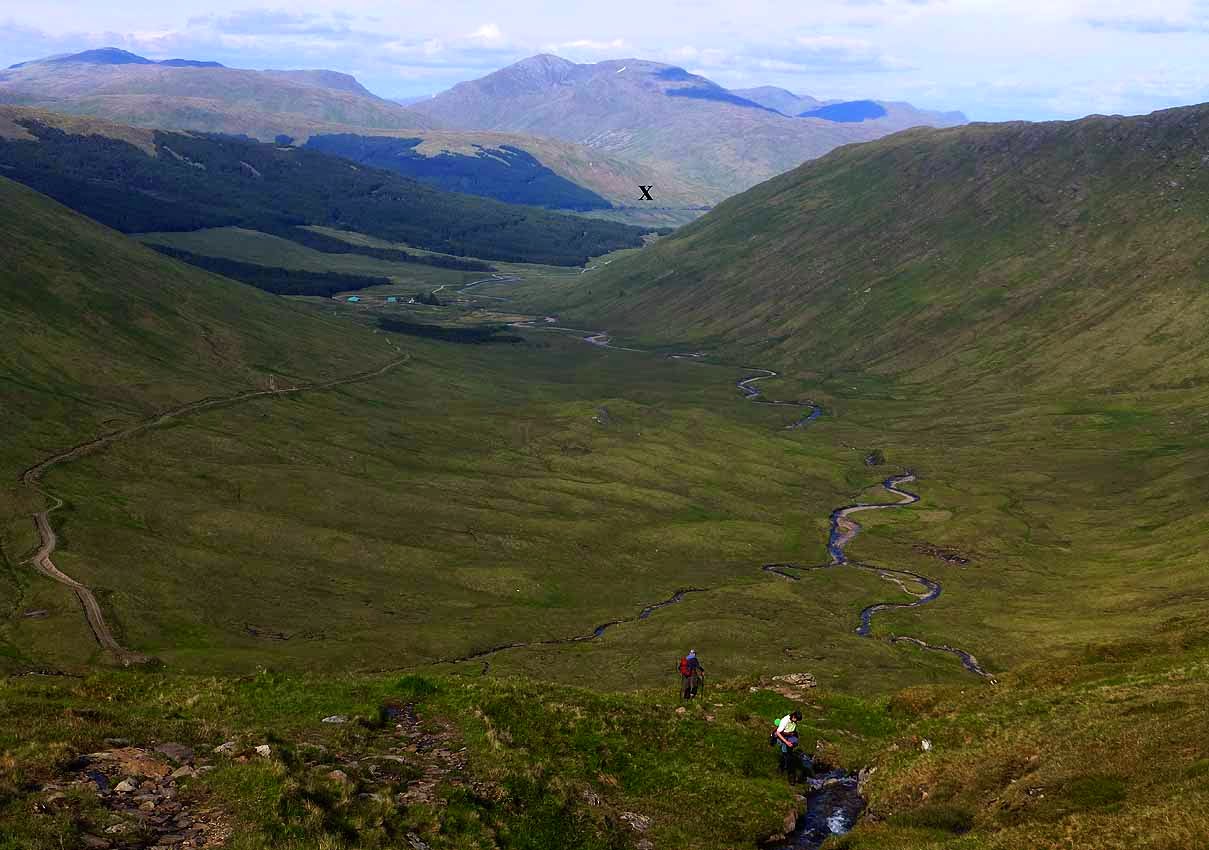 The X in this photo shows exactly how far it was and I for one was glad we had the bikes. A great day with, thankfully, the sort of weather I'm accustomed to these days, and fine companions.
Congratulations to Carol for finishing the Munros in style with an excellent peak.

On a different matter my paperback book is finally out in the big bad world on create space and Amazon bookstore for £10.99. This is as low a price as I could make it at 500 pages and 50 plus photographs (black and white in paperback form) as I only get 79 pence a copy.( in case you think I'm raking it in at that price) Ideal weapon when dropped on unsuspecting spiders or clegs from waist height as a humane pest control and I've tested it yesterday.  Also makes a fine doorstop or table leveller. At a push you could even read it. 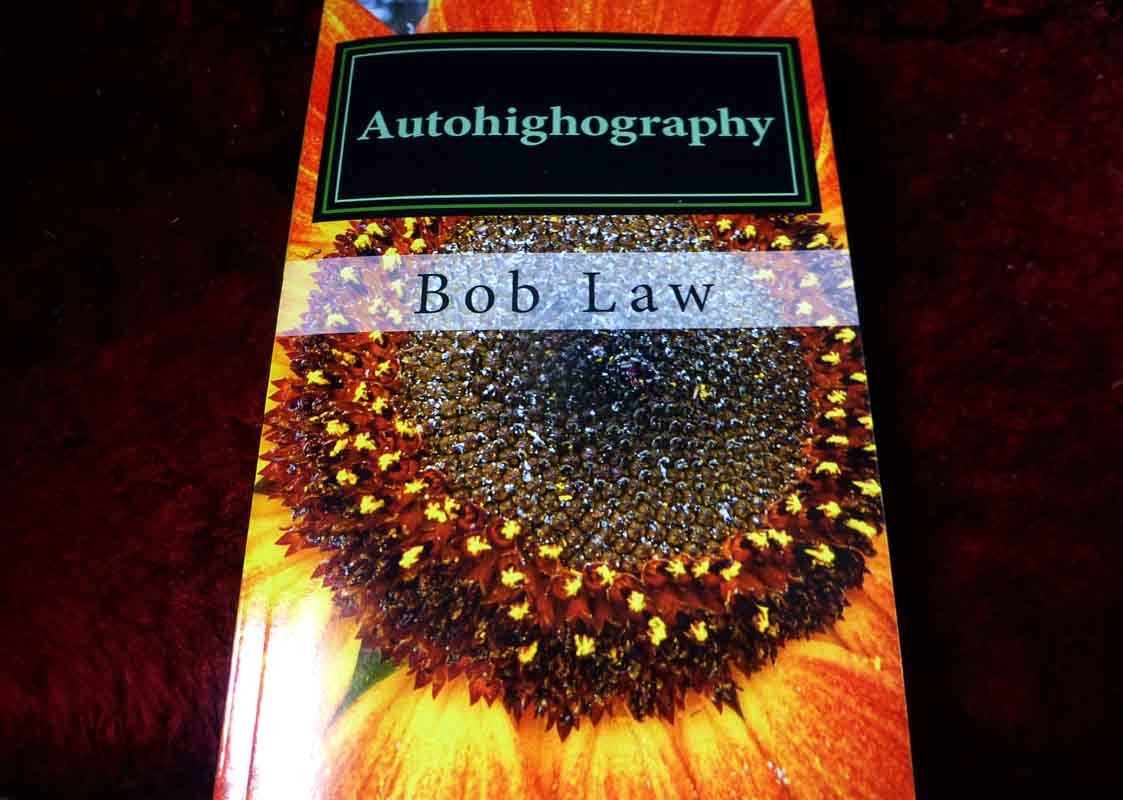 Video this week is a relaxing short ballad featuring two time world champion longboard surfer Daize Shayne. Elite sportsmen and women usually have a fluid grace about them that makes what they do seem easy and effortless. " Poetry in motion" could describe this. Sometimes its actually harder to surf well on a calm sea but not for this woman obviously.

Your wee beastie looks like a type of Ichneumon fly I gave a quick look up on my doofer and under "more images" there were a few likely looking candidates for your wee guy.

I think you are spot on there Paul. Thanks.

Fit folk exist, there's the proof in this post.
Some brilliant pictures Bob, couldn't believe all that snow.
I think it's a fact of life that the crane fly will lose a limb over it's lifetime, I've even put a virtual leg in to make the picture look better.
If the wee fly is parasitic, i'd keep an eye open for any itches or developments on your exposed skin.
Well done too to Carol for completing her Munros, that's not her on the surfboard is is?

Hi Jim,
Carol is certainly fit as she maintained a blistering pace up Ben Lui.
I've had a run of tough days out recently with Alex and the longest hill days always seem to coincide with the warmest weather. Funny that for a man that says he doesn't like the heat. Not a movement from him all spring when its cooler :o(
Surfboard. Nope!

"there are some really nasty specimens out there that see humans as nothing more than a handy incubator for their young."

What absolutely superb photos you've got there Bob - can I reblog this post on my blog? Your photos are a lot better than ours were... Also, did you say I could take copies of them for my private use on my PC? I can't remember...
Carol.

Hi Carol,
Yes, feel free, and please take any of the photos you like.
I learned my lesson a while ago when I was looking through random images of British bugs late at night for a caterpillar I hadn't seen before and suddenly up flashed a maggot from Africa instead that crawls up your nose when you are asleep then bores its way into your brain. Fact! Didn't find getting to sleep very easy after that.

My God! that's 'orrid! :-o I've heard of warbles before which burrow into you and lay eggs and then a few months later a bug pops out of your chest or suchlike and waves around but not the brain-burrowing one - nasty!

Thanks for the permission for the photos and the reblog :-)
Carol.

I'm a designer working for Forestry Commission Scotland - Im working on a panel to go in our Car Park at Glen Lochy ­- It promotes Ben Lui as a good climb and I have come across one of your photographs which would be ideal for the panel. I wonder if I could have your permission to use it? and if pos a HiRes version.
The photograph is from ‘Carol's Last Munro' 4 July 2014 ­ Ben Lui

Hi Barry,
You are welcome to lift the relevant photo from the blog but I no longer have a hi-res version of that set as I take 1000s of photos per year which takes up loads of computer space. I don't get any money for them so it doesn't make sense to buy extra external storage just for all the old ones in past years.
Bob.

Many thanks for your reply and for use of the image. I think I can just about get away with the LowRes version.
- I can credit the photo to you if you wish (Ben Lui - 'Getting Closer' ©Alex & Bob)?
What do you think?

Hello Barry,
As Alex gave up blogging years ago '(copyright) Blueskyscotland blog' will do. I just keep him in the title as he's still a friend but for the last five years I've been the sole contributor. No need for the 'getting closer' bit.
Best wishes
Bob.