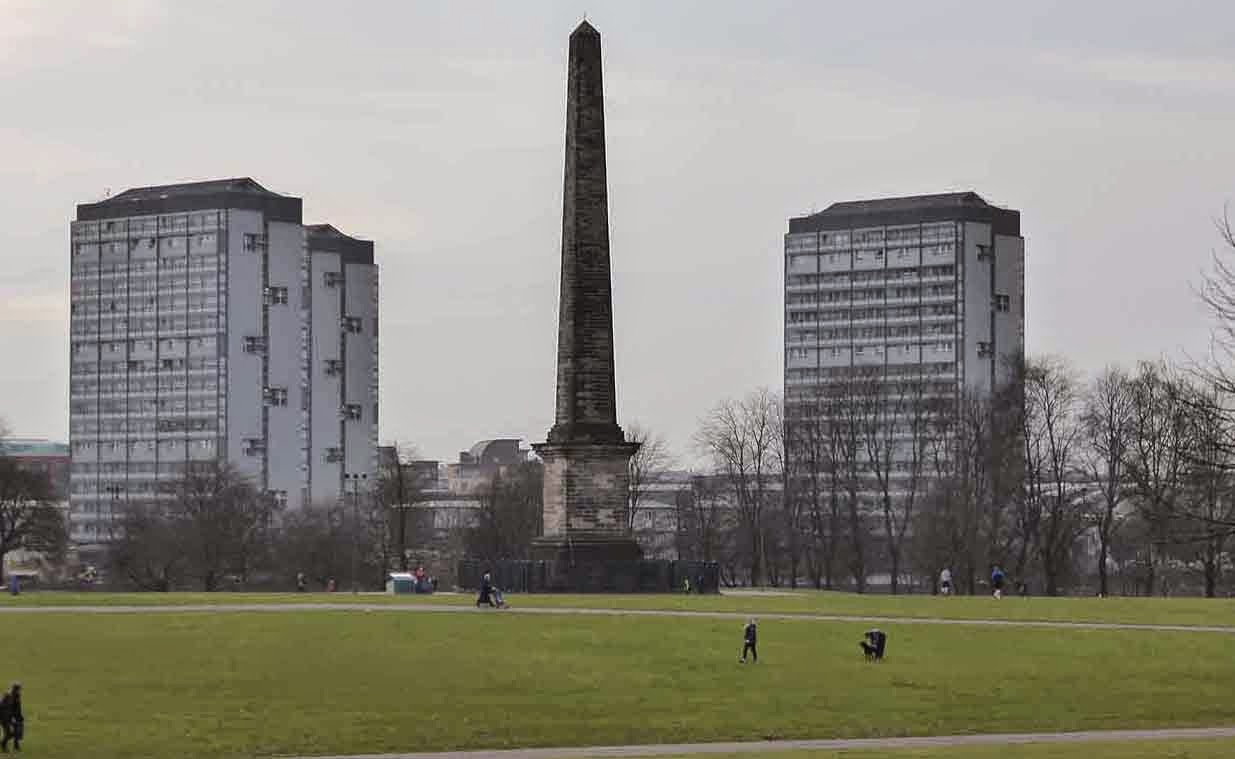 ALL PHOTOS CLICK FULL SCREEN
As I,m collecting information for my latest book and needed some new photographs of Glasgow's east end I had a day out in Glasgow's oldest park. Glasgow Green. It's one of the largest public parks in the city and also one of the flattest throughout it's length which is quite an achievement for a city built over Drumlins (leftover glacial moraine forming dozens of small rounded hills which litter the entire area (a drumlin swarm is the correct term) and give Glasgow city landscape views a distinctive rolling appeal to the vision and feet. Probably the reason why its fine citizens used to fall over occasionally in the street when they were discombobulated by all the inclines surrounding them and couldn't get up again but outsiders put it down to excessive alcohol consumption of course. Many of Glasgow's public parks to the north, south and west are built on or over Drumlins, former leafy estates preferred by rich merchants on hilltops to escape the factories and squalor in the crowded streets below.As the factories and docks gave them their wealth in the first place in many cases they had to live close to their main source of income and keep an eye on things.
The east end is one of the flattest districts in Glasgow which made it ideal for factories and the prevailing wind direction of most Northern European cities is mainly west to east anyway meaning that any smoke, vapours and smells from industry didn't annoy the posh folks living in the west end. Most of the large industrialized cities in Britain follow this same pattern dictated by the wind but the east end is gradually altering now that large factories no longer produce harmful emissions to the same extent. 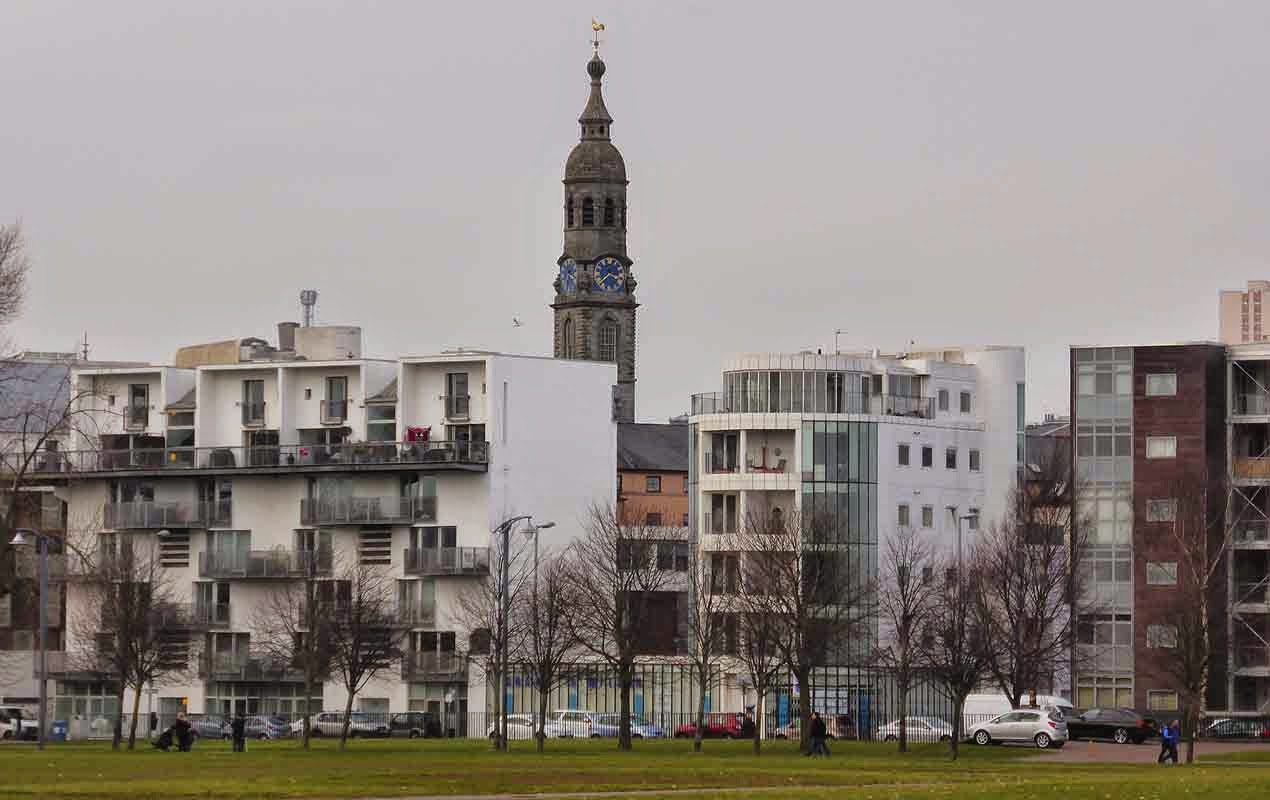 A view towards the Saltmarket area. 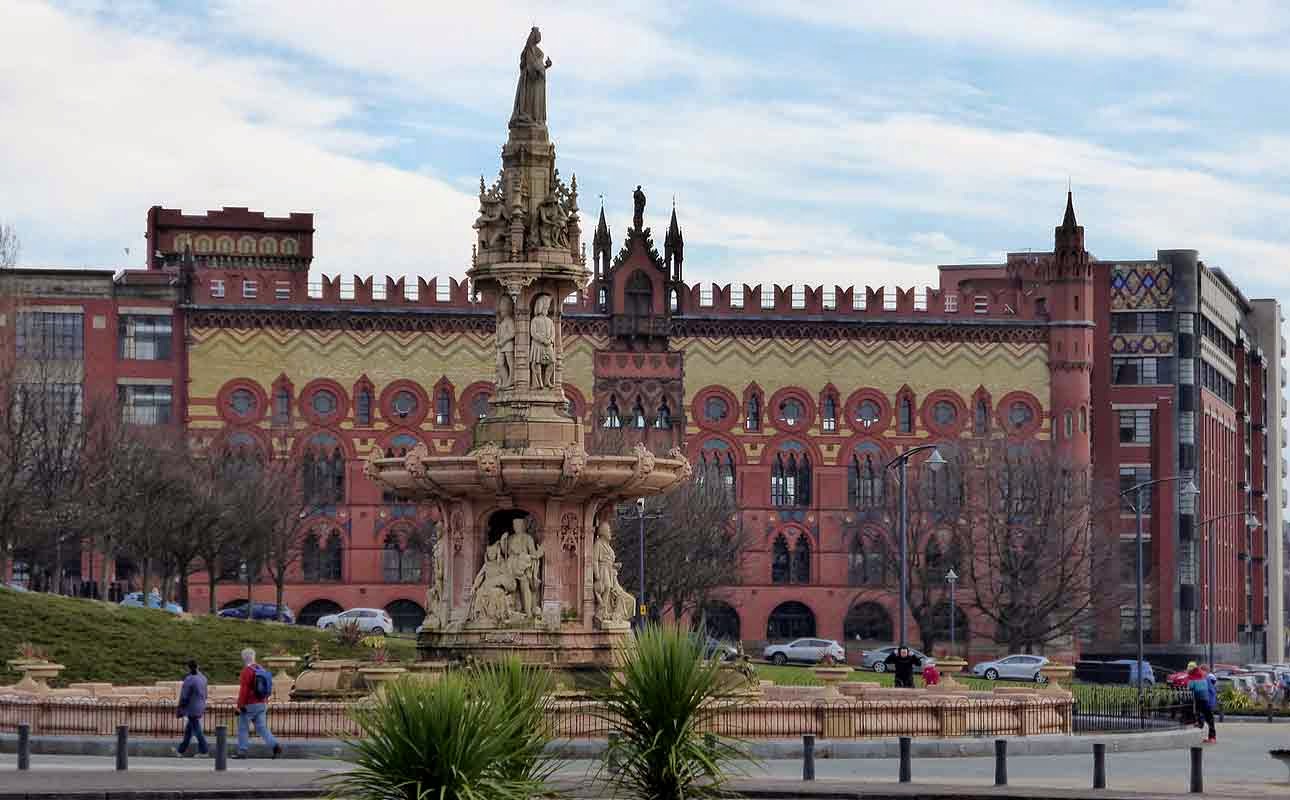 The magnificent Doulton Fountain, at 46 feet high the largest terra cotta fountain in the world,with the former Templeton's Carpet Factory as a backdrop. The People's Palace and adjoining Winter Gardens are nearby. The nearest public parking area is on the street next to this factory or other quiet streets running along the edge of the park near the People's palace.
In 1889 one of the walls constructed for the above carpet factory collapsed in a gale landing a mountain of bricks on the weaving sheds below. 29 working weavers died, most if not all of them young women. 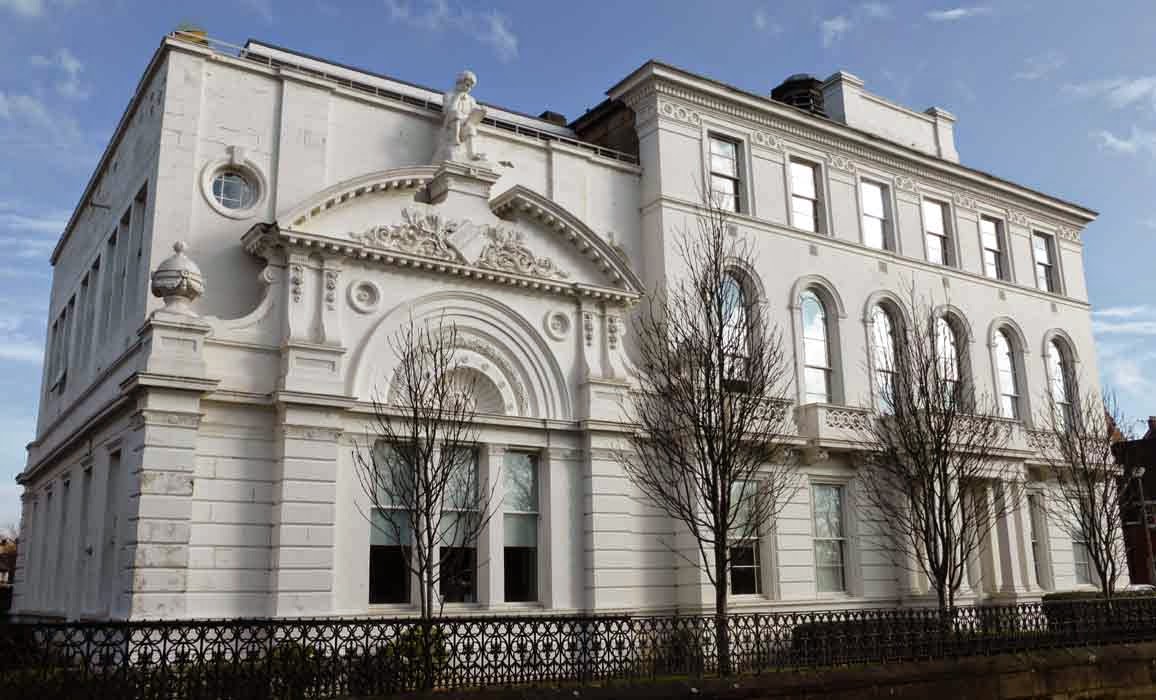 There is a Calton heritage trail near the park. Calton is one of the oldest districts in Glasgow with a long diverse history so it has many unusual buildings. This is the McPhail Mansion, which was a special school for many years before being converted into flats. The nearby Home for Destitute Children, also on the trail is so evocative of Victorian times. There is a comprehensive guide here to the history and buildings of the area.  An interesting walk, for tourists and Glaswegians alike curious to find out about the city's past.
http://www.glasgow.gov.uk/CHttpHandler.ashx?id=6656 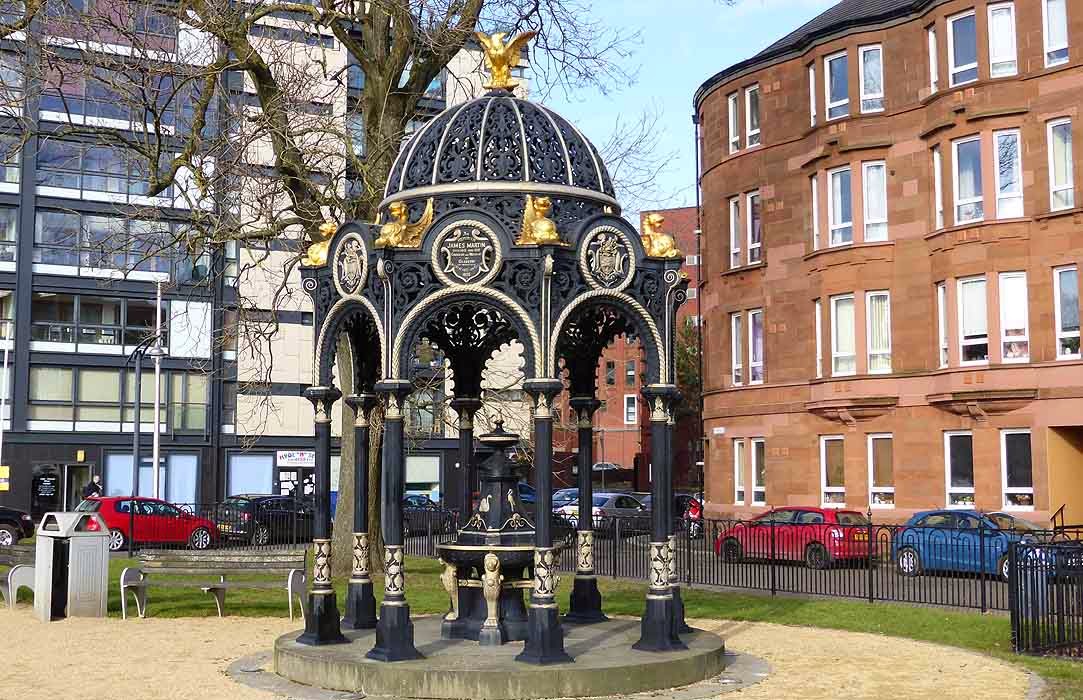 I however was on a trail of my own. I worked all over the east end years ago in every district and was just curious to see how much had changed in the decade since I'd last visited these areas. As I live on the other side of the city now I don't get over here that much. Ballie James Martin Drinking Fountain looking resplendent, newly restored. This is just beside the carpet factory. 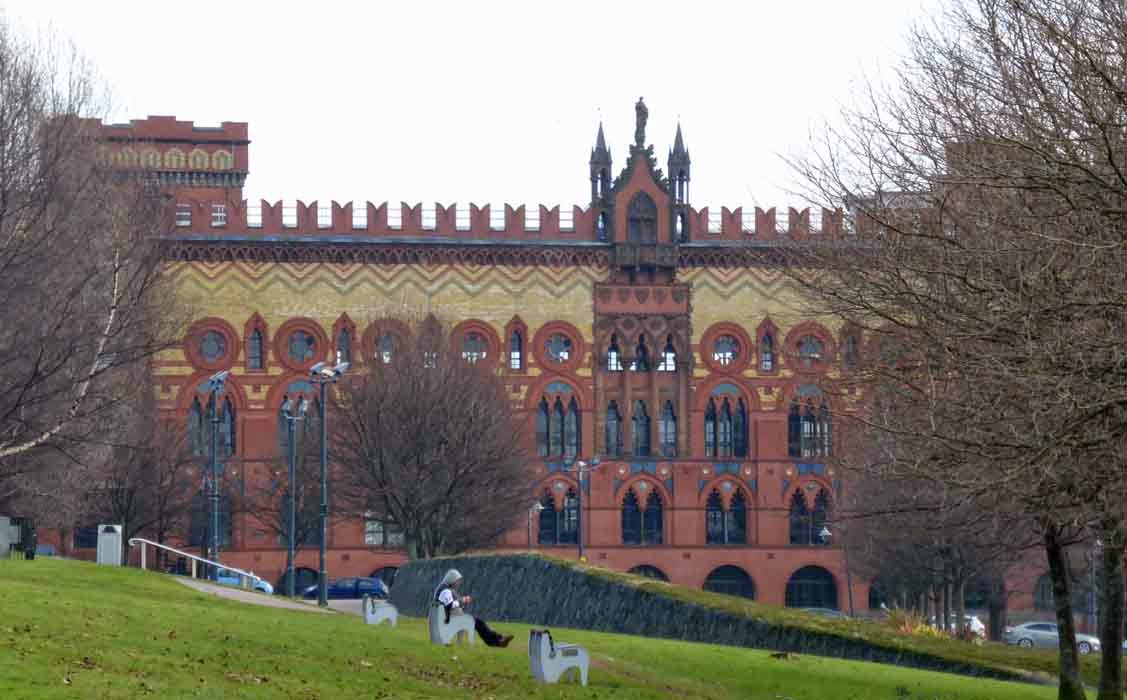 Another view, side on. 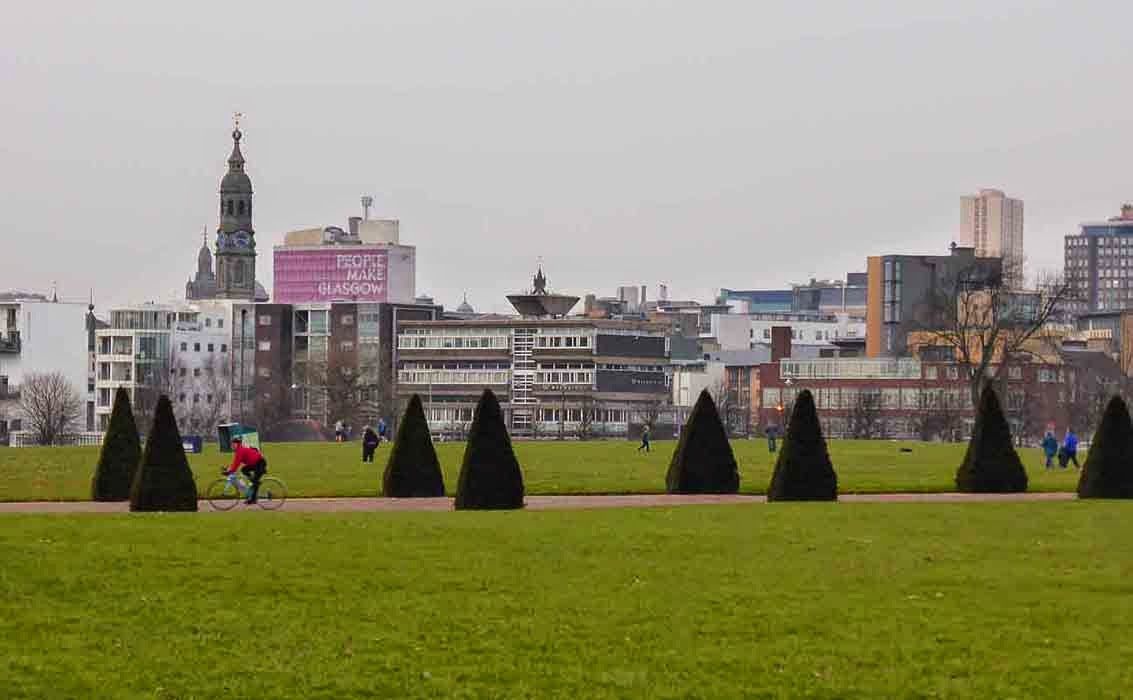 Cyclist in park. Glasgow Green is ideal for cycling and a network of trails now link across the east end which has seen many changes. I'll need to cycle around here more often as the place has totally changed in ten years. 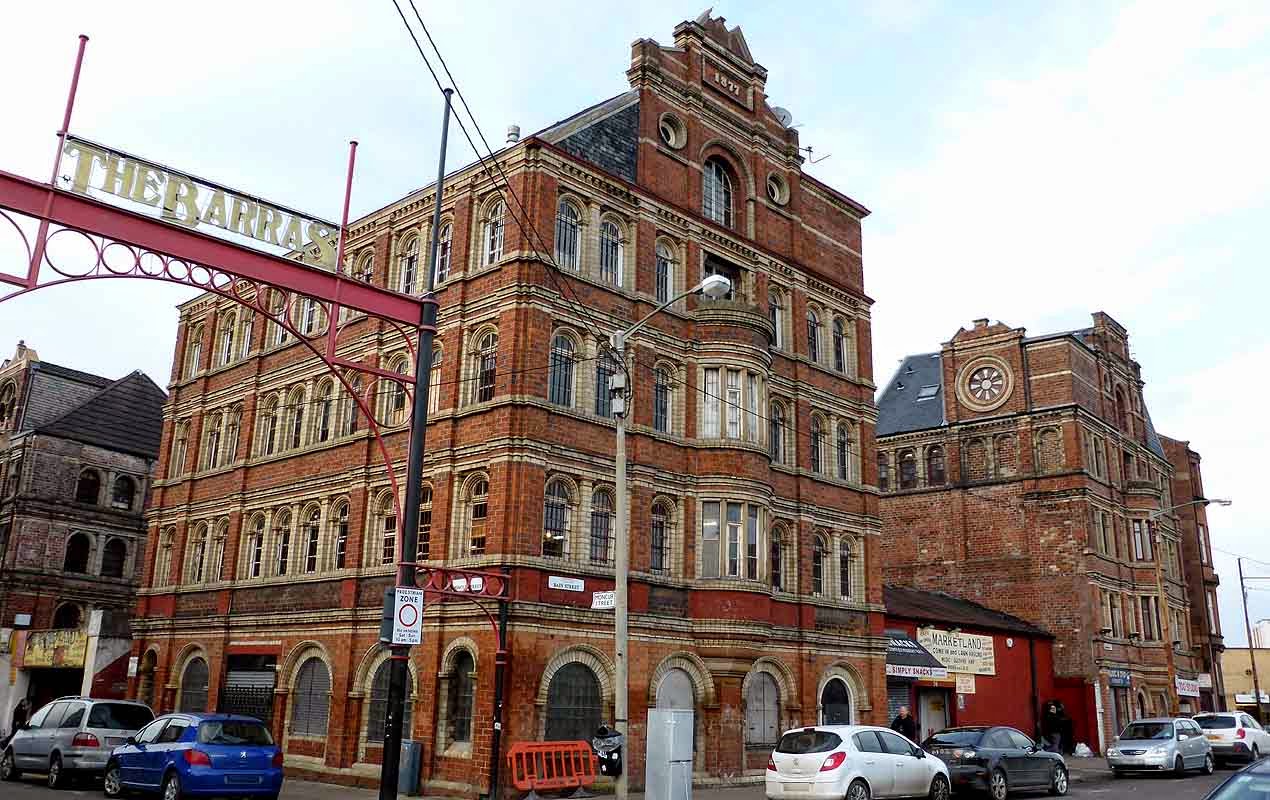 The Barras Market and the ancient Clay Pipe Factory. Note the date near the roof. Clay used to be scooped out in this area for making the pipes. 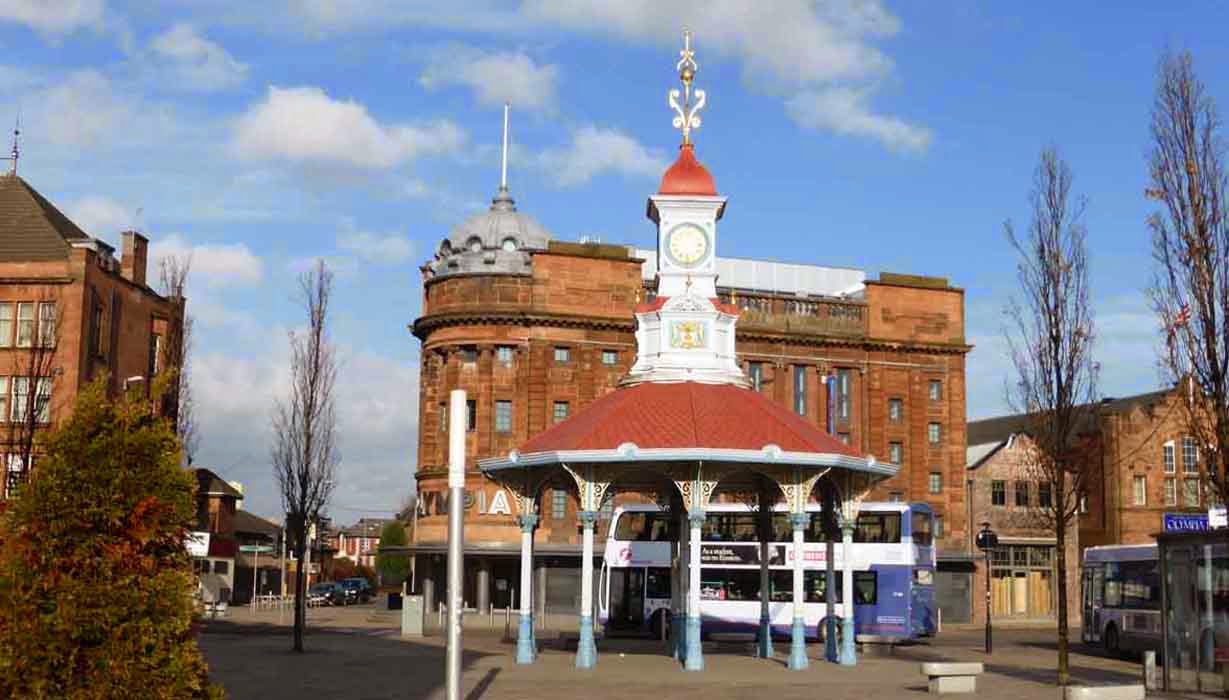 Bridgeton Cross next following the cycle track on foot from Glasgow Green. Looking very smart and clean on a sunny winter Sunday afternoon. Bridgeton that is, not me. I'm still a scruffy git waiting for my own makeover. Olympia building behind. When I was watching the film portraying the early days of late 1800s New York- "Gangs of New York" a few years ago I was struck by the similarity to the sectarian conflict in Glasgow's east end around the same time. Interesting if lurid account here of life in this part of Glasgow then.
http://www.thefreelibrary.com/BLOODLUST+OF+THE+SCOTS+GANGS.-a096233237 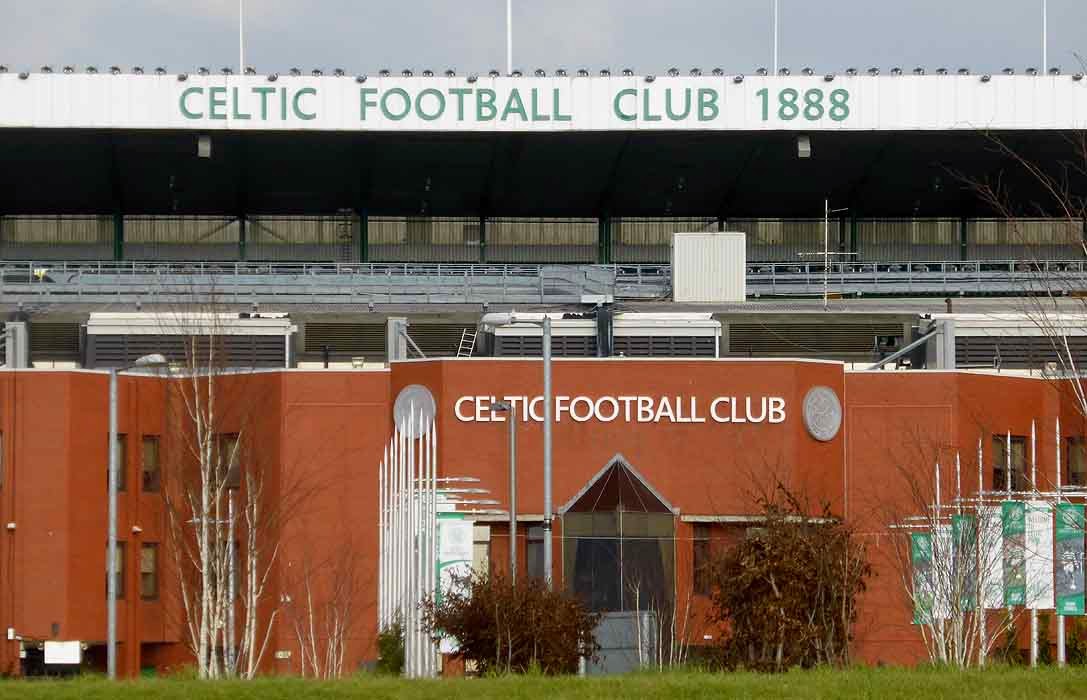 Celtic Football Club. In the interests of fairness I have posted photos of Rangers FC and Ibrox district as well in previous posts and as my main interests are mountaineering, urban adventures around Glasgow, and photography I,m keeping neutral. Best way to start a fight in any city is to talk about football clubs :o) 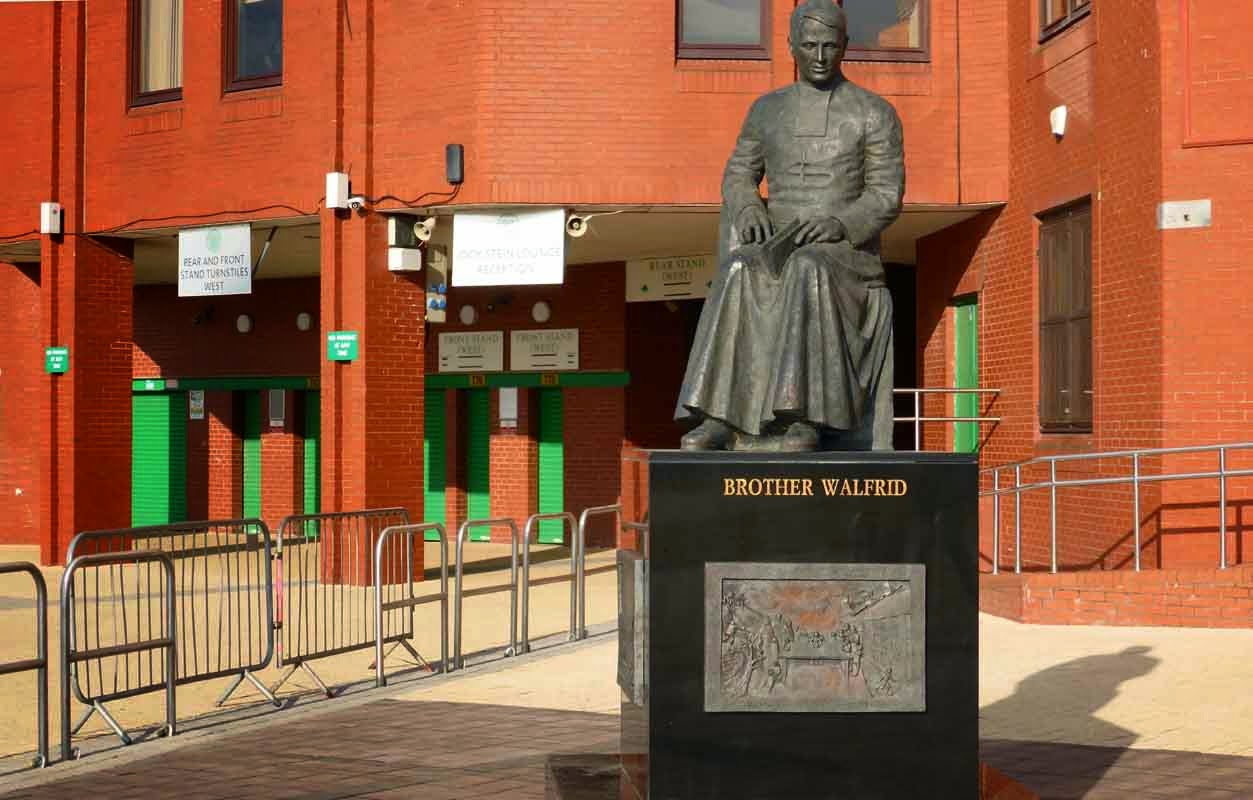 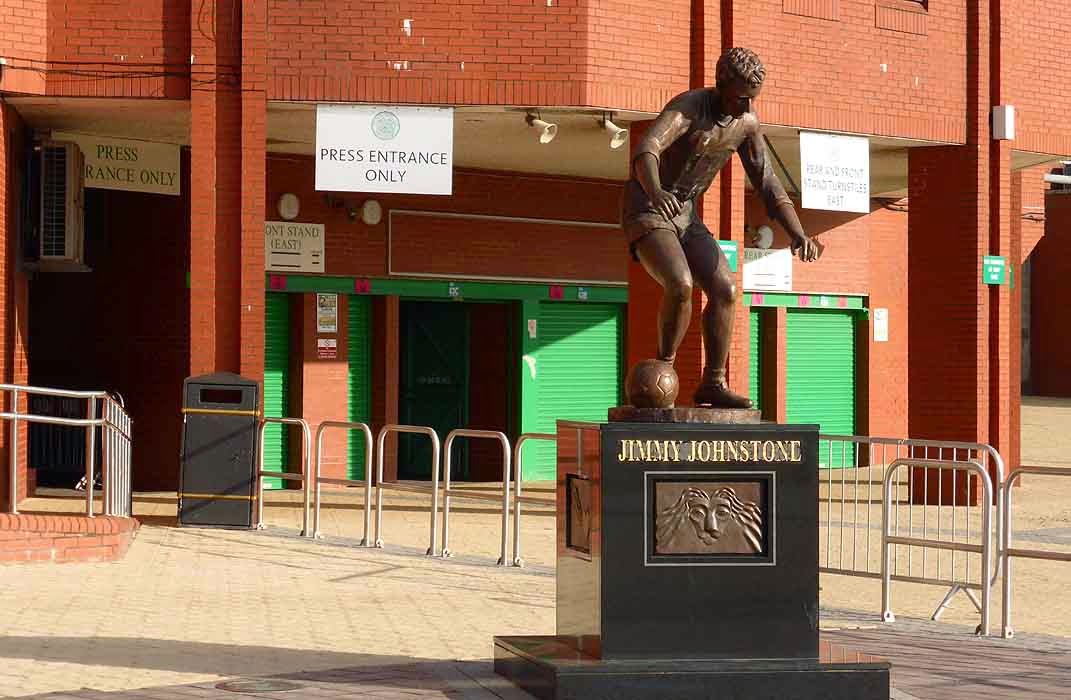 Jimmy Johnstone.
I've been here before of course but it was the new building on the other side of the road I was interested to see as this area has been transformed. I used to work occasionally in the old Barrowfield estate in the 1970s-1980s when all the tenements were still standing. An exciting place to be on a summer evening. The east end has changed a great deal from the bad old days. Although residents will always look back fondly at the good things in their childhood I still remember the apprehension as a teenager when my gaffer at that time, who grew up in the east end of Glasgow and thought nothing of it as this was his own area said we would be working around Easterhouse, Garthamlock, Blackhill, Bridgeton and Barrowfield. As a young apprentice from the south side of Glasgow, although brought up in a large council scheme, this was still a daunting prospect as this side of the city had a grim reputation. The weird thing about the old Barrowfield was that instead of gangs having separate areas, estates apart from each other, it was divided down the main street despite being a relatively small scheme.
A glimpse of a Glasgow that no longer exists. Maybe that's a good thing for youngsters growing up today.


Although we are in the middle of a UK wide austerity drive at the moment there's much better housing and social conditions now in Glasgow so it would be a shame to see it slip backwards after all the hard work. This area is only now recovering from many decades of urban decline in its past. 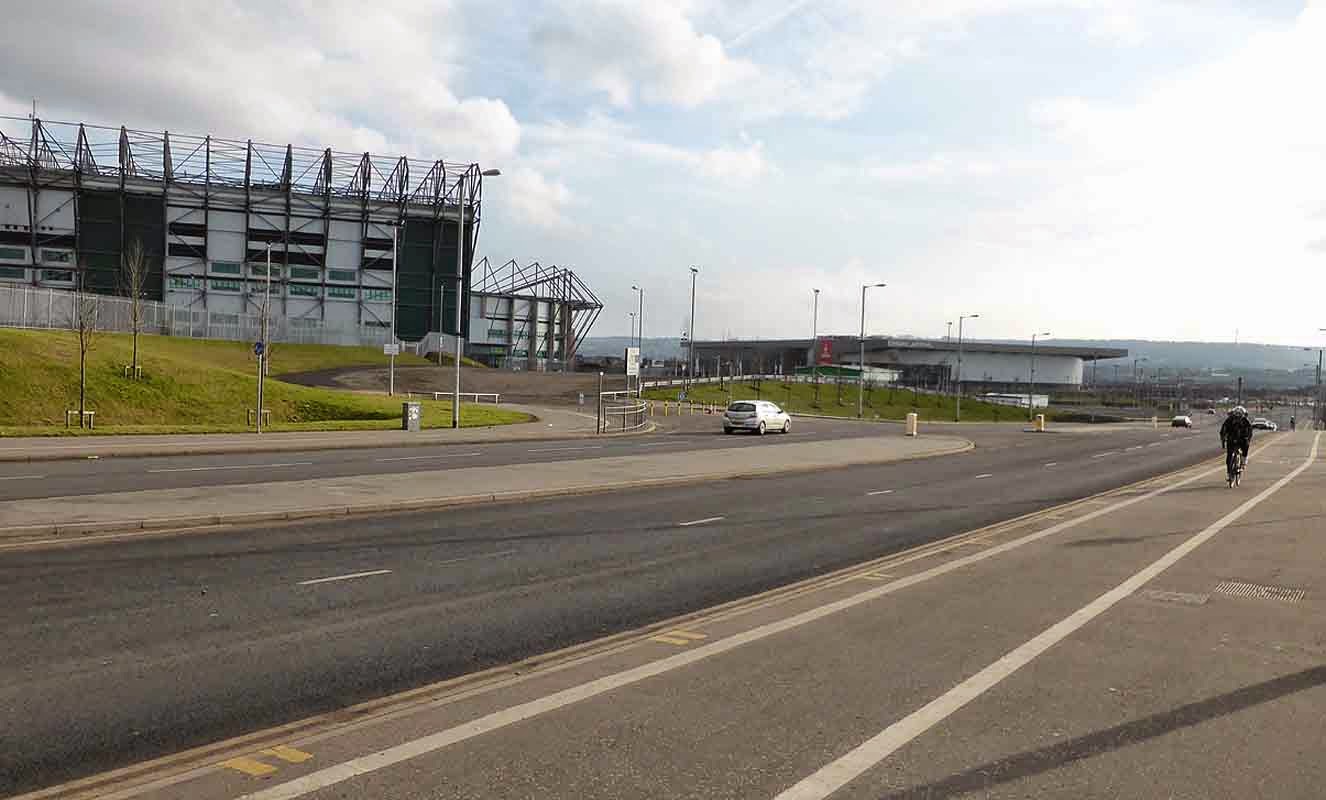 Hardly recognized the place. Very open plan now and modern new build flats have replaced the rows of old tenements. This is the cycle track leading up to the nearby Forge Market from Bridgeton Cross and Glasgow Green. Good views now over Glasgow and a small cone shaped hill/ viewpoint is being built here by the looks of it. 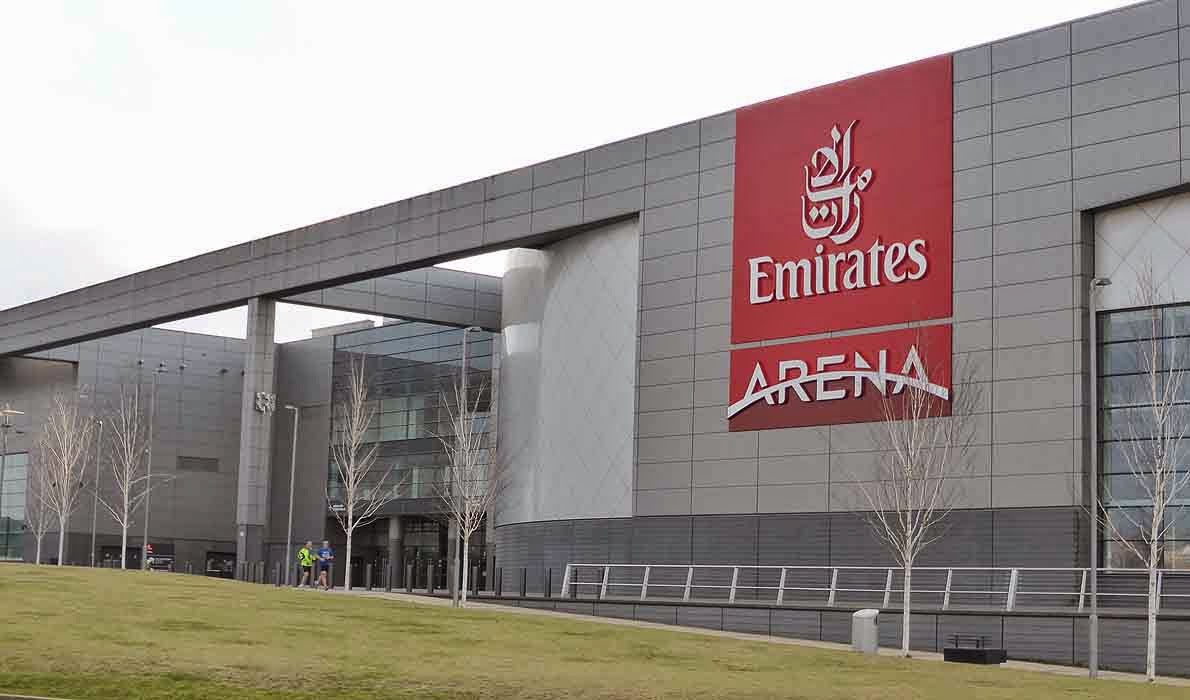 The new Emirates Arena and Sir Chris Hoy Velodrome sits right beside Celtic Park. Both popular stadiums for joggers to run around as you can see for miles in every direction which you couldn't really do before. What a change in this area! 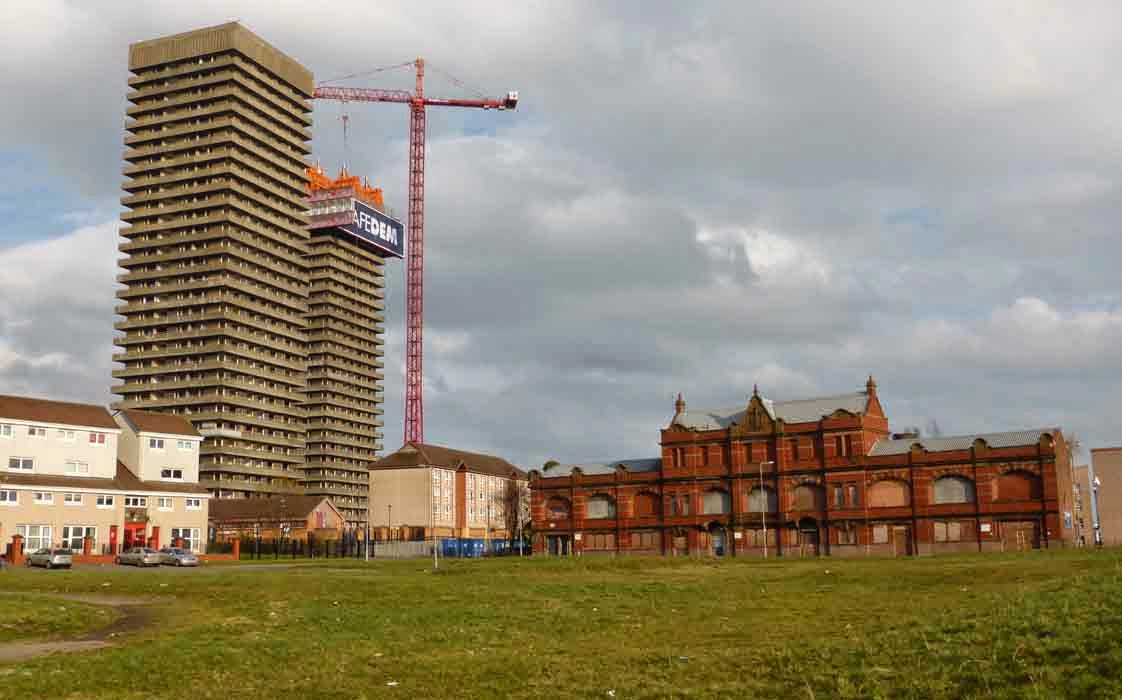 Everyone thinks the Red Road Flats are the highest in Glasgow but the Whitevale- Bluevale pair, seen here are the highest tower blocks in Scotland at almost 300 feet high. This is them coming down floor by floor. The old Whitevale Baths building on the right. 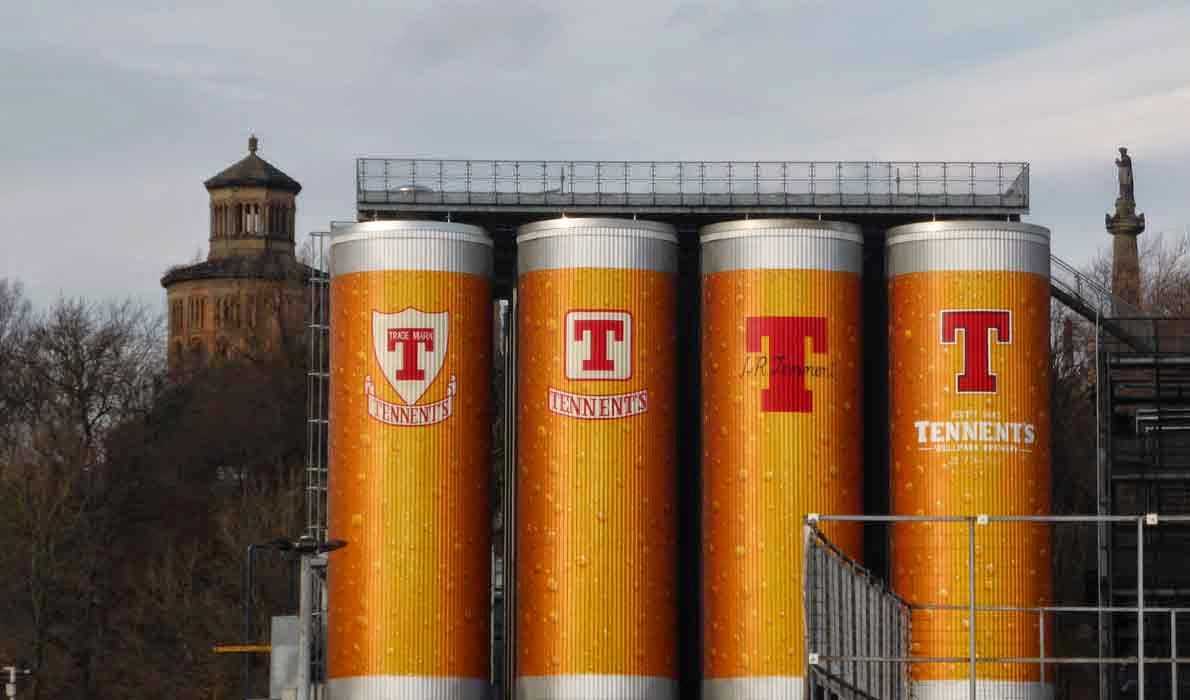 My next stop was to walk past the Tennent's Lager Wellpark Brewery. My drink of choice years ago in pubs but I don't drink much at all now. My car does most of the drinking for me nowadays, in petrol, so there's very little money left for poor Bobby :o( Very few traditional pubs left either come to that :o( 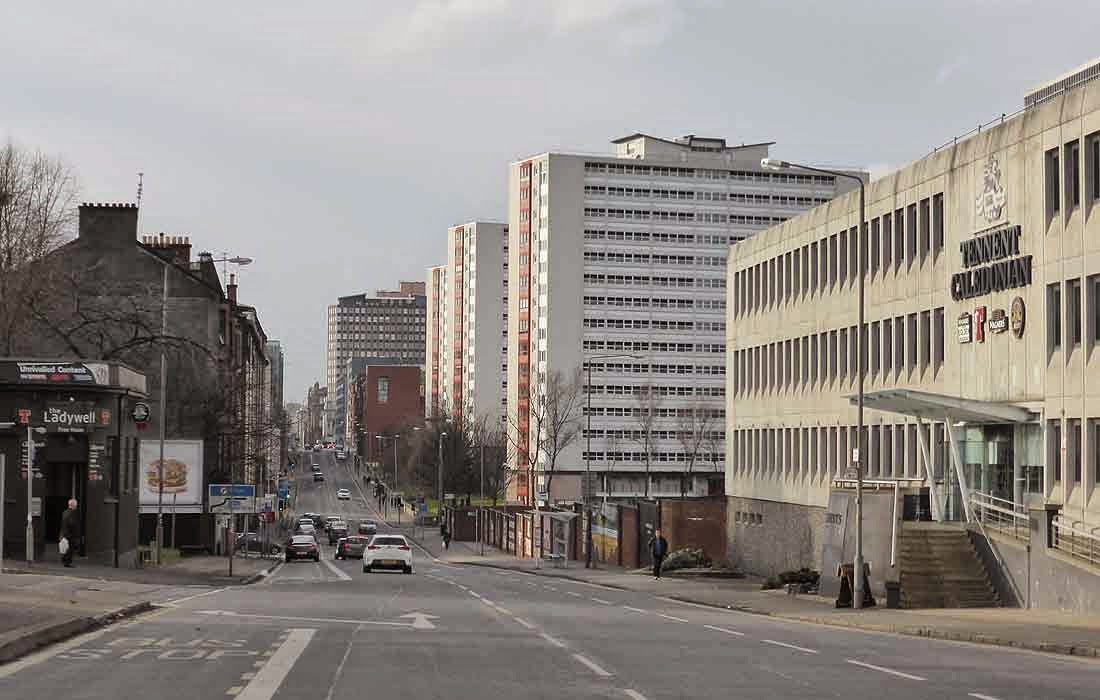 Looking down Duke Street from Tennent's Wellpark Brewery towards the city centre. This used to be a very uninspiring dark road in the old days trundling up it on a bus but it looks much cleaner and brighter now. One of the longest streets in Britain as it slices through the heart of the east end. The Royal Infirmary and Glasgow Cathedral from the Tennent's Mural Wall. 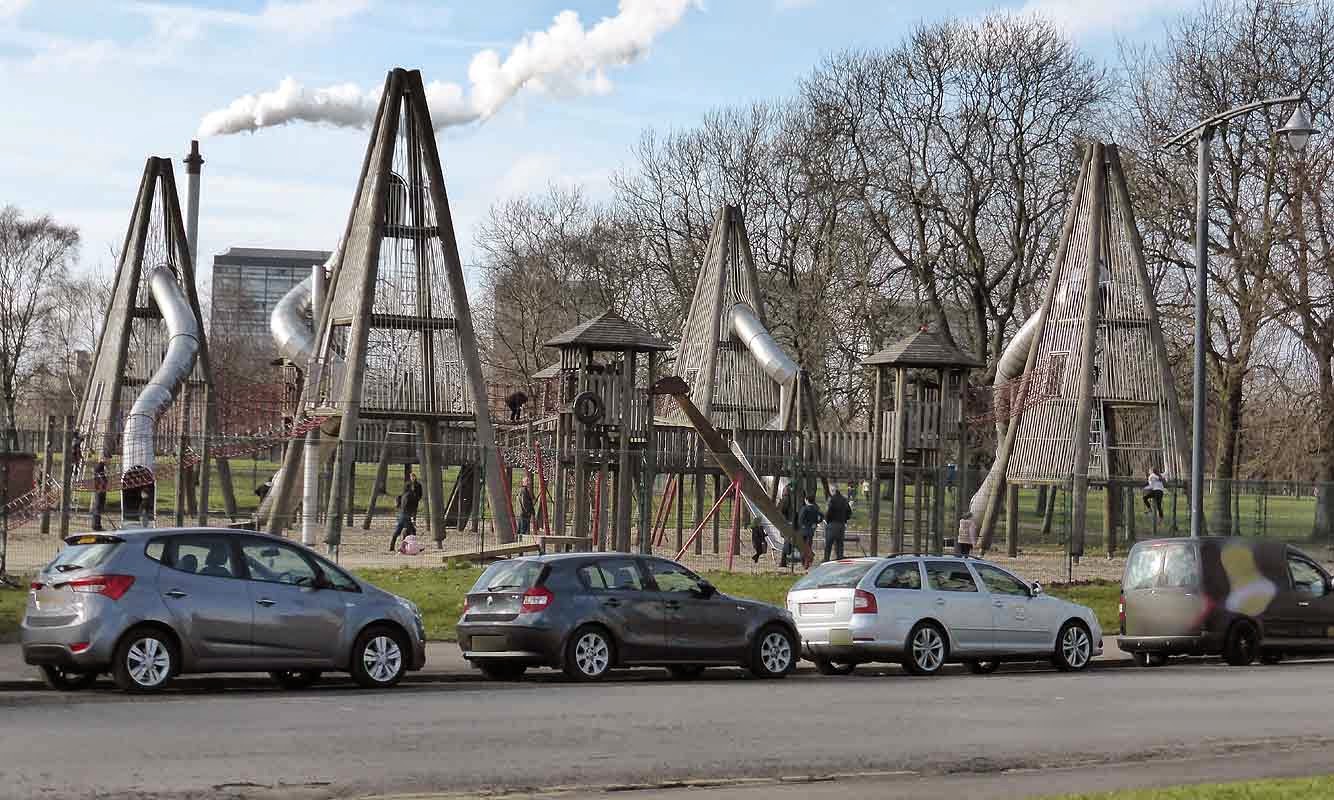 A last view of the large adventure playground in Glasgow Green. I,m not in the habit of taking photos of playgrounds but this one looked so good I fancied a climb on it myself if it was deserted and empty of people. Why didn't my generation have these as a kid?

A video of an illegal and very dangerous free ascent of Shanghai Tower. At 650 metres the second tallest building in the world. They even climb through the cloud level here, Jack and the Beanstalk fashion. Strange how governments worldwide are using the internet to control, modify and generally find out as much as possible about individuals habits and personal information yet the more they try to wipe out any element of risk and control peoples health and encourage cutting out bad habits (restricting smoking, drinking, promoting healthy eating ....nanny state interference etc) the more the daredevils in society do things like this :o)


Link to my comedy adventure novel Autohighography about Glasgow and Scotland here and also my other book  A Guide to Walking and Cycling around the River Clyde and the Firth of Clyde with over 80 routes and 148 original colour photographs. First couple of chapters of each free to read here.
http://www.amazon.co.uk/gp/product/B00JNAIGAO/ref=s9_simh_bw_p351_d0_i1?pf_rd_m=A3P5ROKL5A1OLE&pf_rd_s=center-1&pf_rd_r=1V4SW68PBJ1RJZNH0GS2&pf_rd_t=101&pf_rd_p=582968727&pf_rd_i=341689031

The scheme video was very interesting. I notice the girls had a lot more sense than the boys! ;-)
Carol.

That's usually the case. I liked how clothes and hairstyles reflected the period. (1970s at a guess)
The youth of today have a more manicured, style and celebrity conscious appearance, especially the girls.

A cracking tour Bob. Some fine pictures.
In the one of the fountain, there's a strange character to the right beneath a street lamp. Am I seeing things or is it a hoodie with big bulging eyes ?
BTW, I was fascinated by the final chapter of Autohighography, not at all what I was expecting !

Hi Jim,
As far as I,m aware it's just a normal person captured in mid hood adjustment.
As regards the book it's probably more complex than people think hence the partial explanation in this weeks blog post.
Same technique...start with real people and then gradually morph them into characters in a book.