Three Glasgow Parks. A Rainbow in Flowers. May in Colour. 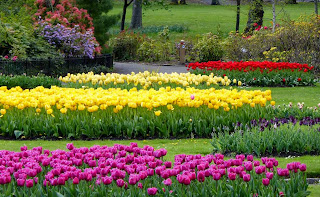 ALL PHOTOS CLICK FULL SCREEN
My annual tribute to "Spring" and also the Glasgow Parks and Recreation Dept who work tirelessly throughout the growing season to cheer people up with a cracking display of colour. Even if you are depressed about anything surely a visit to a park during spring or summer, with seasonal displays in the flower beds must lift your mood a little. And it is a free display...for the moment. Victoria Park Tulips. 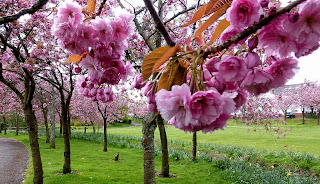 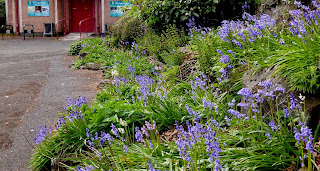 Bluebells in Victoria Park next to the Fossil Grove. 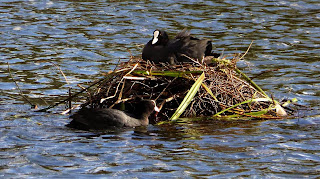 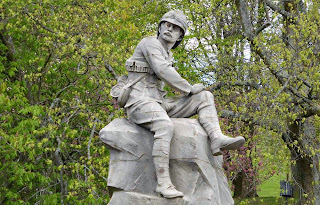 Kelvingrove Park. One of Glasgow's older parks with many statues relating to the Indian Subcontinent, Glasgow University nearby, and days of empire. With the latest election results an Independent Scotland may yet become a reality as Scotland already seems to be on a different path from voters in England in a major way. 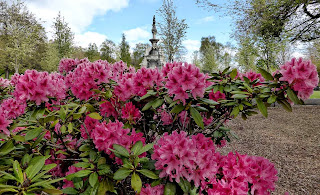 Kelvingrove Park again and the fountain. 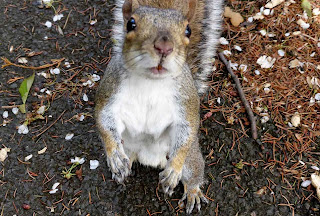 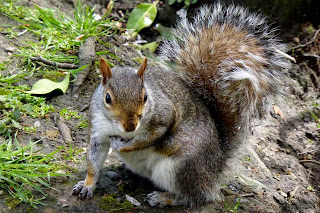 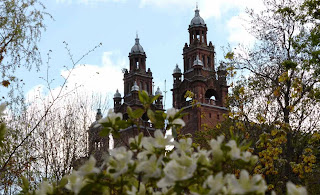 Kelvingrove Art Gallery and Museum. Could well be a temple in India.

One of the back walks along the River Kelvin. 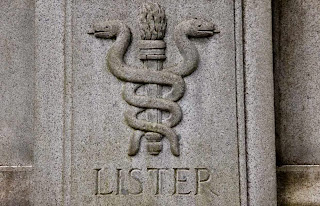 A detail on the statue to Joseph Lister in Kelvingrove Park. Eminent medicine man who made great strides developing techniques to cut down infections with antiseptics.Although from the Home Counties he worked in Glasgow and Edinburgh. His statue sits not far from Lord Kelvin's. The snake symbol around the pole goes back to Greek mythology. Many everyday symbols have ancient origins which may have been changed over time. For instance Isis ( Mother Goddess of magic and fertility) holding the infant Horus in her arms comes down to us today as the familiar image of the Virgin Mary holding the baby Jesus. Many Christians are unaware that Mary is actually based on the earlier pagan deity.
http://en.wikipedia.org/wiki/Joseph_Lister,_1st_Baron_Lister 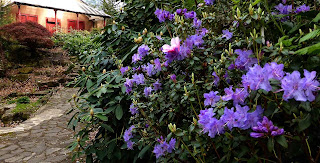 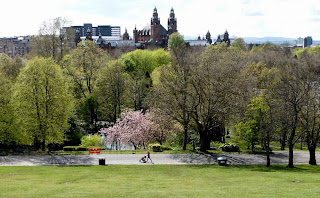 Kelvingrove. The pond. A modern Isis. All religions borrow from the ones that came before to persuade their followers to convert to the new model. 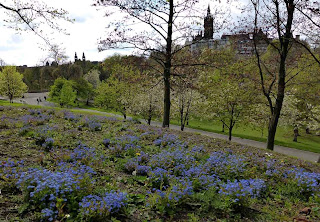 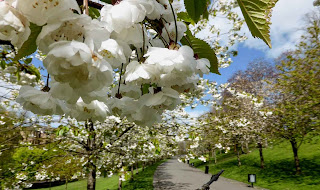 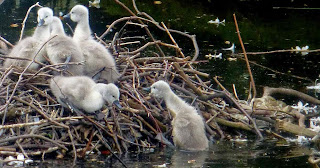 Getting in is easy... getting out is hard! 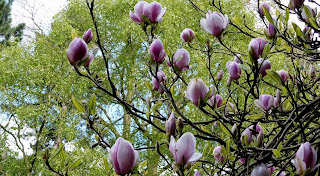 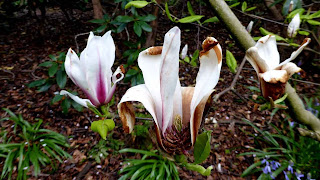 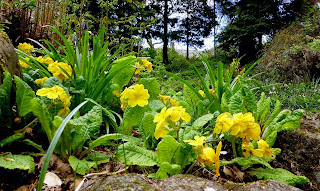 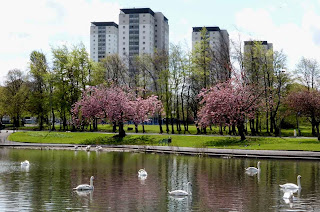 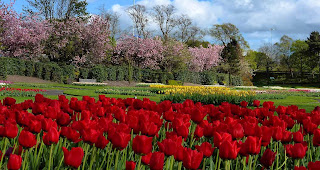 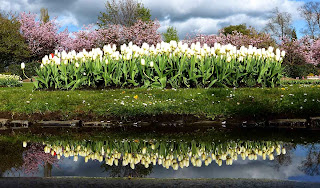 Reflections in a puddle. 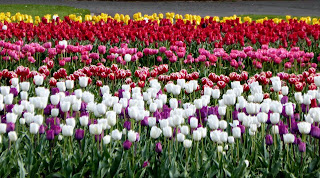 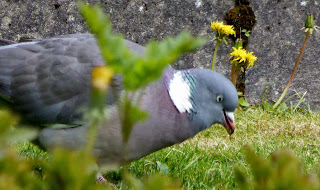 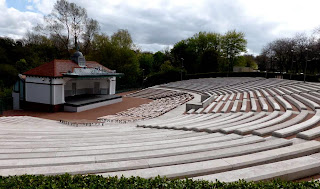 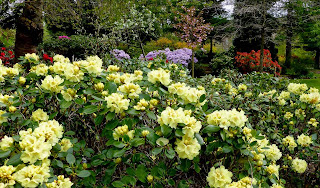 Scotland seems to have a perfect climate for Rhododendrons and all the parks have a multitude of specimens in a rainbow of different colours. 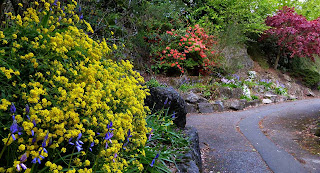 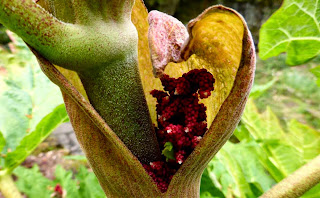 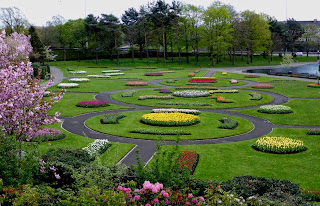 As I wanted a post filled with beauty, interest and colour I'll leave the pop culture influence video until next week and give you this instead as it's more in keeping with the rest of the post. Still out in mother nature( our old friend Isis again?) in all her glory these girls are currently touring throughout the UK. Wider public acclaim surely cant be far off now. Accomplished songwriters, guitarists, and vocalists with great harmonies they seem to have the full package. Mind you I said that about the wonderful Alisha's Attic who folded after three brilliant albums packed with catchy tunes. Often it's the middle of the road unadventurous stuff that sells best.

Wonderful photos. Have a good weekend :)

Hi Linda.
Thanks. My favourite month of the year. Two official holiday weekends.

Cheers Anne,
Same to you as well during the rainbow months of summer... if we get one :o)

As always Bob, cracking photos.
Me and Rose appreciate your good wishes. It was her idea to thank you.
I was going to say I'd spread the news of your brilliant blog down in the Antipodes, but I've a feeling you've already got quite a following down there.

Hello Jim and Rose,
Hope you have great times together.
Any publicity is good publicity. I,m handing out cards to anyone I meet on the hills but I've already found out that the hardest part of book writing is getting anyone to notice or read them. Think I,ll be pushing a boulder uphill the rest of my life in that respect as even Herman Melville, (Moby Dick),a book often quoted as one of the great books of American literature had to give up writing and return to the day job to earn any real money. I'm not in his class and have amassed the grand total of £50 in two years with an outlay of income many times that. I've spent £50 just in publicity material in the last two months alone...cards, flyers etc, so I cant see me joining J K Rowling and Jeffrey Archer in the Bahamas any time soon :o)
Spent the last months most nights re-reading and re-editing the Firth of Clyde book and Autohighography and my third book, all about Glasgow, will be out soon. God loves a trier!
A volunteer is worth ten paid men :o) Thanks for offering....

Wow, what beautiful flowers. How I would love to see those gardens.
The pagans do not have a monopoly on mothers, you know! :-)

Absolutely glorious Bob. Stunning colours. I thought that the Inverewe gardens were worth visiting at this time of year but this is equally as good.

Hello Kay,
Most of the city parks are pretty special in April and May. Once you plant the flowering shrubs or bulbs they come up every year if left undamaged. Hope the next five years of budget cuts and austerity punishments we can look forward to doesn't impact on the parks too much as they are an easy target in the current climate. There has already been proposals to shut or build on the less frequented ones in the past.

Hello Neil,
Yes, I've put the legwork in over the last five years and now know when to show up to capture the best displays during a short 3 week window and also the best places to visit. It,s the guys who spend ages on their knees planting all the beds up every couple of months to give us these displays that deserve the credit though. Low paid but they are artists with wheelbarrows for palettes.

Was just talking to a friend and we're gushing about how beautiful flowers are. Like nothing human can create could compare to its beauty. These are pretty pictures. :)

Cheers Lux G,
The Tulips are lovely this year as we haven't had any major storms in spring. Some years they get blown over if it's too windy for them and loose their shape

"My favourite month of the year. Two official holiday weekends."

I'd ban Bank Holidays personally and add the days onto everyone's holiday allowance - the chaos on the roads is just inexcusable - both from an environmental and a safety point of view!

Rant over though... beautiful photos - I love flowers, especially tulips. They just won't grow in my garden though unfortunately - no idea why not.

I keep telling people who are 'depressed' that all they need to do is get out somewhere natural and pretty - among trees, flowers or to the beach - and they'll certainly be cheered. So many people get to the stage where they can't be bothered though unfortunately - my brother included :-(
Carol.