As I'm photographing close to 700 old photos taken over the last 50 years for a new book project I thought I'd put a few on here. In my puppy prime I was fairly active, having been in half a dozen or more clubs over the years. A group of us got into rock climbing during our Munro bagging decades and this is the result. I have posted some of these before but as I've put posts up in various club websites over the years I'm not sure if these have been on here before. 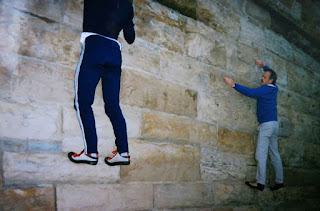 ALL PHOTOS CLICK FULL SCREEN.
Alex and John, two of my oldest friends, at the Finnieston railway wall next to the Glasgow expressway. With indoor climbing walls opening up in most cities this way of finger strength training died out around the late 1990s but folk had some good times here. It was free, outdoors, easy to get to in a car on warm summer evenings and I've even climbed here during a spring hail storm, brushing slush off the holds to get a grip. We were really keen then but it came in useful on the higher peaks, knowing how long you can endure cold fingers and testing your abilities. 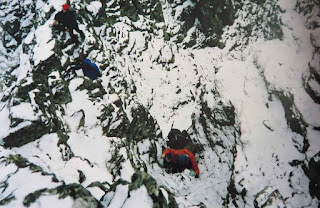 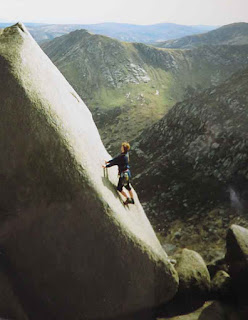 Alistair testing out his sticky climbing boots on a boulder. Not that sticky it turned out. 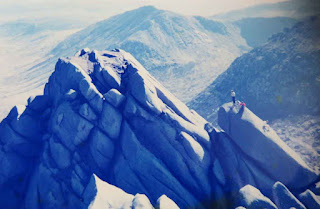 Climbers relaxing on the top of the Rosa Pinnacle on Arran after rock climbing on the vertical front face. 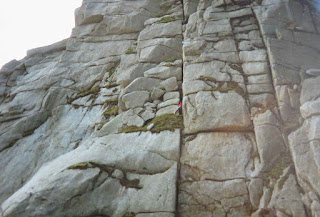 Climbing up one of the lower chimneys on Labyrinth, an enjoyable, partly subterranean rock route on Arran. You can see both climbers here if you look full screen. 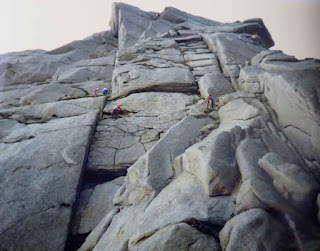 Higher up on Labyrinth, near the direct finish, a right sloping ramp just slightly to the right of the obvious middle corner/crack line. Small hole in chock stone visible. Exit route just right of the highest climber here if memory serves me still. An exposed HS although there is also a V.Diff line. An amazing route of great variety. 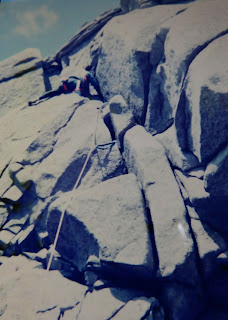 A rare one of me climbing on Arran. Even in those days I usually took most of the photographs! 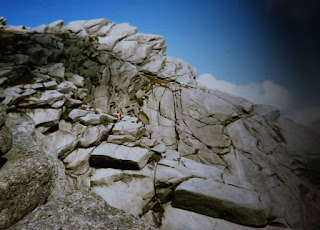 The superb granite cliffs of the Rosa Pinnacle on Arran. 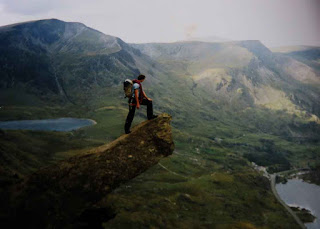 Me again ( my ego knows no bounds) shamelessly posing on the famous hanging stone in Wales. I think we must have been rock climbing on Tryfan, probably Grooved Arete, a great committing climb up a brilliant mountain. V.Diff. We were never high end climbers but we got around.
Good video of the crux pitch here once the camera stops jumping around at the start. Brings back memories this as I remember doing this route in the rain which started once we were off the ground 2 pitches up. I did this pitch soaking wet with Alex or Julian. I think I led the Knight's move pitch as I remember using my hanky to dry the crux moves in advance, something I would not have done, protected as a second.

This is worth a watch. Steep climb but with good protection. Polished in places but a classic. 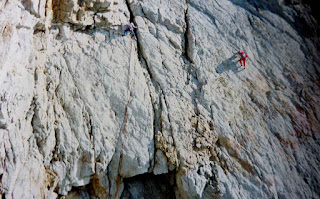 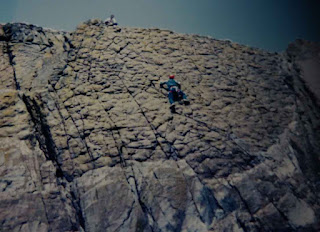 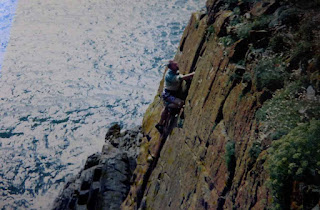 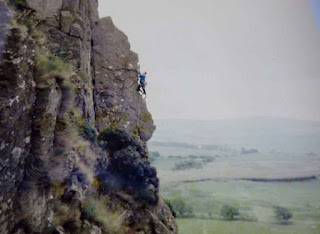 Brian looking for a runner on the Edge. VS. Loudoun Hill. 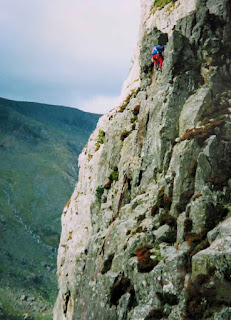 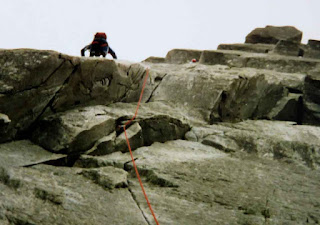 Wales again probably. We used to go there every September weekend as the rock climbing was usually better with a half chance of decent weather being further south. One year we climbed a few routes in snow and hailstones, which started halfway up the climb. Didn't like that as much, funnily enough.We climbed in Cornwall after that. Always chasing the sun, even then. 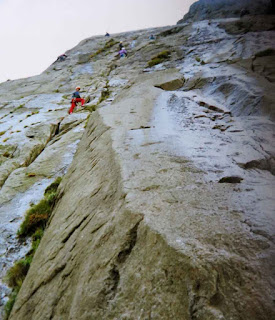 Hope. V.Diff. Wales. As well as bagging Munros we were also ticking our way through Classic Rock which featured the best easy grade climbs  across the UK. Ticked off quite a few as well but never finished them sadly on our limited budgets for fuel and getting free weekends away. Great fun trying though. 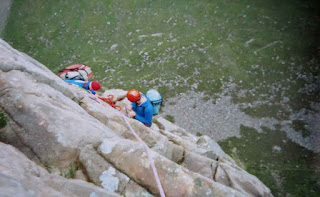 Cioch Nose. Applecross. 450 feet V.Diff. This photo gives no idea of how high up this belay stance was. Very airy climb and a lucky one as the rough sandstone dried out quickly after rain a couple of hours before. Hope, above, dried out quickly after heavy rain as well. One of the reasons we went to Wales at the end of the climbing season as we needed loads of bare clean rock that might dry quickly in autumn winds. Didn't always work though. 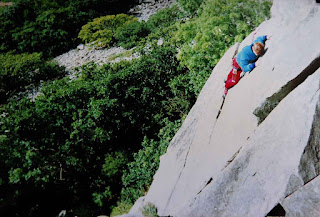 Eric high up on Creagh Dhu Wall. Tremadog.Wales. HS. The toenail traverse I seem to recall. 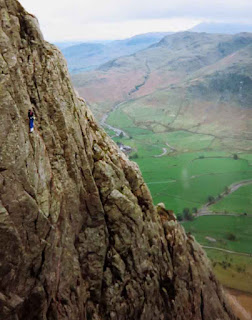 Somewhere in the Lakes or Wales, judging by the scenery. Cant remember the  route :o) It might be Gimmer Crag as we did a few routes there over the years. 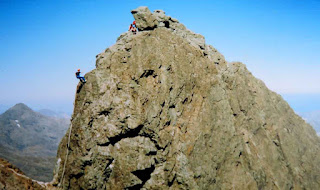 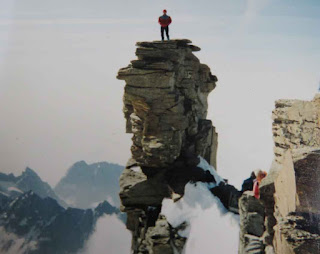 Scrambling on Gran Paradiso. Italian Alps. A 13,323 foot Inn Pin. Highest peak within Italy and an "Ultra." Still the most beautiful summit I've been up for views and I cant believe I scrambled up here without a rope when you see where it is on the mountain summit and the angle it's leaning at. First photo in this link here. I was either brave... or just really stupid... in those days. Ye Gods!
http://mountainsrivers.com/2014/08/31/return-to-gran-paradiso/
Obviously, if you are into mountaineering, like us then, you don't need ropes and guides. Just a postcard with a dotted line showing the way up. Worked for us anyway in the alps :o) 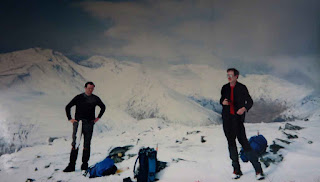 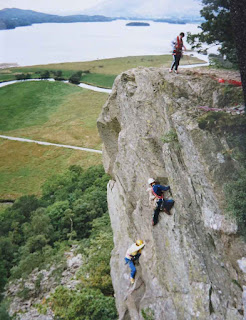 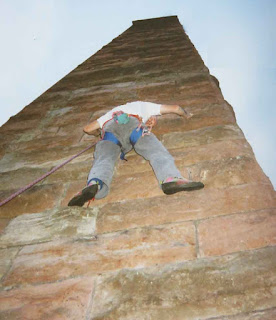 Anyone wanting a glimpse into that era when we did Rock Climbing, Kayaking, Skiing, Caving, Cycling, Munro bagging, Back packing, Bothying and Island bagging it's all in this book.
Autohighography. Bob Law. £1:14 pence on kindle A humorous account of the early years from the 1960s to the 1990s. Set in Glasgow, Scotland and Europe. Part Autobiography, Part love story, Part travel guide, Part hidden novel. First three chapters free to read here.
http://www.amazon.co.uk/s/ref=nb_sb_noss/280-0559125-0737611?url=search-alias%3Ddigital-text&field-keywords=autohighography.+Bob+Law.

Wow. I have never wanted to climb like that, perpendicular!
Oh well, I have never been the adventurous type but you see more wildflowers the way that I climb mountains!

Wow you were a climbing badass! I'll bet it was fun to go through those old photos and reminisce about those adventures.

Hi Kay,
I couldn't do that sort of thing now though. Not got the head for heights any more.

Hi Linda.
It was fun for the first 300 photos then it was "When will it end?" as I kept finding more. Lost many of the best ones when my computer crashed without warning a few years ago taking the hard drive with it and some of the digital climbing collection. Great memories but I'm not the mountaineer/hillwalker I used to be :o)

I thought I'd taken up outdoor rock climbing but, looking at some of those, I'm never going to be doing anything like some of the higher and airier of them!

Hi Carol,
Alligator Crawl is well named as it looks like real skin/hide and you have to move at a snail's pace up it on small holds. It is not far off vertical at the top and feels it. Nice route.
I've added a good video of Knight's Move on Tryfan. The crux pitch up a smooth slab high on the mountain. Best watched full screen.

Gosh I'm looking at these photos and it's like my sole is tickling or something. Oh those heights.

Some cracking pics there Bob. Especially the one with the Clint Eastwood lookalike soloing the Rosa Pinnacle! :)

Is that me in the blue again on Little Chamonix?

Looking forward to the new book

Hi Lux G,
At the time it was within our abilities as you train up to that level and learn to think out the route and keep calm. Nowadays I'd just panic :o) Too old and too fat.

Cheers Alistair,
I think the guy on Little Chamonix was in a different club and was encouraging the girl through her first lead. Seem to remember he'd climbed the route and then down climbed towards her when she got temporarily stuck for the next move. Memory is a bit vague though as it was two decades ago or more.
You might get another retro surprise when I reveal my new purchase... if I survive.

Thanks Andrew,
It's good to look back on and remember younger times.