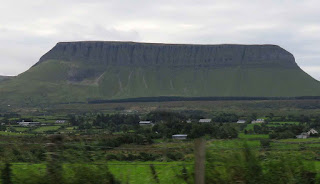 ALL PHOTOS CLICK FULL SCREEN
Benbulbin, 526 metres, in County Sligo, passing through on the way to Mayo and Achill island. We climbed this hill and the nearby Ben Whisken on one of our other trips. 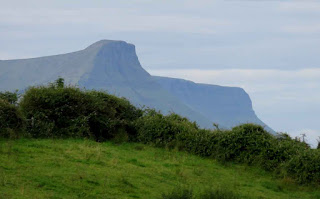 Ben Wisken, 514 metres, and the standing wave cliff. Both great mountains and part of the Dartry Mountain range but if you fancy doing these hills it's advisable to look up current walking routes as land issues can sometimes be a problem here and its best to know what routes are available, if any, to reach the summits. A description of our ascent, which was up a minor road between the two hills here.
http://blueskyscotland.blogspot.co.uk/2013/02/benbulbenbenwiskendartry.html
Although I've only had experience of hill-walking in the north and middle section of Ireland my favourite mountains so far are the limestone cliffs of the Dartry Mountains and the granite tors of the Mountains of Mourne as the two best hill ranges I've been on yet over in Ireland. 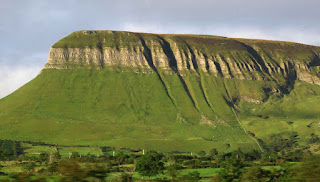 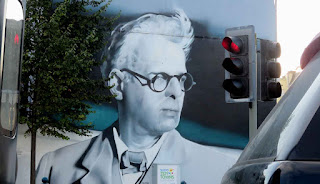 Sligo is of course W.B.Yeats chosen county and he is buried in a churchyard in Drumcliff near Benbulbin. A recent mural of the poet, writer and Irish senator on a wall in Sligo Town. 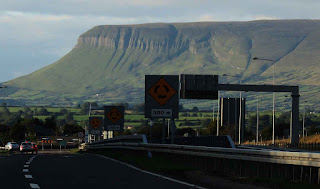 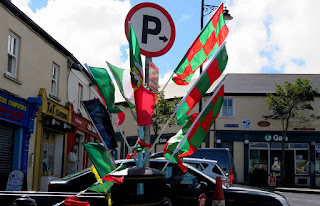 After Sligo comes County Mayo and you know you have crossed some invisible boundary because the colour of the flags change. The Republic takes its county boundaries seriously and almost every house has flags out, either for the County itself or for the local football team. On my first visit here I was extremely puzzled to see signs in every village and town asking the locals to "Bring Sam Home." At first I thought it was an Irish TV celebrity I'd never heard of yet that kept getting lost on the way back from the pub.
https://en.wikipedia.org/wiki/Sam_Maguire_Cup 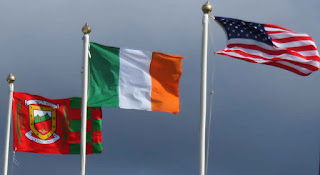 Even local businesses get in on the act with flags flying everywhere. It's much more colourful than Scotland as the Irish don't seem afraid to use bright colours to paint the outside of their houses and shops. We prefer grey and white for our cottages and shops which can look dreary and depressing on a dull or rainy day. 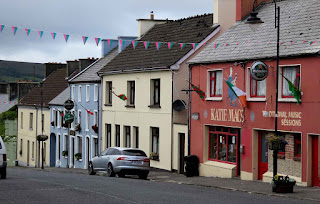 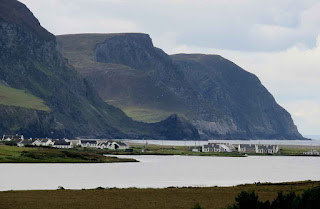 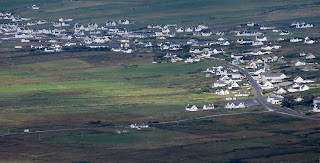 Tightly packed houses on Achill Island, part of the Irish speaking community here- The Gaeltacht, although some of the houses are now holiday homes. 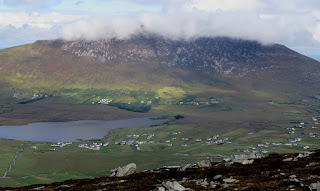 A view of Slievemore and Achill Island, summit covered in cloud. 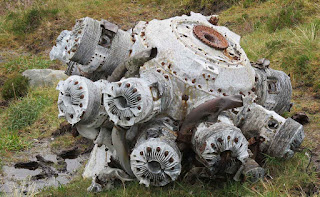 Crashed RAF plane debris on Croaghaun. An accident in thick mist in the early 1950s which led to the death of everyone on board. While we were on the summit of this mountain it was completely obscured by sea mist several times without warning then cleared again to sunshine, a common hazard due to a high land mass sticking out into the unpredictable Atlantic. When we had climbed this hill, the highest peak on Achill Island, we needed some place to stay and Graeme and Alex recommended the Valley House Hostel. We found it down a minor road on the landward side of the island, a grand mansion built in the early 1900s and now a hostel with attached bar. 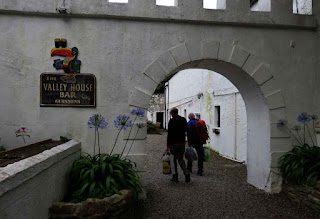 We were soon booked in where a pint and a pizza combo were advertised for 10 Euros together on a website deal, hence Alex and Graeme's enthusiasm. 19 euros a night to stay here. 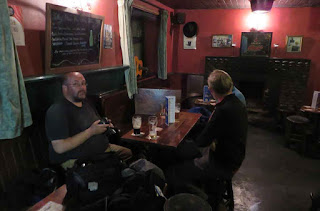 Graeme on the Guinness, us on the lager. Alex had his usual preferred meal of a pizza while the rest of us cooked in the kitchen as we had brought meals with us. We met a few American tourists and had a good night. 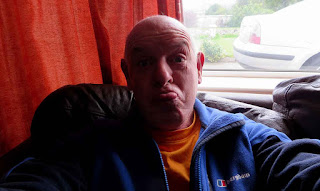 That fast bugger Alex nicked the low bunk which meant I had sore feet on the top bunk every time I got up to the toilet during the night... which was frequently. 3 pints late on was a bad idea. 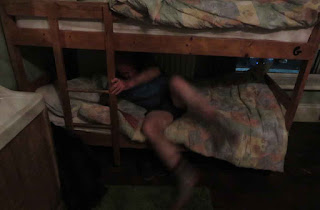 Me no like top bunks as I tend to have vivid dreams sometimes and roll about a lot and it's not the first time I've crashed out of bed in my own house, mentally escaping some dire predicament during the night. Those thin rungs are sore on bare feet. 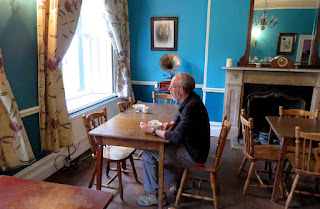 Bob at breakfast the next morning. Lovely spacious living room, common room and kitchen but a house of this size and age takes a lot of maintenance and upkeep and it was crumbling a little around the edges. A great experience though and a good friendly atmosphere. Nice pub as well with good conversation. 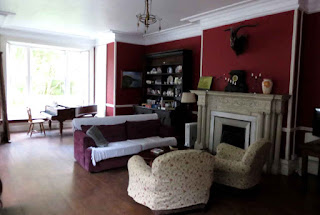 The main sitting room, plenty to read in the form of books and magazines, a guitar and piano, a nice light filled sunny room and a good help yourself breakfast of coffee, tea, fruit juice; assorted cereal and milk or toast, butter, and jam. Enjoyed our night here. 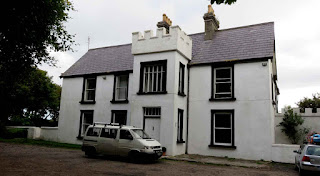 We left for another day of adventure with an early September chill in the air and a light breeze over the tree tops causing leaves to drift to the ground. A real first taste of autumn to come, arriving with the wind on Achill Island, at the western edge of Europe.

Those mountains are gorgeous! I'd love to visit Ireland.

It's a lovely country for hill-walkers both the Republic and Northern Ireland. So much to see and explore and you cant beat Ireland for history, mythology and creative imagination.

Looks fabulous - stunning scenery and almost jealous of what sounds like a great night. Impressive mural - Yeats' "When You Are Old" remains one of my favourite poems of all time.

It looks really weird seeing WB Yeats with a traffic light behind him! ;-)

I hate top bunk ladders too - they really do hurt in bare feet.

Those mountains look really spectacular. Not sure if I'll ever get over there though. You're fairly bunging the posts out - I can't keep up as work won't let me view blogspot on their machines any more :-(
Carol.

That impressive mural is a great tribute to an artist.
The view is spectacular as always.

Hi Mike,
Bet a lot of folk who haven't read it will still recognize the "but one man loved the pilgrim soul in you." line. That has been quoted 1000s of times and I first heard it myself in an episode of Morse or Lewis then looked it up out of curiosity.

Hi Carol,
The first 5 or 6 photos were taken from a speeding car as we wanted to get to Mayo and climb our hill the same day. Ireland is a big place when you only have a few days to explore and Donegal to Cork is like Glasgow to Cornwall as it's twisty roads in places and a lot of mountains in between.
I'm putting the posts out as I've a backlog and you forget things if you leave it too long.

Hi Lux G,
The murals in Ireland are impressive and the scenery is "grand" as they say.

Looking at those rungs on the ladder to the top bunk, it takes a brave man to scale them!

Hi Kay,
It takes a braver man to stride out bare footed across a dark room, going to the bathroom, then accidentally stand on someones upturned electric razor plug top. Not fun at all.