The Mountains of Corsica. GR20. Part Two and End of Trip. 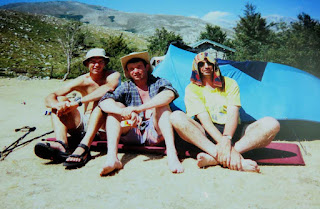 ALL PHOTOS CLICK FULL SCREEN.
Four days into our trip found us in the heart of Corsica's hot interior. For various reasons we left it late in the season for our visit so we were walking into August, long after any lingering snow patches had melted away and the streams were reduced to a trickle. Vegetation was also dried up and brown and any pools of standing water were either greatly reduced or gone altogether. I think it was also a sustained heat wave on an already hot Mediterranean island during our trip as not a cloud troubled the sky all the time we were there and it never rained once. Campsites were reduced to dust bowls and I'm wearing a dripping wet towel on my head to try and stave off passing out before my daily cold shower hopefully revives me. It was easily the hottest backpacking trip I've ever undertaken.
The reason I mention this is that I,m including a wonderful video at the end, of the same trip over the same mountains but in that journey, taken a month earlier, there are large snow patches under the high summits, it's very lush and green, and all the streams have abundant water in them. It could be two different countries entirely but going by the cloud cover in the video it may well have rained by mid afternoon some of the days which can be a typical weather pattern over European mountain regions in summer with late afternoon thunderstorms building up. Although I like the heat normally, this was under the grill temperatures every day from sunrise to sunset. 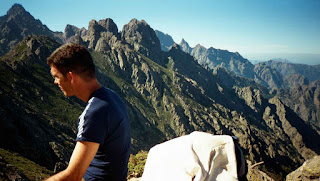 Contemplating the route ahead. Another day of superb ridge walking. 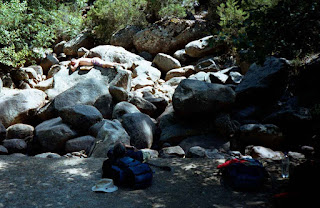 Sometimes by mid day we had no other choice but to rest in the shade for an hour of so until either a light breeze or slightly cooler conditions prompted a move. During our trip when we descended to a stream, often there was only a dry riverbed remaining. Mostly all water had to be carried with us from hut to hut but this did keep the walker numbers down and the huts were never as busy as the video suggests on the peak season trip. Swings and roundabouts. 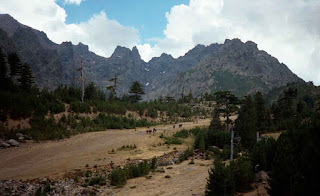 A photograph of the French army marching into the mountains to hunt Corsican bandits/ freedom fighters/rebels. This was the only time we witnessed troops heading off like this and with very heavy packs, twice the weight of ours, plus automatic firearms and other essential extras, I'm sure they were suffering in the heat as much as we were. The highest peak in Corsica, Monte Cinto, 2,706 metres, 8,878 feet, held only a few tiny patches of snow but in winter it falls in abundance here, hence the ski run and ski tows although the mountains are so rugged in Corsica the ski industry struggles to find suitable slopes at a reasonable angle for skiers.
At this point we came across our first road since starting the walk and Shime decided he'd had enough. He wasn't a rock climber back in Scotland and didn't fancy the notorious scramble across the Cirque de la Solitude which came next but as we were staying overnight in this road end hut, due to the small campsite being full with normal road tourists, we still had some time together.
In the morning, Scott and Gavin decided they had to climb the highest summit, which was a full 7 hour day but the rest of us didn't fancy it and had a relaxing rest, reading books and festering around in the valley, in the shade. They came back absolutely shattered and there was no way they were doing another stage the same day.
We also said goodbye to Shime (pronounced Shimmy) who was leaving the mountains behind and heading for the topless beaches and bars instead. He would go on to explore more of Corsica than us but only at low level, travelling around the coastal resorts by foot and local bus. 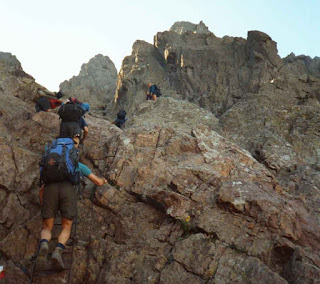 Day Five therefore saw us setting off again to do the hardest day of the trip... in a scrambling sense. The GR20 at this point crosses a hanging wall of rock between two peaks with the aid of ladders, chains and mild via ferrata. Early in the season under snow or in rain this would be difficult but with our rock climbing background we didn't find it too hard and even worked in a few off route variations onto minor summits. 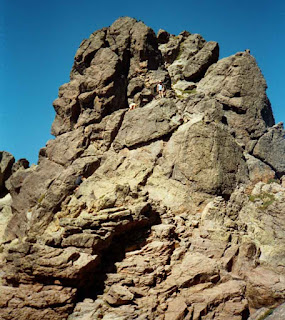 No chains up this one but the packs were left behind to climb it. 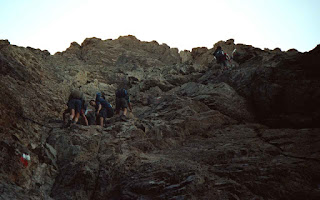 More chains on a long uphill traverse. The main difficulty was the size and weight of the packs, pulling you off balance. 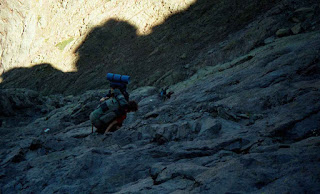 Going up was fairly easy though tiring. Coming down was a different matter as for some strange reason the chains and wires ended, leaving a considerable drop down a steep rock wall which had to be scrambled without any help whatsoever... unless the situation has changed since then. This was an oddity I noticed in the Dolomites as well with back packing trails carefully chained for heavily laden walkers going up and sod all going back down when your are off balance on tiny ledges and really need them. A puzzle. If you slipped or fell with a heavy pack on here, there would be little chance of stopping yourself and you might well take others with you on the way down. 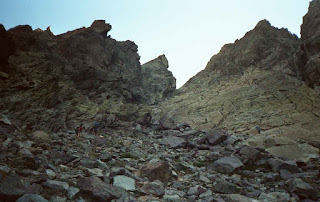 More descending. At least it was in the shade, being close to vertical in places. 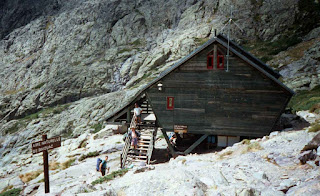 One of the huts we stayed at. Camping was allowed here, which we did, but it also had a great under level for campers use that you could actually bivi under out of bad weather with a sink and basic camping facilities. A great idea. 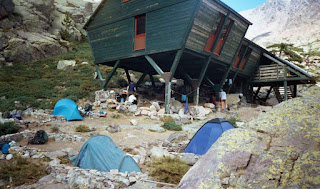 Same hut showing the under level and tents. Some of the mountain peaks in this vicinity around the hut were ridiculously steep. Like natural skyscrapers soaring above us. 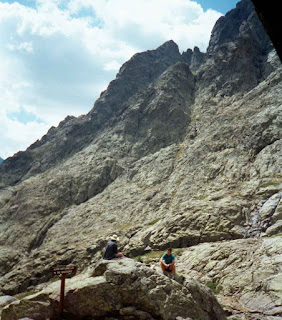 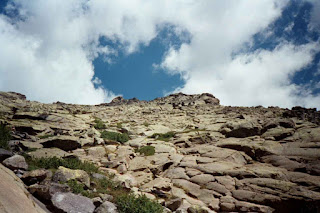 A crazy Corsican peak. This one was so steep and vertical it made you dizzy looking upwards. Hundreds of feet into the air and hardly a break in it. Normally, the natural world doesn't produce
a vertical surface as smooth and steep as this one. Even climbing it with ropes would be intimidating. This photo doesn't do it justice at all as you get no idea of the height involved. Mind blowing. 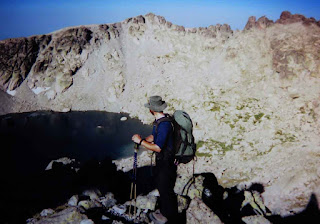 Later on in the trip Gavin and I climbed the second highest mountain in Corsica on Day Nine, which was Monte Rotondu, 2,622metres, 8,602 feet. This was only a four hour climb from our tents and had the benefit of several large rock bowls, one of which held Lavu Bellebone, a hidden mountain lake with a beach of pure white sand that is completely frozen over in winter. 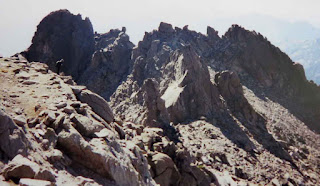 Very interesting mountain with amazing rock scenery and good but easy scrambling, that can be avoided, if required, to reach the top. A faint path leads to the summit without any real difficulties which has an emergency hut built into the rock. 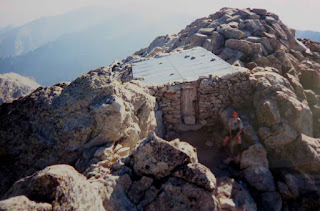 A fantastic mountain and a fitting highlight of the trip. What a holiday and great company throughout. Thanks guys. When we ended our trip by train back to the coast we passed through several sizable forest fires as the lower slopes were tinder dry, a not infrequent occurrence on Corsica seemingly, with many of the beautiful tall pine trees that cover the mountains blazing like Roman candles. A real shame for such ancient trees that had survived so many winters.

I include this link not only for all the info required but also for the amazing video of the GR 20 North,(the route we did) which is filmed and edited to a professional standard. It may be 55 minutes long but it gives you a real idea of the scenery and quality of the GR20 and it's better than most of the outdoor/ adventure programmes currently on television. The guy must work in that industry I'd imagine as its one of the most enjoyable hill walking/scrambling/travel documentaries you will see.Great music and easy going backpackers means it does not drag at any point.Well worth a look even if you have no intention of going to Corsica just for the beautiful scenery and presentation alone. It clicks full screen in HD. Sit back and enjoy.
http://corsica.forhikers.com/gr20

Wow! That was a genuine adventure! Thanks for sharing your story.

Cheers Linda.
Europe has some great backpacking trips through a wide variety of landscapes.

I'm surprised that mountain hut with the space underneath doesn't blow away when the gales and hurricanes get underneath it! Doesn't look very comfy for camping or bivvying either - looks like all rock! I guess I'm just soft...
Carol.

Hi Carol,
that hut seemed fairly sheltered surrounded by high mountains. It did seem like an OK bivi under there, in summer at least, as it was nice and cool and we spent part of the evening sitting under there watching the stars as the hut was busy.
Even just watching the first 10 or 15 minutes of the video gives you a good idea of the mountain terrain underfoot and the real beauty of Corsica. I forgot just how rough the "path" was... more like paint marks across a boulder field or small cliff at times and hard work with a large pack in that heat. I certainly couldn't do it now.
At that particular hut the tent spaces were little individual dust bowls marked out by circles of rocks and reminded me of sparrows in summer having a dust bath in the garden. Also, never been so grubby backpacking and a clean T- shirt lasted around 2 hours before it was completely soiled by sweat and dust.

Really enjoyed reading this section of the e-book Bob, so it's good to see the pictures full-screen. Looks a properly tough region to operate in, particularly given the heat.

Cheers Ian,
Yes, the heat was intense but it's a fantastic island and a memorable one.