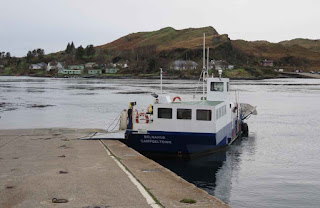 ALL PHOTOS CLICK FULL SCREEN
November tends to be a dull soggy month of rain, mist, poor visibility, flooding, occasional snow showers... and on grey overcast days it can be too dark to see indoors by 2:30 pm in the afternoon. I don't like November much. Usually, a month to be suffered rather than enjoyed.
Alex had been busy for weeks planing an old pal's bothy weekend trip but with families, work commitments, social obligations and a whole host of other things getting in the way, trying to organize a date everyone could agree on was proving difficult.
Eventually, we settled on last weekend and luckily the weather gods were on our side. It turned out to be a spectacular event and one of the best trips of this year, people and photography wise.
As the Saturday morning was grey, overcast and cloudy when we arrived in the Oban area, after an early rise and sunny drive up from Glasgow, Alex suggested exploring the Island of Luing (pronounced Ling) just south of Oban and reached via the "Bridge over the Atlantic" onto Seil Island. At the far end of Seil lies the narrow Cuan Sound, seen here, and the Luing Ferry. Room for passengers and about 5 to 6 cars for the short trip over. Around £13:50 to cross with car and 3 passengers in 2015. So we did. 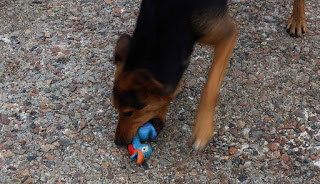 This cute friendly dog with its squeaky toy is a familiar local sight. It loves that wee blue bird and enjoys chasing after it when you throw it. It's also intelligent and drops it at your feet then backs off calmly, waiting to retrieve it. I don't enjoy throwing objects for over eager excitable dogs that dive in and almost bite your fingers off as soon as you bend down to pick up any dropped object. This dog is not like that. Smart cookie. A perfect mutt for me. Mind you, maybe it's completely addicted to this simple pleasure and on busy days it's run ragged with well meaning folk throwing its toy around. 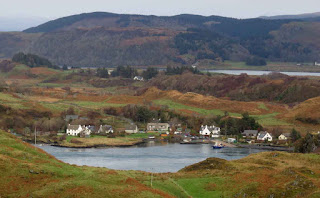 The Cuan Sound and Seil-Luing Ferry from our hill. Obviously, the reason Alex suggested this island was to bag the high point on it at 306 feet above the village of Cullipool. Not a lofty summit but one with great  panoramic views over dozens of west coast islands. It was a grey cold day but we could still see a fair distance from the summit. 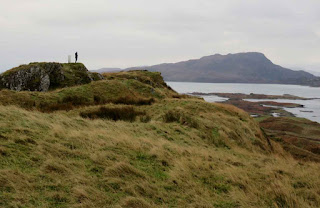 One of Alex at the top with a view over to the high, rugged and remote island of Scarba. With no regular ferry service and only a private lodge and very limited facilities on this island, ie none, few people ever get to visit Scarba unless they have a kayak or boat. Still a truly remote location in this modern age. 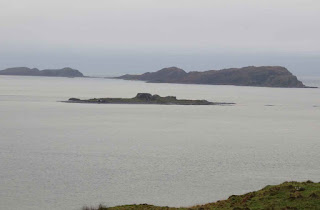 One of Belnahau and The Garvellachs, famous for their hard to reach ancient bee hive cells built for monastic hermits escaping the harsh realities of mainland life for another kind of spiritual spartan existence on the fringes of society. Yet occupied at a time when travel by boat was the fastest method to get around.
https://en.wikipedia.org/wiki/Eileach_an_Naoimh
Belnahau is one of the four Slate Islands consisting of Seil, Easdale and Luing, heart of the Scottish slate industry for around 200 years, exporting roof slates to all corners of the globe during the 18th and 19th centuries and a source of employment on the islands up until the 1950s-1960s. A massive storm swamped the quarries on Belnahua which was then abandoned as demand for slate declined, and another small island is no longer visible as it was dug into so much the remaining perimeter edges collapsed and it drowned forever under the waves. 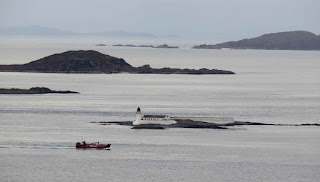 One of a ship (Ferguson) passing Fladda Lighthouse. Many years ago I explored this area by kayak during dead calm conditions but it can be a dangerous area with several strong tidal rips between the islands which will easily pull you under if inexperienced and you go out too far into the main channels. Ferry and large boat wakes can also travel long distances and hit you without much warning, as I found out crossing to Inch Island. As I was usually on my own during these trips (solo kayaking is never a good idea for anyone and I don't recommend it) I mainly explored the nearest islands close to the mainland or hopped short stretches between island groups. Looking back at my own level of ability then I'm lucky to still be here but as always I was caught up in the passion of a new sport and health and safety was not as prominent an issue as it is today. Exploration and excitement first- safety and staying alive last. Don't  recommend that either. I did have a life jacket but no phone or boat radio to call for help in those far off days of innocence and heartbreak. Lack of funds and stupidity were my constant companions. 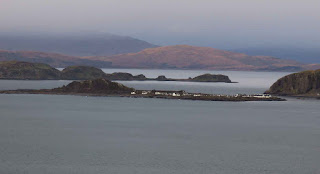 Easdale and Inch island. One with a village community- one uninhabited. 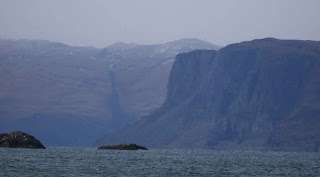 The steep cliffs and mountains on Mull, one of the largest west coast Scottish islands along with Skye, Harris and Lewis, Islay and Arran. Melting patches of snow on the higher slopes here. 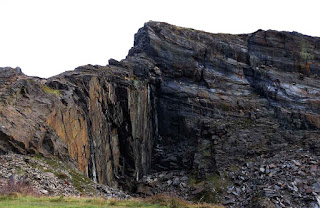 We also managed a walk along the coastal path north of Cullipool to see the abandoned slate quarries. In places this path has been eroded away by the sea and some mild scrambling is required now. Slate in this area was once sediment on the sea floor 500 million years ago then changed by enormous continental plate pressures into sandstone or mudstone then raised above the waves to form compacted beds easily split by hammer and chisel into thin layers. It's an interesting coastline for geology with many different rock types on show. 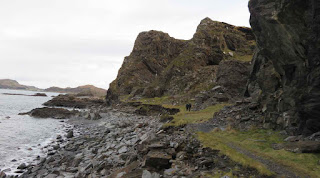 Wandering under the quarry cliffs. Myself, Alex and John on this trip. 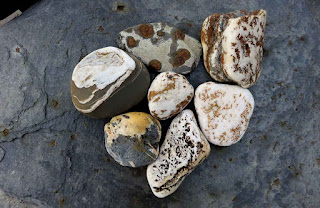 A collection of beach pebbles on slate bedding. 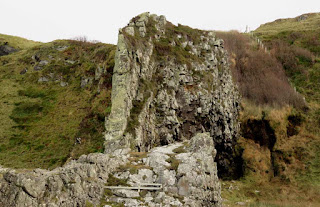 A sea eroded dyke still remaining near the beach. 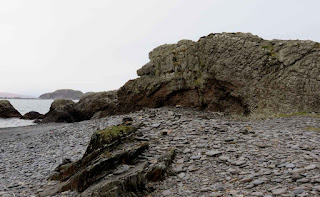 The dyke from a different angle. 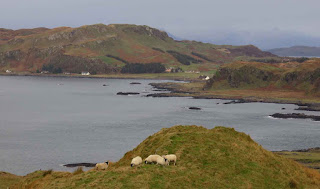 Looking across at Seil Island from Luing. Noticed a few owls here out hunting in daylight due to dull skies and heavy rain cutting short their night time opportunities. The same abilities that make silent flight possible means their feathers are not waterproof and the owls chill quickly once soaked. They can only fly properly in dry conditions and will hunt in daylight if pushed to do so and it's not sunny.
No decent photos though as too far away or too fast to capture clearly though I did get a few blurred images. 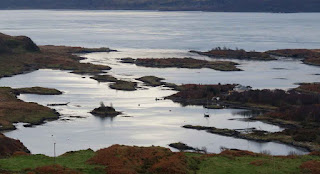 Looking down at the islands around Poll Gorm and Glas Eilean. 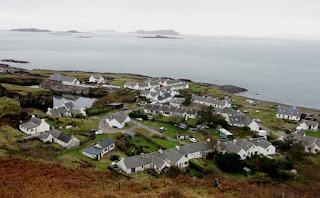 Descending into Cullipool, one of the main villages on Luing with a good cafe/ restaurant/ visitors centre complex where we ended up for lunch. It's the building reflected in the flooded slate quarry seen here. 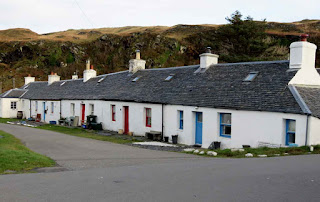 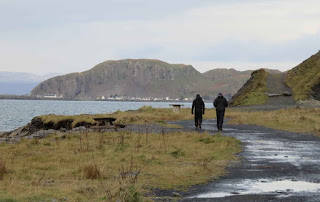 Walking in the direction of Easdale along the coast. A cold raw day. 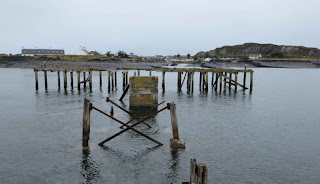 Old Jetty at Easdale island. A small passenger ferry takes you out to visit this community. Popular with visitors in the summer months. Princess Diana's mother, Frances Shand Kydd made her home on Seil island for several decades from the late 1960s until the early 2000s when she died, aged 68. 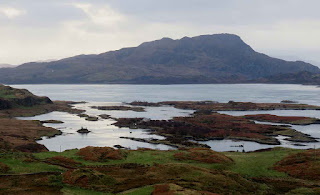 A last view of Scarba. It was now time to visit Oban then walk into our bothy to meet the rest of our companions.

Great photos Bob, those islands are really are worth visiting. Must get you back in a kayak! :o

Yeah lovely photos. I've been to some of them - Easdale for a start. Don't seem to have been to Luing (where the lovely crofter cows come from) looking at your photos though.
Carol.

Cheers Douglas,
I'll never be as adventurous as you though. There must be few interesting places left around the Scottish coastline that you haven't explored. I've never been to Bow Fiddle Rock and we've heard it's got good easy climbing on it so that may be a future exciting project for us, all going well.

Hi Carol,
Hope your back is improving. Easdale is lovely in spring with the view from Dun Mor above the village. I forgot to mention Luing is also famous for its grazing cattle.

Hi Linda,
It can be a popular area in summer with tourists and narrow busy roads so nice to get it empty in winter.

Great stuff Bob - a favourite area and I love the beach pebbles image. Bow Fiddle Rock is my local paddle; if you make it up here then let me know, spare boats, kit and paddles available! I'm away Dec-Apr but outside that it would be great to get you out there in a kayak!

Cheers Ian,
If we do go up there, and I'm invited on the trip, my intention was to photograph the climb from the water as I doubt I can get up VS these days. It would be a spring or summer event so we could meet up. Probably be my cheap inflatable rubber kayak though as the last time I tried a proper sea kayak I found it too unstable for a novice not used to one.

Okay, now you will laugh at me, I know but I really love that photo of the pebbles against the slate. If that was on a pack of notecards, I would buy them.
Also, when I saw the word "Mull", it reminded me of "Mull of Kintyre" by Paul McCartney. I love that song, but it is the one song that was not a hit in the USA.

Hi Kay,
I liked them myself and they didn't take long to collect. Like Mull of Kintyre, the actual place, not so keen on the song which was on top of the pops for many weeks here...sadly. For me it's in the same musical bracket as St Winifred's School Choir and Grandma. Although a popular song Mr Mc C created much better, more intelligent, material earlier. Added a new link to the Bee Hive Cells on the Garvellachs as they may be the oldest ecclesiastical buildings in Scotland and possibly Britain.

Not a place that I've been yet. However, I'm staying near Oban for a week at Christmas so I'll add it to the list of possible walks. I agree with you about November, hibernation month for me as well. Too much rain.

Hello Neil,
Another good walk you may know about is the path around Kerrera which is around 4 to 5 hours on a dry day. Oban is also good for a wander at night with the Christmas lights and will be the next post, all going well. Easdale is worth a visit with a good view point hill right above the village and the Highland Arts centre there is very different thanks to the paintings of C John Taylor. A unique artist who divides opinion :o)
Druim Mor,445 feet, right above Oban, is also a smashing hill for views and very close to the town. One of my favourite walks is a circuit of the small hills around and in the town itself from Dunollie, 417 feet, over Mc Caig's Tower and the old Hydro to Druim Mor. Superb and different views from every summit.