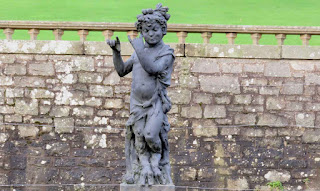 Another smorgasbord of Scottish hills, interesting villages,and history... this time from central Fife. Above is a little statue which I assume to be "Pan" the animalistic god of the woods who lived in Arcadia. Note cloven hoof instead of feet and playing pipes position. Ever wondered why Peter Pan had that surname? ( a free spirit who never grew up- delighted in games-lived outdoors- did what he pleased.)
This was taken in the gardens of Hill of Tarvit, a grand Edwardian mansion deep in central Fife once owned by the wealthy Sharps family from Dundee from the early to mid 1900s and now looked after by the National Trust for Scotland and open to the public. 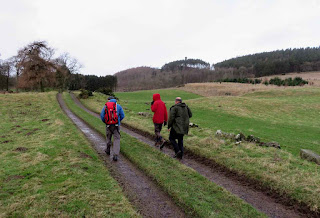 I digress however, as we were drawn to Fife mainly for its hills, not its stately homes. Many people think of Fife as rather flat but the spine of the lesser Ochills runs down through it creating a beautifully wild and rolling landscape as seen in the photo below. 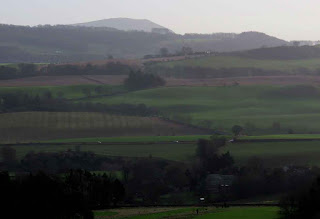 Although most are under 300 metres, 1000 feet high they are numerous and we still have loads to discover here. Paths are faint or non existent and people few in number on the actual hills. Little villages dot the roller-coaster terrain, many hardly altered in centuries and I love it here in "The Kingdom." Is this a modern day Scottish "Arcadia"? It does resemble the classical paintings hanging in galleries. A secret northern Cotswold's perhaps but one without the milling crowds. 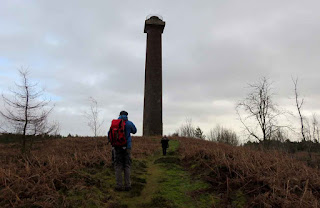 Mount Hill near Cupar was our first target at 221 metres according to my well used OS Landranger St Andrews Sheet 59 map. A guide to many wonders over the years. The second photo is our group of Alex, Graeme, Bob R and myself (the shy photographer) heading off to bag Mount Hill. On its summit sits the Hopetoun Monument, a companion to the tower mentioned a few posts ago over in Lothian district. This one is locked and needs permission and a key to get inside. It also requires a torch as it's much darker than the other tower with very narrow slits for light and air. 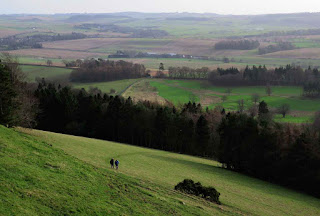 Our second hill of the morning was Hill of Tarvit at 211 metres. This is a lovely grassy crown which enjoys better panoramic views than the first one. A weak sun just starting to burn off the early mists. 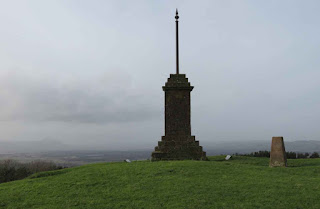 It also has a distinctive monument on top and a trig for Alex. Looking at the night before forecast Fife was where the sunshine was in an otherwise rubbish day. It was sunny and dry but only just. Grey clag and drizzle on the higher ranges but a weak winter sun and misty views below 1000 feet here. Which is why we picked Fife of course. 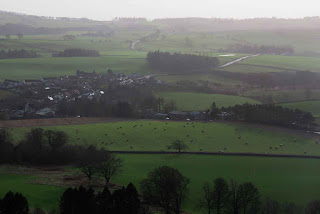 Another view of rural Fife. 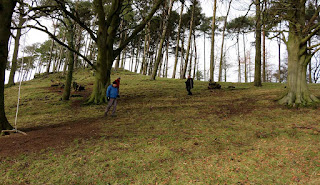 On the way down through a lovely deciduous beech woodland it did strike me that even old men like us still have the spirit of "Pan" in them as we couldn't resist a go on the swing we found here. 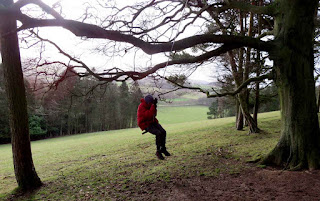 It was still in good shape when we left it. The oldest swingers in town. 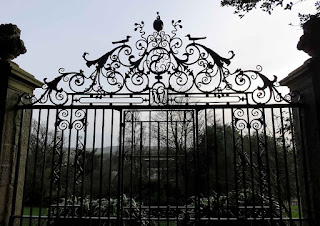 Next up came an exploration of the Hill of Tarvit gardens reached through this elaborate back gate. Reminded me of "The Secret Garden" entering from this angle. We had parked in the mansion house car park for the hill above and were now looking forward to a slice of history.
https://en.wikipedia.org/wiki/Hill_of_Tarvit
PS. I did look around for something other than wiki here but most of the other links to this mansion were promoting weddings, corporate events, etc instead of a concise history of the house and grounds.
Luckily, being winter, the house was closed to the public and the car park was free to use. The gardens did look as if they would be transformed in summer with colourful flower displays but we had to make do with a winter visit. 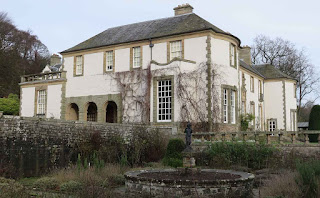 Hill of Tarvit mansion and rose garden in January. 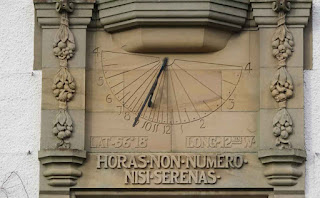 A sundial on the front wall of the house. The inscription is a popular one on more elaborate sundials. Rough translation... "I do not count the hours unless they are 'sunny.'" ( Also serene or tranquil in other interpretations depending on use) Could be the life motto I live by and a good one for my headstone if I wasn't a fiery furnace candidate. 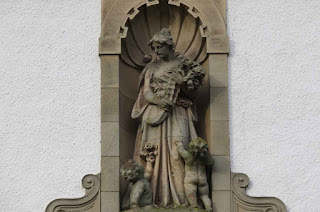 A depiction of Ceres presumably as she has a cornucopia in her arms. Hill of Tarvit mansion. 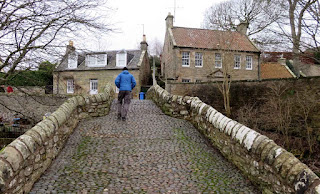 Next we visited Ceres itself, an ancient Fife village and like many in this district, full of oddities and quirky surprises. Ceres is of course the Roman goddess of Agriculture and crops and a devoted mother. Known as Demeter in Greek mythology, the Goddess of the Harvest and mother of sweet Persephone, my companion each spring. This harvest in Fife appears to have been a poor one?, grain wise, as we passed field after field of haystacks sitting forlornly. Many had been burst and scattered open to reveal rotten, moldy insides with all the rain and storms. This is normally the dry east coast and fertile bread basket of Scotland so hay bales should have been sun dried, lifted and stored away months ago for livestock fodder. It was a cracking golden autumn in Glasgow so you would think the bales would have been ready for collecting. Couldn't find anything on the internet so it's a puzzle.Unless October here was so bad September sunshine could not help the stacks dry out fast enough?
http://www.ceresinn.co.uk/villagetrail.pdf
Many Fife villages and towns are loaded with history and Ceres is no different. The link above explains the curious hob- goblin figure adorning a gable end building in the main street overlooking the inhabitants. 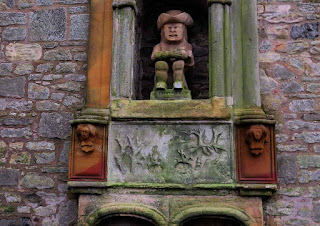 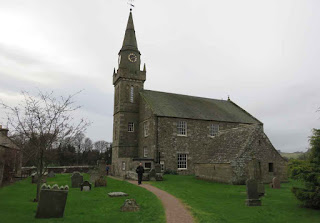 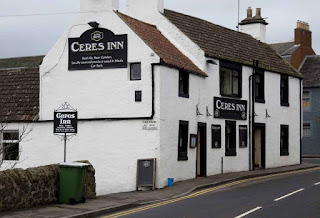 Ceres Inn. Around since 1721 according to the sign. Ceres may have had a different spelling and meaning but over time this has been lost or altered and the classical link may have gained approval judging by the mansion house statues and numerous old biblical place names in the surrounding district. 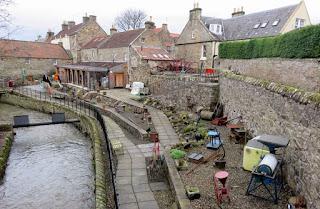 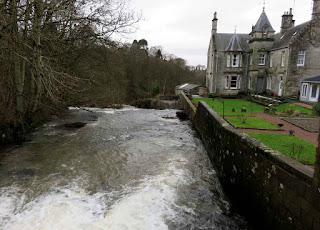 Next we visited Dura Den, A deep wooded gorge with several small burns and waterfalls running into the Ceres Burn, a tributary of the nearby River Eden. (classical inspiration behind landscape features are never far in Fife). A curious collection of houses sit in this picturesque gorge but we wondered why this linear human development enclosed by small cliffs seemed to have houses missing and new walls in places where you would not expect them to be. 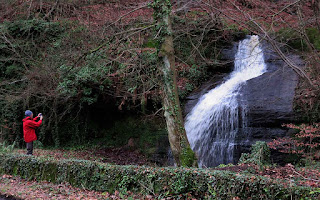 When we asked a local if you could still do the short walk along the riverside here past the waterfalls ( mentioned in a 20 year old tourist book Bob R had) the women seemed unsure and muttered "so much has changed, it might be gone now?"
We just assumed she was new to the area after a long absence and had a wander along the minor road that carves through the gorge instead. 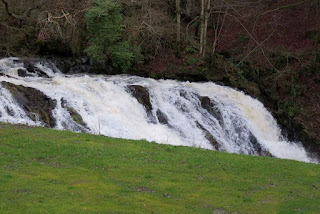 As you can see it is a sizable body of water flowing down this hidden gorge with a few nice waterfalls. It was only when we got back to Glasgow, Alex found this on the internet.
http://www.dailymail.co.uk/news/article-2216100/UK-weather-forecast-House-brink-washed-away-torrent-water-rips-away-ground-underneath-it.html
Dramatic photos but I didn't remember reading about this or seeing it on the Scottish news as there is so much annual flooding in the UK every year now only the large scale events get full coverage and it may have slipped past my radar if I was away somewhere. Also a good link for a collection of fantastic autumn photographs showing this season UK wide. Britain is a very special place sitting between complex and competing weather systems which gives us such a unique climate. If we still want the seasons to mean anything here or keep animals alive on our planet in the future outside of zoo and wildlife parks......
No money available? Well, we always manage to find that from somewhere to wage our various wars. Mind you, if we all lived in peace how would the international arms dealers and the "good guys" in the west ever make a profit selling guns to IS and all the other "bad guys" scattered around the world. Income is income and the moral high ground is never where you think it is
http://www.theguardian.com/world/2016/feb/13/150000-penguins-killed-after-giant-iceberg-renders-colony-landlocked
150,000 penguins dead in one colony alone. When is enough enough? Maybe this wee guy knows something after all. Where is he/she going? To find a different world free of humans perhaps?

Hello Linda,
Yes, Fife tends to have an abundance of historic villages and towns so St Andrews, the home of golf, is not the only attraction.

What a scenic place to spend the morning in.

Hi Lux G,
It's not called "The Kingdom of Fife" for nothing... which could be another biblical reference come to think of it. The old timers must have thought they were already in the Garden of Eden living in Fife.

Scotland just seems like my kind of place...nature, history and fresh air!
Can't watch the video just now, will try to come back to it.
Peter Pan...you know about the connection to the Great Ormond Street Hospital in London, don't you? My husband really owes his life to that hospital so I have a fondness for Peter Pan.

Love the sundial inscription (now you've translated it) - that could apply to me too! Or maybe I'm more counting the hours UNTIL the sun shines again!

Richard's wanting to go to Fife next...

Hi Kay,
It's a great place in good weather... grim and cold in the rain. You probably know that Peter Pan was inspired by J.M. Barrie's older brother who died aged 13 ( and his mother's favourite)with 6 year old J.M always attempting to fill that position... unsuccessfully. Gave him the idea of the boy who couldn't grow up and lived in Neverland but turned him into a highly complex character as an adult.

Hi Carol,
You would both like the Lomond Hills and Bishop Hill climbed from Falkland Village. It's a fine circular outing of around 6 hours with great views on a good day. Falkland is another beautiful historic village and a good weekend base. Norman's Law is also worth a visit.

Falkland and the Lomond Hills were just about my parents' favourite place in Scotland. I will have to visit one day.