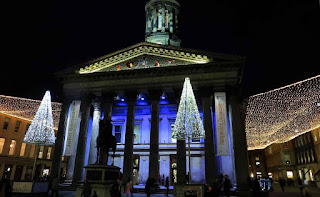 ALL PHOTOS CLICK FULL SCREEN
As I've been travelling into Glasgow City Centre for the past two weeks I've had plenty of opportunity to photograph Glasgow's Christmas lights so here's a gallery. It's dark by 4:00pm now in Glasgow and only gets light again 16 hours later so the lights add some much needed cheer to the winter chill. Royal Exchange Square above, The Goma (Gallery of Modern Art), and the Golden Mesh, which is a great idea. Usual traffic cone placed firmly on the head of the statue on horseback (The Duke of Wellington) for reasons few can work out. Now well known for it being there despite council efforts to remove it. (Don't ask... it's a Glasgow thing that only started around 30 to 40 years ago) 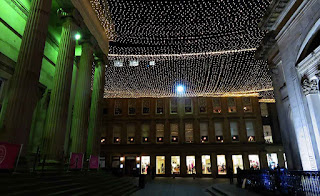 Another view of the Golden Mesh. This Goma building (in green and blue, photo above) used to be the grand town mansion of a tobacco lord- the billionaires of their day in the 18th century and many of Glasgow's city streets are named after them or the American states and plantations that made them so rich. You can tell by the opulence of this massive building, constructed for one family and servants, that trade was good. 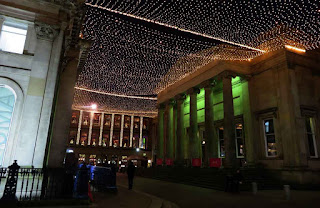 The Golden Mesh from the other side. 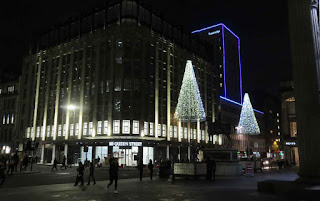 Looking out at the front entrance into Queen Street. 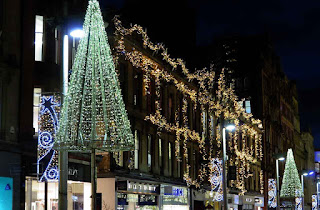 Buchanan Street next and the heart of the 'Style Mile.' Reputedly Glasgow still has the biggest city centre shopping district outside of London in the UK- a legacy of its 'Second City of the British Empire' industrial past. Nowadays, like many other town centres competing against the internet, the shops are either high end expensive stores or cheap discount outlets and pound shops with not much in between these two types of business, neatly summing up in concrete form the ever increasing social divide in the UK. This is Princes Square at the bottom of Buchanan Street. Visited it once when it opened just to see the place out of curiosity but didn't buy anything :o) It's not really mean spirits on my part- as I get all the thrills and kicks I need from the great outdoors...and would rather spend my money on that these days. 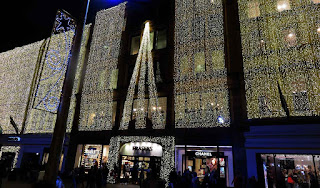 Frasers next door, right across the pavement facing Princes Square. I have been in here a few times when I was young and bought a gold painted and decorated jar of honey once ( very nice it was. A Christmas gift for 'Sarah') but haven't been in here for at least 20 years. Some parts of Glasgow are little known to me now and this is one as I'm not a shopping person for any overpriced luxury items these days. At my age I'm happily out the habit of visiting expensive places for the fun or novelty of it I suppose. ... but I do like the lights. 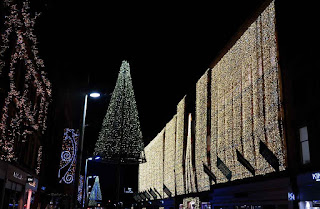 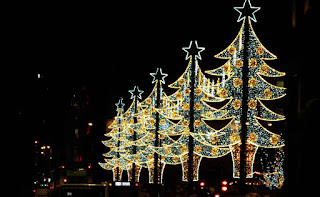 George Square traditionally has the main display of Christmas lights and festivities. They just changed them this year from illuminated hanging bells moving back and forth, although silent thankfully, to this years model- Christmas trees and hanging snow flakes. A nice change as the old ones were up for many year's in a row. Although Edinburgh is a smaller city than Glasgow it seems to have a more affluent population and has more showmanship, resources and diversity with its Christmas lights- going by my own observations over the last decade. Many years ago many of Glasgow's richest citizens moved out to suburbs just beyond the city boundary line in areas like Milngavie, Bearsden, Clarkston and Newton Mearns so most of the city's income collected over the years has lost some of that top percentage. 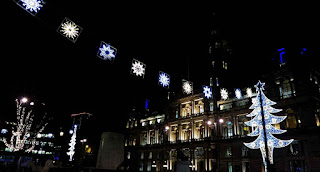 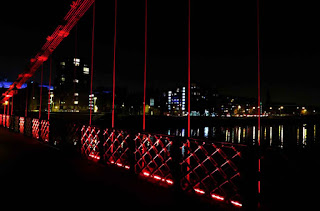 Pedestrian Bridge over the River Clyde. One advantage Glasgow has over its east coast rival 30 miles away on the Firth of Forth (Edinburgh) is the mighty River Clyde flowing through the heart of the beating city. This is great for reflections day or night and a walk along the banks of the Clyde in early evening with the lights coming on and the darkness looming is a real highlight. 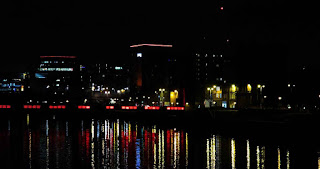 Another of the city centre and Jurys Inn Hotel beside Central Station.(main railway terminal) 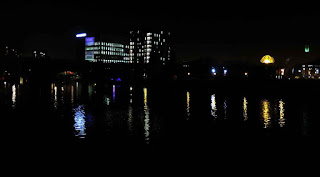 The new City of Glasgow College and Glasgow Central Mosque reflecting in the River. Merry Christmas and a Happy New Year to All. Best Wishes for 2017.


And a brilliant and appropriate video to end with. One of the main highlights of the festive television period a few years ago for me was an unexpected look at Britain's ancient winter traditions and celebrations, many with pre- christian roots." A Very English Winter by The Unthanks." Weird and wonderful stuff and the visual highlight was the completely mad mayhem and near anarchy of the famous Lewes bonfire celebrations in Sussex. Health and safety experts look away now :o) This is TV gold from Northumbrian folk singing sisters Rachel and Becky Unthank. If it's on again over Christmas it's a programme well worth seeing in full. Here's a short taster. Had to link direct into You Tube for this but it is worth watching.
https://youtu.be/KoPknsPvCL0

Shopping is not for me either but Glasgow is looking very well dressed for this 2016 festive season - sending Christmas greetings to you both.

Absolutely gorgeous! Wishing you a very Merry Christmas and a Happy New Year. Warm greetings from a cold but snowy and nice, Montreal, Canada. :)

Love all the colorful lights! Your city sure knows how to do Christmas lighting right. Love your last photos of the light reflecting on the river too.

Lovely lights in Glasgow. Funny they have the traffic cone on the statue's head, I know you said, don't ask why, so I won't, but it is funny!

Cheers Anabel,
Just been looking at 1960s old Christmas lights photos of Glasgow. They definitely had more lights up then in the smaller shopping streets but they are mainly pound shops, coffee or food outlets now instead of retail. Renfield Street and Sauchiehall Street had rows of overhead lights running from top to bottom then. Mostly concentrated around George Square now which wasn't such a focal point at that time. Interesting to see how it's changed over the years.

Hi Rosemary,
It's not bad but I think Edinburgh has edged ahead in the Christmas illuminations department over the past ten years... and stolen our Hogmanay celebrations into the bargain that Glasgow used to be famous for...:o)

Cheers Linda,
You certainly have more White Christmas winters than we do of late. Turned very mild here again. 10 degrees above freezing yesterday.

Hi Linda W,
Cheers thanks... more to follow in daylight at some point.

Cheers Ian,
It's not a great camera in low light conditions but I like it otherwise.

Hi Kay,
Glasgow has just been voted the world's friendliest city in a Rough Guides poll with Liverpool coming in 3rd. Two former working class sea ports with shipyards and large factories so it might be that as they are less reserved and more open to talking although that is changing now world wide with smartphones and tablets capturing people's attention on public transport instead of one to one conversations.

Trying again to comment but now I'm having to draw things with the mouse instead of even just clicking on things!! :-(

I hate shopping - strange for a female apparently - perhaps it's just my Yorkshire parsimonious streak!

I love the wall-net-light-covering people are having this year and any of the lights which are actually colourful. All ours are just horrible, cold, white or blue this last few years - horrible!

I've long said that Glasgow's the best place for city centre (or mall) Christmas shopping in the UK - between the Buchanan and Enoche Centres, and everything in-between and roundabout - including the high-end Prince's Square - there's everything you think you need, and more. Lovely night shots. Merry Christmas, Bob, and the happiest of New years to you. Thanks for all your great posts and comments.