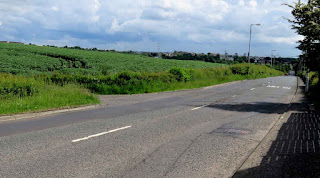 ALL PHOTOS CLICK FULL SCREEN
A view of Balmore Road and fields of growing crops just having left the Forth and Clyde canal, passed through Cadder and then Lambhill Cemetery on the outskirts of Glasgow. I was surprised to see growing crops and still busy farms in this area as Possilpark and this part of North Glasgow has traditionally been home to several rough estates/schemes. Lynn Ramsey's critically acclaimed but fairly grim and depressing  'Ratcatcher' was filmed around this area on the nearby canals and housing estates but to me it was not uplifting enough compared to my own happier and carefree childhood on the urban outskirts around Pollok. More Moonrise Kingdom growing up in that environment than Trainspotting although I was not unaware of its darker side at times. Fortunately, I picked the light... or the light picked me. 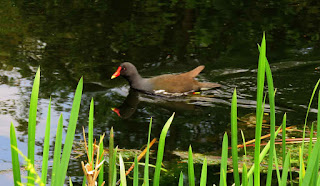 Yet in my own area of Nitshill all the working productive farms that used to make the surroundings so delightful to explore as children have all gone and been replaced instead by waist high jungles that used to be short grassy fields, dotted here and there with hawthorn hedges, bright yellow gorse bushes full of yellowhammers and linnets singing their hearts out and herds of black and white dairy cattle that maintained a park-like short grass setting. Even a few real fruit trees, plus crab apples, gooseberry, raspberry, plum and brambles in season were found by chance or word of mouth... and an occasional hay harvest to sneak into in the autumn and more conker trees than we could fling sticks at. In short a cornucopia of riches on our doorstep. Maybe the difference between the two areas is that simple fact- being walker and child friendly we did explore the farms and fields on a regular basis and very little scenery was out of bounds to us whereas you can't really go on a stroll through these fields of crops without being chased, which is probably why they have lasted in this area so long. Not the same incentive to explore here either and nowadays of course most children are not allowed to explore the surrounding countryside unsupervised. Very wise given that busy road between Lambhill and Milngavie. 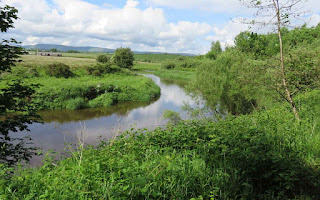 Anyway, as in the last post,  Part One ended on the River Kelvin Walkway, seen here above. An enjoyable if secluded walk or cycle that brought me out as intended  to a two way split just above Acre Road. I took the left hard track, leading directly away from the River Kelvin and soon ended up in Summerston. 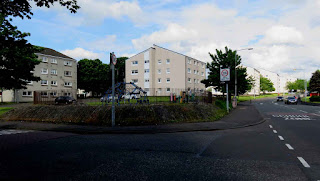 I've not visited this area much either so I was keen to have a cycle around the main loop road to see how it had fared since the last time I explored it around 10 years ago. Both Summerston and Darnley were built in the 1970s, The last of the large housing projects in the city completed by Glasgow City Council.  I found it interesting to compare these two estates, built at roughly the same time. Summerston still exists and looks a nice place to live even now in 2017. It reminds me of East Kilbride in some ways with a similar self contained new town look. By contrast most of the original Darnley estate has been flattened decades ago as it started to deteriorate from the moment it was constructed- a flat roofed deck access estate on multiple levels that soon acquired a number of antisocial problems like severe dampness, a lack of community spirit, no clear tenant boundaries around each home to enforce, frequent gang fights in the warren of corridors, connecting walkways and communal stairwells, numerous empty flats and squatting. Was it the people that destroyed Darnley or the flawed building design that did it in? I think part of the answer lies in Summerston which has a large population but is still thriving . ( the new low level Darnley by the way is a modern attractive estate with gardens and obvious boundary lines around each house...as in... i.e. this is my property and you are clearly trespassing on it....probably  the way it should have been constructed from the start.) 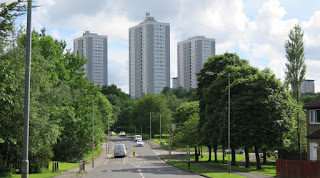 Still in Summerston. Wide pleasant roads, a nice environment and no sign of deck access development, graffiti or vandalism. Very few of these deck access type estates survived for more than 20 to 30 years after construction- I wonder why...
https://en.wikipedia.org/wiki/Park_Hill,_Sheffield
the most infamous one probably being the Divis Flats complex in Belfast which proved perfect for IRA snipers... elevated and hard to discover in the network of open dark corridors above the city scape below. A 'Streets in the Sky' concept that was in vogue at that time. The Park Hill Estate in Sheffield is one of the few survivors from that period and doubled for the demolished Divis Flats in the film 71. The included link has a photo gallery to give readers an idea of what deck access estates looked like as Divis, Darnley and Park Hill were similar in design. 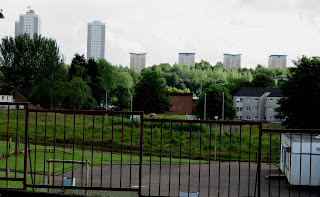 Looking from Summerston across to where I was earlier in Gilshochill. Glasgow has over 40 separate districts with hill in the place name. The Drumlin City of many different summits. 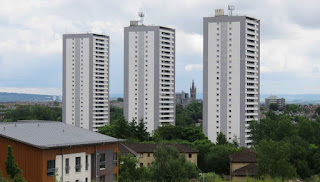 One from Maryhill looking over towards Glasgow University tower between the hi flats. Glasgow used to have more high flats than any other UK city or town and even though many of the tallest blocks have been demolished it still has dozens left. 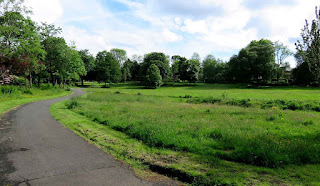 Maryhill Park sits between Summerston and Acre Road so I had a cycle round this green oasis as well. Although a small to medium sized park it has extensive views over a wide area so you can't really see the park boundaries when you are in it... just a wide sweeping landscape to the north. 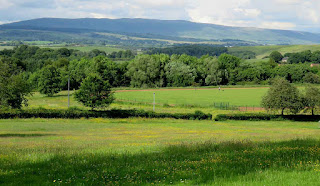 Campsie Fells. Luckily I stayed in sunshine here as at this point a fast but heavy rain shower hit the higher, west side of the Campsie Fells.. always nice to watch from afar as long as you can avoid it. 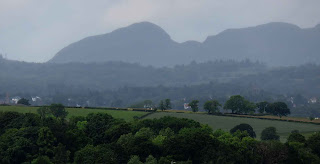 It was pouring down here for a full twenty minutes but jammy me managed to stay dry a few miles further south. 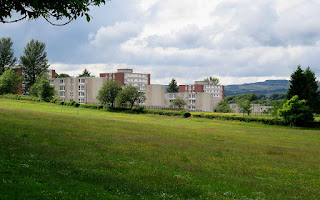 Acre Road came next. Still within the district of Maryhill but isolated and separated from the rest of the city and Maryhill itself by the adjacent park and the River Kelvin. A Glasgow mid level over-spill estate it has always struck me as a far flung city outpost somehow but I remain fascinated by it as it just seems to have materialized in the middle of green fields and countryside like an urban mirage. A Maryhill brigadoon. 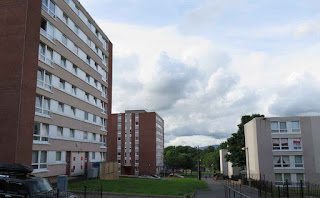 It's really just one dead end road with various mid level blocks leading off it, a bus terminus and a couple of small shops. It also meets up with the West of Scotland Science Park campus of modern parkland setting low plan research and development facilities and that is where I headed next. 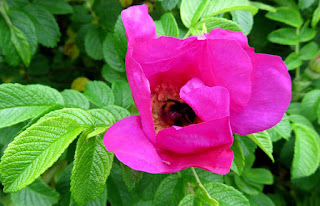 Bumble bee in a wild rose. 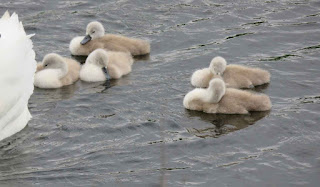 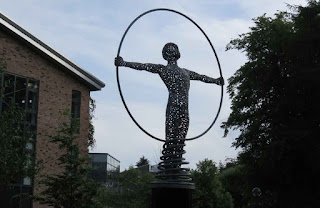 West of Scotland Science park entrance. The reason for cycling through here was to avoid the busy Maryhill Road  and instead take a quieter parallel route along a walkway/ cycle track leading down into Dawsholm Park by crossing the River Kelvin again. 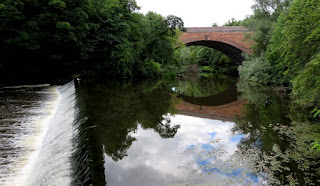 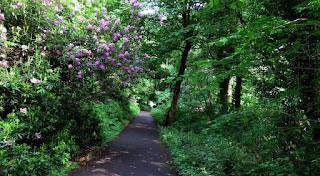 West of Scotlland walkway/ cycle track. This runs beside Maryhill Road and skirts the left hand edge of the cluster of low buildings enclosed in this pleasant woodland setting. At the bottom of this slope a sharp right hand turn leads up into Dawholm Park. 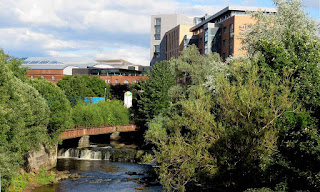 The River Kelvin at Patrick. Smooth and placid for most of its length...at Partick it suddenly develops several small rock shelves and waterfalls as seen here near Yorkhill Hospital. Glasgow's other but less well known major river flowing through the city districts, in less than a mile from here it pours into the River Clyde beside the Riverside Museum and Tall Ship. During the industrial revolution however it's steady and reliable water supply powered various mills and factories along its banks, most of them long vanished or buried under greenery. 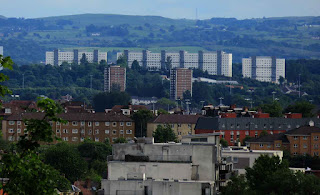 Dawsholm Park itself sits on a hillside with expansive views and few would guess now that this area was originally large bare spoil heaps over 100 years ago- landscaped and remodeled from coal waste into dark woodlands and sunny meadows. This is a view of Anniesland, Moss Heights and Cardonald with the Renfrewshire Hills behind. My childhood green upland playground of rolling braes is here in this photo, the much loved countryside lying between Nitshill and Barrhead. The rim of the bowl that Glasgow sits in very apparent here. 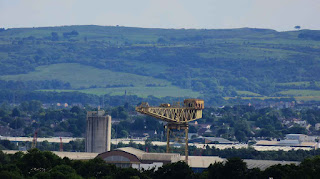 And another local range of hills I knew intimately growing up. Looking south towards The Brownside Braes and Gleniffer Braes between the towns of Barrhead and Paisley. Barclay Curle Crane on the River Clyde here looking across Scotstoun district and South Street. 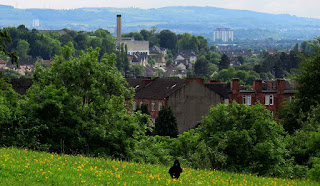 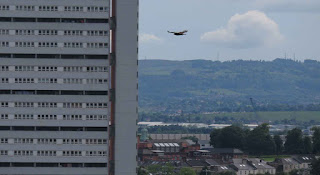 A buzzard beside the 24 floor Anniesland Court tower, The tallest listed building in Scotland and the only skyscraper in the city to have a category A listing so it may be around a while longer than the others. 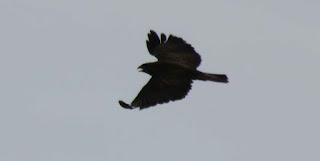 Close up of buzzard over park. 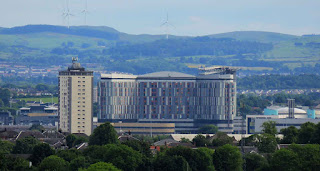 Glasgow's new super hospital, also hi- rise with a helicopter pad on the roof for outlying emergencies, folk on the Firth of Clyde islands etc. that would take hours travelling by road. 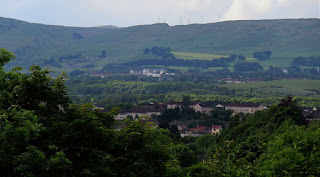 Looking north west towards Faifley, Drumchapel and Clydebank with the Kilpatrick Hills this time as a backdrop. 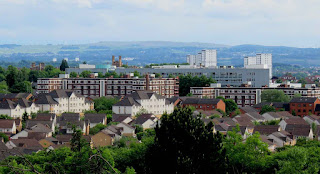 And one of the nearer Kelvin Court flats, Anniesland College as was, and Great Western Road area with Gartnavel Hospital sandstone chimneys middle left. 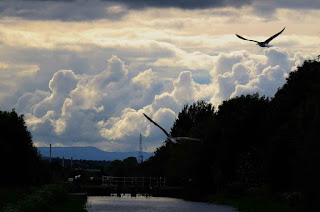 Seagulls on the canal and more rain showers arriving. 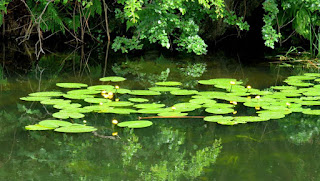 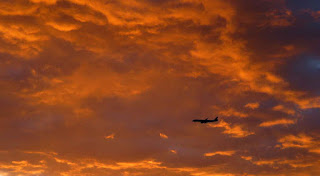 And a sunset to end. An epic trip.. but only 4 hours long.


And a clip from a modern hard hitting film I really liked. Watched this on Film 4 recently. Cracking adrenalin rush movie which features the deck access Divis Flats. No surprise for guessing where the most lawless district of Belfast used to be when they were still standing  :o)

I love the Tom and Jerry video...I love stuff from the early to mid 1900's. Gorgeous photos, so many beautiful things! And this is the first time I have ever seen baby swans. I have seen goslings and ducklings, but your photo of the baby swans is precious.

Cheers Linda,
it was a lot quicker to cycle the actual route than the time it took to put these two posts together :o)

Thanks for taking us along on the rest of your bike ride. Pretty country to cycle through!

You Jammy Dodger you! Now you are making me want one of those biscuits!

That war movie looks really good. If it is on DVD here, I will try to see it.

Tom and Jerry? Uh, you MUST know that I like that cartoon too!

I bet all those tower block residents are worried now - I wouldn't be able to sleep. Hope they've at least got some decent fire exits anyway.

There's that lovely view of the Campsie Hills again - like Carol, I too immediately picked up on all of those tower blocks, and only because of the recent terrible tragedy.

Great photos and stories from Glasgow's heritage. And classic Tom and Jerry to finish.