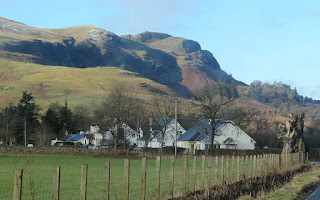 ALL PHOTOS CLICK FULL SCREEN
A welcome day out with company for a change as I received an invite from my friends John and Gail to join their geocaching circle for a walk up Stronend. This is the village of Fintry, above, a nice little place completely surrounded by hills with the Campsie Fells on one side and the Fintry Hills on the other. 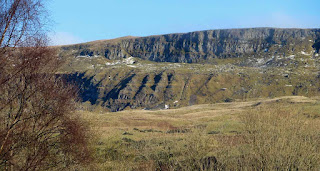 We met up at the car park then proceeded through the picturesque Culcreuch Castle estate grounds, past the pond and avenues of mature tall trees to gain the slopes of this small mountain. 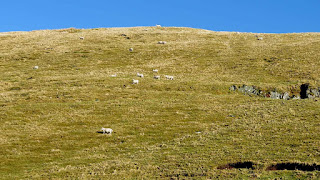 It was a good choice as we were in the sun all day and it felt distinctly spring like. This hill has always felt very 'Yorkshire Dales' country to me as the landscape, contours and crags here match that area perfectly. 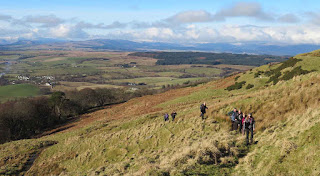 A party of eight I think, including myself. 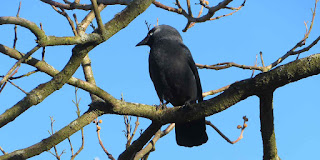 A jackdaw looks on. 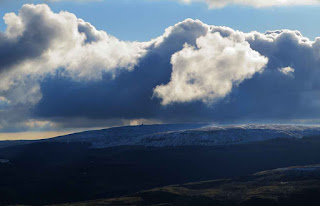 On the other side of the valley dark clouds lingered over the summits so we had a choice of mid winter or spring in the same view. 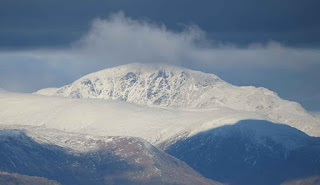 The higher munros were still covered in snow and ice with cheeky winds dropping temperatures well below freezing but the promise of spring at lower sheltered levels seduced me as it always does every year. I like Spring... my eternal muse. 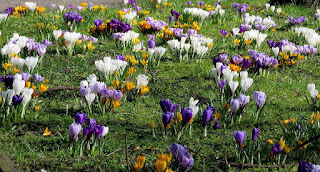 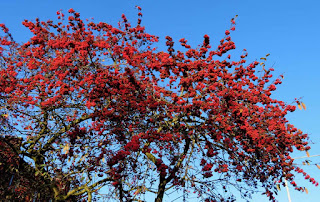 Still abundant berries for the thrushes and blackbirds this year. 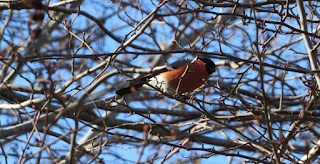 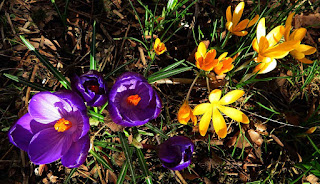 Some folk look forward to the simplicity and purity of snowdrops but for me its these showy, brash, decadent disciples of spring that float my ocean liner every time. The flower equivalent of glam rock or graphic novel artwork. 'I'm here- I'm in your face- cant ignore me!'

They rock my world anyway. 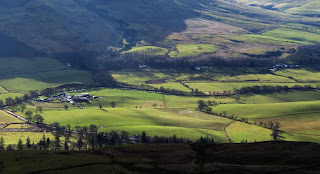 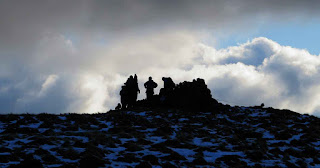 Stronend summit. Out the sunshine here, exposed to the wind and much colder. 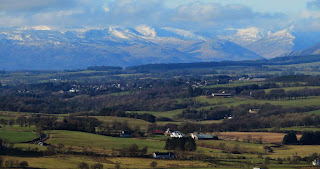 The view across to Loch Lomond and the start of the Scottish Highlands where there are still ten foot snowdrifts on some higher mountain roads further north and another period of arctic weather predicted to hit next week. Lot of snow this year over the mountain ranges but not much here in the Central Belt region. 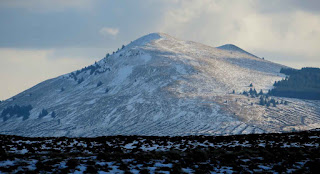 Meikle Bin- the highest peak in the Campsie Fells. 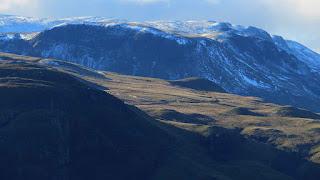 Corrie of Balglass area. A remote and unfrequented region. Probably less folk walk here each year than on any of the Scottish munros. 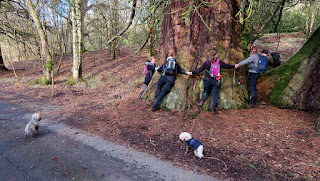 Measuring tree girth. I think this was a Western Red Cedar as Culcreuch has many fine old trees of substantial height and girth. 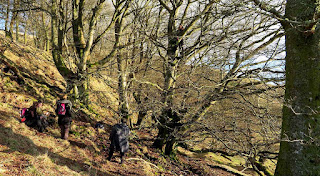 A spot of geocaching going on at height. I can honestly say the last time I witnessed a female climbing a large tree like this was around twelve years old and my childhood friend was really putting me to shame for both bravery and gymnastic ability. We were egg collecting and I was stuck halfway up, repulsed by a committing airy section and unwilling to go any higher with the sudden humiliating knowledge that I was pretty crap at large tree climbing while she stood twenty feet above me, ransacking a crows nest on the swaying upper branches and attempting to gleefully spit on my head to rub in her achievement/superiority further. (which I found a bit over the top and cruel considering my vocal unstinting support urging her upwards as we both wanted those eggs. It was the 1960s and this was the accepted munro bagging sport of that era for children. It was either that or train spotting and this was a far more exciting activity.... apart from being beaten into second place by a girl that is. She might well have gone on to be a top rock climber in a later decade but travelled down a different path entirely in the intervening years. But still completely fearless and very brave.) Brought it all back this did. A memory bubble.

The Voice is a programme I never watch but stumbled across this recently looking for new music.
This is the French version and the five acts featured here are outstanding, each in their own way, especially the final two artists. Unusual instruments and song choices make this worth a watch. If it was this extraordinary every week I'd be a convert.

PS. I seem to have altered my computer somehow by unloading a lot of older day trip photo files onto an external hard drive to free up space as it was getting full. It was running very slow and this has fixed that but its harder to comment on other blogs now in the meantime until I figure out what add on I've unintentionally taken out of service- hence the different ID tags instead of the usual Google Blogger I used to comment/ reply with. Not letting me do that option for some reason.A total scunner but at least I can still post the same way.

Best or most surprising five voices and instruments here in this You Tube link.

We used to travel out to Fintry and the surrounding area so it was lovely to reminded of it again. Love the crocus glade showing such a lovely variety of colours.

I'm not too bothered about snowdrops either and much prefer orange crocuses (or crocii) - I'm desperate for some colour at this time of year! It's bitterly cold here too - that East wind is a horror.

Lovely, as always. Haven’t done this hill (not even the name is familiar) thoigh we’ve been up Meikle Bin which is obviously nearby. Crocuses as glam rock! I like that.

Glad you enjoyed it Rosemary. I've got another post coming up at some point that will also be familiar territory as I went out with a walking group around Milngavie District a couple of months ago.

Hi Carol,
The poet in me hates using Crocii as the plural. It doesn't look right somehow so I will never do it. Synesthesia to my eyes. Tis an aberration and doesn't sit well in my head. Like Troubadour( male artist) and Trobairitz(female form)that doesn't match up either to my mind. Troubadour should be a unisex description instead IMHO. Whereas actor and actress I'm perfectly happy with...no need to change that around. Just because its a rule does make it right- which is why... I willfully misuse... ellipsis marks... to suit myself ...:o)
Maybe if we leave the EU we will go back to feet and inches... pounds and ounces... yards and furlongs...

Thank you Anabel. It's a truly lovely hill on a nice day, much more elegant and graceful than Meikle Bin with superior views and landscape highlights. Take first track on right past Culcreuch Castle pond (worth a circular walk in itself from Fintry village, around the grounds- castle bar and tearoom open to public) which leads up past a farm onto hillside then when that track fades out continue uphill on easy grass slopes avoiding any crags to summit. Return same way. Carleatheran, its near neighbour, ascended from Gargunnock Village, up track past waterfall(OS map landranger 57. details) is also a fine outing of great variety and views. both 4 or 5 hour hill walks with good paths 3/4 of the way up hillside.

It's that time of year when spring is just around the corner but winter just wont give up- and how if the forecast for the rest of the week is to be believed! I like these two hills, they're a lot smoother underfoot than the Campsies and there's a great view to the higher hills of the north. The trig point on Stronend is something to behold if I remember correctly.

What a superb winter day Bob! The Crocus there are ahead of those in Aberdeenshire - ours are still tightly furled. Got to agree that they're such a welcome splash of colour in early spring :o)

I love that you have flowers blooming already!

We're in that zone now of spring flowers starting to appear while snow still caps the mountains. Off to the Highlands this weekend assuming I can get there through Storm whatever.
That explains why I had to re-approve your comment on my blog last week now! :)

Cheers Neil,
Back to winter again this evening with snow falling at low levels and more expected.

Hi Ian,
They were taken in my garden last week which is pretty sheltered and south facing. They are buried now under 4 inches of snow. A yoyo winter.

Cheers Linda,
It was a nice splash of colour while it lasted. Back to arctic conditions now though.

Best of luck on your trip Andy. I've swapped search engines for the blog and it seems to have fixed the comments problem. Nothing to do with a missing add on at all and everything to do with a new search engine upgrade that has bugs in the system still to be ironed out fully. Which is why I'm usually in no hurry to take the latest upgrades to anything as there's always glitches involved until they get it right.