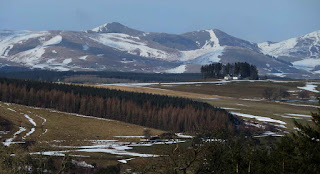 ALL PHOTOS CLICK FULL SCREEN.
A day out with Alex to do a spot of bagging over three small but shapely hills. The view above is of The Pentlands , a hill range running inland from the coastal city of  Edinburgh 15 miles west towards the Upper Clyde Valley region. A high broad valley sits between the Pentlands and the much higher uplands around Pykestone Hill, 737 metres and Dollar Law, 817 metres. 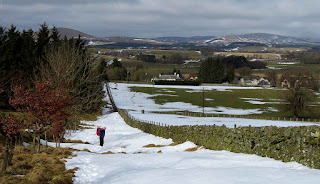 It's a favourite area of mine as it has a quiet pastoral beauty of small villages, large farms and secluded mansions. Alex here at the start of our walk. 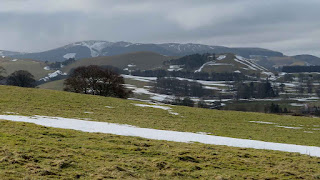 It also has the long distance rolling views and wide open skies of an upland plateau. Locals we met told us the snowdrifts were six to eight foot deep in this region  a couple of weeks ago when Glasgow and Edinburgh had two foot city centre drifts in the public parks. Although still knee deep in pockets the snow had turned into a sugar like softness under the March sunshine and was melting fast. 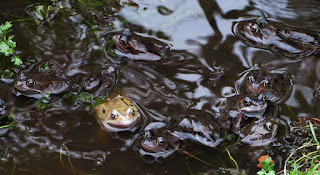 Breeding frogs in a pond. 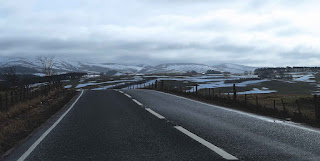 The open road. Smashing empty driving on good unfrequented roads make this area a scenic joy to travel through.

The heart of The Pentlands. 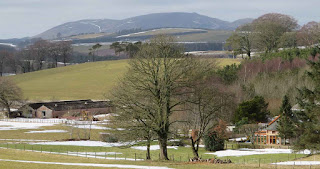 Black Mount.516 metres.  Hills in the western Pentlands tend to be spaced further apart and have a more individual character as separate mountains. 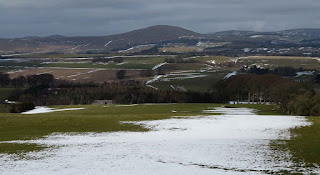 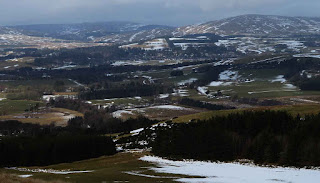 Looking down on West Linton.

The higher peaks remained buried under clouds all day but we stayed in sunshine- one benefit of the lower peaks. 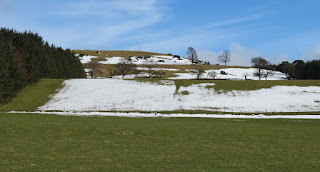 Even some blue sky. 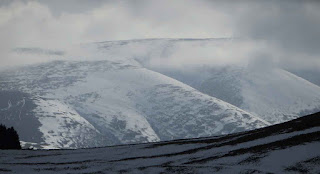 We were both glad to be in sunshine instead of slogging up through deep snowdrifts towards invisible summits. 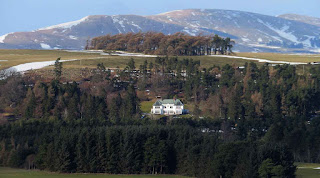 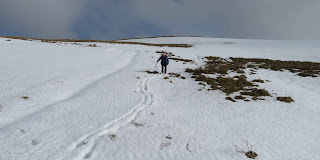 And we still had a snowy descent of 500 feet or so to end with. 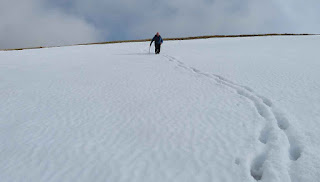 So a spot of snow fun thrown in. A great day out. 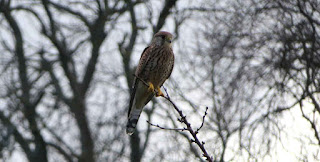 And a Kestrel  on its hunting perch to end.

Speaking of wildlife here's a truly fantastic video compilation of exotic creatures around the world and an underrated fine band who have produced some excellent music over the years to go with it. Animal magic of the highest order and a sweeping epic that really grows on you. Both video and song get better as they go on. Best watched full screen.

You're just trying to make me jealous with these regular hill forays when I'm struggling to get up any aren't you! :-(

Wait til you see the next set Carol. Epic but brutal wind-speeds on some of Scotland's highest hill ranges. I really suffered for those photographs in extreme conditions and came very close to frostbite in my fingertips. Not much fun... except in retrospect, safe and warm again.

Not an area I know terribly well, it looks more than worth a visit. Our one hill venture this month has been Dumyat: mud, slush, and no views from the top. Of course, once we got back to Bridge of Allan the clouds cleared .....

Another great looking group of wee hills Bob - as you say there's lots to enjoy about little 'uns!

Hi Anabel,
The hills we did make a fine walk and the Pentlands in general are excellent hillwalking territory well worth a visit. Several car parks give easy access to them.

I'm really enjoying the smaller hills away from the crowds. Wish that I'd realised earlier in life what little gems there are rather than tramping up the same Munros time after time! The west end of the Pentland's is a really nice area, Black Mount is a superb viewpoint. Still got some others to do around there.

The windchill has been horrific recently! Even bad walking home from work :-( Apparently, even Yorkshire's been 3 degrees C colder than Moscow!

You have many scenic areas in your country! As always, enjoyed the photos, especially the frogs!

Extreme cold doesn't seem to deter frogs from breeding - if its March then thats what you do regardless of the weather.
Lovely majestic views over the Pentlands which you both must have greatly enjoyed.

Beautiful photos, makes me wish I could see it in person.

Enjoyed the video very much. I have really enjoyed learning more about elephants from R.E.S.C.U.E, they are on my Instagram. (Yes, my son set me up on that on that even though I don't know how to do much!)

Me too Neil, That walk, and all the lower hills have been a surprising delight to explore. The week after we were much higher up and it was dangerous/grim/challenging/adventurous
and potentially life-threatening. Enjoyable as an occasional thrill to see if I can still cut it at that level but smaller hills have far less pain and misery attached to their ascent.

Cheers Linda, The frogs come every year now and leave me their children to look after and feed. The joys of having a wildlife garden.

Hi Rosemary,
Amazing the difference in temperature between two weekends. The Pentlands sunny and spring like- the following weekend full polar arctic conditions and a real risk of frostbite taking photos.

Thank you Kay,
I always try to pick extraordinary visual wonders to accompany each post or highlight music people might not be familiar with but may like once they have heard it. Getting them to watch it is a different matter :)

I had a few forays into the Pentlands when my mate lived in Edinburgh but not nearly enough. They always looked like a very fine range of mini-mountains

They are a scenically beautiful and diverse hill range Andy and we still have summits to do there despite many previous outings. Popular and shapely near the Edinburgh end- wild, monolithic and empty in the western quarter. A dream date for hill-walkers and so lucky to be within reach on a day trip by car, bus or train.