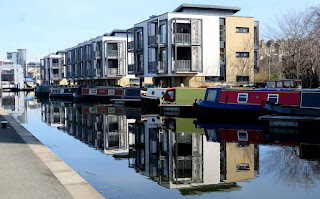 ALL PHOTOS CLICK FULL SCREEN.
Edinburgh's Union Canal at its end point at Edinburgh Quay. A nice spot with watery reflections on the canal, a few restaurants and bars/coffee houses and a line of boats. When I said in the first post Edinburgh hills revisited it was marking the fact that I'd been up them before but usually on separate day trips over the past decade- never in one go. I was more than happy to do them again and the fact that most of the walk would be new and fresh to Anne was more than enough for me. 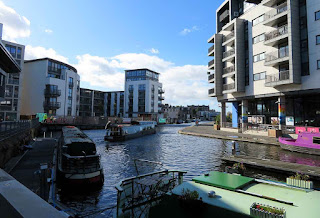 In the post last week I mentioned 'Round Tower Land' in this area so here's a few examples around this canal basin district. 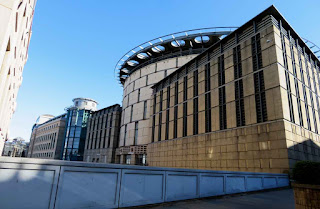 Glasgow has hardly any modern round tower type buildings and the ones that do exist are spaced well apart. It was noticeable in this area just how dominant and concentrated they were... hence- the round tower land labelling by me. 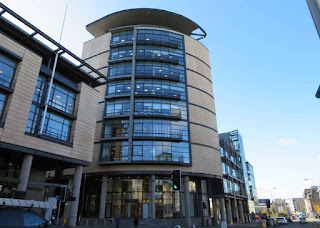 But throughout the city it's a favourite theme on buildings here. 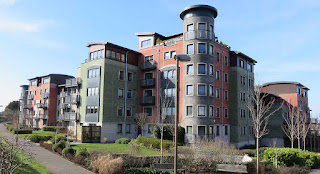 Even on newer residential properties. Until I started doing the blog I never fully realized just how different Glasgow and Edinburgh were, architecturally speaking, and why they evolved that way in the first place. West and East coast sea ports are the answer. Edinburgh always traded with Europe and the Low Countries- Glasgow with America and it shows in the architecture.
The main reason Glasgow had its immense period of growth, almost doubling its population every decade for a while and turning it into the UK's second largest city by the early 1900s with over a million toiling souls was it's lucrative trade with America, an influx of workers from the impoverished Scottish Highlands and Ireland plus its strong heavy industry base offering them tough working conditions but a hopefully brighter future. 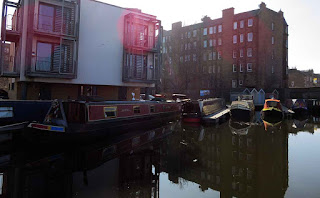 By a lucky stroke of landscape and tidal currents plus stronger reliable winds sailing ships from Glasgow, the HGV's of their day, could beat east coast London based vessels by a full three weeks, travelling to the USA or Canada. Edinburgh had no hope of getting there at all, having to go via this canal, ruling out any sea going cargo ships, or sailing right around the north of Scotland- hundreds of extra miles and treacherous waters to cross. Even London had a 500 mile disadvantage before they  started that trip across the Atlantic Ocean. Liverpool fared much better but being located halfway up the country Ireland was in the way of hopping across in a straight line, a sizable land mass stretching from Islay in Scotland to Swansea in Wales. Not enough to stop them going and doing well out of it but still not the fastest dog at the racetrack. One pleasure of doing a blog (for bloggers themselves) is a free education if you have any kind of inquiring mind when you travel.
Being the Scottish capital (Edinburgh that is) with close ties to the EU the eye catching round tower in Strasbourg springs to mind here as a possible inspiration for 'round tower land'. The 60 metre high Louise Weiss building reputedly based on the Tower of Babel is the HQ of the European Parliament in that French city... also the European Court of Human Rights is based there, another round building very similar in style to these, except built slightly earlier than here. Just a thought that occurred while walking along.
Glasgow, during its growth spurt, ended up looking more like New York, until fairly recently The UK city with the greatest number of hi rise apartment buildings. Both cities, New York and Glasgow may have influenced each other with a regular sailing connection established over a long period of time to absorb each others culture and styles. 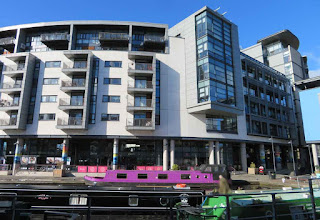 Anne meanwhile was just enjoying the views and the fine weather so we walked for a few km along the most interesting stretch of this canal, as usual my good self cherry picking the best bits of Edinburgh for her with my hard earned knowledge over years of visits. 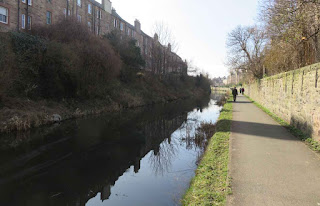 Young Adam, a Ewan McGregor film, is a dark study of a mean spirited drifter and sexual predator prowling the canals of Scotland who ends up a possible murderer. While I wouldn't recommend the film as a happy watch in any way ( brutal and intense.18plus rating.) it is one of the best I've seen for depicting canal life as it was, set in the early 1950s when canal barges and families still made a living shifting goods along the network. Over the years since I've watched it, mainly on cycling trips, I picked out all the location canal shots in it except one, which remained an illusive mystery I could never track down. This is it here and Anne immediately recognized it as she's watched the film as well, the last time fairly recently. High tenements on one side, long straight wall on the other. Bleak in the film, as it was a city of tall warehouses, grime, smoking chimneys, labour intensive industry and large factories back then- sunny and peaceful now. Amazing how much the world has changed in 60 years, before the age of regular affordable plane journeys for most humans when the planet was still unbelievably vast in size and not just 3 days away.. 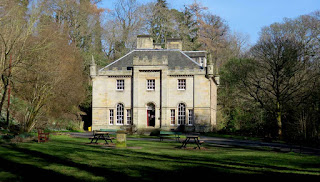 She enjoyed her walk along the canal but unbeknown to her I was watching carefully for our cut off point as the canal would lead us out of the city eventually so I was looking for a particular street that would lead us up to our next destination. As planned Merchiston  Avenue led us out at an angle to a bus stop on Church Hill where we boarded a bus for a couple of stops then alighted under our third hill of the day.
The Hermitage above. 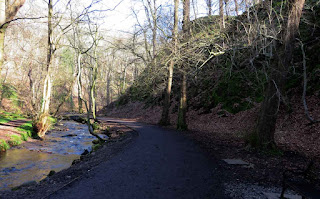 Most folk visiting Edinburgh already know about Arthur's Seat but Blackford Hill and its adjoining gorge walk, the Hermitage of Braid, are less frequented, although still popular. It's a delightful open area of woodland, grass meadows, park pond, rugged gorge, cliffs and summit views... eventually topping out at 539 feet. 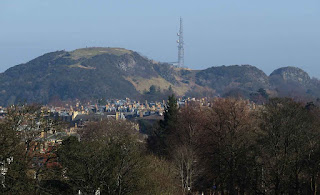 Anne had never explored this area either so was still keen although getting tired as we'd been walking for hours by this point. 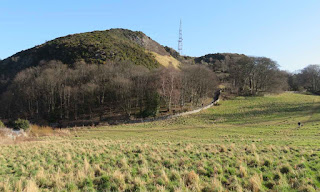 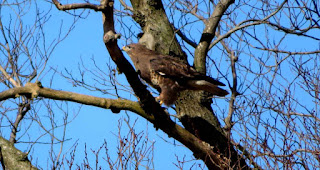 And a buzzard higher up. 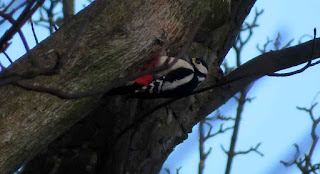 A close up view of a woodpecker was a real bonus. 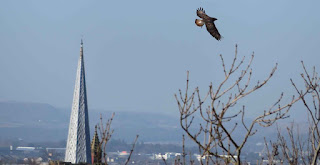 And the same buzzard flying over Morningside Church spire gave us a boost to the top. 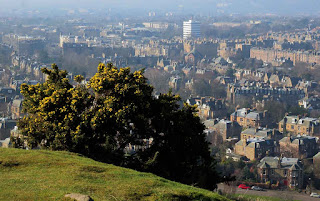 Views from the grassy broad summit of Blackford Hill over the city are usually a feast for the eyes and this day was no exception. By now it was mid afternoon and warm so we sat up here for ages, people watching other visitors nearby and below, taking in the panoramas and then reading. Her a newspaper- me a new book. 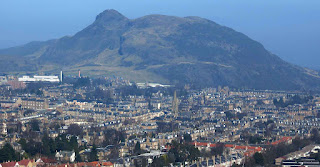 There was a bit of a heat haze in the muggy air but distant views were still not bad. Arthur's Seat here. The highest of Edinburgh's seven hills. Named after 'King' Arthur, he of Camelot fame. 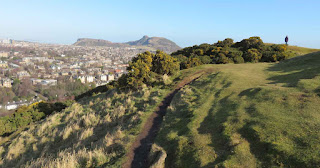 As it was so peaceful we sat up here for several hours and had a lazy long lunch in the sun. Anne even got chatted up by another summit dweller as we spent quite a lot of it apart: me taking photographs and moving around the hillside exploring everything, her partly stripped off, comfortably static, topping up her tan. Thankfully she didn't disappear with her new boyfriend and stayed put. I did have my doubts :) 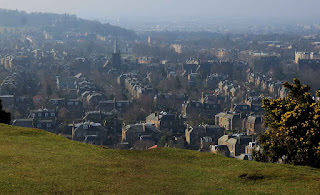 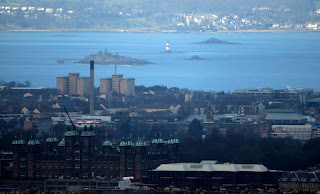 Islands in the Firth of Forth. The sort of heat you just lie down and dream dreams into... 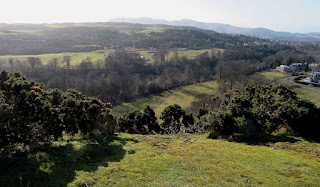 One thing that surprised me about Edinburgh before this trip was the headline that it was one of the lowest density city populations for its overall size. And the greenest. A surprise because walking in the old town through its tourist laden streets or viewing the urban areas from above it always seems such a densely packed jumble of buildings without many parks or woods within it. But the hills are the parks and being high and rugged with frequent small cliffs have not been built over yet. Only when you are up here do you realise how much open land is available within the city boundary. A view of the Braid Hills here, above, from Blackford Hill summit.

And another looking back over Blackford Hill towards a distant Arthur's Seat. It was this vast expanse of empty land sitting within the city boundary that I intended to take advantage of next.
To be continued.....

Anne's choice of video this time. Sorry, no Bryan Adams. No way.
But as an alternative song I also like.... here's a modern classic- with clever visual imagery. And a great catchy tune. Venus and Mars.

What interesting buildings. And I love your photos of the sweeping city views.

That is a wonderful walk especially along the canal with those great reflections.

Fascinating! Lots of interesting things I didn’t know about Edinburgh there.

Cheers Linda,
It's a elegant city when viewed from above- loads of church spires and towers.

Hi Rosemary,
I have no idea how those elite fell runners can get round all seven hills in 4 hours. Even walking the route we found the city streets tough on the feet.

Hi Anabel,
So far I'm still inspired by Edinburgh with new areas still to visit. Just back from another trip there although the festival made it very busy on the buses and Princes Street was heaving. Luckily, I stayed in other outlying districts all day.

What a superb, varied post and walk. So much of interest there. I love a view over a city from a high point. I didn't realise that I knew that song until I played the video!