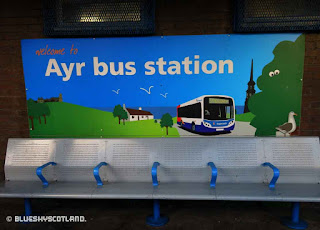 Still in the west coast seaside town of Ayr.   As I had not explored Ayr on foot for at least ten years and some of it was barely remembered while other parts had changed considerably I still had a lot of exploring to do here. Above is Ayr Bus Station, hub for around 8 to 12 buses at a guess. Some of these bus stations, like Perth, are hidden away on an obscure side street, sometimes a fair old distance from the main shopping area so I always take good notice of my surroundings now to find my way back in the dark. Surprisingly easy to miss them at night- in the case of Perth. The last thing you want after a hard day's walk is a search for the bus station.

As reported in the last post I made for the town harbour but I've been to Ayr a few times now since Christmas so this is a different walk. 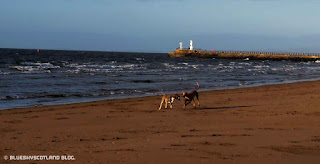 This time I went the other way along the beach in the direction of the pier and harbour entrance. Fighting dogs come as standard extras here. Book them early to avoid disappointment. 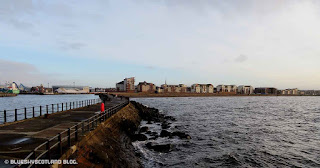 View of Ayr and harbour looking back from the pier. 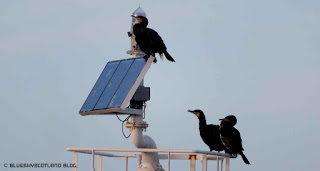 More cormorants at the pier end. 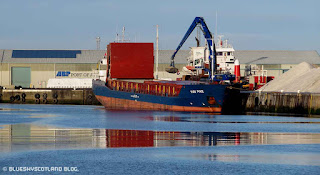 Like a lot of seaside towns in the past, when boats carried most of the trade goods, exports and imports, Ayr Harbour used to be a vibrant busy port with dozens of vessels plying their trade from here to the Scottish islands, England, Ireland, America and beyond. Now its mainly a few cargo ships delivering building materials like this one here. Low in the water at one end as the hold is still full.

A range of housing stock had been built along the seafront since my last visit but I did wonder about this high brick wall in front blocking the sea view from the ground floor apartments. I couldn't see a purpose for leaving it up. 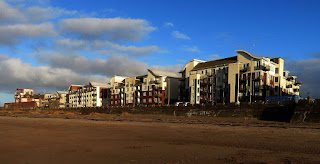 You can see the wall height better here on the far left of the photo. 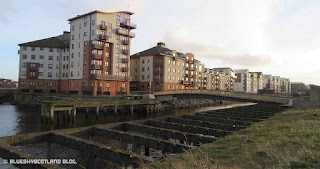 But there was a reason for it as it was part of the old docks, no longer in use. 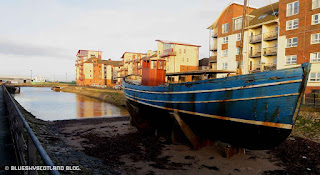 South Harbour... and at its far end the 'Watchful'. A herring fishing boat originally from the Maidens, a small coastal community further south near Culzean Castle. This old boat was repainted and restored in 2010 but it's in a bad way again almost ten years later, after being exposed to winter storms, salt and spray. 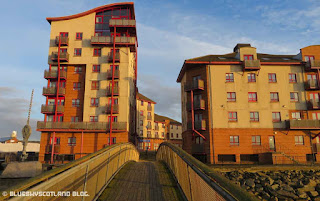 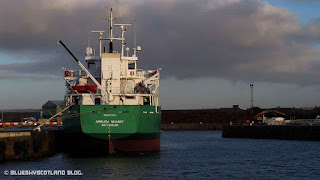 Back view of a second cargo boat. 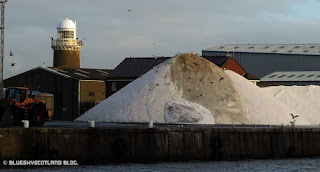 Unloaded materials at the port. 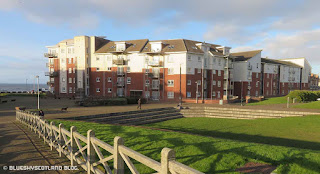 The seafront houses from the rear. 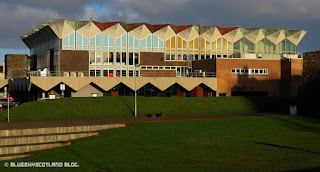 And this strange building... which reminded me of a modern castle and sunken moat design in many ways.
I soon found out it was the Citadel leisure centre. And it may well have been modeled after a castle or fortress as Ayr was a major garrison town during Oliver Cromwell's brutal conquest of Scotland in the mid 1600s. Where the citadel leisure centre stands today was the barracks for some of the army of occupation in the vicious wars between Scotland and England. 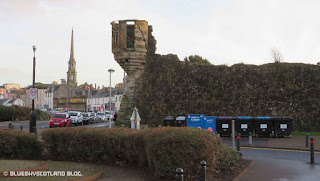 And right beside the leisure centre and swimming pool is what remains of Oliver Cromwell's original fortress. The 1600s Citadel. 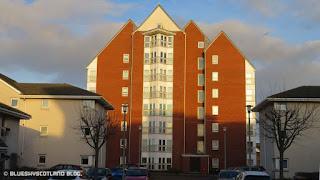 I also fancied this modern building was an architectural nod in some way to the nearby St John's Tower, a 15th century soaring beauty that still stands proud above the surrounding houses. But what came first I wonder? Oasis or the Beatles... Madonna or Kylie... Elvis or Cliff Richard... Tori Amos or Kate Bush? All perplexing mysteries to solve for a modern young human. 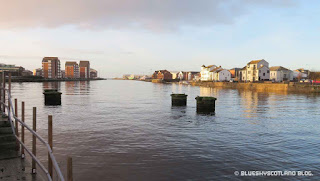 A view from further up the River Ayr, looking back towards the harbour. 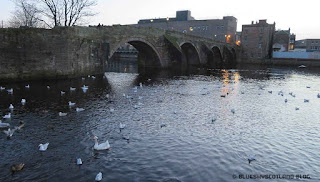 The town's famous 'old brig' with a stone core dating from the 1500s although it has been renovated and strengthened several times since then but still a remarkable structure which transports thousands of  pedestrians over the river into the shopping district to this day. 500 years old- if stones could recite memories think of the tales they could tell. The poet Robert Burns may well have crossed this same bridge seeking out a pub or a new sweetheart to spend an evening with. In Burns day, by the mid 1700s, it was already well into its second century of use spanning the river. And well within walking distance of his house a few miles away. 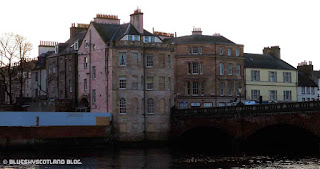 Ayr has a long history as a community and from this angle you would never guess buses and cars run across this bridge before disappearing between the walls. Two lanes of traffic yet it looks like a solid stone barrier with no gaps. 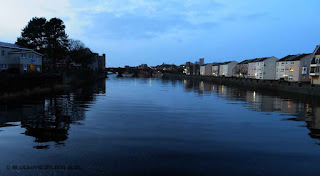 Upstream we start to get into a more placid reflection zone. 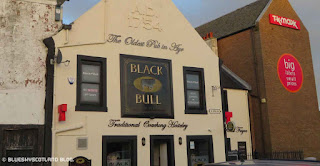 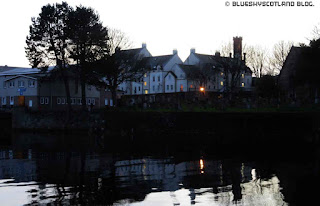 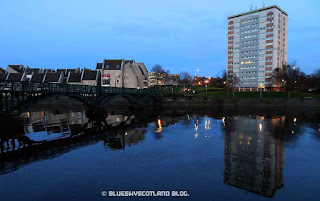 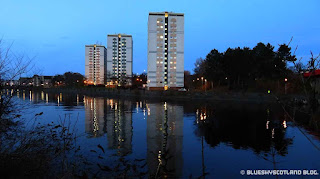 More reflections. Getting on for nightfall. 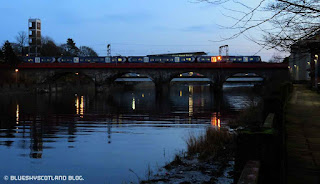 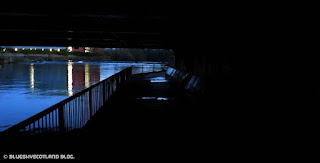 Ayrshire College. At this point I headed away from the river and into town to see the Christmas lights and shops.... to be continued.

Richard keeps wanting to go to Ayr (he's been before) but I have to say I haven't managed to raise any enthusiasm myself. I suppose it's because it doesn't have a hill!

Nice. Not a place I have wandered about much, though we visit Ayrshire reasonably often. Just not Ayr!

Hi Carol,
You could buy another reasonable second hand car for that money. I hate MOT's as well.
Ayr does have a fantastic coastal walk which I'll feature in a future post.

Same here Anabel,which is why it's like a new area now. Funny how we have both avoided going there when it's only an hour away by car or bus. Must be the parking issue history or something.

I have not visited Ayr for a great many years, and I don't recognise any of it from your photos, but perhaps my memory is now rather jaded.

I love my Sunny and wouldn't part with him. For a start, they really don't make cars like that any more. Virtually never needed anything mechanical doing despite going around the clock nearly twice now - just rotten bodywork unfortunately. Also, he's my camping car (as in sleeping in the car) on trips. Modern cars aren't as roomy or comfortable nowadays - nor do they have my capacious boot (biggest ever I think)

Hi Rosemary,
a couple more posts to go on Ayr so maybe you might recognize something but I may space them out with something different between them just for variety.

Hi Carol,
if it's a him he's probably got a name. Or is it just Sunny... and Cher :)
Electric windows are a big con in modern cars- great when they work but expensive to fix when they don't. I'd rather have manual wind up ones in older cars.