Got this idea from Anabel, a fellow blogger at TGG, who posted about Window Wanderings which is sweeping the UK at the moment.Thank You. She posted images of illuminated windows in the Strathbungo district of Glasgow where a community of residents decide they are going to decorate the windows, either for one day or a weekend. As Maryhill Park is not far from me, over on the north side of the city I decided to turn up last Sunday- a short drive in the car- to catch the action. It started in Bristol apparently but has now spread to other places, like a Mexican wave, in a modern stained glass extravaganza of colourful ideas to brighten the long winter nights. 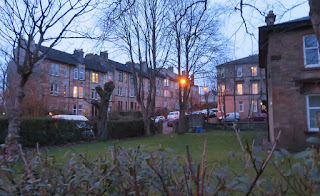 ALL PHOTOS CLICK FULL SCREEN.
Maryhill Park is a district of quiet streets beside Maryhill Park itself and the reason why I know this is due to the fact I've cycled through here several times on bike tours taking in Bearsden, multiple city parks, plus the Kelvin walkway, following that river out into the countryside in a green ribbon circular tour. So I knew it was handy to park here. 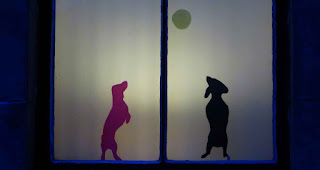 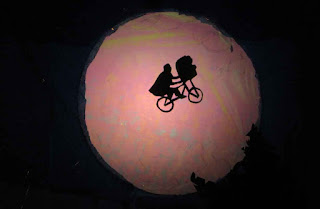 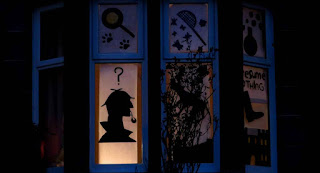 Sherlock on the case. 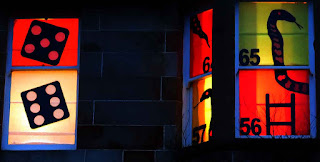 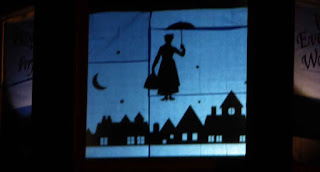 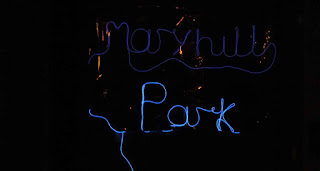 or just a flash of illumination in a dark garden. 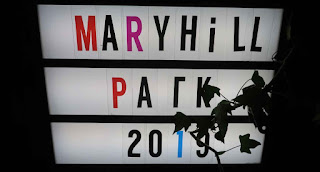 in a range of styles. 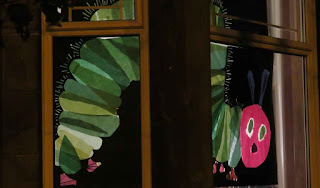 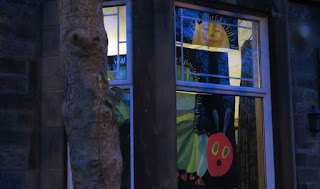 Children's books and films seemed to be a favourite topic. (Found out later it was The Really Hungry Caterpillar, an illustrated book by Eric Carle.)

And as I had just watched Jurassic World on TV recently I knew what this was- although I don't remember velocirapters using  a sofa as a springboard in that film. A nice artistic touch. 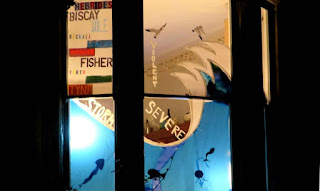 Some of the designs were very elaborate- showing skill, real patience, and creativity. Shipping Forecast here. 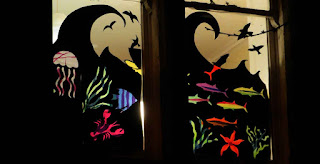 Or the deep ocean. 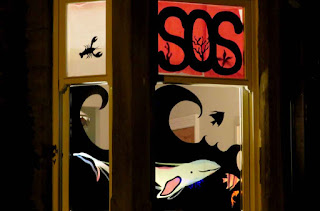 Or conservation themes. Funnily enough concerns for plastic in the oceans seems to have reached a larger mass audience now, " a trend" capturing the zeitgeist if you will in the public's imagination, yet it's been really obvious for decades now on beach walks. Same as global warming/climate change/ something not right with the weather.... was obvious 30 years ago to anyone wandering in the UK mountains, Arctic regions, and the like as hill-walking clubs, beachcombers, etc would be among the first non scientific groups to notice changes on a weekly basis, by going up high month by month, year after year, from vanishing snow packs and increasing rubbish on beaches. Better late than never.

I'm much more concerned by the imminent loss of cash in the UK and worldwide- paper/ plastic notes and coins. It may be more convenient for some but the ramifications are huge. I can see why governments and big business want it...- a no brainer for them.... far greater control over every aspect of people's lives, gathering every crumb of information possible on you from birth to death... forever- which is what the internet is rapidly evolving into- a huge spy and propaganda machine. Not to mention the millions of jobs wiped out for folk collecting and counting cash, security guards to watch money, transaction services, the elderly, people that just like using it etc- to be exchanged for what----- jobs handing out paper towels in toilets, delivering meals by bike, pushing buttons in an office every day, or washing endless lines of cars. And what if the electronic services go down, either through hacking or something more unpredictable, like a solar pulse- what do we do then? It's sensible to keep cash movement as a back up at least for folk still wanting to use it, I certainly prefer it for most small everyday items but we may not have a choice in that. Smart technology increasingly monitors every movement you make, indoors or out, every purchase, every trip, gathering personal info, your beliefs and opinions, how much money you have or have not, are you susceptible to advertising, easily intimidated/bribed/deceitful/honest- all data that can be collected, stored, sold or used. An intrusive KGB society by the back door. 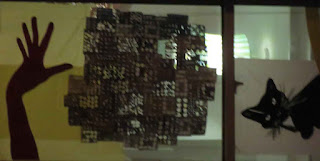 This one was less obvious however and I had a good think about the topic while I was wandering around. Only thing that came to mind for this design was ' Schrodinger's Cat' maybe? Which was a bold choice if that's correct, as not everyone would get it. Brilliant though.
https://www.telegraph.co.uk/technology/google/google-doodle/10237347/Schrodingers-Cat-explained.html

I think this was also from the same house, or thereabouts, but I'm not bright enough to work this one out... or am I  :o) 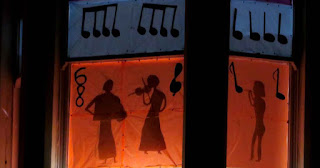 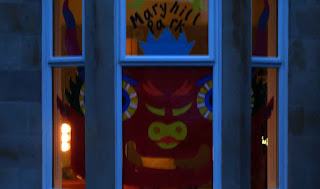 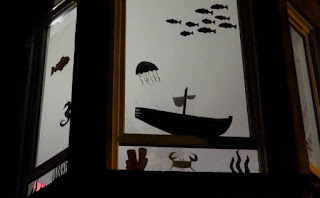 Sailing theme. I probably missed a few as this area had offshoot streets and cul de sacs I never went down ( there was a map online showing where to find the decorated windows) but I enjoyed the experience anyway just wandering randomly. And the night was still young. As I was now over in Maryhill, during the hours of darkness, with a camera and an entire new area to observe in the shadows the urban adventure was only just beginning. City canyons called me upwards towards the neon stars and I ascended eagerly, like any true explorer would.. To be continued...

Never heard of that before (the window decorating craze) but it's pretty fascinating by the looks of it. How do they decorate them though? sort of coloured plastic or paper or something? Or does it vary.

There are quite a few petitions to sign about keeping cash but I'm sure they'll phase it out whether we object or not - might just take longer if everyone resists. It's not so much the control element which scares me but two other things: one is that our society can easily be brought to a complete halt by hostiles by the hacking thing as you mention. The other is that you will HAVE to have a bank account and they will be able to charge you interest for keeping your money in it - a lose-lose situation for us all! Especially those with less money.

And, being a hillwalker, I agree we were among the first to notice climate change. But it worries me nowadays how people have turned completely against the theory and are just seeing it as a way for the Government to grab green taxes.

The window with the caterpillar? That is from "The Very Hungry Caterpillar" by Eric Carle. One of our son's favorites, he is an American author of children's books and a very good one. (He does the drawings too...Eric Carle, I mean, not my son! LOL)
I also did not know this (about the window decorating craze) but I do like it. Thanks for telling me about it. When I see it on the BBC, I will have already heard about it here!

Hi Carol,
if you goggle Window Wanderings there might well be an event near you in the next couple of months before the winter ends. It does vary depending on materials used. I'm just naturally wary of any big changes in society. It's all focused on Brexit at the moment but losing real money is a major element as well. I always like handing over cash for most things I buy and numerous studies have found you spend more and are more inclined to go into debt if you pay everything by cards without handling cash which is what businesses count on and why they are so keen.

Well spotted Kay.
It is indeed TVHC by Eric Carle, not a book I'm familiar with so I looked it up. What made me think of Alice was what I thought was a grinning Cheshire Cat above the caterpillar ( see my added photo) but it could just be the sun or a character from the same TVHC book as it's in the same artistic style.

These look great! After enjoying Window Wanderland in Strathbungo the week before we thought about going to this one too, but wimped out. It was such a wet night! We’d already got soaked coming home from friends in the afternoon so decided to stay in the dry.

Yes, That's why I left it until the Sunday night. Not many folk about then, only a handful, but it stayed dry.